I’m a big fan of the modern XCOM games. They mix the right amount of difficulty and strategy whilst ‘dumbing it down’ to a point where you lose a lot of the faff and it works well on a controller. Phoenix Point comes from the creator of the original XCOM, which I’ve only dabbled with. They were more complex affairs so, as you’d expect, this new release on PS4 takes some leaves out of the modern iteration’s books but also tries to introduce a little more complexity.

You take control of the titular Phoenix Point, a cell of the Phoenix Project, a once strong organisation which you must rebuild with only one airship, a crew and a barely functioning base of operations. It was created to aid the world in a time of peril and with the Pandoravirus mutating humans and animals alike, emerging from the sea and engulfing the planet with a terraforming mist, that time is now.

This isn’t the beginning of an invasion though, things have already gone to pot with humanity spread out into small colonies belonging to different factions. You explore the globe in your airship looking for contacts, materials and new squad members whilst helping or hindering the factions. Each faction is less than friendly with each other so helping one will annoy another but it pays to keep them on good terms for trading and the research they can share with you. Or you could just raid them with similar results. 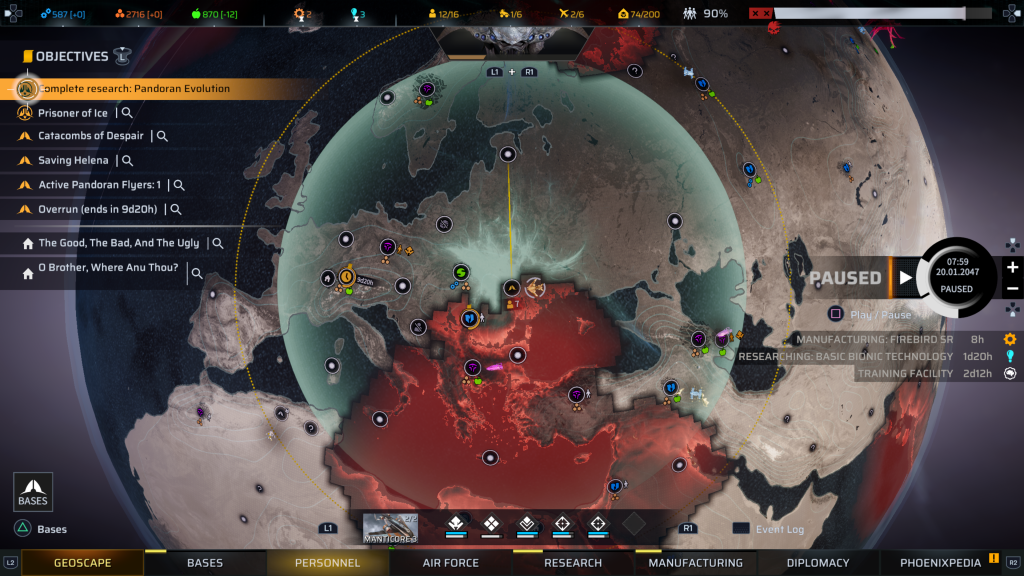 This gives an almost Civilization feel to the world map, as you expand outwards, creating new bases to increase your productivity and contacting colonies. Researching new weapons and armours are important as well as producing them and the ammo required to use them, which takes time. You’ll be given story missions to tackle as well as optional side missions which will give you rewards like tech, materials and food. Story missions can involve researching, building a certain facility at a base or going to a specific location which will generally involve a battle.

Here players of the modern XCOMs will feel familiar, but there are quite a few differences as well. General movement controls are the same as you move in a turn based fashion on a grid to hide behind cover and take up safe positions to hopefully line up a shot at the variety of enemies you’ll face. Unlike XCOM, where you’re limited to two actions, in Phoenix Point you have four action points and movement is more analogue than just using one action point, but firing requires a set number depending on the weapon in use (two for an assault rifle, for example). 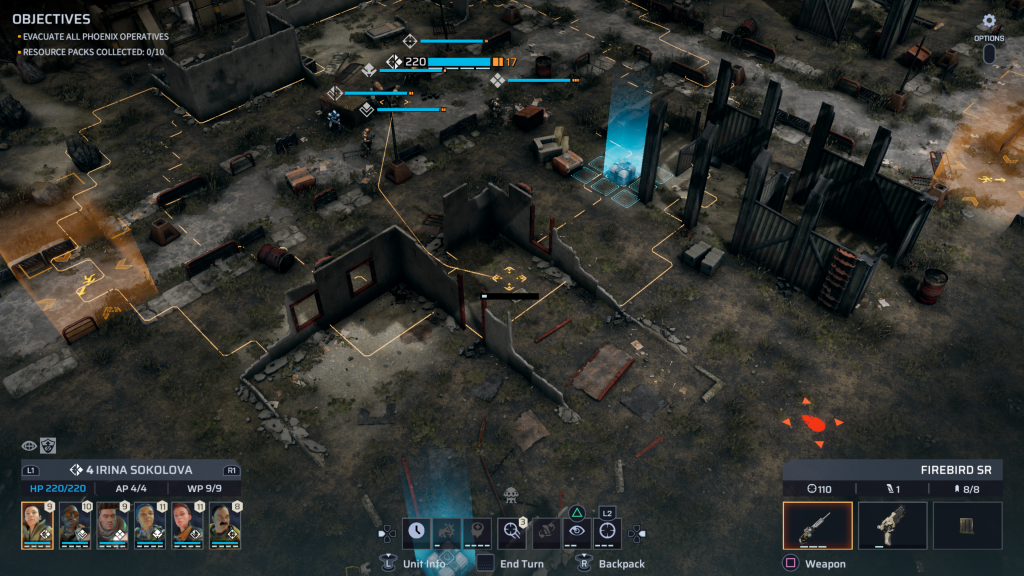 It’s a flexible system allowing you to move very far or hold you position and take multiple shots as well as using abilities which you can unlock through levelling up. These use willpower which enemies can also attack and if a character runs out of willpower then they will panic, costing you a turn. The other major difference is that when you aim there is no percentage chance of hitting. There is a bar at the top of the screen that will show the potential damage you’ll do to an enemy and/or you can actually free aim and target specific parts of the body for different effects.

Weirdly, despite the vagaries of a percentage chance to hit (unless it’s 100% or course) I actually prefer that to Phoenix Point‘s method. It’s more realistic, sure, with parts of the environment blocking shots and bursts of bullets will have some hit and some not, but in the same vein you can think you’re in good cover and then an enemy sniper will be able to get a shot on your head as it’s sticking out. It’s the difference between the hard and fast rules of XCOM which allow you to plan and make the choice as to play it safe or take a risk and Phoenix Point‘s more realistic but less predictable, thus harder to strategise, combat. 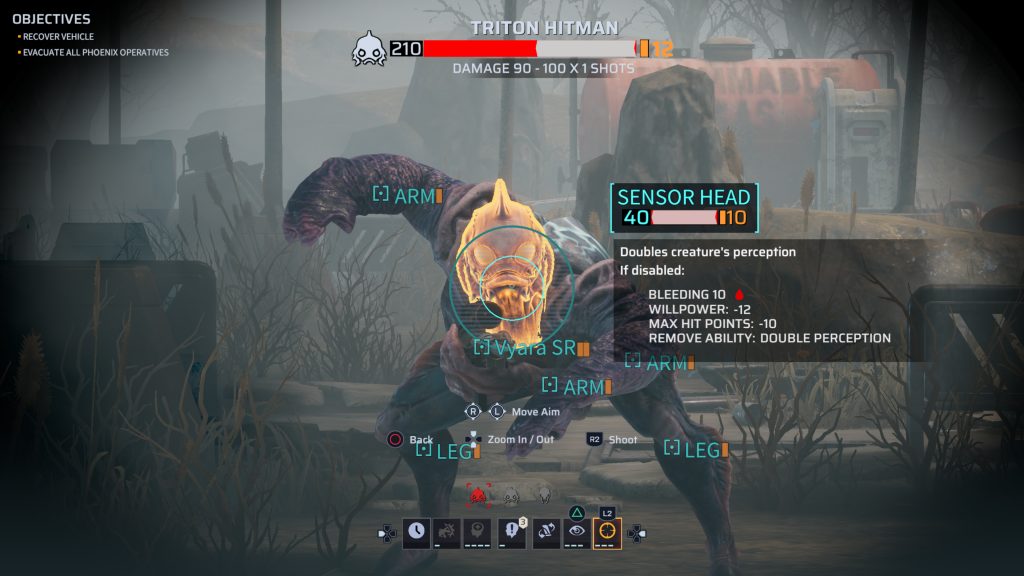 There are a few different mission types to help with the variety. At it’s most basic you’ll have to kill all the enemies, or survive some waves of enemies before running for an extraction point. Beyond that you’ll have to rescue soldiers, collect a vehicle or interact with specific targets. There are a few different environments as well but you’ll start to see familiar ones pretty quickly.

Enemy variety on the other hand ramps up pretty quickly. Even the basic enemies come in different varieties and it does keep you on your toes as the more basic enemies learn to use weapons to counter you. They aren’t the most exciting designs, lacking a little in the personality department which make them less intimidating, but there is a decent mix. 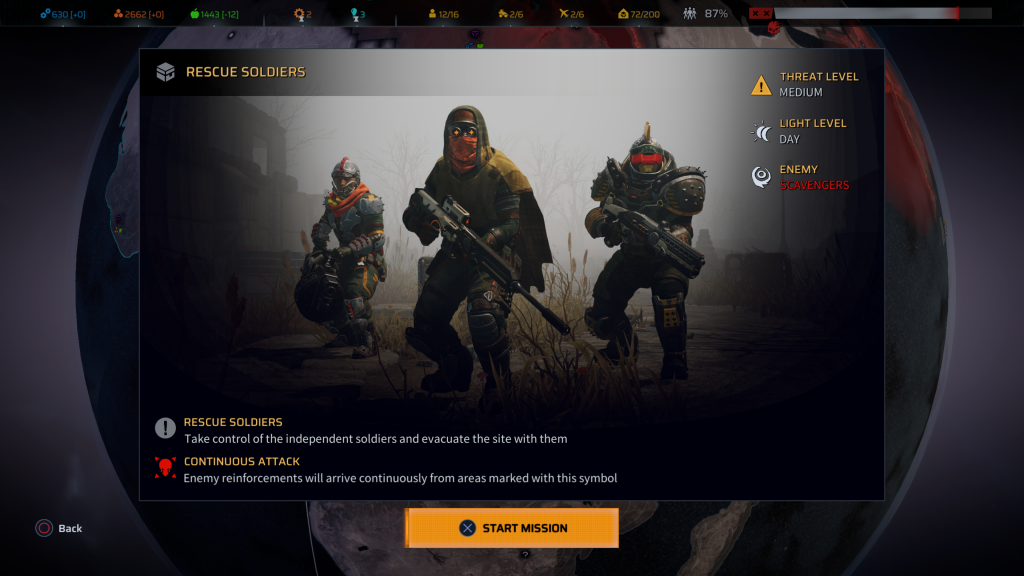 Everything is here for fans of the strategy genre to get their teeth into. I personally don’t feel like the additions and changes made to the modern XCOM formula improve things, but if it was exactly the same then I guess there would be no point in playing it as we have two incredible XCOM games already. The PS4 release also comes with all the updates and DLCs built in, which is very nice.

It runs reasonably well, with the controls tackling the combat, map screen and menus well. Loading can be slow as can switching between menus with the shoulder buttons but apart from being able to scroll off the bottom of a list back to the top but not the other way around (why?) it’s implemented very well. One issue I did have was when pressing

to acknowledge pop ups, which can be tutorials, interactions with colonies or mission result screens. Quite often I’d press it to get rid of one screen and it would remove the next screen as well, which probably contained some important information of some kind. It was irritating every time. 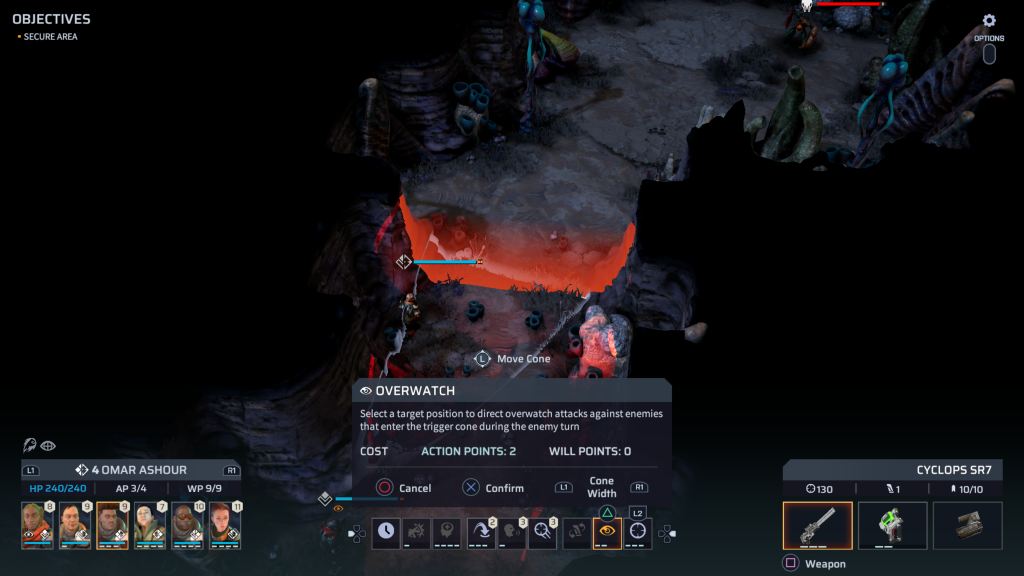 Phoenix Point offers a different take on a genre of game that has seen a new lease of life in recent times. It makes some changes to differentiate itself from the pack which adds some depth to proceedings but at the cost of some tactical predictability. If you’ve played XCOM and XCOM 2 and their DLCs to death then this can definitely scratch a similar itch, just don’t expect it to surpass them.

Phoenix Point
7 Overall
Pros
+ Makes some interesting changes to the formula
+ Runs and controls well
+ Some added depth to each element
Cons
- Not all additions are for the best
- Enemies lack personality
- Long load times
Summary
Phoenix Point resembles modern day XCOM in many ways, whilst introducing extra complications here and there. I prefer the XCOM approach personally, but those little tweaks and additions make it a legitimate alternative for fans of the genre.