One of the things I dread in this job is having very little to talk about. Shorter games do find their way to me but, for the most part, they’re manage to inspire discussion. Even visual novels, a genre loaded with brief experiences usually manages to provide enough ammo for debate. Unfortunately, I’m finding it really hard to write about Takorita Meets Fries.  Roseverte have developed this incredibly abrupt effort. 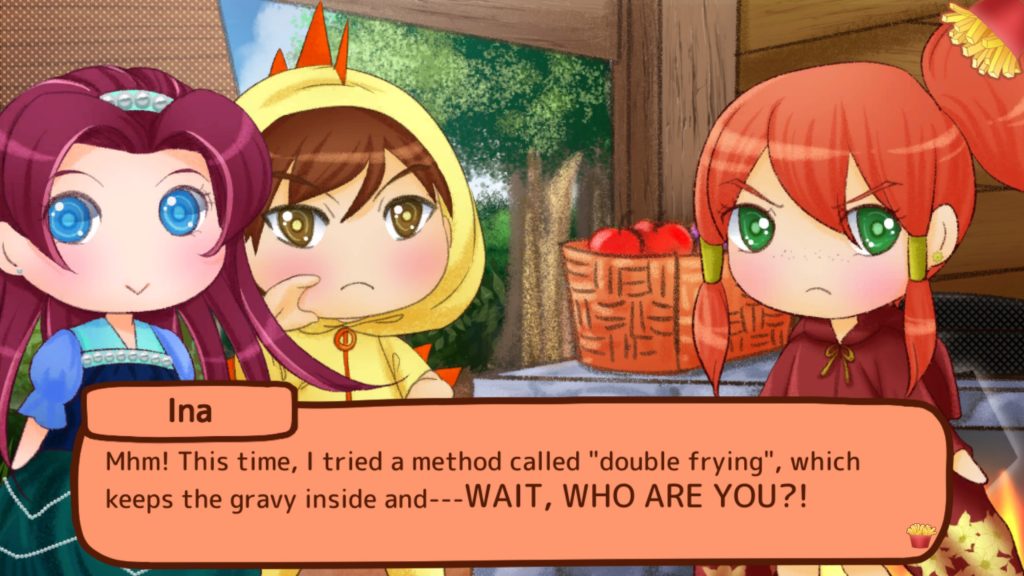 Ostensibly, it’s a visual novel you can comfortably beat in a half-hour lunch break. It consists of four chapters with are over in minutes. It’s a game so brief that the story can probably be summed up in a couple of sentences. As such, I’ll just hammer home the initial premise. Takorita is a Princess from an underwater kingdom. She loves to eat but she must have a bland diet as she ventures above the surface in search of new foods to try. She’s not going it alone with her sidekick Mermer coming along for the journey. It’s framed as an adventure but, in reality, it’s just an event. An event told entirely within the title of the game.

Say what you will about the content of visual novels, they at least go places. Any side-plots or intrigue Takorita Meets Fries has in the chamber is immediately resolved. Chases last seconds, trials and tribulations are mere inconveniences. It’s all very sudden as our protagonists land, meet the locals and then settle down for dinner. The structure just seems so bare. It doesn’t feel like a story worth telling. At best, it’s a prologue for something more substantial. 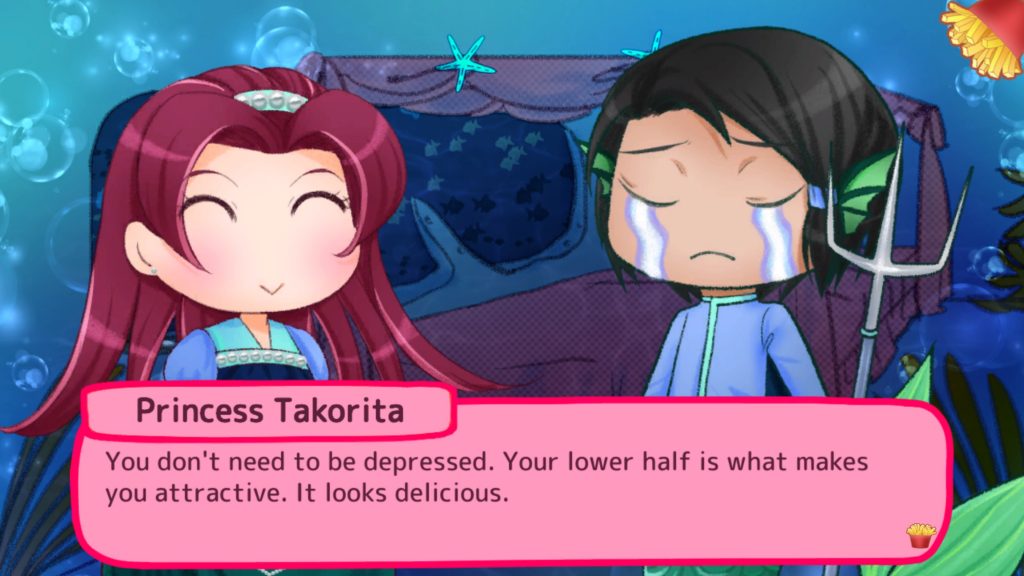 The look is enjoyable. It’s colourful and cute with the writing trying plenty of humour and mostly landing. Some of the script certainly seems hampered by translation but there’s heart to it and feels skewed perhaps to a younger audience. The cast are relatively memorable, considering how little time they get. Takorita’s enthusiasm shines through and there’s a little touch of intrigue with her familial ties that don’t really get covered.

The presentation is really lively. It’s predictably loud and occasionally frantic. The music melds with it well and and it does give your ears and eyes something to enjoy. It’s a shame there isn’t more substance to the story because this art style and music could did well to hold my attention. As it is, this is really just an appetiser for something more fulfilling. 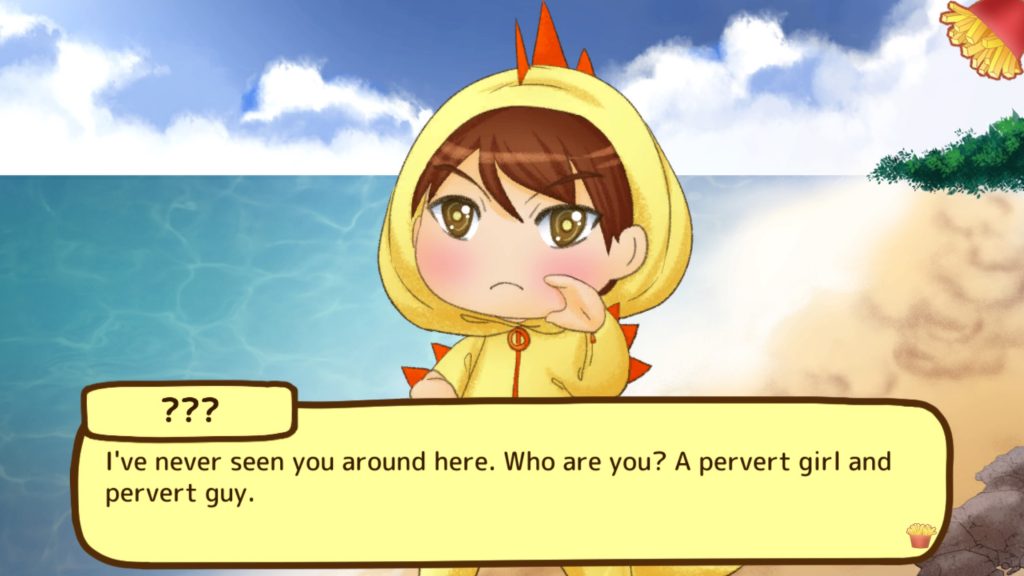 Unfortunately, it’s so short that nothing really has a chance to settle or develop. You’re given a roadmap at the start of every playthrough and, whilst there are two distinct branching points, you can fly through Takorita Meets Fries. I rattled the platinum out in over an hour. After seeing the different endings, they vary but in a fairly minor way. The decisions you make ultimately lead to a variation of fries, rather than uncovering more story.

I could argue it’s more wholesome than some genre contemporaries. This almost feels like a tiny children’s tale. Sadly, that doesn’t give me much to write about. Whilst it doesn’t end on a cliffhanger, there’s certainly a feeling this is the first chapter in a much larger story. The end comes abruptly and leaves me unsatisfied.

Takorita Meets Fries
4 Overall
Pros
+ Cutesy, lively presentation.
+ Jaunty soundtrack.
+ The script is wholesome and funny at times.
Cons
- Far too short to recommend.
- Very light on choice and decisions don't offer much new in terms of narrative.
- Any intrigue is quickly resolved or dangled as an unsatisfying cliffhanger.
Summary
I've said all I can about Takorita Meets Fries. My biggest fear is to be shown a game I can struggle to talk about. This culinary non-adventure has so little on the table that it's hard to recommend. It certainly feels geared towards a younger audience but even children have higher expectations. The incredibly brief narrative leaves me completely unsatisfied and the impressive presentation can't really save it.