The platforming genre has been seeing a bit of a shot in the arm recently. While the AAA development space has all but ignored the genre as a risky write off, Indies have kept it alive as some sort of Frankenstein-ish experiment. This has led to some impressive titles such as Braid and Limbo with innovative takes on the classic gaming stalwart. Of course, however, there are those that come along to simply exist as part of it and while innovation is not necessarily a prerequisite to the genre’s success, reinvention is one of those factors that keeps things fresh. Shiny by Garage 227 tries to be one of the former, however falls flat at almost every hurdle.

The story is basic and there is little to remember. Humanity has left the planet with all its robotic creations left behind as powered down husks of their former selves. You play as Kramer 227, one of the remaining robots whose task it is to run, jump and collect parts for a spaceship of his own to escape the dying planet, while rescuing broken down robot friends along the way. This is not to say that the lack of a story isn’t welcome. The opening cutscene is a slow and empty drawn out sequence with no dialogue or substance, so the lack of an ever-present narrative is not something that I missed. 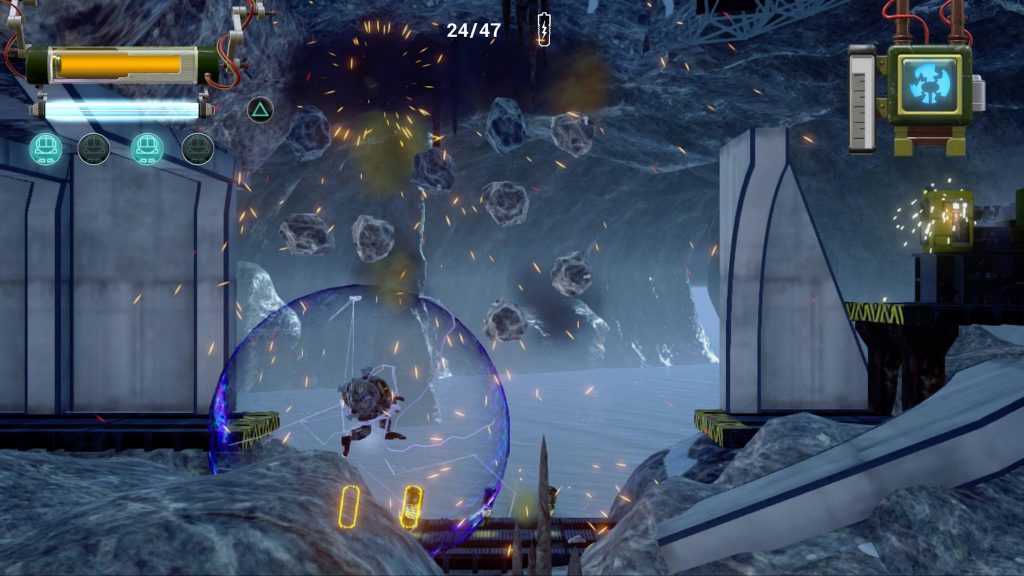 In fact, the only thing that translates from the story to the gameplay is Kramer. The problem with Kramer is that he is constantly leaking energy. Every move you make saps this from his overall life bar, with obstacles and risks becoming more threatening because of this. Thankfully there are energy increasing batteries to find along your path to survival which keep you topped up and act as a collectable McGuffin to help tally up to that 100% completion rate. Each level is littered with recharge stations also that act as checkpoints to keep you going and to help handle tough segments, but these are limited to a maximum of ten uses which need to be utilised with forward consideration. 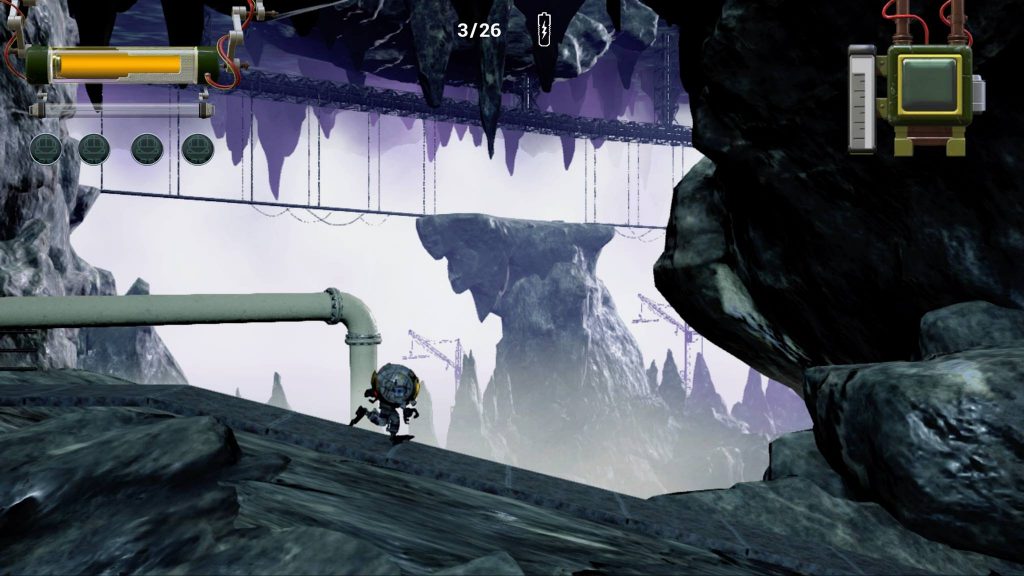 The energy balancing mindset that results from this mechanic is a bit of a double-edged sword. While it is somewhat inventive, it is also downright infuriating at times. To reiterate, if you were to simply jump on the spot for a few seconds Kramer will simply keel over and must restart from a checkpoint. As you can imagine, this can lead to frustrating moments when jumping between platforms, dodging rocks only to die for the sake of it. This also leads to obstacles being more dangerous as a result, falling rocks can sap your energy instantaneously if approached without extra caution and environmental hazards such as fire can be an utter death wish. Oftentimes it can feel that the energy mechanic exists only to arbitrarily increase difficulty levels in what is otherwise a peaceful game without enemies because of this. 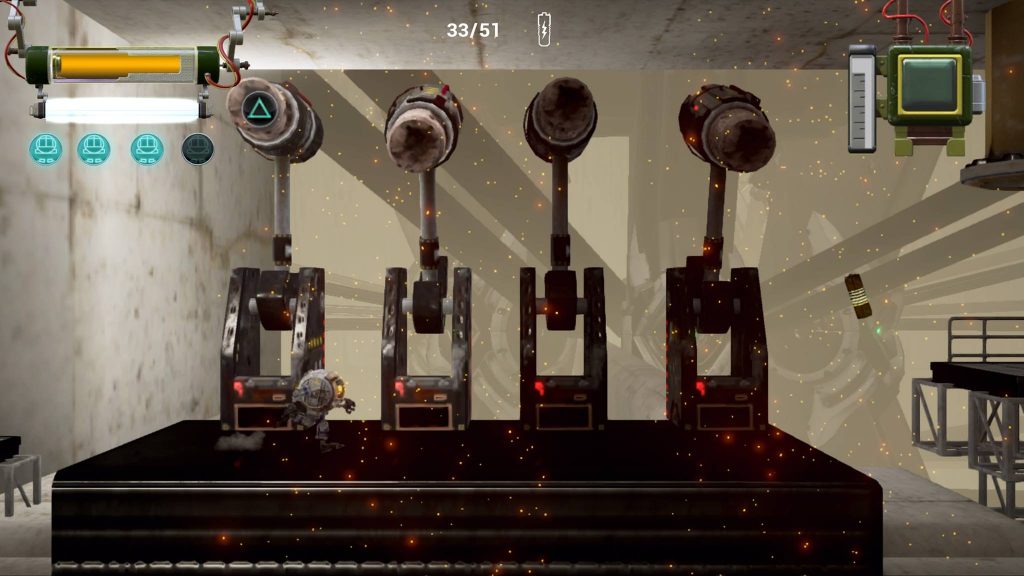 This sense of random difficulty is not helped by what feels like unfinished and inconsiderate programming errors or collision detection. Nothing demonstrates this better than the crushing hazards that you find littered around factory style levels. In other platformers, you will only ever get affected negatively by these if you were trapped underneath the hazard as it hits your character. In Shiny you can get killed by these simply by jumping into the underside of the obstacle. In some cases, if you were to run into one as the hazard lifts and catch it at an angle with your circular character it can lead to a death. The eighth level was filled with these obstacles and it took far more tries than I can be proud of to overcome due to this. It just isn’t fun.

There is not much to say beyond this point. With only twenty-one levels of basic gameplay to navigate, some being incredibly short and empty, the game is over before it can really provide anything of interest. The graphics and soundtrack are equally bland and devoid of any substance, leaving Shiny a dull and lifeless adventure that simply cannot justify its own asking price. Best avoided.

Shiny
3 Overall
Pros
+ Somewhat interesting energy mechanic
+ Mercifully short
Cons
- Basic, bland gameplay
- Poor collision detection
- A myriad of presentation issues that ruins any sort of charm the game has.
Summary
With bland visuals, soundtrack and gameplay, Shiny doesn’t have a lot going for it. There is a brief flash of intrigue thanks to your energy being governed by your actions, but even with this considered the game is beyond recommendation.