Sherlock Holmes has a long legacy of video games, some of which are fondly thought of. It’s a very suitable license for a video game, with a strong, already established character who is highly skilled at what he does. Putting him into the correct genre, like a point and click or adventure game, makes perfect sense and you can see why there have been so many games. Sherlock Holmes Chapter One obviously focuses on his ability to observe and deduce but, not so obviously, it comes in the form of an open world game. 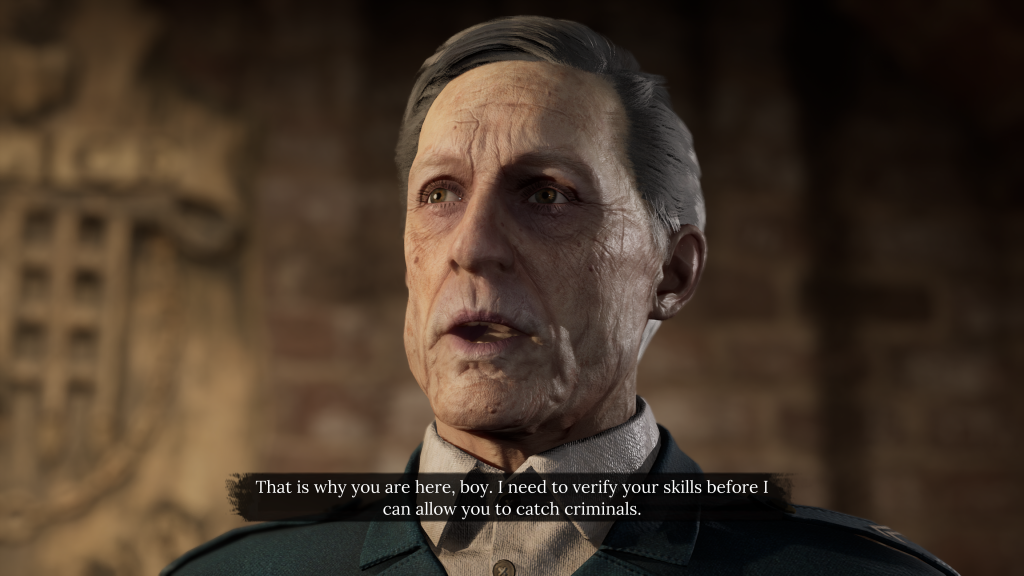 The title may suggest the first part of many but actually it’s a stand alone game based around Sherlock Holmes’ early years as a young man yet to make a name for himself. He travels to Cordona where he spent his childhood to visit his mother’s grave, who died when he was young. He then returns to his family home and memories that he had long forgotten start to return to him. On top of this as soon as he arrives murders start to happen all around him and after displaying his prowess the police are happy for his help as a consulting detective.

There is no Dr Watson here, but Holmes is accompanied at all times by his friend Jon so he always has someone to talk to and bounce ideas off. He also acts as a morale compass, giving hints on what he believes to be right and giving feedback, both positive and negative whether you want it or not. 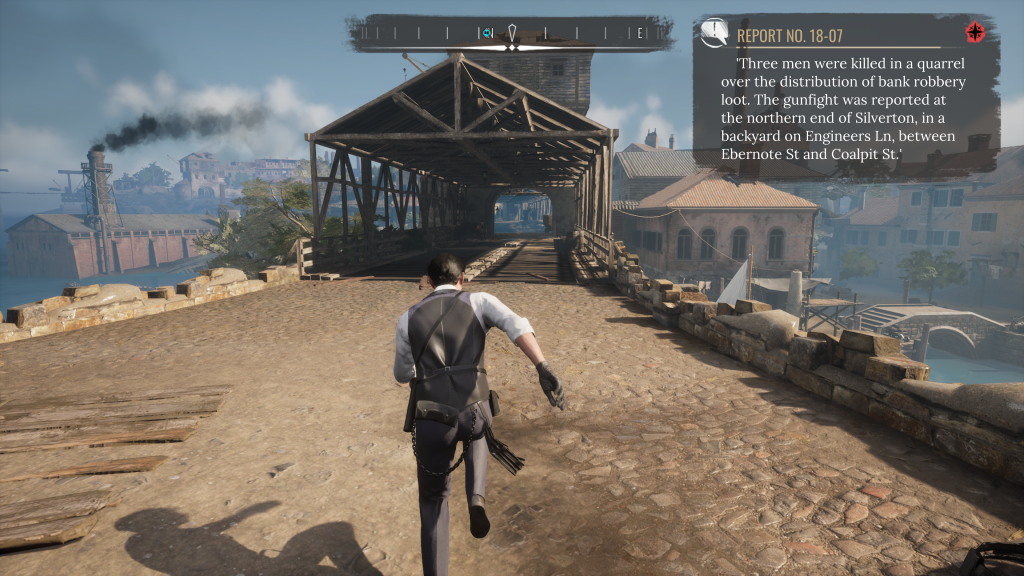 When I mentioned the game being open world I don’t mean in the Grand Theft Auto sense but more like a Yakuza game. You don’t drive vehicles but run around the city on foot, though you can fast travel to specific points once you have discovered them. Being in an open world gives you the chance to explore and find cases naturally, whether through spotting a poster or overhearing a conversation. It also means there is an extra layer of detective work in that you need to find out the location of suspects and look them up on the map before you can go there.

Despite the larger scale of the world the game’s focus is still on detective work. Find clues, get statements, figure out who did it and accuse the culprit. There are a few different mechanics in order to do this. The most basic is just inspecting things in the environment. You can walk around and items will be highlighted that you can look at and you can press

to send out a pulse that will highlight everything in the vicinity if you’re having trouble. Sometimes there will be a group of items and the view will zoom in and you’ll have to find which are the important ones. As your cursor passes over the correct item it turns yellow so discovering everything isn’t an issue but you will need to be observant if you’re inspecting a body, for example. 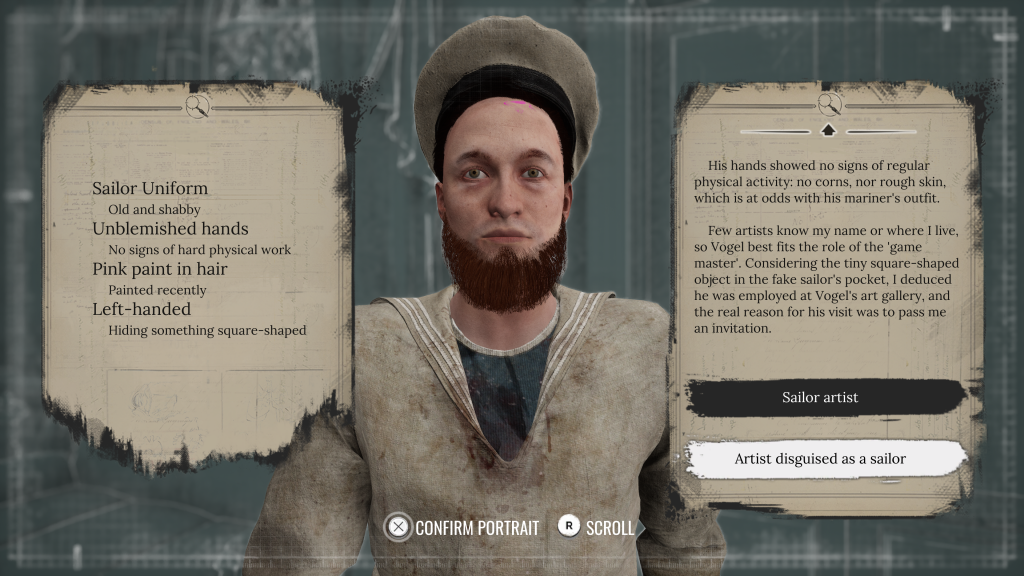 Sherlock is also able to concentrate with the tap of the

button. This will allow him to focus down to picture the scene, whether that’s figuring out the direction someone ran off in or deducing how items came to land where they are. A combination of these techniques will be used throughout the game as Holmes doesn’t gain any new abilities during his adventure.

Another important aspect is talking to people, suspects or otherwise. The NPCs that fill the world can be spoken to but in a very limited way. By default Sherlock appears well off so high class citizens will talk to him happily whilst the lower classes will refuse to help but Holmes has a talent for disguises so can dress as anyone and this comes into play quite often for gaining information or infiltrating areas. 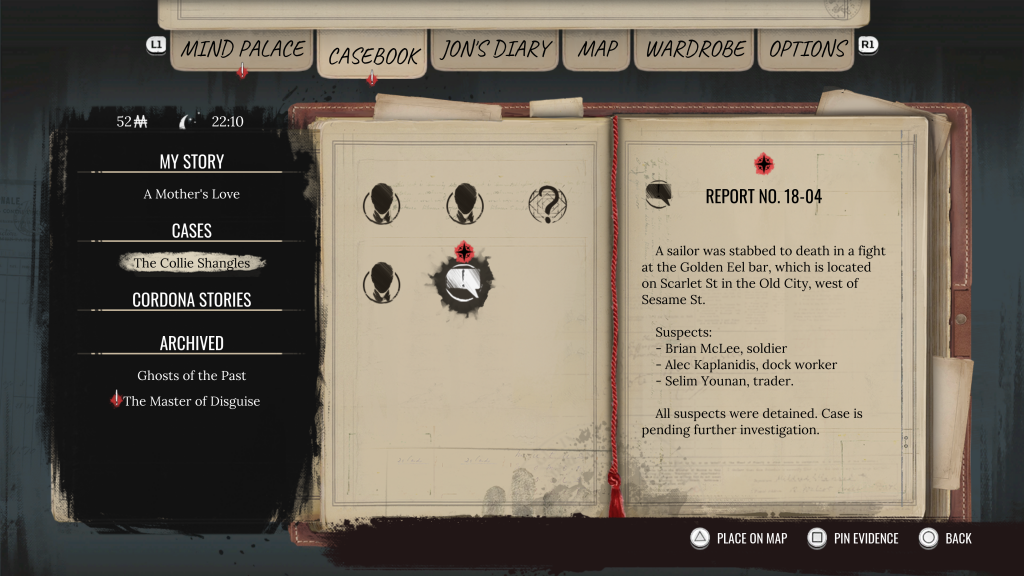 As you investigate you’ll note evidence in your casebook which will highlight different elements of the investigation. You can pin an important piece so if you speak to an NPC you’ll basically be asking a question about that piece of evidence, but played out using generic dialogue. The evidence will have a little marker on to let you know which method of investigation is needed (which can be disabled if you want more of a challenge), but it takes some getting used to as you must have the right evidence highlighted at times otherwise interactions won’t appear. You’ll learn it early but it is a little clumsy.

There are key characters you can speak to as well and they will give you a wheel of dialogue. More often than not you’ll want to exhaust them all, rather than picking and choosing but there are times when choices must be made. Beyond that you can, at times, show people evidence which lets you select an item from your casebook where only relevant stuff will yield results. 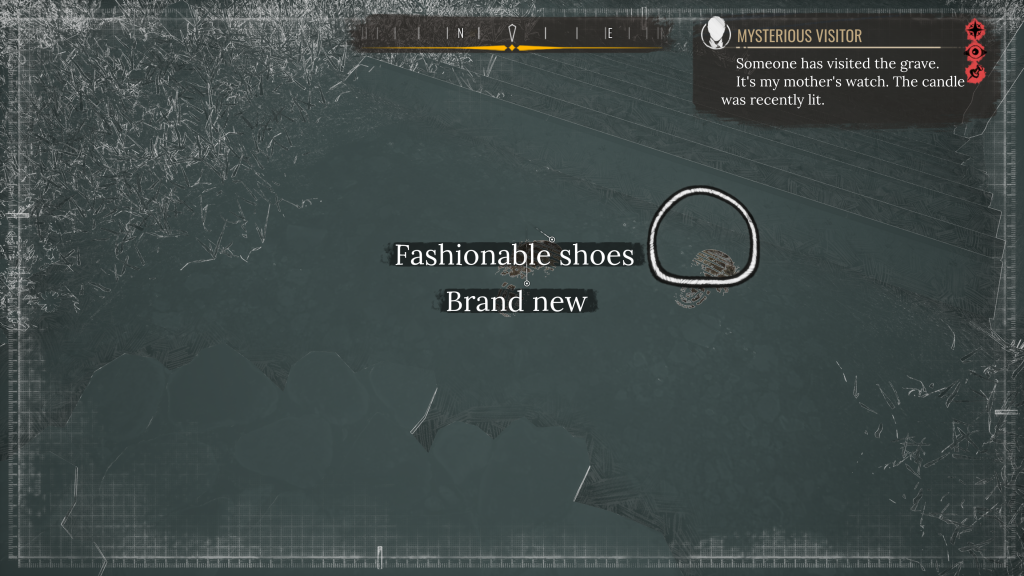 In larger cases bigger observations will go into Holmes’ Mind Palace which will let you cross reference certain discoveries to create a chart showing what happened to figure out who the culprit was. Here you’ll be given a couple of choices to make as to what you think happened which will then allow you to accuse one of the suspects. These can sometimes be quite a challenge to figure out with lots of evidence applicable to all suspects, but there is usually the odd piece that will point you in the right direction if you’ve discovered everything and are paying enough attention.

The game doesn’t seem too worried who you choose however. The game progresses whoever you pin the murder on and apart from popping a trophy or Jon chastising you you’ll not know how you did. I can see both the pros and cons to this, letting you live with your mistakes whether you know you’ve made them or not is maybe realistic but not knowing, in a video game sense, plays on my completionist nature. There are no repercussions story-wise either like if you accuse the wrong person then the actual killer is free to kill again or anything, it’s a little weird to be so consequence free. 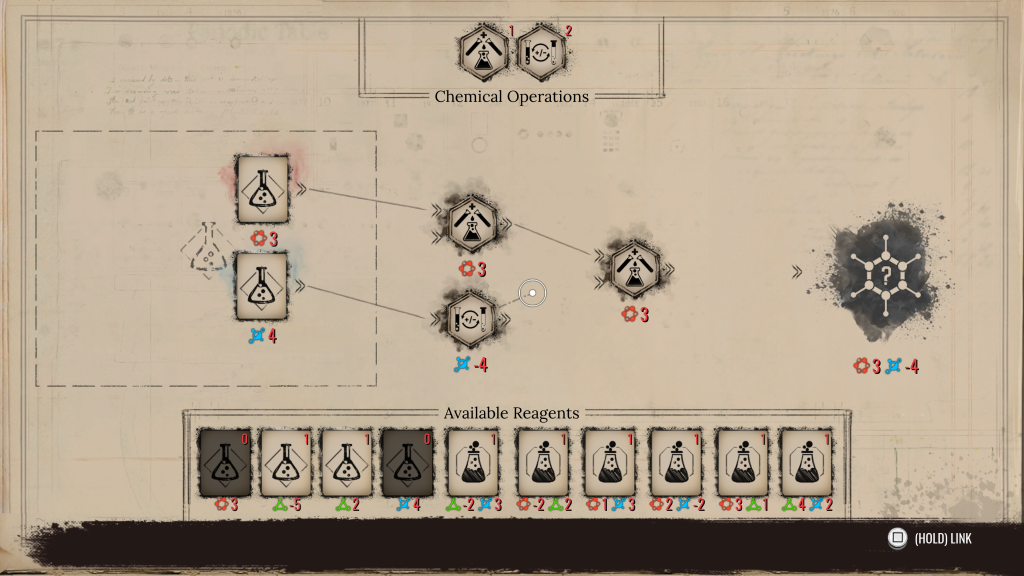 There are a couple of other game mechanics that pop up every now and then. One is a chemical analysis game that has you combining numbers representing different elements to create a final compound. It’s pretty basic maths but as more possibilities are introduced (you start off with simply combining them but can later change a positive number to a negative or double them) you can end up staring at them for longer. These can be skipped if they’re not your cup of tea.

The other is an element that only pops up a couple of times in the story but does have optional areas for you to tackle. This is a combat arena. You’ll enter a room and have to use your gun to take out foes. You can just shoot them in the head but the game really wants you to take people alive which means disabling them in some way, running up to them and pressing the correct button to arrest them. You can use the environment to cause an explosion to stun them or shooting something on their person, like their hat or ammunition belt. If the enemy is armoured you must shoot the armour off a piece at a time (arms, legs, head) before they can be stunned with time slowing as you aim for a limited time. 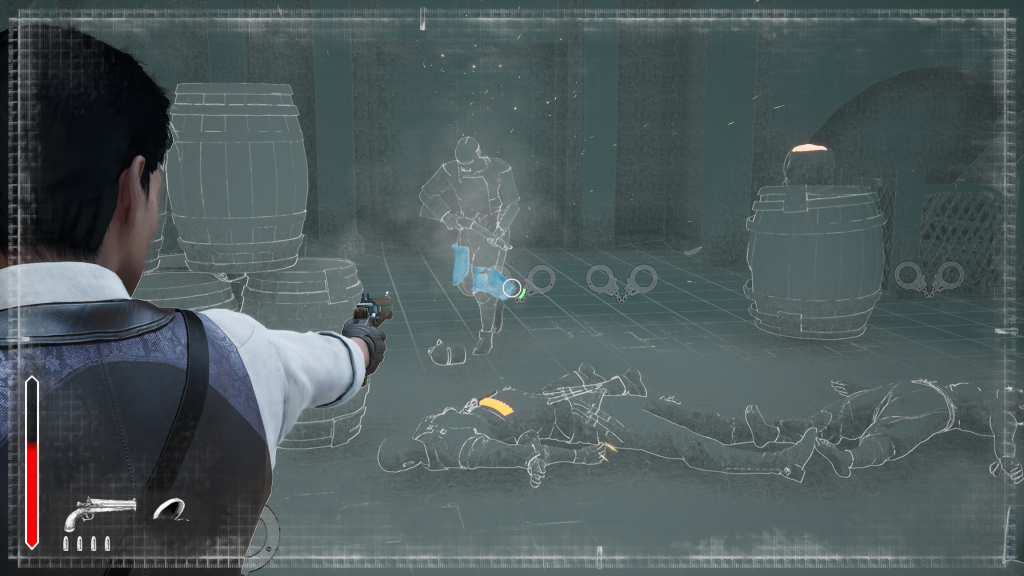 It’s enjoyable enough but there’s no cover mechanic or anything too complex. It becomes more of an arcade game with you getting more points the more efficiently you deal with everyone, losing points for kills. It’s an oddly infrequent event though it’s not really good enough for it to appear constantly. It’s a good way of making some extra money though with which to buy new disguises or furnishings for your home.

The main thread of the story focuses on Sherlock remembering his past through his childhood home. Some cases are linked to this progression, but in a game barrier way rather than a story based way. All other cases are side ones which can be ignored if you so choose, but fans of open world games who like to experience everything will have a lot more content to get through.

Once I’d got the hang of the intricacies of selecting evidence before trying to achieve things I really started to enjoy Sherlock Holmes Chapter One. The open world looks suitably busy and some of the graphics are actually very nice. The lower budget does show itself in certain areas like animation blending, a spotty frame rate as you run around town and general visual glitches but it holds together very well otherwise and the faces, although not super realistic, are impressive. The load times are excellent on the PS5 as you’d hope as well. 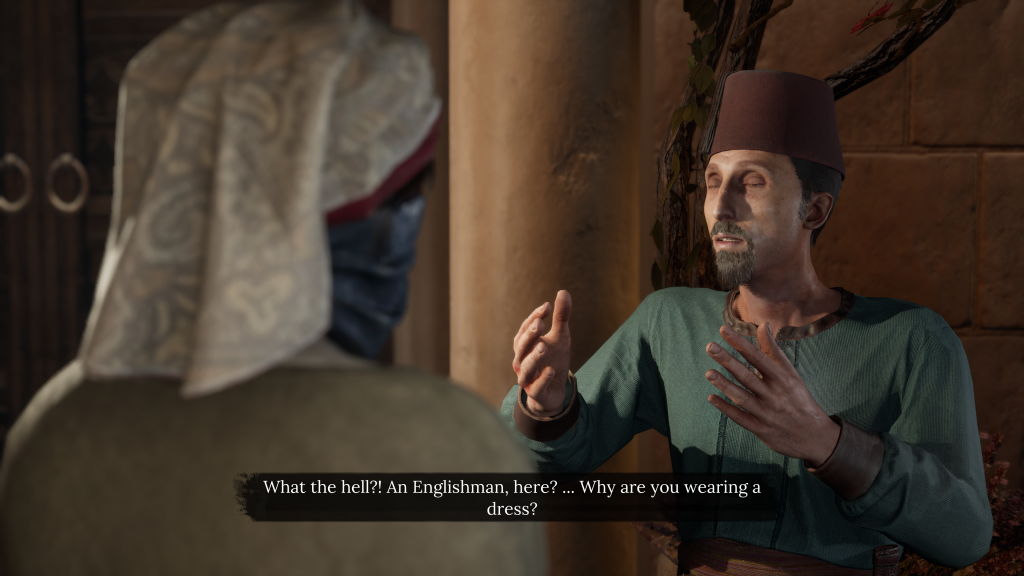 The gameplay doesn’t have much variety from start to finish and there is a lot of game here if you want to do everything so that may put some off along with the lack of action opportunities but it will probably hold the attention of sleuthing fans to completion as it did for me. Sherlock Holmes Chapter One is an engrossing game, to the point where I may just have to go back and experience some of the older titles.

Sherlock Holmes Chapter One
8 Overall
Pros
+ Nicely balanced investigations
+ Surprisingly technically advanced for its budget
+ A lot of content
Cons
- Consequence free accusations
- Some technical hiccups
- Pinning evidence is clumsy
Summary
Sherlock Holmes Chapter One puts the detective into an open world setting whilst giving him plenty of murders and side cases to investigate. There is the odd bit of action here and there but those who like to explore, examine and deduce will get the most out of this adventure.