Gynoug continues Ratalaika Games recent trend of porting obscure old shoot ’em ups to modern systems.  As with their previous port, Gleylancer, this game is a horizontally-scrolling shoot ’em up that was first released in 1991 on the Sega Megadrive (American readers will know it better as Wings of Wor).  The game was well-regarded back in 1991 but the question is how does it fare thirty years later?

Before we get into that, what is Gynoug?  Unlike the majority of shoot ’em ups, this game isn’t set in either a war setting or a futuristic space battle.  Instead, you play as Wor, an angel who has to defend the heavens against the demons of Iccus who are led by ‘the Destroyer.’  So, yeah, this one has a religious setting.  Now that might not really matter to the gameplay but it did Masaya Games (the original developer) a bit of scope for creativity rather than having us face off against endless planes/spaceships before facing off against a giant tank or whatever. 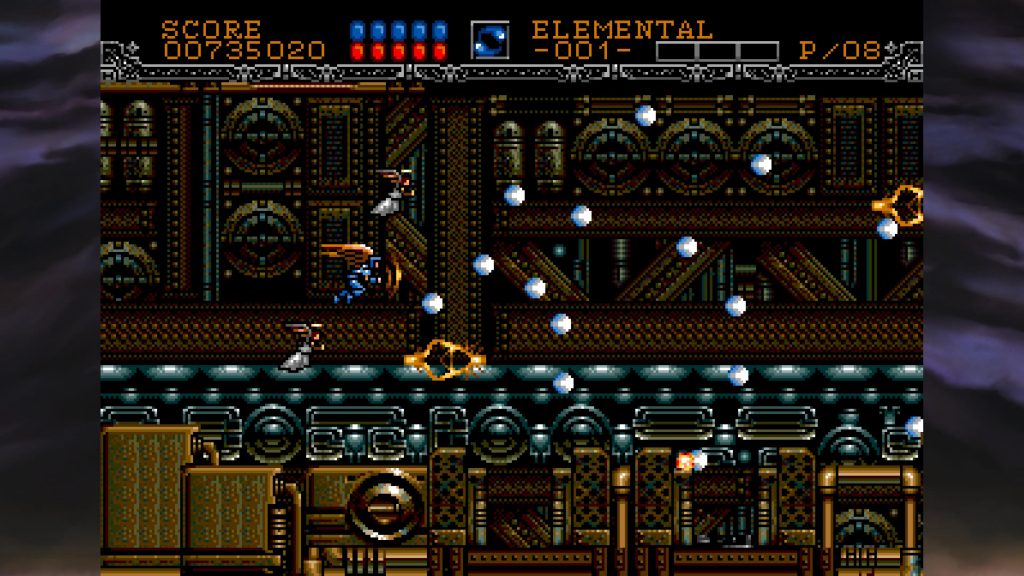 But, this is a shoot ’em up, so yes you will be flying from left to right, taking out smaller enemies before facing off against sub-bosses and end of level bosses.  The control system is pretty straightforward, the usual d-pad/left stick for movement and

to shoot.  But every shoot ’em up needs a twist and this one’s is that you get to use magic attacks.  As you fly along you’ll see scrolls with letters and these give you different attacks.  You can stack three of these and then select one with

and then use the attack with the

The power ups have various effects.  You’ve got energy balls that absorb bullets, ‘wildfire’ that offers increased damage, lightning bolts that shoot from the sky, homing arrows, ground attacks, smart bombs and more and it’s quite enjoyable testing these out and seeing some of the creativity on show.  On top of that you’ve also got an R-Type style red/blue/yellow system for your primary attack where red is a spread fire, blue is a forward focused attack and yellow splits your firepower in front and behind. 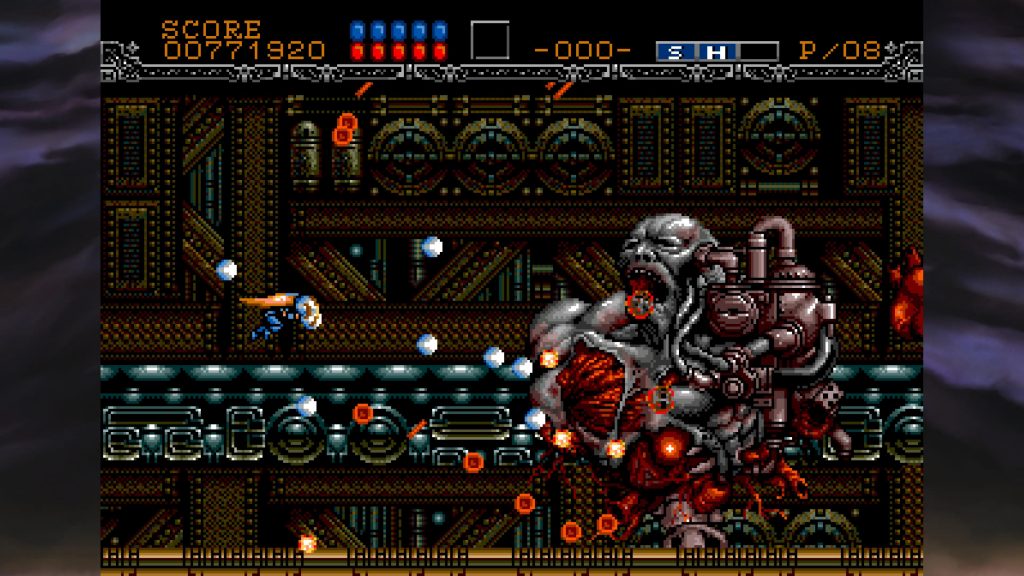 The game plays out across five main levels and then there is a boss rush level at the end of the game too before you get to see the final credits.  Each level plays similarly but has a unique look and setting and the game does well to offset the number of enemies you face by giving you a fearsome level of firepower.  It plays very smoothly and while it is unmistakably a 16-bit game, it does feel like a bit of a hidden Mega Drive gem.  We mess about with emulation all the time and this is exactly the sort of thing we like finding.  Namely, a game that we never heard of back in the day but plays nicely today.

There are three levels of difficulty – easy, normal and hard – but you’ll want to keep things light because Gynoug can be absolutely savage.  Bullets can come at you from anywhere and they come fast and while the game is very light on environmental hazards, the boss battles can be particularly tough.   The later bosses push out a lot of firepower and are tough to damage and we’d go as far to say that most normal gamers wouldn’t have a chance of beating the game.  Sure, people would have beaten it back in 1991 but that would have been people who didn’t have vast digital libraries of games.  These days committing hundreds of hours to a shoot ’em up in order to master it is a tough sell. 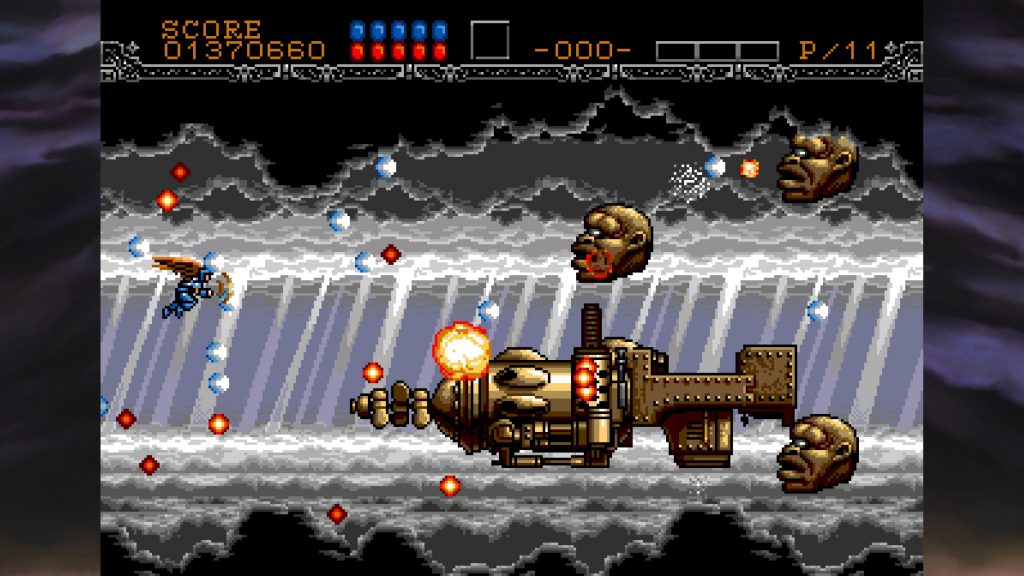 Thankfully, if you’re just in it for the content then Gynoug adds a rewind feature.  If you get hit (or just miss a power-up), you can just hold

to rewind the game as far as you want.  This allows you to get through the entire game, entirely nullifying its level of difficulty.  This isn’t great if you want a challenge though and unlike other Ratalaika ports, this game doesn’t give you a normal version (without the rewinding) so the ability to undo mistakes is constantly there under your left index finger.

The only big criticism is saved for the game’s final boss who only takes damage for what feel like a second every now and then.  This makes beating it an absolute chore (even with the rewind feature which by then we were entirely abusing).  We can only imagine how frustrating it was for gamers back in 1991 when they faced it and were wondering why it was invulnerable for 95% of the time. 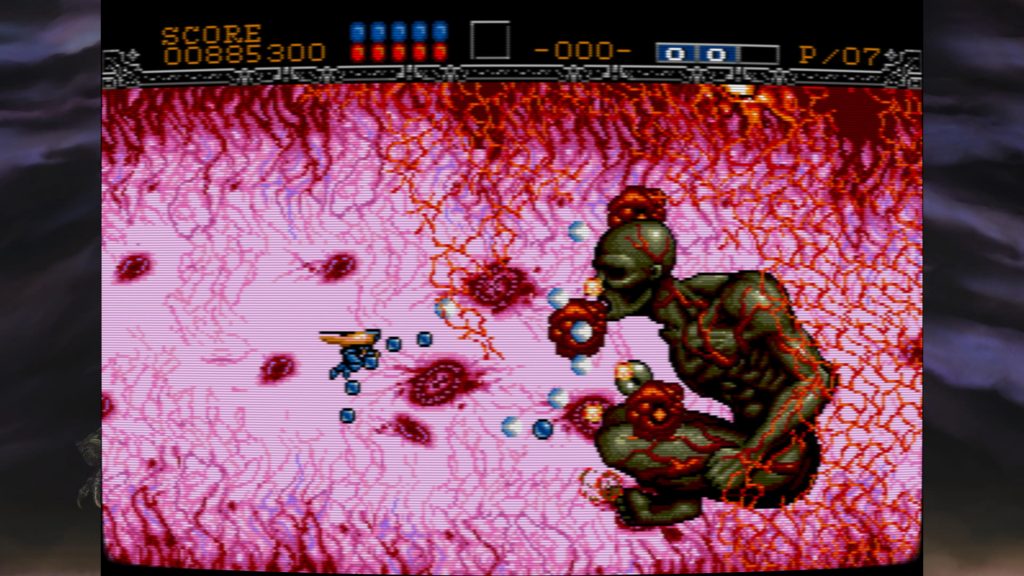 On the plus side, that rewind feature does mean you’ll get to see all of the game.  And what a strange, interesting game it is.  As we said, you don’t see this type of setting in shoot ’em ups very often and it’s great to see.  Each level has its own unique look as you fight your way towards heaven and the creatures you’ll face (excellently created by Satoshi Nakai) as brilliantly designed, very detailed and quite grotesque.  Add to that a stirring soundtrack and you’ve got a very nicely presented game.  You also get to add, and customise, a CRT filter to give the game an authentically retro look.  Unfortunately, the wallpaper choices the game gives you are rubbish as they don’t properly frame the action at all.

We support this type of port.  It’s barely a remaster but it’s a smartly emulated version of a very obscure, but decent, old shoot ’em up.  It’s exactly the sort of thing we would have enjoyed playing back in the day and so we’re happy to see Ratalaika continuing to unearth these hidden gems.  It might be all too retro for younger gamers but as a nice retro curio, Gynoug is well worth checking out.

Gynoug
7 Overall
Pros
+ A great choice of game to port
+ Smooth gameplay
+ Good choice of attacks
+ Decent graphics and enemy designs
Cons
- Rewind feature takes away any challenge
- Final boss is terrible
Summary
Porting an obscure 1991 console shoot 'em up may seem like an odd choice but we were more than happy to play through Gynoug for the first time, if only to see its unique take on the horizontally-scrolling shoot 'em up genre. It may be more of a museum piece than a relevant game but Gynoug is well worth a look for shoot 'em up fans and retro gamers alike.