Backbone from Vancouver-based developer Egg Nut and publisher Raw Fury is, to use their own words, a  a pixel art cinematic adventure with stealth and action elements. That’s labouring the point a little bit perhaps as it’s more a walking and talking gumshoe-em-up. Think film noir scenes based on a Vancouver inhabited by various animals with you playing as a weary private eye called Howard Lotor. Oh, and you’re a raccoon into the bargain. 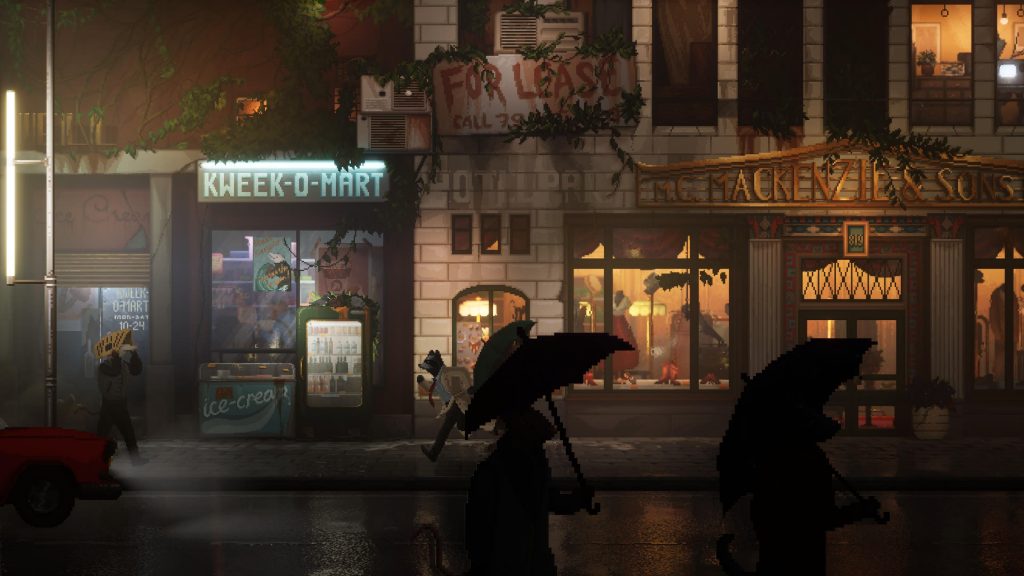 We hoped there was a comedy anagram snuck into his name there, but all we could find was Warlord Hoot, though we’re getting visions of warmongering owls now. Hmm. You can have that one for your next game if you like Egg Nut. Those of you who also play on PC might already be familiar with the prologue that came out in 2019, even if not, the reviews were generally positive, that twit is worth watching for the amusement value at the very least. Egg Nut might be based in Canada, but the eighteen staff are spread across six countries including the UK & Russia. You’d be forgiven for thinking that the dev was based in the latter when the credits roll.

In the alternate Vancouver, everyone’s an animal. Literally in this case. As we mentioned, the protagonist is a raccoon and your closest confidante is a beaver that drives you around the place between the scenes of the story. Only Howard doesn’t really take the opportunity to tell him what he’s discovered, instead meeting a fox that turns out to be his business partner of sorts. Only her motivations are never that clear. 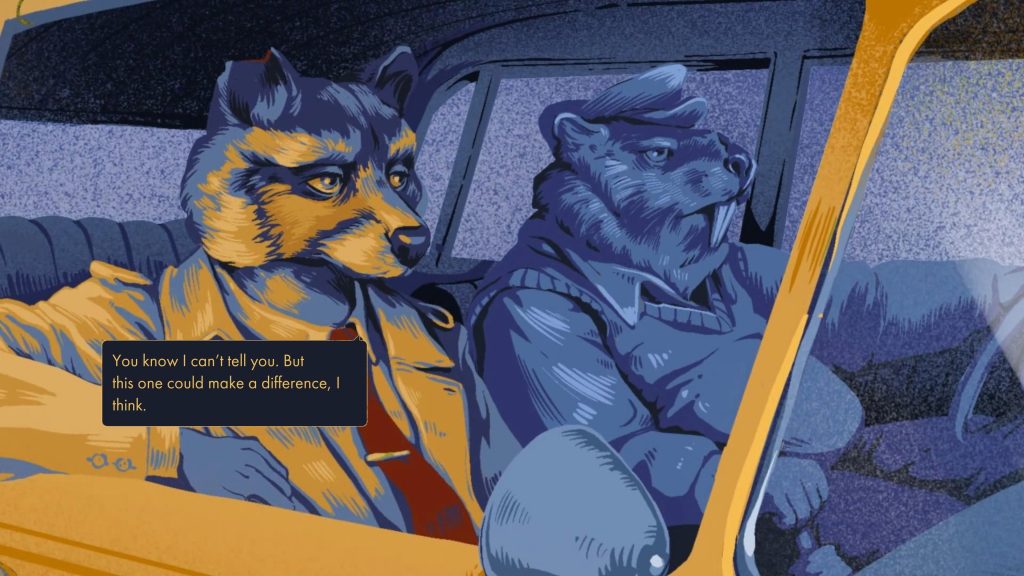 In the hierarchical society that rules the city apes are on top with the various other animals kowtowing to them in their own way. Being a raccoon, you’re somewhere near the bottom, though not quite so low down the pecking order as rodents. This setup is dripping with so much allegory you could almost bottle it. Aa missing husband towards the bottom of the foodchain, figuratively as well as literally, accused of cheating by his mistrusting wife is the case that leads to your being caught up in something bigger.

As you can no doubt see from the screenshots, Backbone is gorgeously rendered in a pixel art style with the architecture and denizens of the various neighbourhoods rendered in glorious detail. While we don’t expect you to necessarily recognise the real-life Vancouver locations that have been lovingly recreated, you’ll certainly be able to appreciate the level of detail here. It’s exquisite. 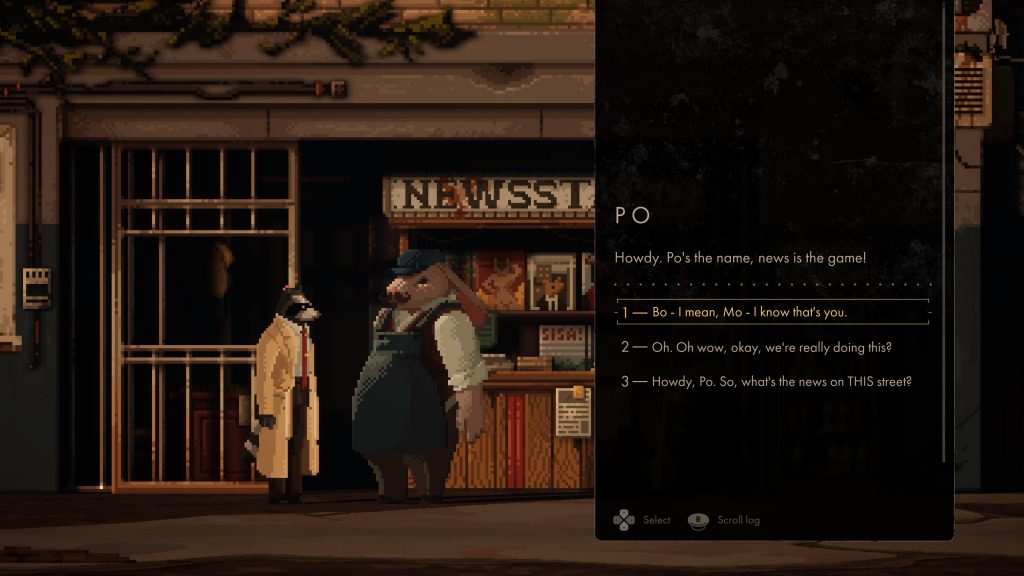 Additionally, the dialogue, strictly in the written form here, is very well done with Lotor’s world-weariness conveyed very well. At least there’s not a cliched Sam Spade-style drawl  narrating matters. This gives the scriptwriters much more opportunity to provide alternate dialogue trees for you to explore with a lot more nuance than you might otherwise get from a narrative based adventure like this.

However, it’s not all good. After act three of five, the story breaks into an outright gallop after the relaxed canter of the first two acts. Along with the major plot device and conclusion to the storyline as it comes to its inevitable climax, any feeling of player agency and influencing the outcome rather goes out the window for the player. Not to mention the twist, such as it is, being such a volte face that you’re wondering whether you’re playing the same game in the final act. The fact that several significant plotlines come to nothing just added to the bewilderment we felt when the credits rolled. 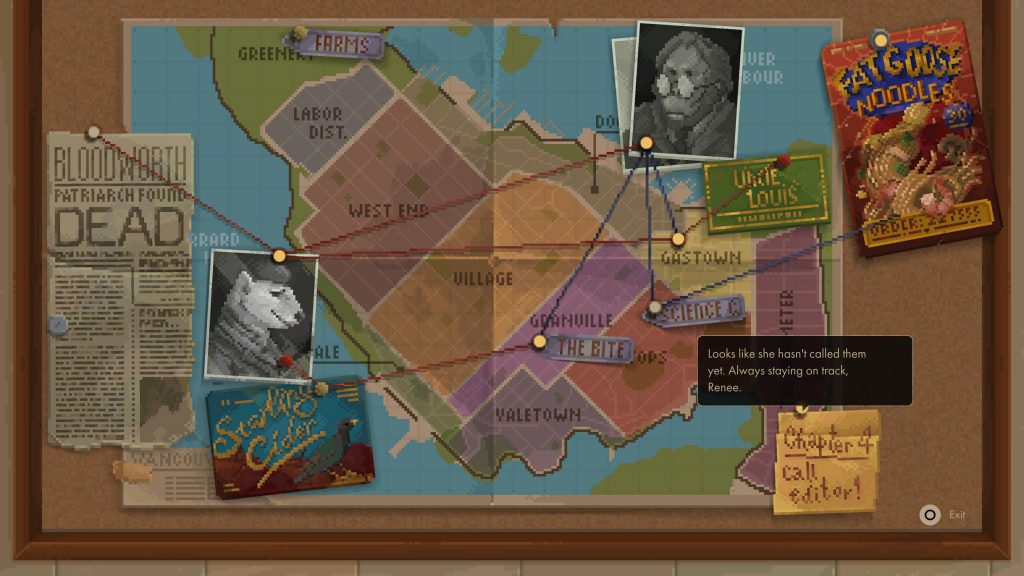 The music is quite wonderful and bubbles away in the background nicely, but the pixel art overshadows it. It’s rare for one facet of a game to be entirely overwhelmed by another, but Backbone is entirely a victim of its own success in both regards.

We’re intrigued by two aspects mentioned in the initial Kickstarter description that sadly didn’t make the final cut for whatever reason. One was a detective case maker, the other was smell-based stealth mechanics. A detective case maker would’ve probably been great fun in conceptual form, but we can imagine it would’ve been a nightmare to implement without templates of some description.  As for stealth mechanics, they’re in the game, but rather more conventional in terms of simply not being seen being your goal. No smell-o-vision here.  We’re not marking down Backbone for these omissions, just commenting on them. 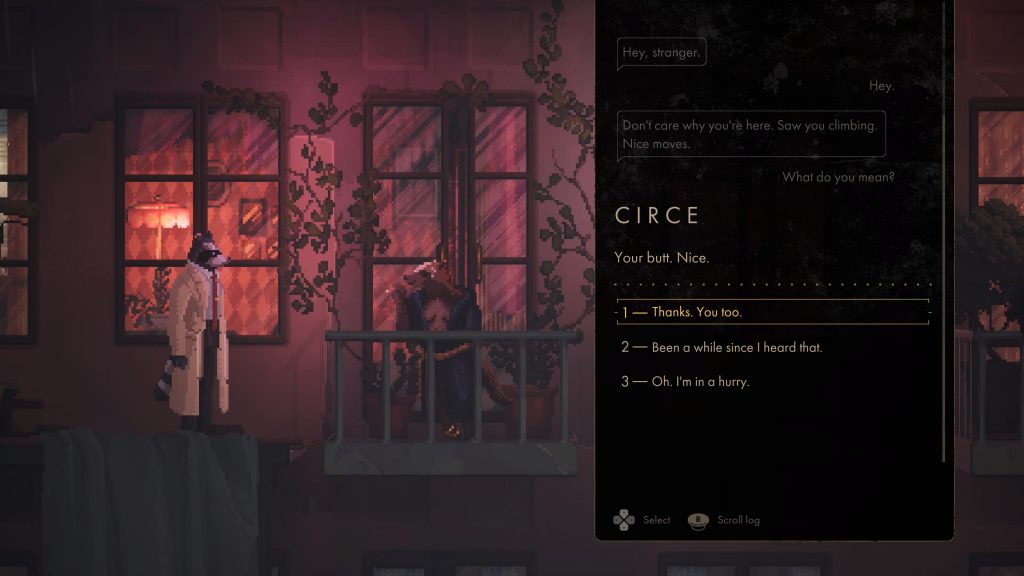 Despite the negatives, there’s a great game here in Backbone. The major downsides being the £18 pricetag and the fact that there’s ultimately one outcome regardless of your input. As a debut, this is great stuff from Egg Nut, we just hope the lessons learned from developing this and the feedback received makes their next title be something quite spectacular.

Cons
- The story overwhelms any sense of player agency by its sheer need to wrap things up
- Plot hurries to a speedy conclusion after third act of five
- Certain plot threads remain unanswered by the end of the game
- Rather more expensive than we'd necessarily expect
Summary
Backbone is a fine debut from Egg Nut but hamstrung by a high price and a story that outright gallops to a conclusion, overwhelming any feeling of player agency you've built up by the third act of five. The price makes it difficult to outright recommend, but very much a firm foundation for Egg Nut to build on.