I didn’t get on with Rugby 18. Part of it was my own ineptitude but I couldn’t escape the slow, weathered grind and found tries hard to come by. The content, whilst officially licensed, felt slight and ran out of steam quickly. EKO Software have returned to the series after a hiatus in excess of two years. After failing to get a game for last year’s World Cup off the ground, has the extra time given Rugby 20 some extra polish and more substance? 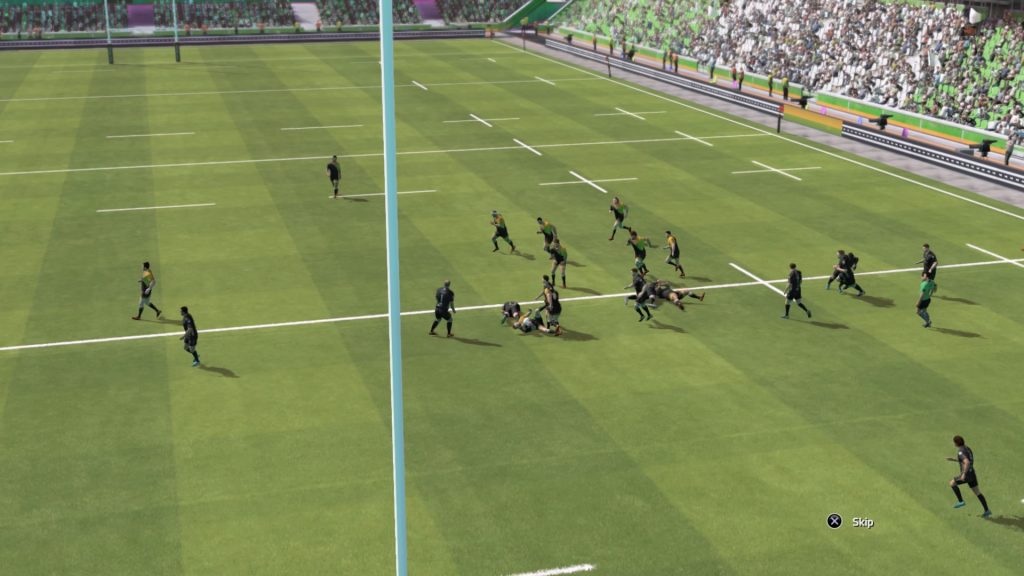 Rugby 20‘s representation of the sport is well done. You have all the basic fundamentals in play which come together to create an attritional battle on the pitch. It controls well enough with the tutorials helping introduce newcomers to the basics. They still don’t offer much depth in terms of context for why running, passing or kicking the ball can be useful, but they do at least train you for the controls.

It’s at this point I have to concede I initially felt irritated by the stop-start nature of the game. It wasn’t too long before it began to click. During my time with Rugby 18, I must’ve played some exceptionally thick egg chasing because I started to enjoy carving out tries this year. You do have to earn it but the amateur difficulty does open the gaps for you to exploit. Passing is mostly responsive with quick offloads only provide some struggles if the midfield is packed. Dishing longer throws feels reliable. Tackles have some impact with dangerous hits looking particularly brutal. It loses a little crunch when the default camera is so far from the action. 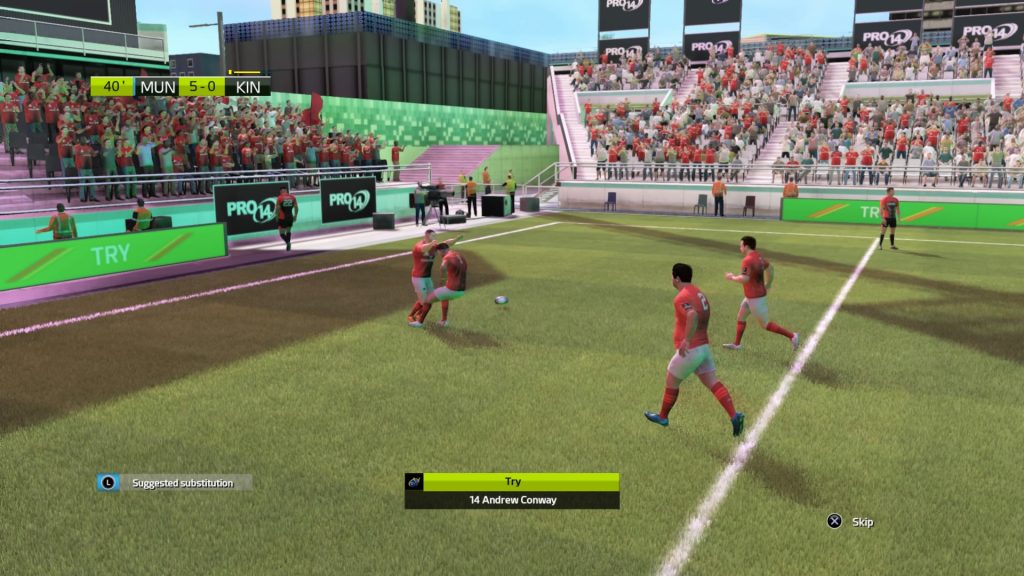 Providing you have the space for kicks, they can help gain some extra ground and the setplays like scrums and penalty kicks work nicely as intended. You can trigger some plays on the fly which is a nice new addition. Anything that gives you more options is welcome, even if I didn’t really need it. If there’s anything about the match engine that shows a lack of polish, it’s some of the opposition animations. Sometimes they’ll magnetise to your players when delivering a tackle and it looks a little clumsy.

Presentation remains largely unmoved from 2018’s effort. The same commentary lines are in place and they remain repetitive. It’s the order of the day with match scenes only coming in one variety. It all seems very basic with little or no frills and the atmosphere flattens due to it. At least there’s variation to the match venues and, aside from the noticeable stutter at kick-off, the game runs smoothly. Loading isn’t especially long either so you can bounce from match to match. You can even pause and resume matches where you left off. 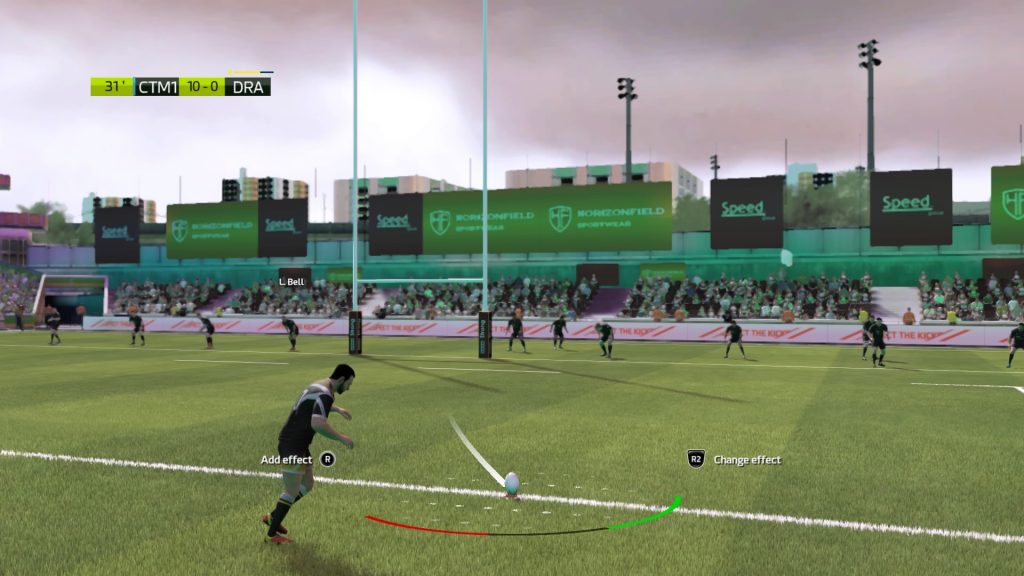 Options remain fairly bare with three difficulty modes and two basic camera angles. You can tweak their zoom and angle but, for the most part, it’s away from the action. On the one hand, it allows you to see more of the pitch and can plan accordingly. It’s also not a game that benefits from being viewed at close quarters. It looks identical to the last effort which, in screenshots looked okay but, in motion, starts to look every bit the budget title.

In terms of raw content, you’re left with an identical offering to last time. The same four leagues are represented from England, Wales, France and Pro14’s more cosmopolitan representation. The lack of additions keep the game feeling small and you have to wonder where the progress has been made. Even in the other modes, there’s nothing new to marvel at. MySquad remains if you wish to create your own side from card trading. Like last time, there’s no real money transactions involved, meaning you build up your coins through answering quiz questions and playing matches. 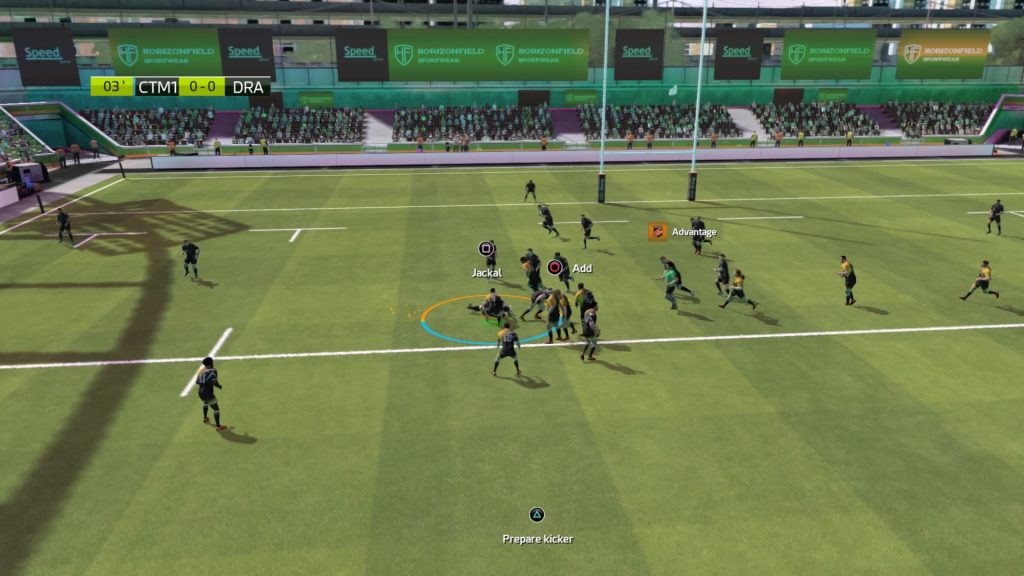 Despite the teams being updated for 2020, it’s disappointing to see no new competitions or modes to dig deep into. It seems the time spent between games has been used to tweak the gameplay, update the teams and very little else. It feels stagnant to me with the same rigid modes on display. Online options are restricted to public or private matches with no opportunities for online leagues. MySquad is a strictly single-player exercise. It’s fun to build your squad but, with no means to show it off, it can feel shallow.

It makes you wonder what the two years off were for. What’s placed on display here is a game that, whilst it does play decently, does very little to differentiate it from the lacklustre predecessor. I’m having a better time with it but it’s not going to endure when it sticks so, so close to the same content. I know it’s a small team and they had to abandon last year’s work but, it still doesn’t feel good to see such minor improvements.

Rugby 20
6 Overall
Pros
+ The rugby engine is decent, if a little rigid.
+ The handful of leagues on offer are well-licensed.
+ Scoring feels satisfying and well-worked.
+ MySquad is a compelling mode that might give the game some longevity.
Cons
- Very light on options.
- No new leagues to check out.
- No new modes and barebones online play.
- Very little progress to differentiate this from 2018's game.
Summary
Rugby 20 is a playable effort completely let down by the fact, in over two years of development, very little has changed. Game modes remain slim, rigid and it hamstrings a player who wants to devote more time to it. It's more enjoyable to play and carving together tries has a satisfaction to it, but so much of Rugby 20 feels like a shallow retread.