A party game with a good hook can go a long way. We’ve seen plenty emerge that have hit the right note and the latest to step into the fray is Rubber Bandits. Coming from Flashbulb Games, this brawler centred around thievery is a quick, simple effort that seems to keep things nicely frantic. Whilst the concept is simple, plenty of effort has went into making this feel as polished as possible. 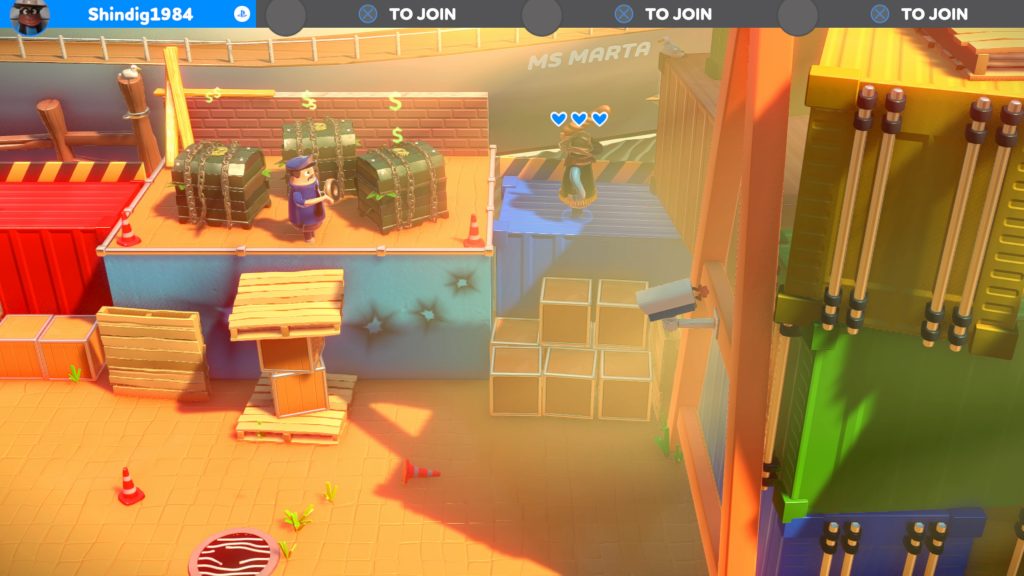 The premise of Rubber Bandits is fairly simple. Each map represents a location to rob and up to four players attempt to escape the place with as much loot as possible. These heists are quick and chaotic but easy enough to grasp. Your chosen criminal comes in a variety of cosmetic disguises but they all play the same. You can grab and throw objects to disrupt police or other players and have a basic attack which can either be enhanced with weaponry or you can just go in all fists blazing. Rounding things out is your jump which feels a little floaty but fits with characters that largely feel physics-based.

There’s nothing complex about movement and platforming is fairly forgiving. There’s dozens of maps to case and defraud and they all have a bright, colourful look to them. There’s a plastic sheen to the environments and players that really lights up and the cartoon aesthetic plays into the comical violence. Music works well too. It’s jaunty and light-hearted with the right tempo to play to the frenetic action.

The locations tend to be small with maybe a couple of moving parts to open up a bank vault or operate a moving platform. Each level is briefly introduced by showing the location of any loot, an entry point and an exit. This way each player knows where their objectives are and it leads to some wonderful conflict as they all converge for a piece of the pie. 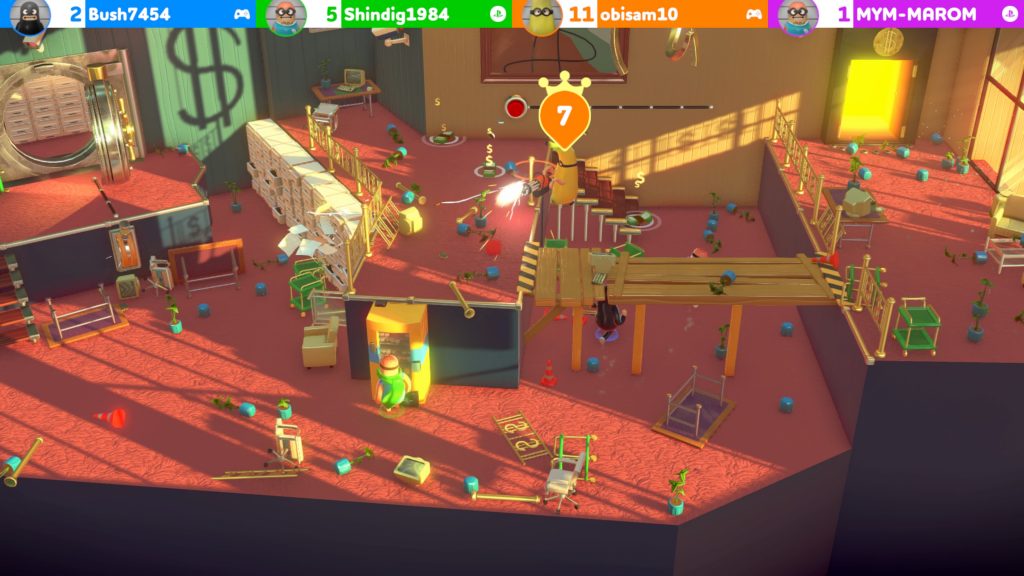 Weapons are easy to come by. Improvising with furniture or whatever at hand can provide plenty of coverage. For the more lethal option, there are guns, grenades and hammers littered around the arenas. Being hit is never a permanent problem but it does allow players to be knocked out temporarily. When hit, all loot is dropped so there’s incentives to throw down. Combat carries a good weight and it can be satisfying to down a player and take their spoils. The destructible environments really add to the mayhem.

There’s variety to the weapons with plenty offering collateral damage. Bombs can create devastation whilst pickaxes offer a chance to knock walls and floors through. There’s only a couple of maps that specifically take advantage of that but it’s nice that it’s considered. Guns come with limited ammo and they all behave differently. Shotguns and rocket launchers come with hefty recoil that can knock you off platforms or throw your aim. There’s a Gatling gun that wildly pumps out bullets until it’s all spent. It helps add to the chaos and gives players plenty to think about. There’s an armoury you can visit to check all the wares out which gave me a chance to try them all out. 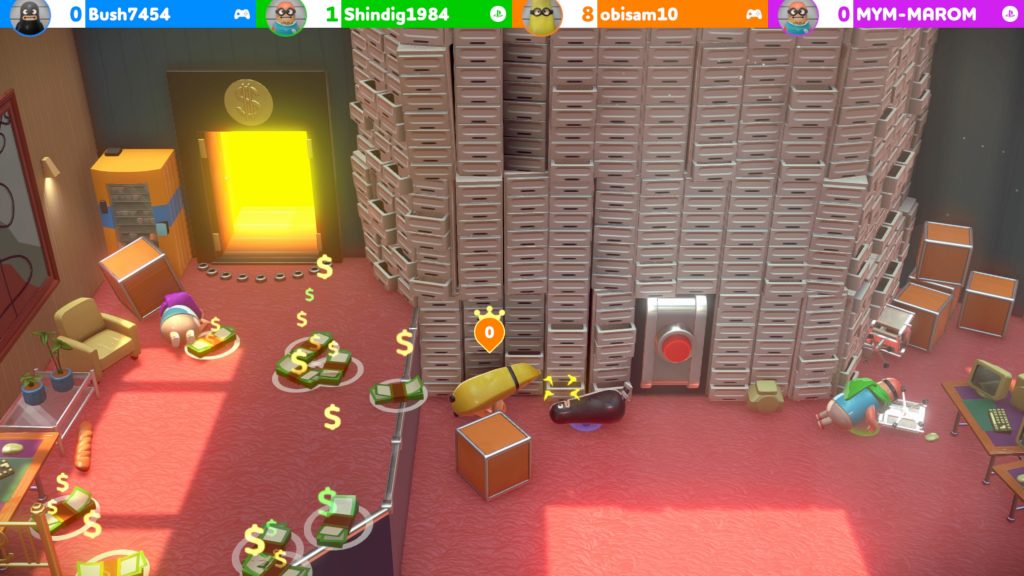 As well as an arsenal, there’s power-ups on hand to tip the balance of battle. An ice block can freeze all other players which comes in handy during an escape and a jetpack which can really help when navigating the levels. What I find is that, even with these, games can swing to-and-fro. I’ve never felt completely out of a match. They usually go at least three rounds and, whilst these rounds can be over quickly, there’s always time to claw some money back. It has a good flow, although you will see every location in pretty short order.

There is an option for team play which does allow players to pass loot between themselves. I’ve tended to fly solo but the possibility for coordination does open up potential strategies. It’s a pity there’s not much else here in terms of modes. Everything can be played online and locally and, aside from the Heists, you can partake in brawls and an arcade mode. Brawls effectively task players with knocking each other out whilst the arcade mode pits you up against spawning police officers. It stays very close to Heist but feels like a more crafted challenge on the usual maps.

I didn’t find these modes as compelling as the standard heists but I’m not entirely sure what you could do to expand upon them. Arcade mode feels largely forgiving with only the final vault delivering a stern task. You can opt to leave a level empty handed and still progress and there’s a clockwork response from the opposition when the exit door swings open. I mainly saw it as a good way to view the dozens of locations before diving into competition with real people. 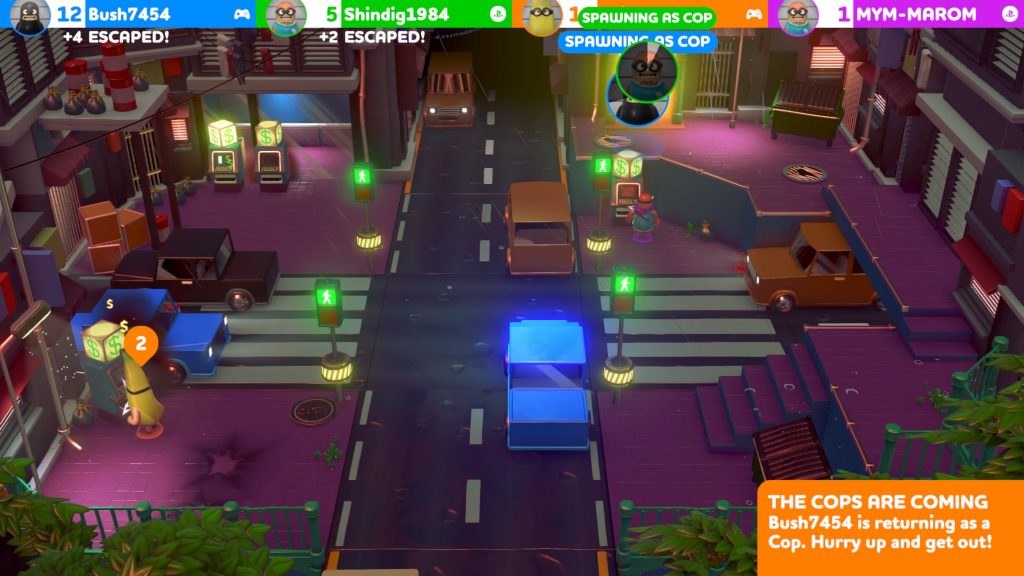 I do like how flexible it is. Matchmaking doesn’t hold you for long and each lobby has a room code that you can use to invite friends. Cross play can be enabled which is probably why I’ve not struggled to find someone to play with. One thing that does irritate me is the inability to pause a game, even if I’m on a single-player arcade run. I get that this game wants to seamlessly allow anyone to drop in and out but it does feel odd when I can’t pause something playing solo. I’ve had some connections drop but, for the most part, it’s holding together.

I’ve enjoyed my time with Rubber Bandits. The dozens of maps keeps rounds fresh and the combat feels weighty. It does feel slim on modes but the option to team up does add something to the table. I’m not sure how much longevity there is but it works well in short doses. The aesthetic is bright and cheery and rounds have a nice flow to them. This is worth taking a look if you want something to try with friends.

Rubber Bandits
7 Overall
Pros
+ Has a really colourful and polished aesthetic.
+ Simple to pick up and play.
+ Rounds are fast and frenetic.
+ Destructible environments add to the chaos.
Cons
- A few modes that don't entirely standout against the heists.
- No way to pause single-player modes.
- Online performance is occasionally spotty.
- Some of the maps look very similar and lack variety.
Summary
Rubber Bandits is a well-made brawler that does feel a little light on modes. Heists are fun and frantic and carry a good flow throughout. Combat feels weighty and the destructible environments make for plenty of chaos. Online play can feel a little sketchy at times but the matches I have been involved with have come with a nice brand of mayhem.