Nuclear Corps is an arcade/puzzler which comes by way of the PlayStation Talents programme.  It’s full title is actually Nuclear Corps: Veterans in Fukushima and it is inspired by the Fukushima disaster in 2011 where an earthquake and tsunami triggered a meltdown of a nuclear energy plant in Japan.  That day a group of veterans volunteered with the clean up operation and this game follows that theme.

While seen from above in polygonal 3D, the game is best compared to the old 16-bit classic The Lost Vikings.  Like that game, you control three characters, each one possessing different skills and you have to use all of them to get each person to the exit on each level. 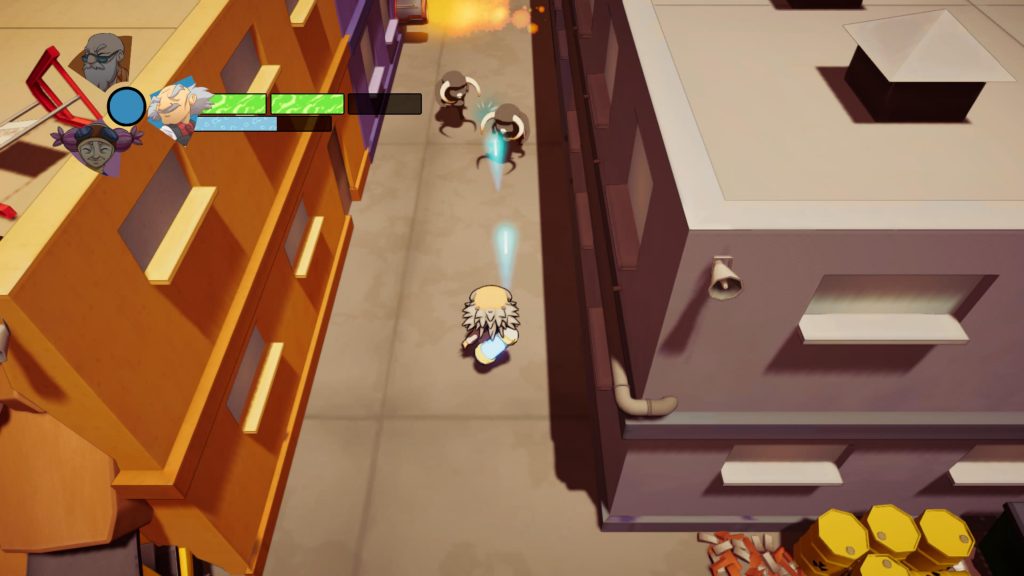 You’ll need all of those skills though because Fukushima is now a dangerous place.  However, if you were expecting a realistic simulation, this isn’t it.  For starters, your three operatives are all dressed more for the beach than for a failing reactor and the cartoony presentation is very much at odds with the sombre inspiration behind this game.  So instead of fires and rising radiation levels, your main threats here are monsters.  Mutated beasts that will attack on sight.

Thankfully one of your characters has a gun.  It has a pretty harsh cooldown window but it’s more than enough to take out the creatures that attack you, especially as most of them have incredibly basic AI.  Another character has a big shield, and can also push and pull some objects, while your one female operative uses a grappling hook to get around the levels, as long as there is a grapple point nearby. 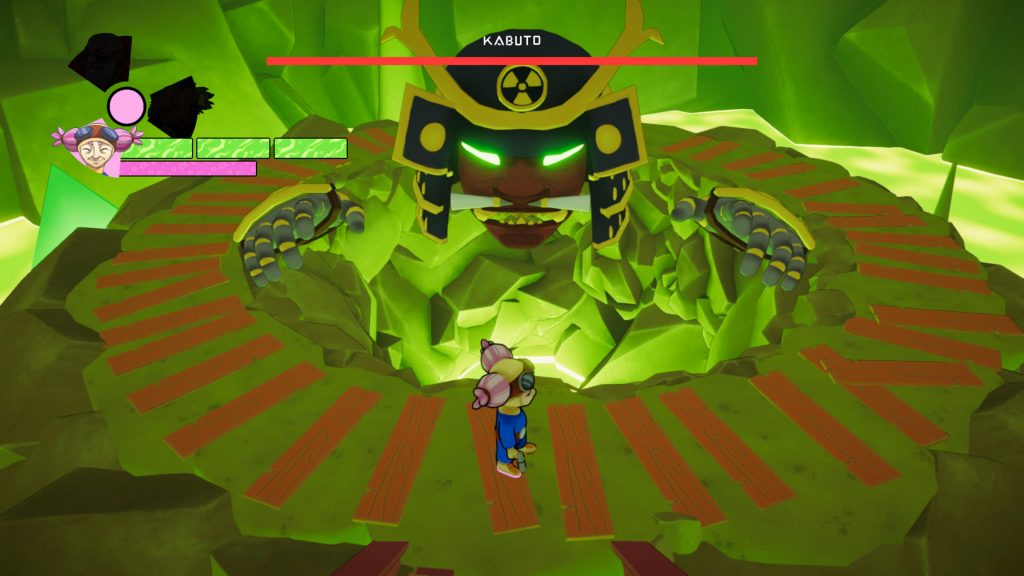 The levels are quite short and usually pretty easy to figure out.  Send in your armed guy to clear out the monsters.  Use shield guy to push a box or crane into place.  Use grappling woman to get to some otherwise unreachable place to activate a lift or open a door.  It doesn’t take much to figure out what the game needs you to do to get through it.  And initially it’s all reasonably enjoyable with gentle puzzles and simple enough combat.

Throw in a few boss battles to keep it interesting and you should be onto a winner but unfortunately the game just isn’t executed very well at all.  Your movement is pretty slow and cumbersome for a start, which making combat feel pretty stiff but, worse, it also makes the puzzling quite unintuitive.

For example, on one level I pushed two cranes into place to allow for some grappling but my character kept dying during the grapple process.  So I tried the level a few other ways but it was clear that my first instincts were right.  She was meant to grapple to a certain platform.  I tried it again and it worked.  Now, there’s no room to mess it up.  It should just work but it didn’t just work.  The environment wasn’t responding correctly to my movements. 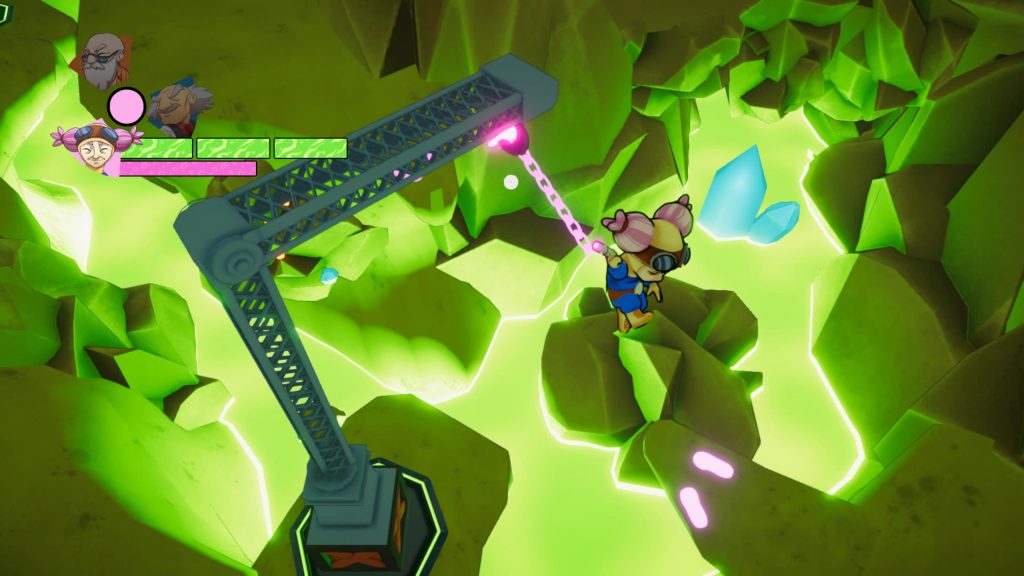 This happened a few times when pushing boxes.  The box would just get stuck in certain places but it was never because it wasn’t meant to go there, it was because of some sort of bug with the collision detection that was stopping things from moving correctly.  And that’s a problem because often you have to time your pushes between bursts of flame coming out of pipes.  Timing is important, so getting stuck on the scenery just isn’t acceptable.  And these aren’t hard problems to find, they’re unavoidable which makes us think that there just wasn’t enough playtesting here.  Maybe the PC version got tested but the PS4 one clearly didn’t.

In the end we got sick of losing characters due to these problems  and it was enough to be game-ruining for us which is a shame because we quite liked the level layouts and were prepared to forgive the clunky moving and shooting mechanics but when it starts feeling like the game is working against us, we lose interest pretty fast. 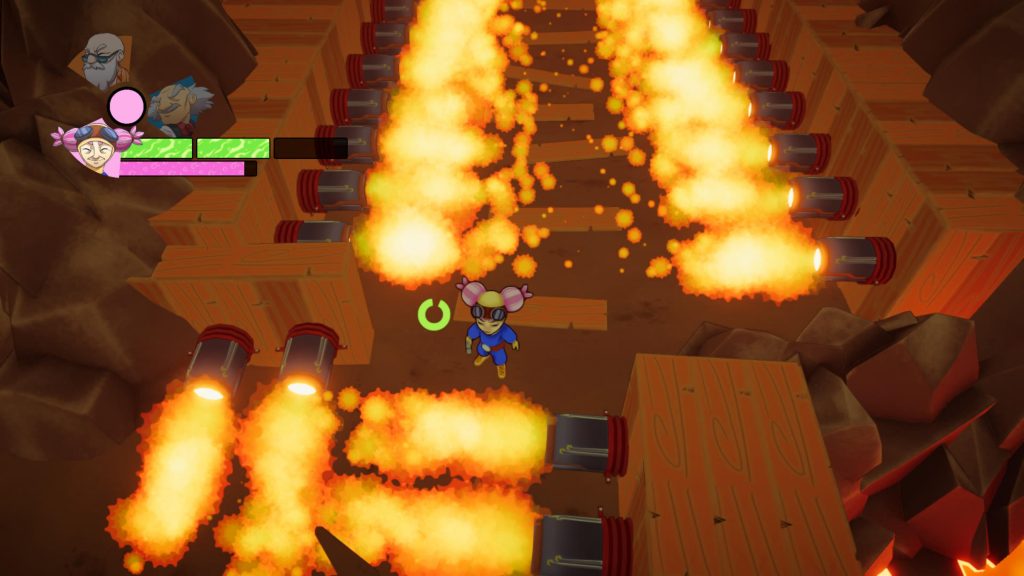 And while the cheery cel-shaded visuals are a little out of place, there’s really not much here that even looks like a nuclear plant so we can forgive that and just treat this as the cartoony puzzle game it is.  It doesn’t look great though and really just looks like a cheap Dreamcast game.  It kind of feels like one too.

So while we can get behind the core character-switching, puzzle aspects, Nuclear Corps probably would have benefitted from a few hundred hours of playtesting and maybe a couple of decent coders on the team.  Instead it feels like what it is, a good idea let down by poor execution.