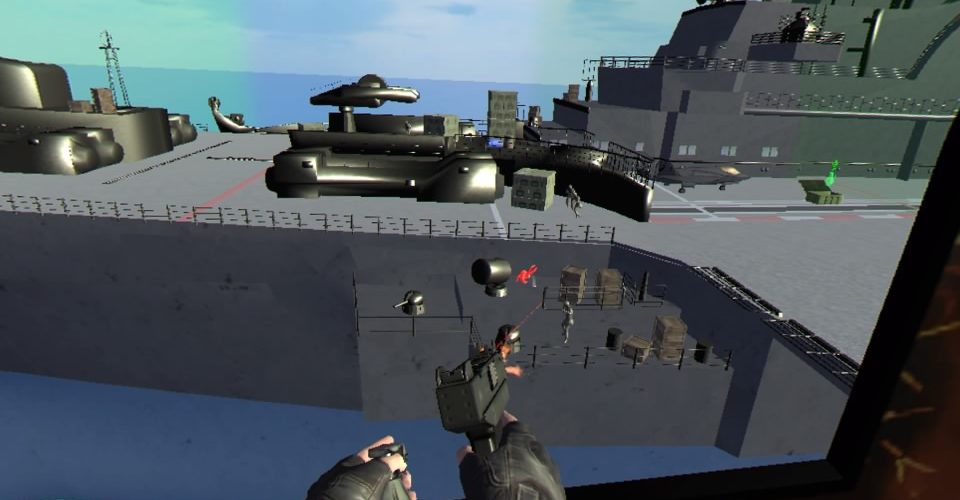 Trying to bring the nostalgia of the arcade onto PSVR, Ivanovich Games has released Operation Warcade. Upon starting the game you’re in a reasonably busy arcade. People are playing the surrounding games but you can only interact with what’s in front of you, a cabinet with an Uzi attached to the front.

As some people of a certain age might realise, the specific game in question that Operation Warcade is trying to remind you of is Operation Wolf. A lot of the design choices are influenced directly by the 80s classic, though it does have some ideas of its own. 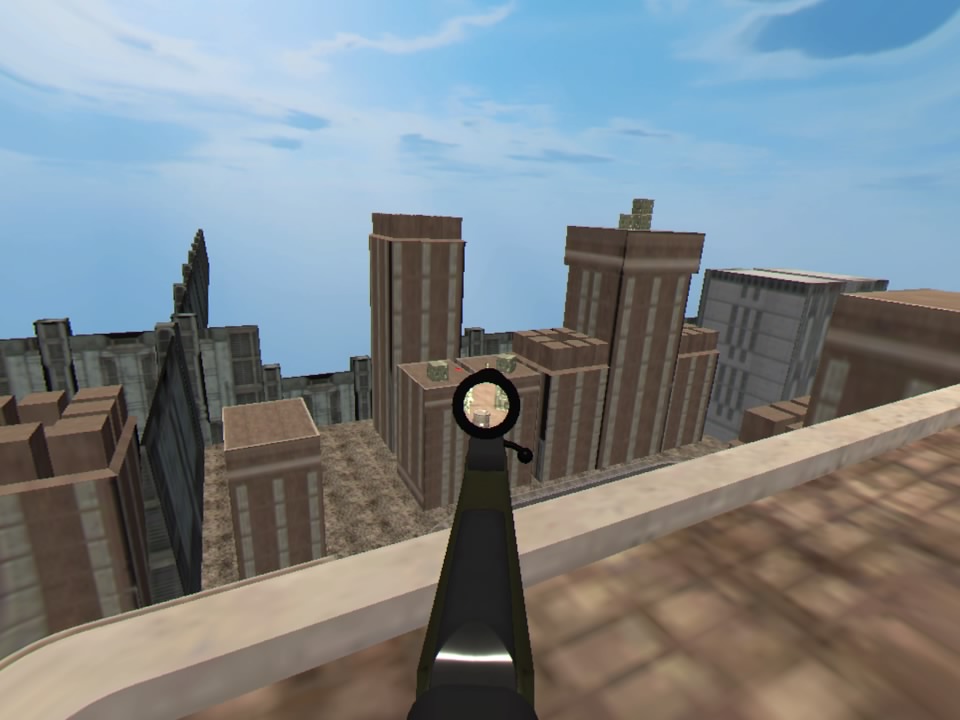 You can use a Dualshock, two Move controllers or an Aim controller to play which is very welcome. If you use the Move controllers then you have a grenade in one hand and an Uzi in the other, the Dualshock also has this but rather than the natural movements of the motion controllers you simply use

to throw the grenade, but the camera does track the movement of the controller to aim. Using the Aim controller the two hands are replaced with one assault rifle with a grenade launcher attached. They basically provide the same experience but with some minor differences and pros/cons.

If you’re using the Dualshock or Move controllers then there are two cabinets in front of you, Immersive Edition and Classic 3D Edition. For some reason using the Aim only gives you access to Immersive Edition. They are both basically the same but Classic 3D Edition plays out like a normal arcade game, progressing through the six levels as you shoot the Uzi at the screen in front of you. Immersive Edition lets you select levels and you can actually lean forward a bit into the screen and look to the left and right. There’s also more content and reason to play.

There are six different environments and six levels within each setting. You only have access to one to start off with and you unlock more as you collect enough medals. You earn medals by completing specific challenges in each level, completing the level will get you points but does nothing to help you progress unless you manage to successfully complete these challenges along the way. You’ll also unlock perks as you accrue medals that can be activated and deactivated as you please, like bigger grenade explosions or faster firing rate for shotguns. 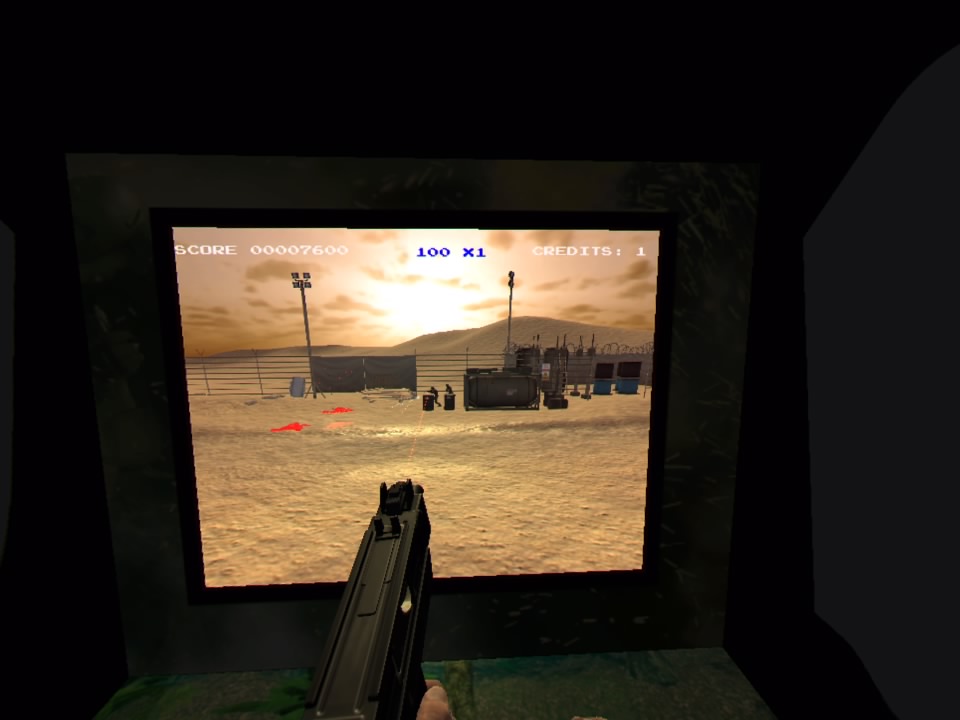 Challenges can include things like getting a certain amount of kills, kills with a specific weapon, a number of kills with one grenade, headshots, saving prisoners, etc. Although initially you’ll be making progress quite easily you may have to go back to try for medals later on to unlock levels but they only last a few minutes each so it’s not too painful assuming you don’t get too stuck.

Each level has you slowly panning from left to right. Enemies run or warp in and you shoot them. Give them long enough and they’ll start shooting at you, making your screen flash red slightly. Get hit too many times and you’ll die, but generally this isn’t a problem. Even if you do die you have unlimited continues (in Immersive Edition, limited continues in Classic 3D Edition) so you can proceed with the level. As well as normal guys with guns there are guys who throw knives (which are one hit kills but you can shoot them out of the air), APCs, helicopters, gunboats, drones, mortars and jets which try to bomb you.

As you move across the levels you’ll find special grenades to pick up which can do a variety of things like slow time, freeze enemies or alter gravity. There are also Immersion Points. There will be a box sat on top of a truck, in a snipers nest or in a helicopter for example and when you shoot it you’ll be transported to that location to fight within the level. From here you may be driving a truck with one hand whilst shooting your Uzi with the other (or you’ll be using the analogue sticks with the Dualshock and Aim), picking off guys from afar with a sniper rifle, flying a jet or using a minigun mounted on a helicopter. Move users will get the chance to use a bow and arrow as well whereas others will have this replaced with a similar experience, but using a shotgun or perhaps a rocket launcher. 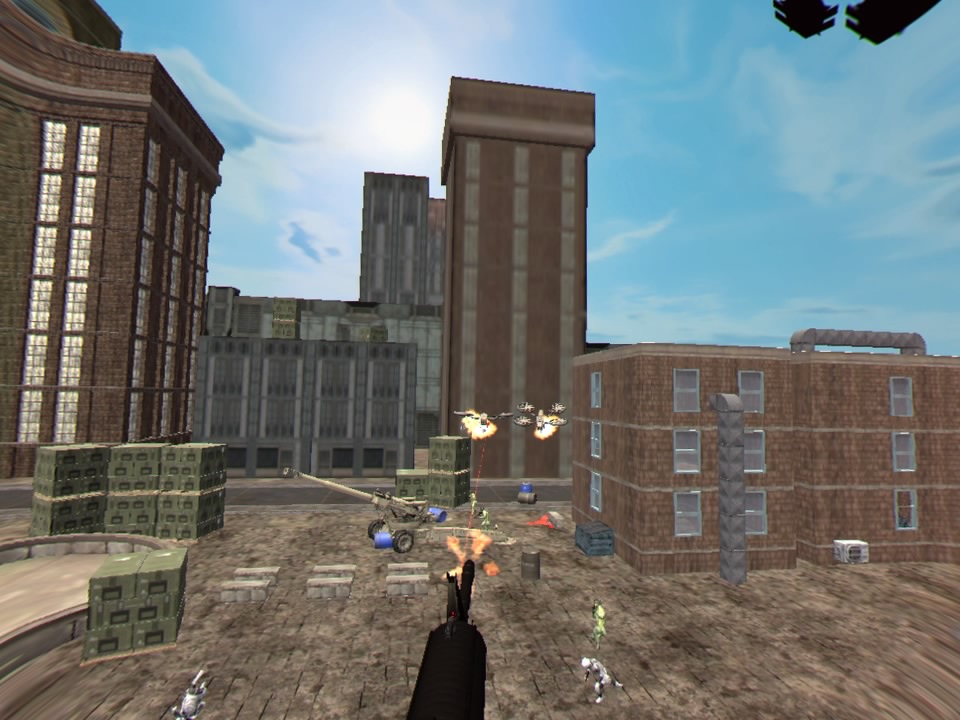 The transfer takes a little too long (the screen fades to black before fading back in after a few seconds), taking you out of the action whereas a quicker transition would be more exciting. In fact the whole game could do with being knocked up a notch to be made more hectic. As things are the pan is quite slow, which is fine, but there are often periods where you’ve killed all the enemies and are waiting for more to spawn. The need for enemies to run onto the screen means you can clear a lot of them early and you’re left twiddling your thumbs. Of course there are times when the screen will become overrun, later levels having more places for enemies to simply spawn in place and start shooting but these moments are rare.

The other thing that doesn’t help with the excitement are the graphics. Rather than the low pan of Operation Wolf you’re very high up looking down on the action. Enemies look tiny and in the levels where they appear further back you can struggle to see them, let alone shoot them. Your hands and the gun models look fine and enemies look okay at a distance with okay animation and ragdoll but the environments look terrible. Like they’re unfinished. Since most of your screen space is filled with the environment it’s hard to ignore. They aren’t ‘lo-fi’ on purpose to add to the nostalgia, they’re just bad to the point where I’m not sure what generation they’d even be from. A bad DreamCast game possibly? I’m not one to usually comment too much on graphics as you’ll know if you’ve read other reviews by me but when they’re right in front of your eyes and this bad then they actually have a negative effect on the experience.

Muddy textures, pop in, weak explosions and barren worlds detract from what could have been a fun, if simple, distraction. There are hints of it with the ability to shoot apart the supports of a tower, explosive barrels or shoot out windows in buildings but if you were closer to the action, with a more interactive world that reacted to your missed shots in realistic or interesting ways then it could have been a spectacle but as it is it is one of the more straightforward VR games I’ve played. 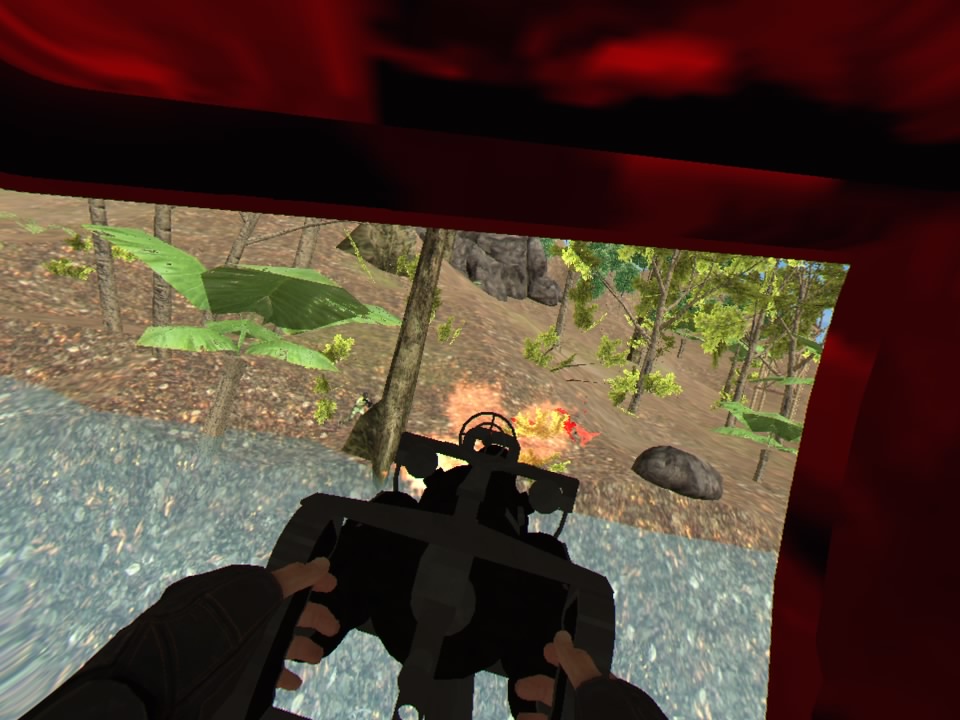 That’s not to say Operation Warcade isn’t fun in short doses. The medals do encourage you to replay levels and the Immersion Points are original and add an extra dimension to things. There are better games out there on PSVR right now at a similar price but if you’re looking for a simple VR experience that uses whichever control scheme you may have access to then this will keep you entertained for a bit.

Operation Warcade
6 Overall
Pros
+ Immersion Points are an original idea
+ Medals encourage replayability
+ Three controller options
Cons
- The graphics are terrible
- Not quite hectic enough
Summary
Operation Warcade is fun in short bursts. The Immersion Point idea stops it being just another shooter and the medals awarded at the end of each level add to the replayability. It is ultimately a simple game that thanks to its poor graphics and the repetitive nature of the levels struggles to truly draw you in.