Risk System is a 2D horizontally-scrolling shoot ’em up that comes to us from Wisconsin-based coders, Newt Industries and is a port of the original PC release which came out in 2019.

You play as Alys, a pilot who has to take on a race of energy parasites that have infected human technology and turned it against us.  Alys is immune to their parasitic control but unfortunately her squad aren’t and so you’ll be taking on six levels of hardcore shoot ’em up action each punctuated by a boss battle against an infected squad member.  As ever, the plots in shoot ’em ups don’t really matter and you’ll be wanting to enable the menu option that lets you skip cutscenes after a while. 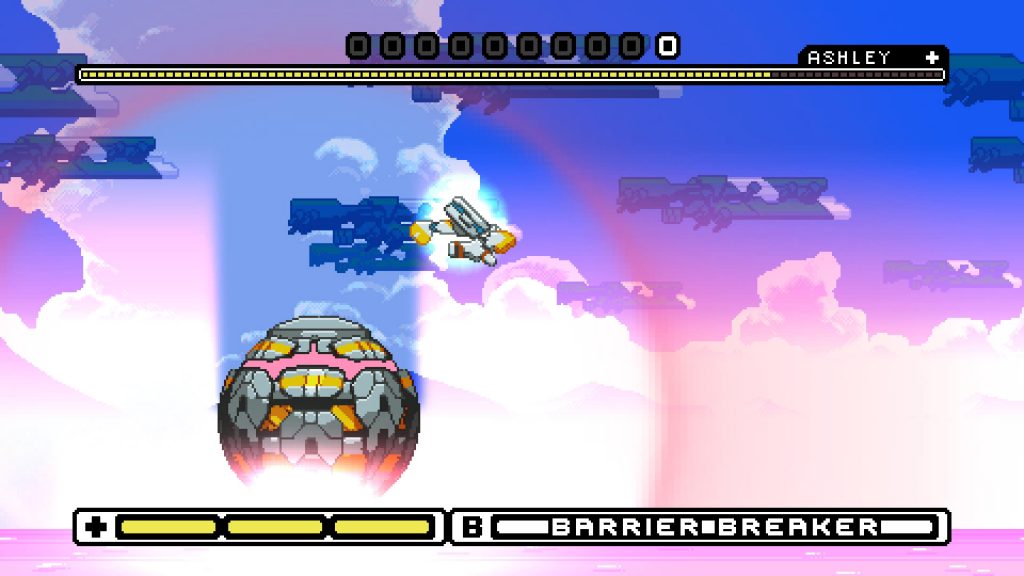 In terms of the gameplay, Risk System is a mix of ideas, some familiar and some less so.  As expected, you pilot a ship as it heads rightwards towards and indeed through enemy territory.  You move your ship with the left stick or d-pad but you don’t, by default, have a fire button.  Instead your ship shoots automatically whenever you are aligned with an enemy.  It’s a bit odd and initially gives the game the feel of a mobile game but there is an option to enable manual firing if you prefer.  We turned that on but then turned it off as it didn’t really make the game play much different because, much like any other shoot ’em up, we tend to just hold the button down.

The other face buttons are reserved for barrel-rolling up (

).  That attack forms a large part of the core game mechanic that gives Risk System its name.  Your ship has a B-Meter that powers the Barrier Breaker and you fill that up by flying close to enemies and bullets.  Grazing those also gives you a short boost to your primary weapon and also makes defeated enemies drop health pick-ups, so it’s worth taking the risk to do it. 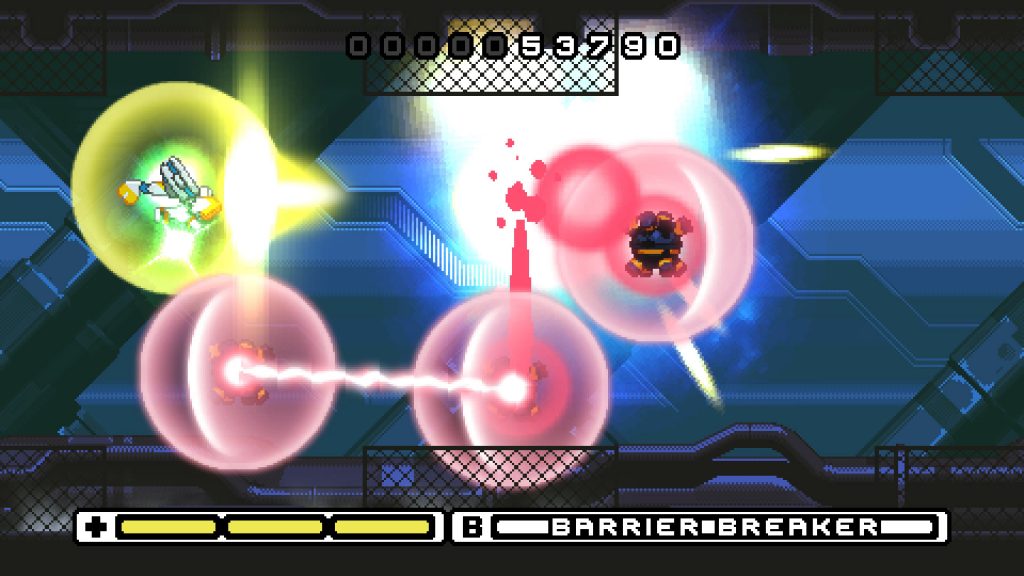 We absolutely love risk vs. reward gameplay and Risk System executes that pretty well.  It’s a mechanic that suits shoot ’em ups in particular and if we were talented enough to be able to make shoot ’em ups, we would always use it.  We think back to Omega Five on the Xbox 360.  It was a near-perfect shoot ’em up that was just about easy enough to let half-decent players finish the game but then it also had a clever combo system that meant that you had a reason to keep going back to it to strive for a higher score.  Risk System‘s rewarding risk mechanics are strong enough that this game should be able to do the same.

Unfortunately, there’s a big fly in the ointment.  Well, six of them actually.  The bosses.  They’re just too difficult compared to the rest of the game and they will ruin an otherwise great and risky run very quickly.  For some stupid reason, the bosses don’t drop health pick-ups which makes the risk system just too risky to use.  Plus they rely on a lot of memorisation, that magic ingredient that turns shoot ’em ups from being fun to being a chore. 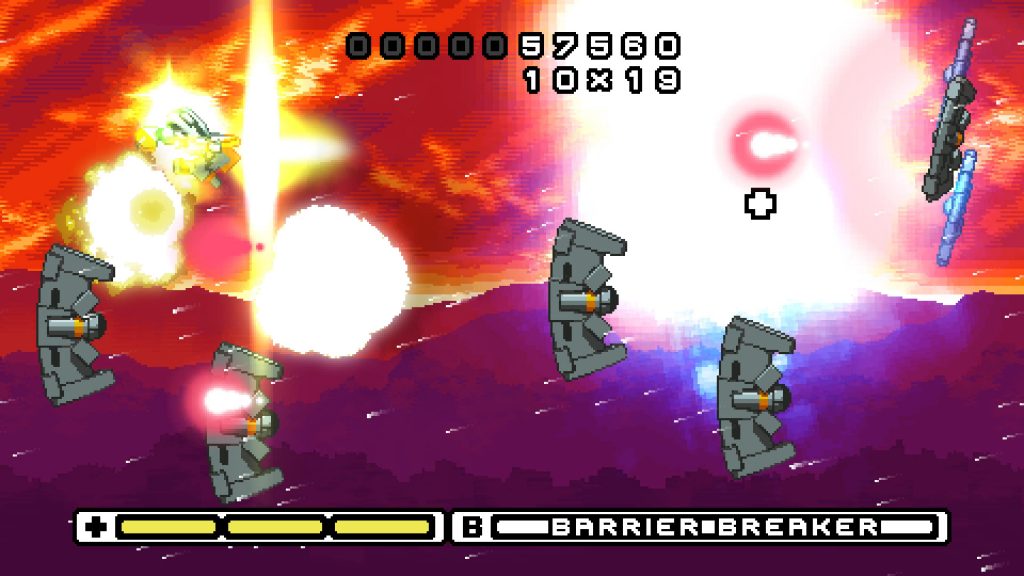 It’s a shame because there’s a really good shoot ’em up in here but the balance is just a bit off for us.  This would all be solved by throwing in a difficulty level modifier or just softening the difficulty spikes that these bosses create but they’ve not done that and so really the boss battles just feel at odds with the rest of the game.  That said, beating the bosses (eventually) is quite rewarding but it just turns Risk System into a different, much more traditional game.

The presentation is pretty good though.  The simplistic 2D sprites and slightly cheaty backdrops (they loop a lot) do work well in terms of keeping the action clear while the on-screen firepower adds bright light and bold colour, as do the exploding ships.  Too many shoot ’em ups have enemies dying unspectacular deaths where they just dissolve, so it’s nice to see the parasitic bastards go down in blazing explosions. 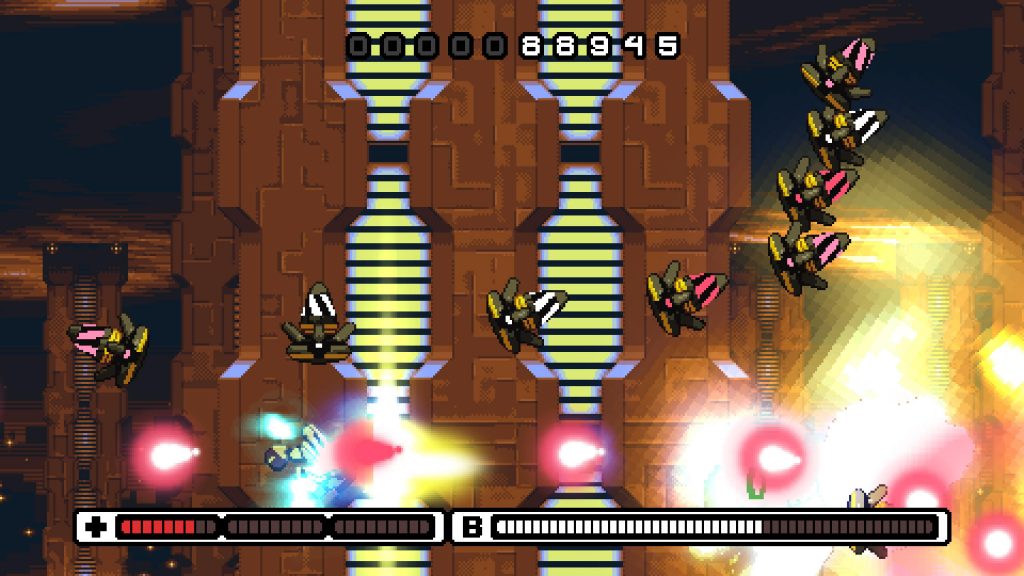 The sound is suitably exciting too with a decent soundtrack and good effects.  There’s no voice acting on the cutscenes (and they can be annoyingly placed before those boss battles) but we stopped caring about the plot pretty quickly on this one.

In the end, what you have here is really a game of two halves.  The main levels are full of exciting and rewarding shoot ’em up action that is fun and accessible but it’s all just a bit hampered by these boss battles that are a bit of a slog, not very intuitive and frankly not any fun at all.  They don’t ruin the game as such but they do ruin the potential for Risk System to be something special.

Risk System
6 Overall
Pros
+ Risk mechanics have great potential
+ Well-presented visuals
+ Main levels are good fun
+ Beating bosses can be rewarding
Cons
- Boss battles aren't much fun and are at odds with the rest of the game
- Quite short
- Game feels like a mix between an accessible fun shooter and an unenjoyably hardcore one
Summary
Risk System is a well-presented shoot 'em up with a lot of potential but the boss battles ruin the flow of the game, instantly switching the gameplay from a satisfying mix of intuitive action and risk vs. reward mechanics to tedious and difficult encounters that rely on memorisation. There's something here but the difficulty is just too uneven.