If there’s one genre I tend to tiptoe around, it’s tactical turn-based RPGs. I’ve never really found one I’ve enjoyed and I do struggle to find a foothold in them. Hopefully that will change with Battle Brothers. Coming from Overhype Studios, this has had a fairly positive reception on PC. Now there’s a console version imminent and, to be honest, it translates to controller pretty well. 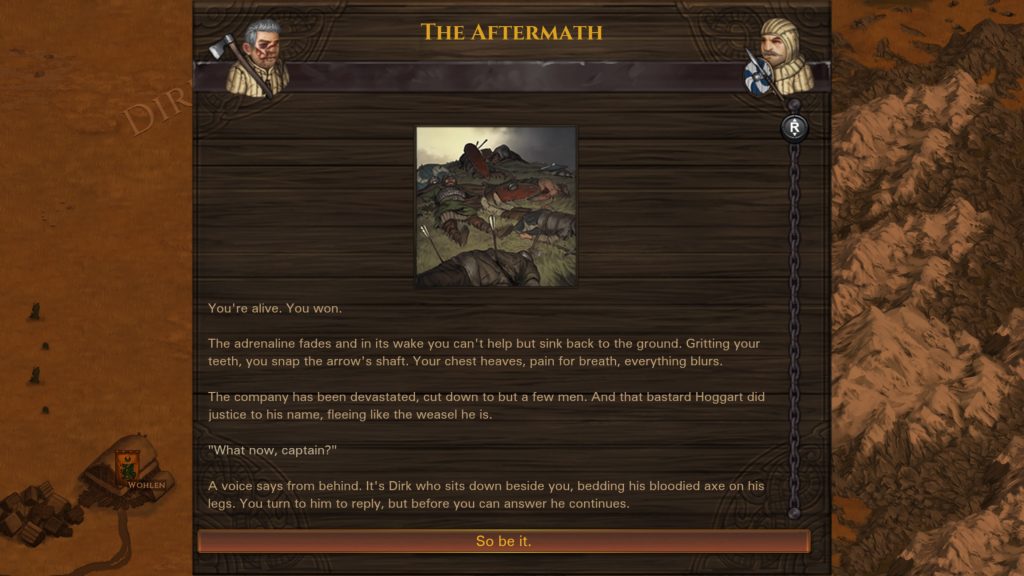 Battle Brothers places you in charge of a fledgling company of medieval mercenaries. Your goal is to survive against rival companies, savage beasts and bandits as you look to forge a reputation and fortune with your motley crew. It ultimately operates on two fronts. An overworld map connects towns and settlements your company can travel to. There you can trade, hire new faces and gear up. You can also except contracts that will put you in good standing with the locals. Time advances on the road and days can go by fairly quickly. It does add further pressure on resources like repairs and your provisions.

It’s the closest thing Battle Brothers has to down time but the management aspect feels vital. Preparation is the key to victory and it’s a real tragedy Battle Brothers can’t effectively educate players through a good tutorial. There is a tutorial campaign but, whilst it does deliver things at a slower pace, it doesn’t explicitly teach the player. It’s a trial by fire experience and you’ll probably be resorting to your intuition, wiki guides and videos just to get a grip on a best approach.

That said, I do enjoy pouring through fighter stats and carefully considering what contract to go for. It helps if you have a goal in mind as wandering aimlessly seemed to land me in early trouble. Each town has different facilities to being mindful of the local vicinity does come in handy. Stopping off at taverns can give you some information and keep your troops’ spirits up, temples can help patch up their injuries. Every decision feels important and Battle Brothers does feel mechanically dense. Initially, I found it quite daunting but, after a couple of aborted runs, I found my footing. 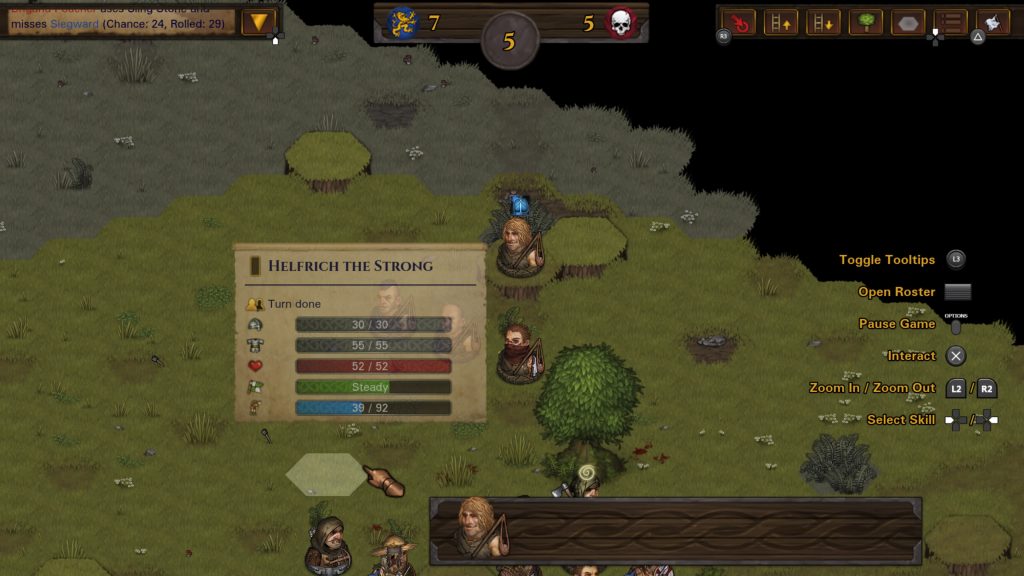 The other half of the gameplay focuses on combat. Your men line up on a grid to do battle with an opposing force and you can set up a front and backline. Typically, your ranged attackers will be behind a line of melee fighters and you move across the board expending ability points. Battlegrounds will vary, some with cover, high ground and even the ground you walk on can make a difference. Fighting on hot sand can exhaust your recruits, for example.

Taking the environment into account makes for a deep, tactical battle that does make success feel rewarding. Each member of your crew will have their own set of skills and survival in combat gains them experience. Levelling them up allows you to improve their attributes and bestow them with perks which all seem fairly useful. It can also lead to you giving your big-hitters protection with your newcomers acting as fodder.

Battle Brothers does mention it’s difficulty right off the bat so comparisons with games such like the X-COM series are duly warranted. I do feel they’re comparable but I do feel Battle Brothers is a touch more forgiving. In battle, the human opposition you face are often wearing gear you can recognise by sight. It’s an easy visual cue to help you size up foes and very helpful at the start of a battle. 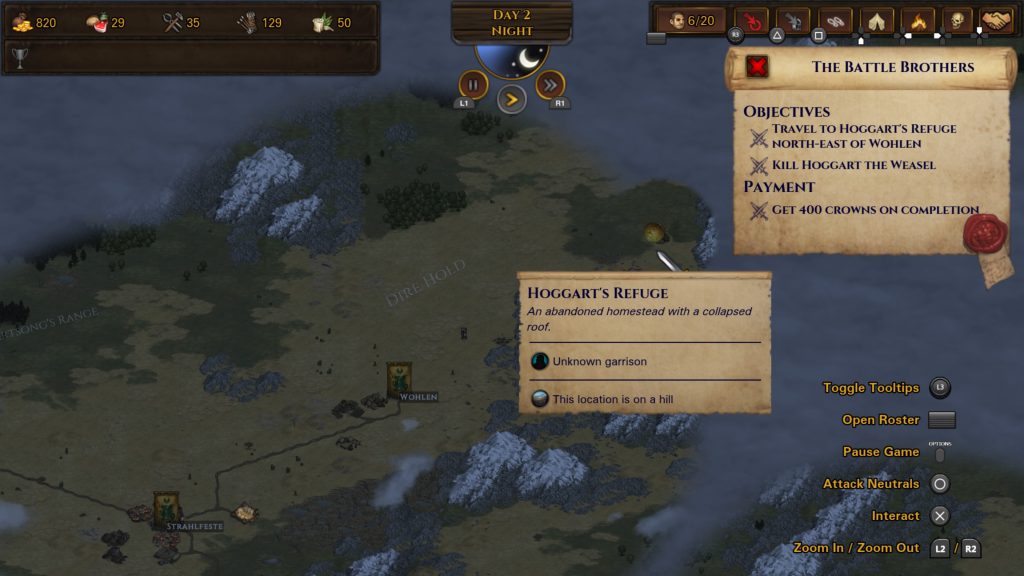 You can plunder loot from the opposition with greatly helps reduce your costs and there’s a heavy financial churn that comes from the running of a company. Brothers have an upfront cost as well as a daily rate. Most of them will feel expendable until they start to gain in levels. Ideally, you don’t want to pay for something you can get for free but you don’t always get that luxury.

You can camp out in the wilderness to recover but this does leave you at risk of being ambushed. Even on courier contracts, there’s always the chance of getting jumped. Every chance to stop and take stock is welcomed and it does lead to a tense experience. Losing a stalwart of your company can feel devastating and that kind of attachment is only hammered home by the obituary tab.

Each game runs until you decide to retire or your company expires. Typically, the late-game triggers at Day 80 of a campaign but can drag on for as long as it remains unresolved. These range from undead scourges to outright holy war and these serve as a campaign’s climax. You can play beyond them but these serve as Battle Brother’s greatest challenge. The randomly-generated nature of the maps does add some uniqueness to each playthrough, although the time on the calendar largely dictates the pace at which the proceedings play out.

Other than the many campaigns, you can play through scenarios to sharpen up specific combat skills. They range from easy eye-openers to late-game gauntlets and do allow you to practice the art of warfare without putting your company at risk. In the absence of a more conventional tutorial, these are handy. 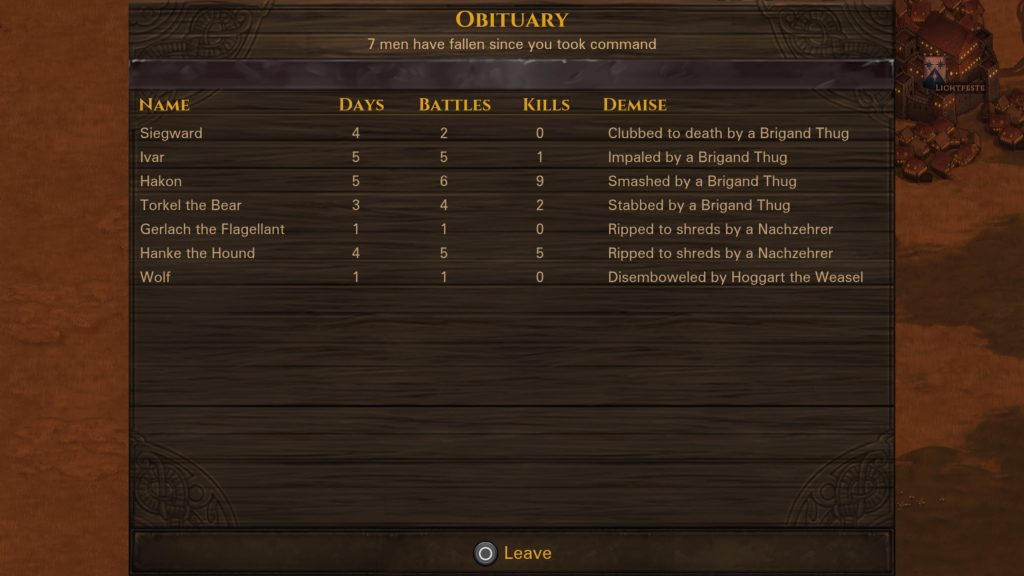 Aesthetically, it’s not doing anything special. The visuals are clear and it does have a tabletop feel with how each fighter looks like a piece on a board. Battle Brothers imparts a lot of information to the player by text which is fairly easy to read, if occasionally cluttered. The battlegrounds and towns look diverse but some of your fighters can blend together. You do have the option to rename and change their appearances but visuals are largely born out of function than flourish. The same can be said of the soundtrack which I barely paid attention to. The screams of battle are nice.

I feel like I’ve barely scratched the surface with Battle Brothers. It does suffer from a lack of a genuine tutorial but a dedicated community has some crucial resources for new players. There is a deep and engaging game here with plenty of tactical decisions to appeal to armchair generals. The challenge is steep but rewarding as you drag your crew from settlement to settlement. It’s not to everyone’s taste but I find the day-to-day management of a doomed brigade fairly compelling.

Battle Brothers
7 Overall
Pros
+ Incredibly deep with rewarding combat.
+ Randomly generated campaigns lead to plenty of surprises.
+ Combat scenarios help sharpen your skills on the battlefield.
+ Outside of combat, the management aspects are incredibly well-realised.
Cons
- Lacks a genuine tutorial.
- Difficult for newcomers to ease into.
- Bland presentation.
- The amount of information on screen can be overwhelming.
Summary
Battle Brothers is a dense tactical RPG that would really benefit from a more explicit tutorial. It's a hard game to get into but I found my time with it to be tense and rewarding. Preparation before each battle feels crucial and most of the decisions I took felt weighty. Combat is ultimately where most of your money is made and, whilst your brothers are expendable, escaping with a clean bill of health can be satisfying. Presentation is hardly spectacular and it can be clumsy at expressing a ton of information, but there's a compelling game here.