RetroMachina from developer Orbit Studio and English indie publisher super.com, is  a sci-fi action adventure. If we had to elevator pitch it, we’d call it Not Ratchet But Clank. You see, you also play as a defective robot. Only rather negotiating than a 3D environment, you’re in an exquisitely illustrated isometric view.

Your quest across the three lengthy stages is to unravel the mystery of what transpired with regards the absent human population. It’s not a huge revelation to discover it’s a mixture of human hubris and a robot uprising. So far, so trope. 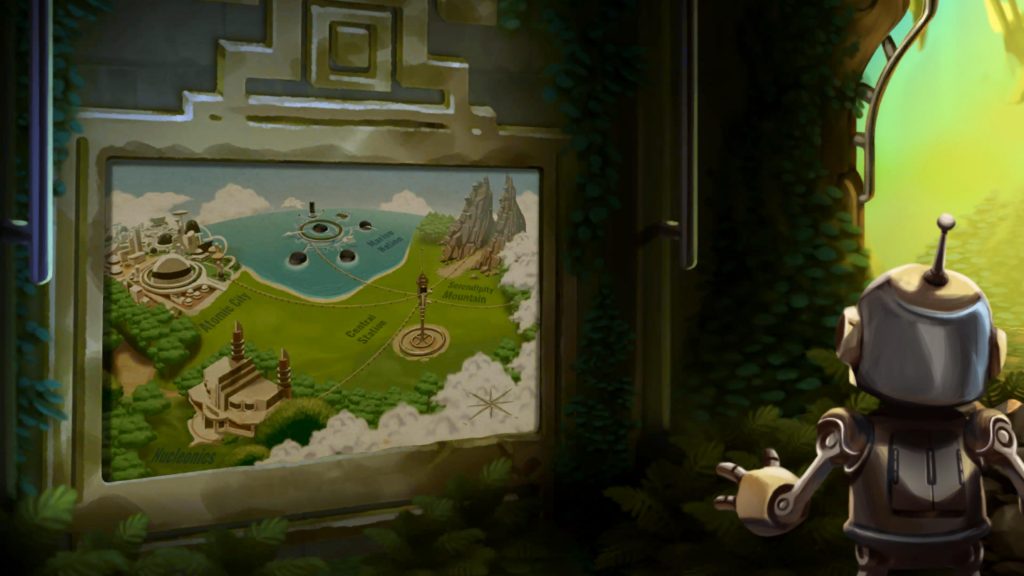 Practically what this means is you’ll be exploring through a series of gated areas populated by varying levels of hostile robot threat. At the outset they’re generally benign enough and you won’t have much trouble. But you’ll soon learn to use the tools at your disposal. Most significantly tapping

to take control of a robot. You move with the left analogue stick and your captured robot is moved with the right. This can be a little confusing but also incredibly useful as you evade other foes and attack them with your new pal. 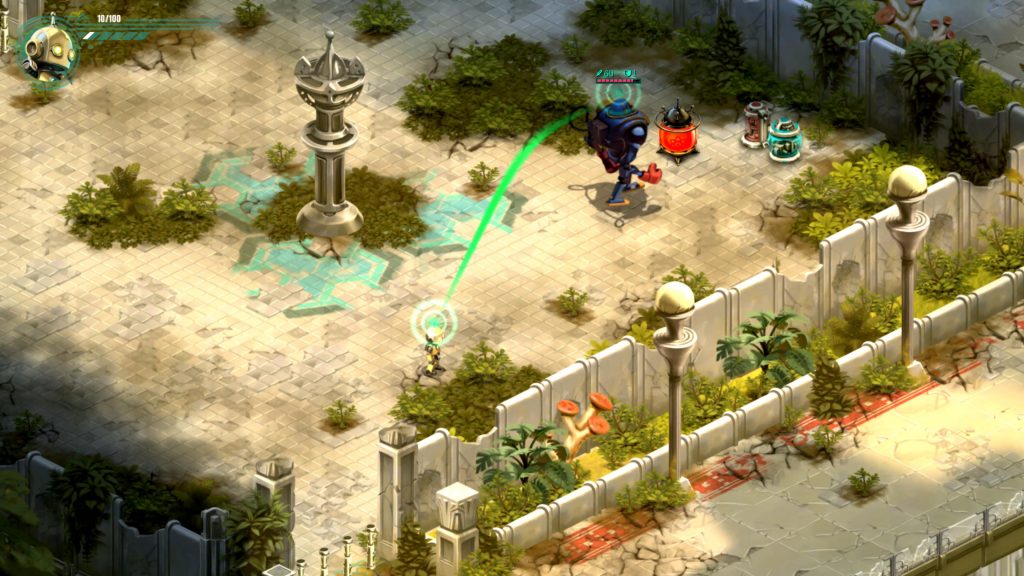 You’ll often have to control robots to stand on pressure pads to grant access to new areas, or from the second area onwards, move platforms to let you traverse gaps. It works quite well for the most part. The key thing is when a robot you control takes damage, you do too. This stops you taking control of a single enemy and unloading on them. It’s also important to remember when you’re attacking other robots with your obedient minion as they’ll retaliate upon being attacked. On a few occasions though, we were able to completely unload on an enemy without their reacting. Just dutifully standing there and letting you kill them.

As you explore you’ll come upon miniature arenas with automated bollards on each side. A bit like a car park, only instead of paying a fee to exit, your payment is to destroy the enemies within. It’s a little formulaic at times and some fights can feel a bit unfair, especially when you kill all enemies only for another wave to show up. 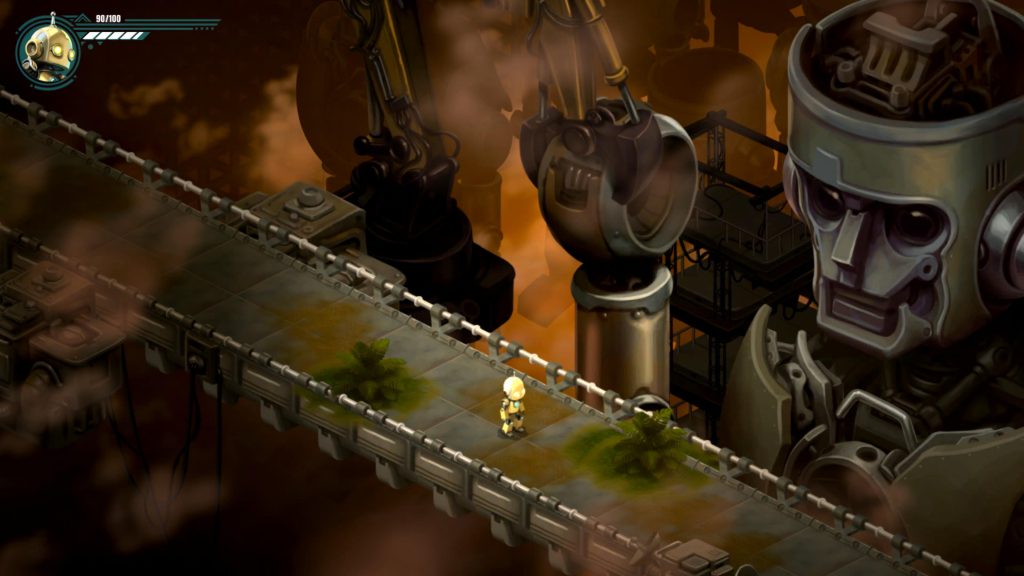 You’ll replenish your health and energy by destroying robots as well as ubiquitous resource caches. In the early stages you won’t have to worry beyond making sure you’ve got a decent health reserve as well as an emergency health vial. Additionally, you’ll find cores to  upgrade your health, energy reserves and abilities.

As well as consumables and upgrades, you’ll find letters and articles outlining the what led to the decline of Atomic City and the subsequent stages. They’re vividly designed in terms of the posters and art, but the terminal script used for text entries is just a bit too hard to see. It’s bad enough on a 42″ set, let alone a TV half the size that we have our PS4 plugged into. 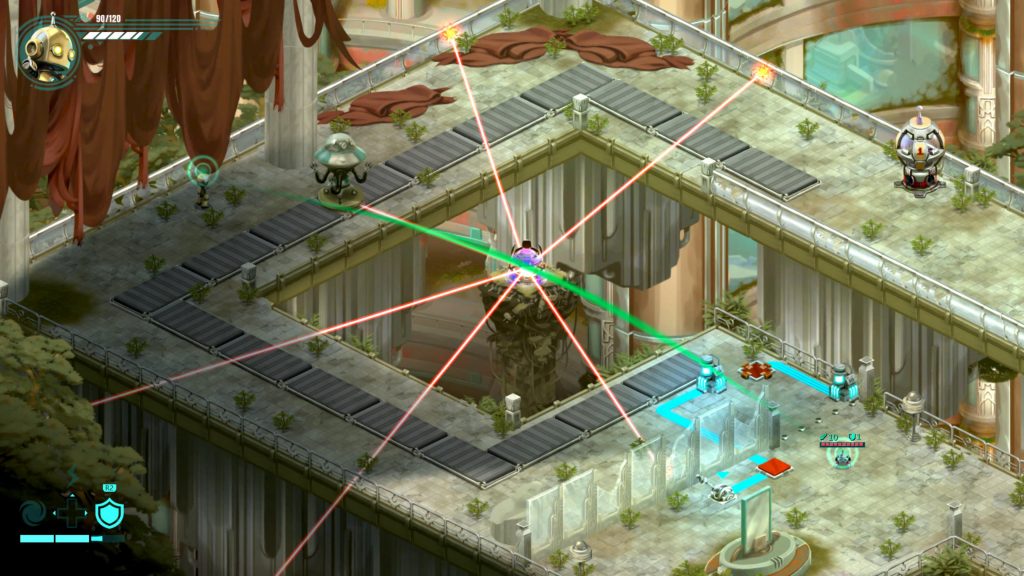 In time honoured fashion, not all doors can be opened at the outset, requiring a corresponding coloured keycard to unlock and progress further. Before we really got our head around how to progress, we often fixated on a particular enemy encounter thinking it was essential to our progress, when in fact it wasn’t.  Once we got past that, we made better progress.

We still found ourselves wandering around not being entirely sure about what to do next. This is felt most acutely when you enter a newly opened door but you then find yourself unable to go much further. Dead ends like this happen quite frequently here, so backtracking is very much a thing. 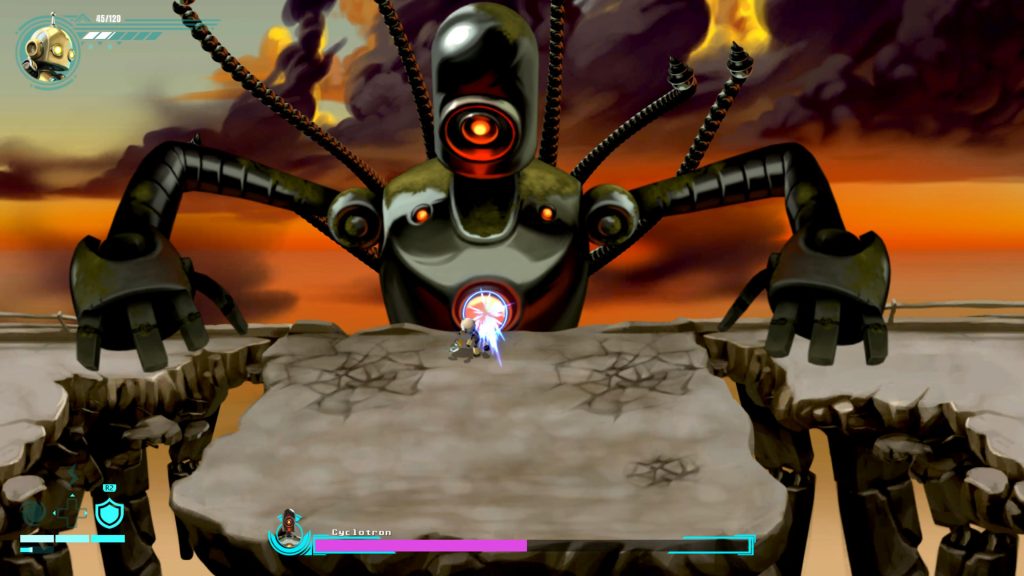 At the end of each stage you’ll fight a boss. Oddly we found the first boss harder to beat than the one at the end of the second stage, but by that point we’d upgraded ourselves sufficiently that we could unload our overpowered special attack repeatedly on the otherwise challenging boss.

Unfortunately during our playthrough, we got quite far into the third stage, we reckon 50% or so, before our progress ground to a complete halt. Two enemies that should’ve spawned didn’t and our quicksave has retained that state. We also can’t backtrack out as the robot we need to control to get ourselves back across the water is out of reach of our ability. 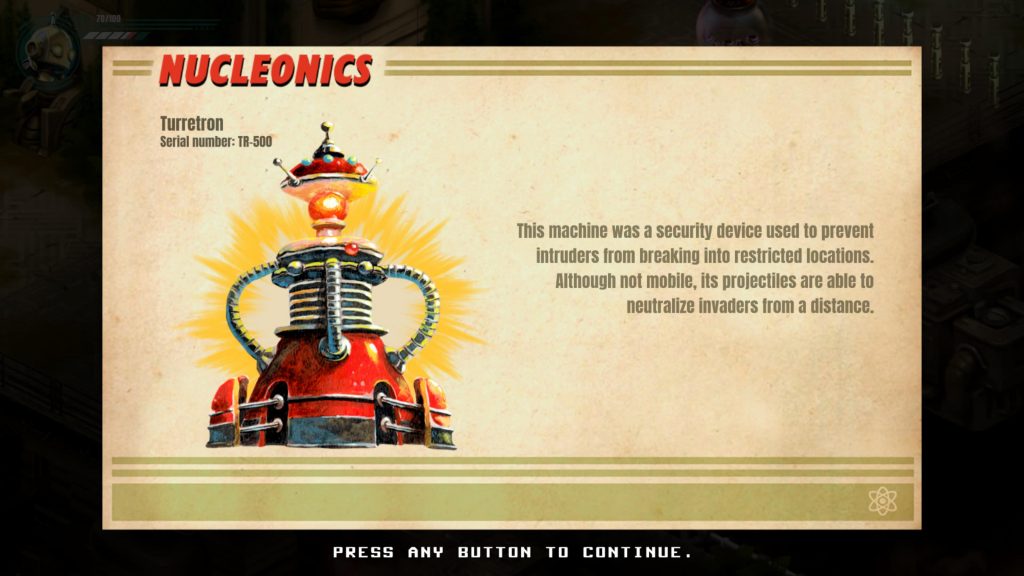 We thought it might’ve been a bug due to our playing on PS5, but no, we were able to replicate it on our secondary PS4 too. We’re hoping a forthcoming patch resolves the issue, perhaps allowing a recovery service of sorts as in Animal Crossing. Unfortunately the fast travel only allows you to travel directly between teleports, as opposed to being able to access them directly from the map like in our favourite compulsive don’t-know-why-I’m-still-playing-this game Hunting Simulator 2. Maybe we’ll have another go with a brand new save, but as things stand, we can’t get out of this position. It’s a frustrating way to leave it, but leave it we must. 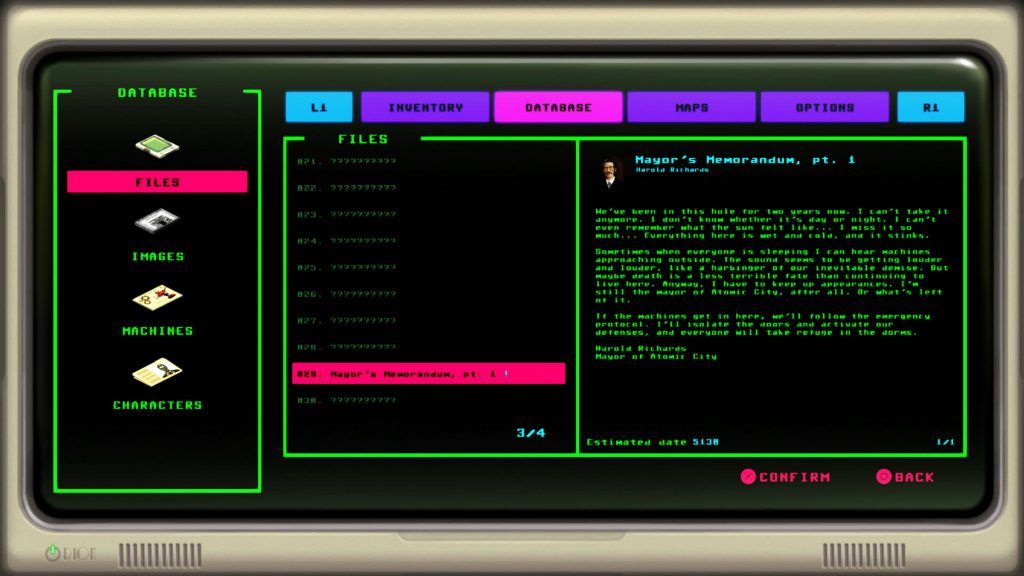 It’s a real shame as RetroMachina is a great game with many hours of gameplay if you’re as thorough as we are. It’s beautifully illustrated and your progress is appreciable once you get the hang of interpreting the map anyway. It’s still a solid game, but the problem we addressed is a significant factor. A slight tweak to the fast travel mechanic would resolve it in one fell swoop, though we fear the inactive enemy spawners that halted our progress are more of an issue than fast travel.

In conclusion, RetroMachina is a solid action puzzle game with vividly realised enemy designs, a great mind-control mechanic and beautiful art. Just look at it. It’s only the technical issues and occasional glitches that stop us giving it a better mark. Sure, it’s not the paciest of games, but nor does it need to be.

Update: A patch was deployed on 20/05/2021 that resolved the issues we had. Thanks to the dev and publisher.

Cons
- So much backtracking and retreading of old ground
- Occasionally glitchy in terms of AI behaviour
- UI text of story logs is a bit on the small side
- Fast travel implementation makes for no recovery from being stuck in blind alleys as we are
Summary
RetroMachina is a solid action puzzle game with vividly realised enemy designs, a great mind-control mechanic and beautiful art. A technical issue halted our playthrough prematurely, we just hope a patch resolves it. (p.s. it did)