It’s not very often I sit down to write a review and have to really consider the value proposition on offer. I’m no stranger to dealing with shorter experiences but I tend to see most of them as appropriately priced. With all this in mind, Gutwhale arrives from Stuffed Wombat and is a short but not especially sweet experience. 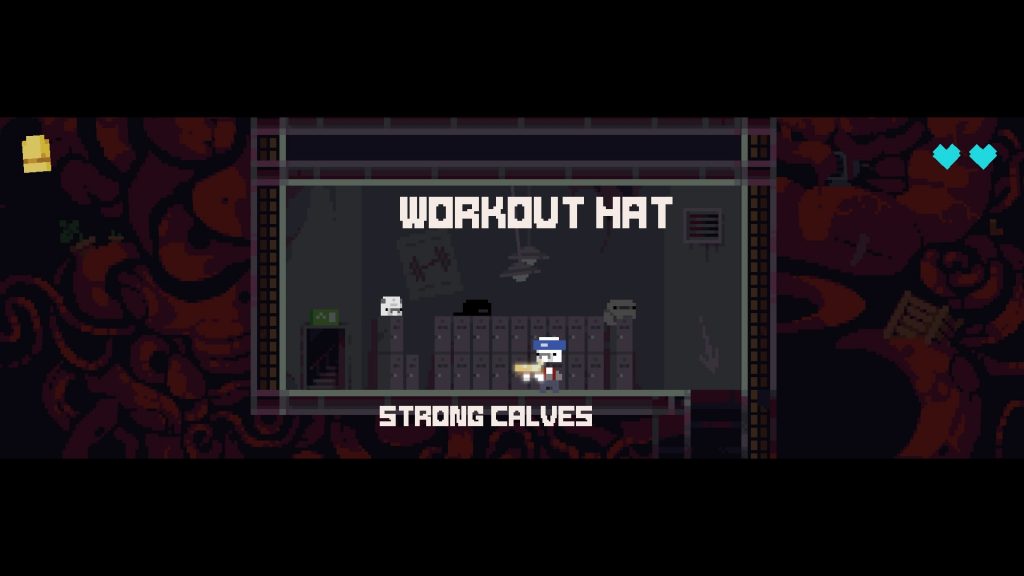 Gutwhale is a roguelike in the truest sense. You control a gunner who is tasked with descending through the belly of a whale. During these brief three levels, you’ll shoot jellyfish, skulls and frogs. There’s no permanent upgrades to speak of and enemy encounters are randomised. One neat trick Gutwhale employs is giving you one bullet to shoot. After shooting, you must retrieve it to reload. It delivers some much needed risk and it pays to be close at hand when firing on foes.

Capturing your bullets does help build your multiplier and the points you gain can be cashed in for items between levels. Your movement is pretty standard with you able to walk left and right and also having the ability to jump. Jumping also allows you to shoot downwards. It’s a quick way to eliminate some enemies but, with some of them employing projectile attacks, that comes with some risk. 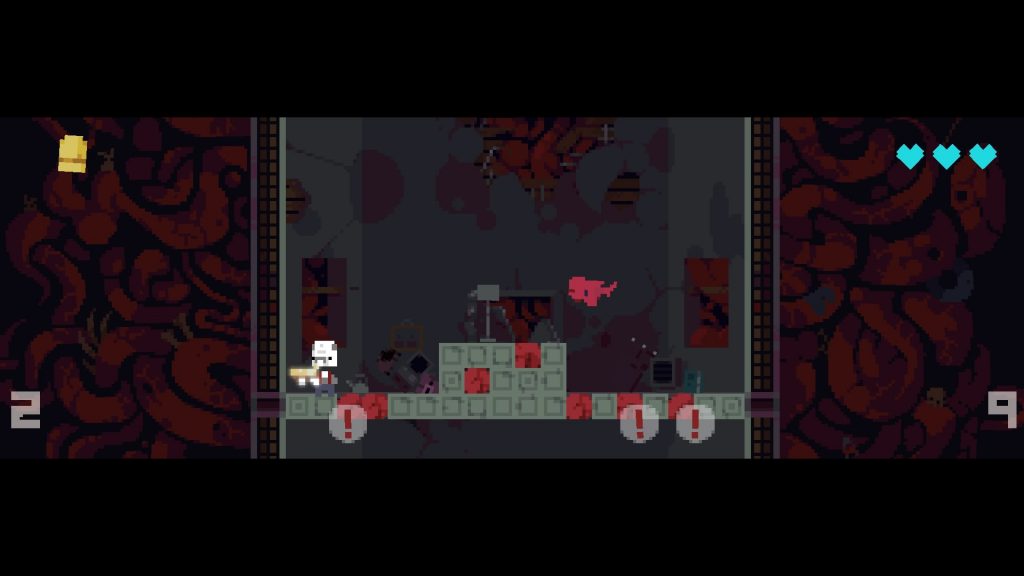 One thing I quite enjoy is the simple, pixelated look of the action. The comically sized bullet is charming and hits can feel satisfying. Your gunslinger looks fairly bland but you can customise him with one of the hats available in the lobby. The ugly hat offers you the most resilience. There’s one that gives you a higher jump and another that punishes you with a one-hit kill in exchange for more points. These hats effectively act as a modifier but other hats can be bought at the shop. Typically, these are the most expensive item so it pays to build up your multiplier as much as possible.

Enemies do look fairly plain but the underwater location does allow them to deal in fish shoals and frogs. Each run ends with a Monty Python-esque flattening by a camper bus. Everything moves well and the runs do carry a good sense of momentum. The soundtrack fits, with a metronomic, pounding song feeling like the countdown of a clock. The way the floor drops out as you clear a room looks nice and enemy placements are telegraphed before you start to fall. It gives you time to anticipate the next challenge and gives a much needed moment of control. 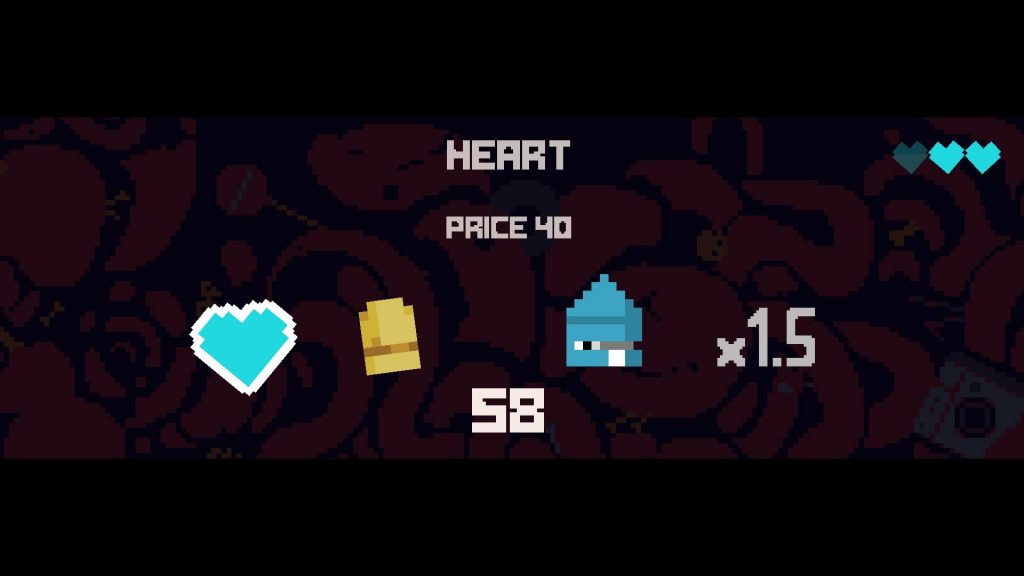 It’s a very simple game that, at times, delivers a swift loop with intriguing ideas. Unfortunately, Gutwhale’s biggest problem lies with just how tiny it is. Each level takes a few floors and there’s only three levels in total. A successful run takes minutes and beyond that, there’s a handful of objectives to complete in order to unlock an extra ending. You could conceivably be done with this game inside half an hour.

There is challenge here. With the each level comes a sterner set of enemies with predictable behaviour. Some of the encounters can really put you in a tight spot and the short nature of the game means you’re not far from your next restart. Ordinarily, a quick loop for a roguelike wouldn’t bother me but there’s very little reason to keep playing. Shop offerings feel almost static. There’s always an option to buy a bullet, a heart, a hat and a multiplier. Prices increase as you delve deeper into the run but the short nature of the game means you’ll see everything very quickly.

It’s such a shame this game feels so slight. With more hats, more levels and enemies, you could’ve had a more substantial offering. As it is, there’s very few surprises in Gutwhale. The loop is too short to really sink my teeth into and there’s so little on the periphery to really change the proceedings up. 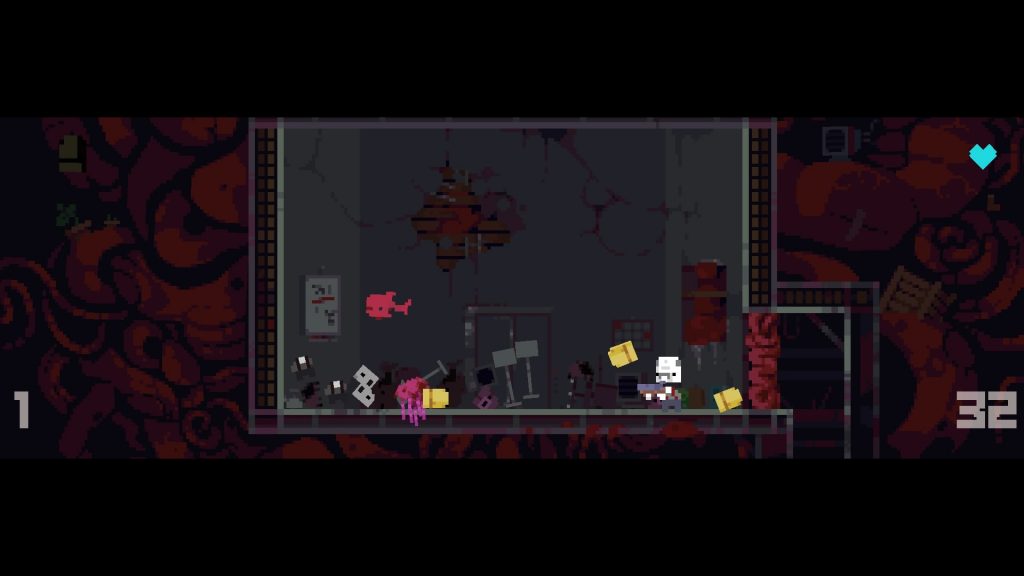 I could potentially see the appeal from speedrunners. There’s enough in the way of random elements to keep thing relatively fresh but I found myself fairly bored by it all. The quick turnaround heightens the repetition and, at times, it can feel somewhat futile. For £4, I want something more to play with. There’s nothing in the way of post-game content and, honestly, I’m running out things to talk about.

There is a delightful nugget at the heart of Gutwhale that’s unfortunately surrounded by a very slight, skeletal frame. With a successful run lasting a couple of minutes, there’s a need to find joy in repetition. I didn’t really find much to shout about. There’s too few hats, levels and enemies for me to really dig into something so small. There’s nuance to the controls and a definite need for quick, skilful reactions but it doesn’t click for me.

Gutwhale
4 Overall
Pros
+ A very encouraging premise.
+ Tightly controlled.
+ Quick restarts.
+ A very breakneck pace.
Cons
- A game that's over by the time you get your teeth into it.
- Very little post-game content.
- Very, very slight on content.
- Repetitive and I'm not very compelled to try run after run.
Summary
Gutwhale feels like a game in concept.  With some responsive controls, there is an enjoyable loop on display that quickly ran out of steam, for me.  Content is all too slight and, whilst it's a game that feels best suited when you have a couple of minutes to spare, I'd seen it all in ten minutes more.  If it was expanded upon with more levels, hats and enemies, I would have been more inclined to recommend it.  As it is, by the time I got into Gutwhale, it was already over.