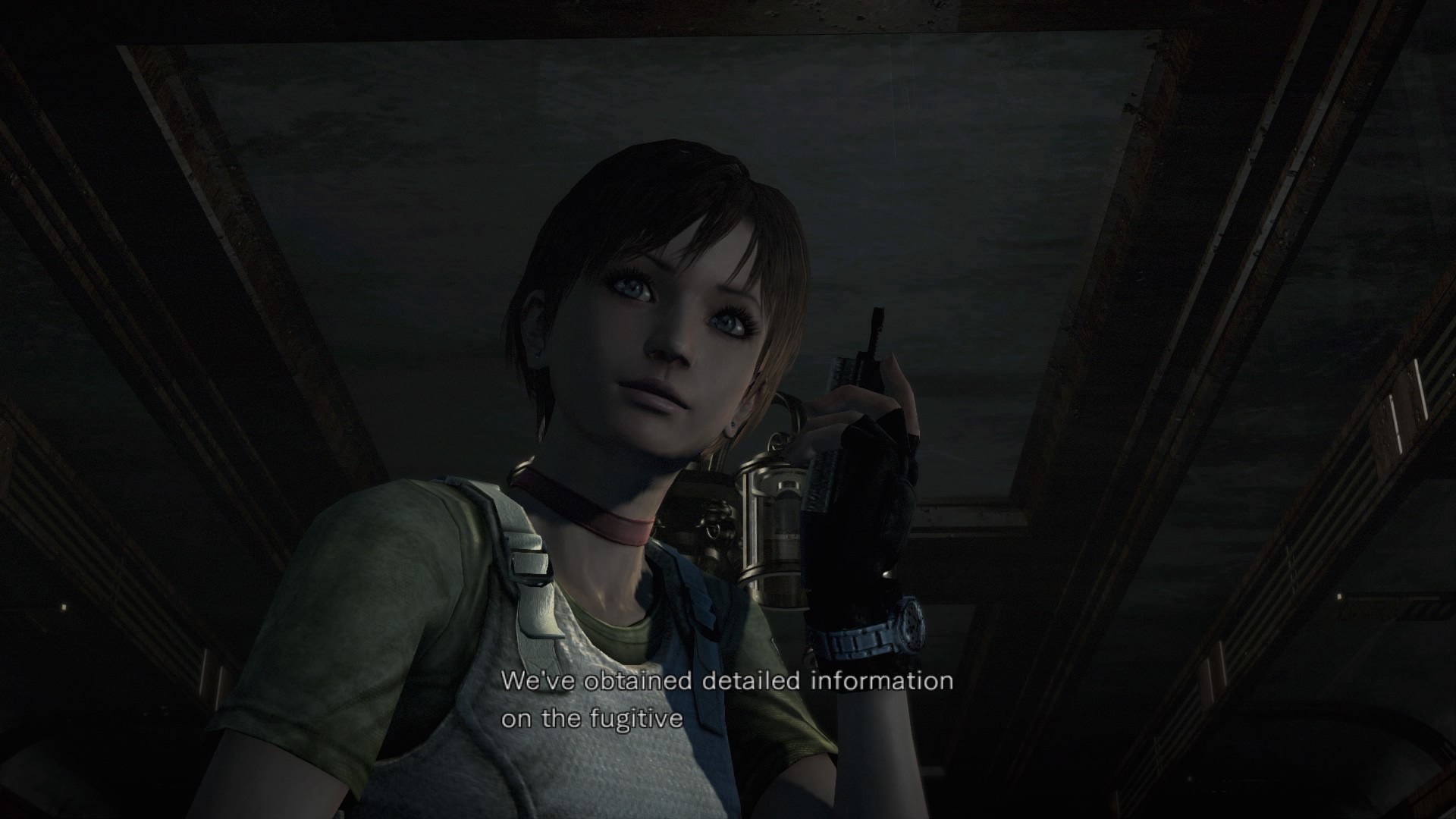 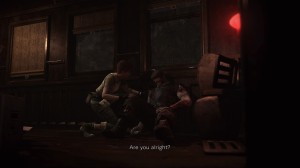 Resident Evil 0 was probably the last Resident Evil in the ‘classic’ style that I played. Released on the GameCube after the excellent Resident Evil Remaster convinced me to get the system it promised more of the beautiful prerendered backgrounds but with some ideas of its own. Originally intended for the Nintendo 64 it was finally released to mostly positive reviews in 2002 so does it stand up over a decade later?

As the name implies Resident Evil 0 takes place before the original game. You play as Rebecca Chambers on her own adventure (she helped Chris Redfield through the original) as her and the rest of S.T.A.R.S Bravo team arrive on the scene early. After a rough landing they discover a convict has escaped the custody of a nearby van. Rebecca encounters him on a stationary train but her and her team also encounter zombies and “monsters” so she has no choice but to team up with the convict, Billy Coen, in order to survive.

This set up creates an interesting gameplay mechanic. Although Resident Evil and Resident Evil 2 both feature two characters they were the basis of two separate playthroughs where as here both characters are together throughout the game, only separating briefly every now and then. So there is more scope for puzzles requiring two people, you can work together to defeat stronger enemies and you can carry around twice as much.

You can choose to control Rebecca or Billy and can switch on the fly at any time. Rebecca, as a medic, can mix herbs (red herb + green herb = full health remember!) and also has a chemical set which comes into play for some puzzles. Billy on the other hand has more health, is a better aim so can take down enemies faster and can push heavy objects. You can choose to run around together or split up leaving your AI partner in (hopefully) a safe place. When together you can tell your partner to attack enemies or not to save ammo and you can physically control them with the right stick but in general they’ll just be following you around.

Other than that the gameplay is, as mentioned in the first paragraph, classic Resident Evil. Fixed camera angles, loading doors, inventory management, zombies, they’re all here. For the uninitiated before Resident Evil 4 these games were adventure horror games. You had to explore an area to find items, which would be useful in another part of the area, but you might need a key to get to that other area so you’d have to explore elsewhere, all whilst being harassed by zombies or dogs or whatever. You couldn’t just kill everything either as ammunition for your weapons was always on the thin side so avoiding monsters was preferable if possible. Yes, the horror relied on jump scares but you were also always on edge as you were so fragile and saving was restricted.

Sticking so closely to the original formula is both a blessing and a curse to modern eyes. Thanks to the static camera angles the graphics are excellent. You could probably achieve much the same on modern machines with fully 3D graphics but let’s not take that away from this game (weirdly the in game graphics now surpass the FMVs which appear blurry). Examining objects and documents to find clues is still fun as well, even if a lot of the puzzles boil down to put this object in this hole. 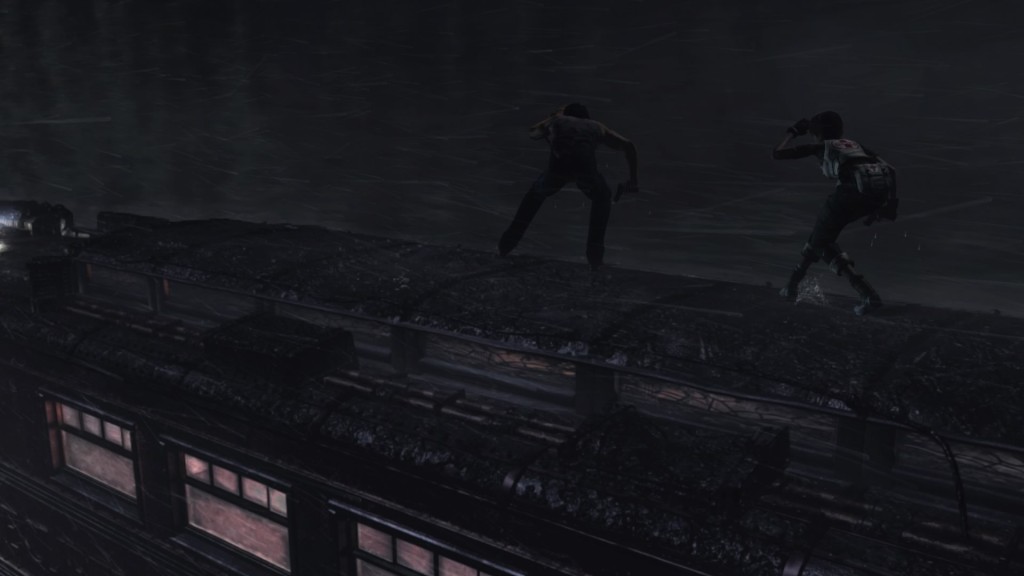 Enemy design is pretty weak and managing two people’s inventory is more of a chore than the usual one. Although the idea of removing storage chests and just allowing the player to put items down anywhere seems like a godsend it actually equates to more backtracking as you put an item you need on the floor in a random room rather than in a chest which magically connects to all other chests in the game.

Unfortunately the controls aren’t up to modern standards (this coming from someone who never had a problem with them back in the day). There are two options, the original which has you pressing forward to move your character in the direction they’re facing regardless of where the camera is pointing. With this ‘tank control’ scheme you rotate on the spot when pressing left or right and your turning circle when running isn’t great making nimble movements impossible. The other control scheme moves the character in whichever direction you press in relation to the camera which makes you far more nimble (you default to run speed in this mode too) but can come unstuck when the camera angle switches and suddenly you’re no longer pressing in the direction you intend to go. For the modern gamer the latter is definitely the way to go but I did get punished in some close quarters boss battles so neither is perfect unfortunately.

You’re probably looking at six to eight hours for your first playthrough if it’s your first time and the game offers a few different difficulty settings, unlocks for getting better finishing grades and there are a couple of modes. Leech Hunter was in the original game and has you running through areas from the game killing enemies and collecting Leeches to improve your score which again grants unlocks that you can take into the main game. New to the HD version is a mode where you get to play through the normal game with Billy replaced with Albert Wesker, Resi‘s most famous villain. The majority is no different (cutscenes still feature Billy for example) but Wesker has his super powers from later games so he can damage enemies with a glance and run at super speed. It’s just a bit of fun if you want to play through the game again with an overpowered character. 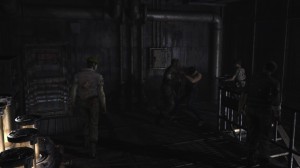 Obviously Resident Evil 4 changed everything and so in recent times this type of Resi has been hard to come by. A year ago the HD version of Remaster was released (I’m actually playing 0 on a disc bundled with HD Remaster, but you just choose either game from a menu, you get nothing special) to remind everyone how enjoyable these games were. Resident Evil 0 is not quite up to that standard but it’s still a solid game in the old mould. If you have already played Resident Evil Remaster and you want more then this’ll tide you over, otherwise play that one first to see where the series actually started. I mean it’s a remake of where it actually started, but you know.

Resident Evil 0
8 Overall
Pros
+ Character switching is still a novel idea + Looks great + Plenty to unlock if you don't mind playing the core game again
Cons
- Neither control scheme is ideal - Two times the item management - FMVs are blurry
Summary
Although not up to the standard of the Resident Evil remake, Resident Evil 0 is a solid entry in a dead genre. Visually it's stunning and there's plenty of content if you're willing to play the game multiple times. Most of the changes to the core gameplay aren't for the better but the main gimmick of controlling two characters is still a novel one.