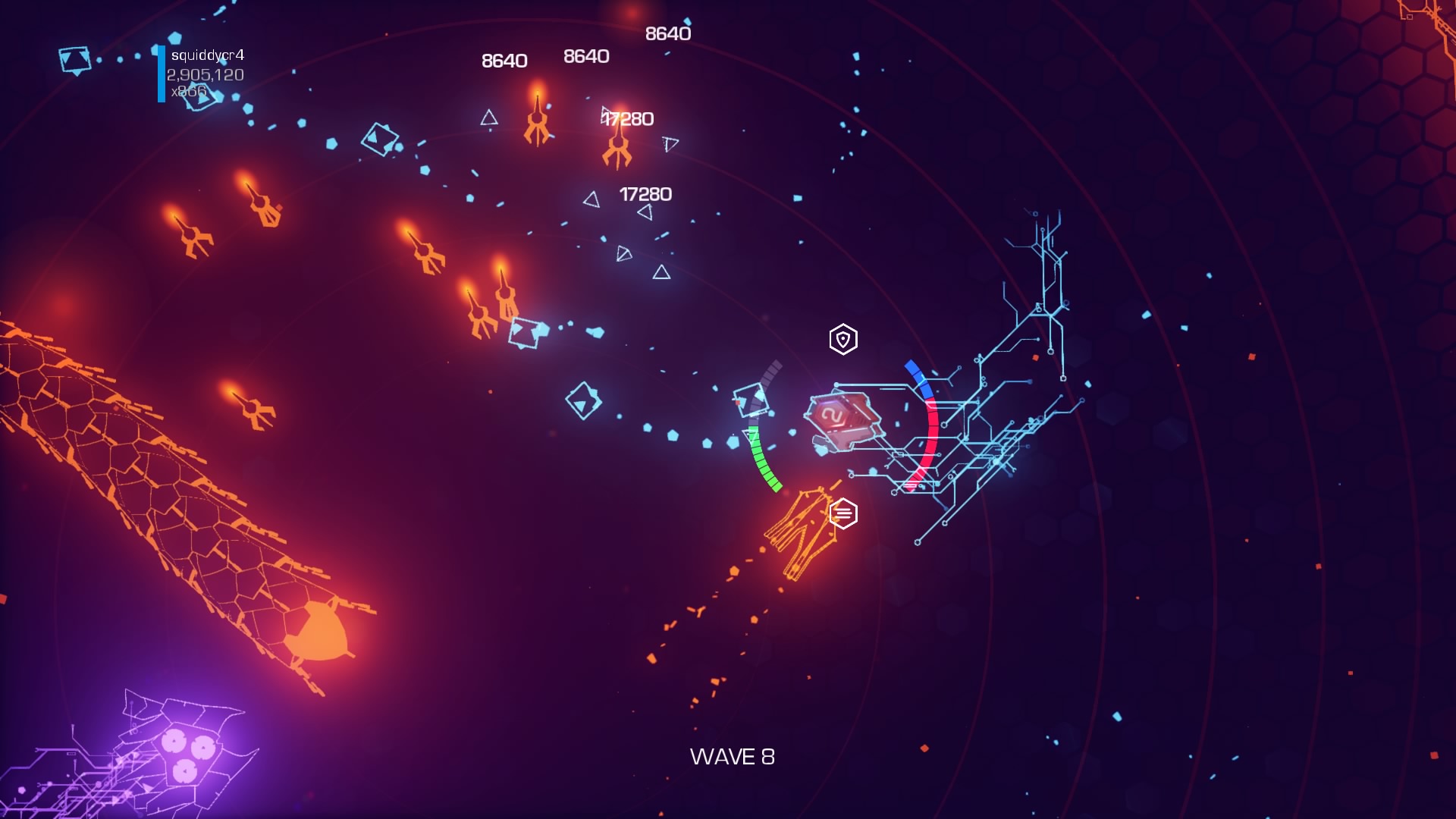 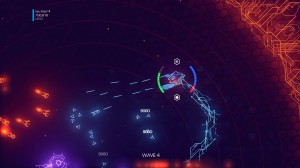 AIPD is the latest entry into the crowded twin-stick shooter genre on PSN.  The name, standing for Artificial Intelligence Police Department, alludes to some sort of plotline but the game doesn’t touch on that at all and instead just throws you in a the deep end.  Usually this wouldn’t be a factor, I mean how deep can a twin-stick shooter really get, but AIPD does throw in some interesting ideas.

Taking its cues from Geometry Wars, this is a neon-coloured assault against crowds of coloured shapes.  When you shoot an enemy, it drops a little shard that increases your multiplier.  Your points also add towards permanently unlocking various weapons and chassis types for use in further games.  There are six weapons and chassis types.  As you’d expect, most of these will be the sort of thing you use once and forget forever but we rather liked the short range laser (that made the game feel like a more satisfying take on You Are Doomed) and the auto-targeting phaser weapon.  The chassis types simple have you picking comprises in your speed, endurance and heating systems rather than acting like rewards.

The heating mechanic is interesting, if annoying.  While you aim with the right stick, you have to manually fire with the R2 button.  If you don’t let up now and again, you’ll overheat and will drop a heat bomb that can damage you if you don’t get away.  A trophy exists for not overheating across the entirity of the game’s fifteen stages but it is very easy to overdo it in the heat of battle and as a game mechanic, it irritates rather than enhances.  It does add an additional layer of complexity.  Whether or not the game needs it is up for debate though. 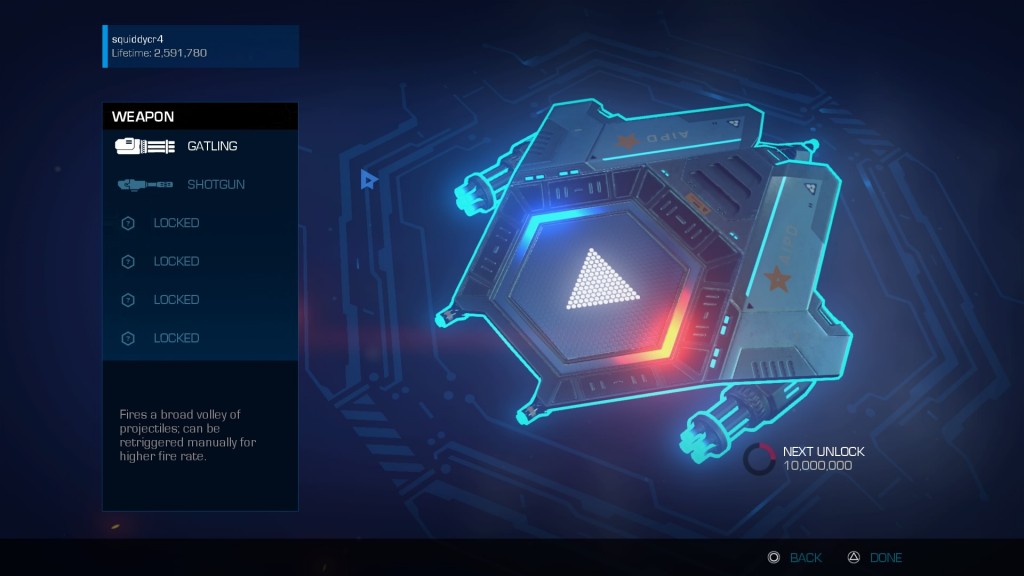 Aside from your primary weapons, you also occasionally unlock random special attacks.  These can be bombs, torpedos or even a multiplier booster.   You also have a range of power-ups that give you shields, slow down the action or improve your gun cooling.  These are identified by icons that appear above and below your ship, so you’ll be returning to the help screen now and again to figure out what everything does.

At it’s best, AIPD is a nice take on the Geometry Wars formula.  The weapon types add variation and visually the game is very solid (although even I’m starting to get a bit bored of this look now).  The bright visuals and techno soundtrack are exactly what you’d expect from a modern twin-sticker but it is better presented than many other examples.  The action is satisfying and it is initially quite interesting trying to unlock the various upgrades. 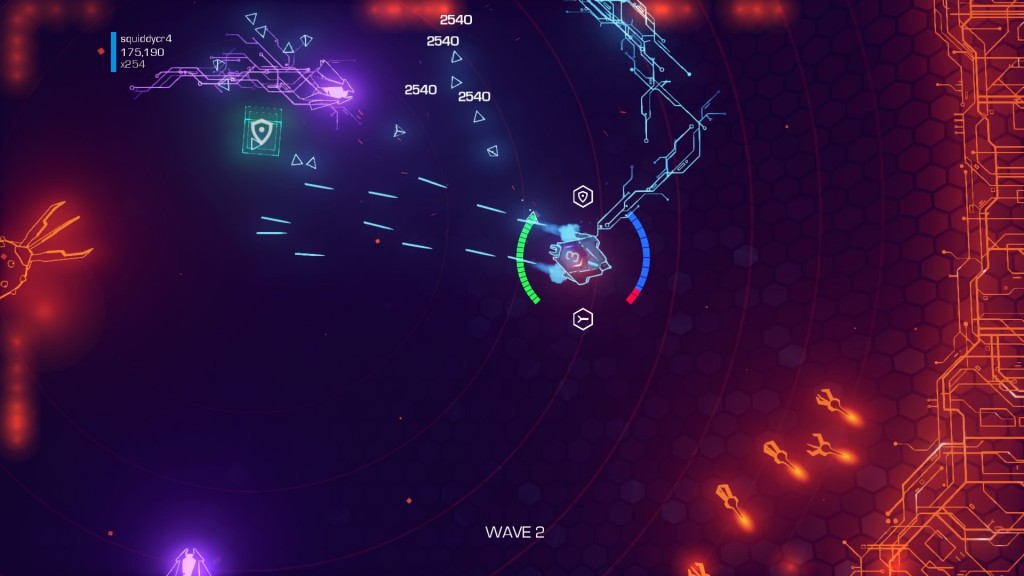 However, Blazing Badger have chosen to focus on a very sketchy selling point.  They claim that the game has millions of modes but in fact what it has is the one basic mode and then variations on that that revolve around the various power-downs that you can choose when you play.  These options range from faster enemies, suicide bullets, shielded enemies, EMPs that put out your weapon systems and so on.  Quite why you’d want to pick any of these I don’t know, except for the fact that they do increase your initial multiplier.  So if you’re chasing leaderboard glory, you have options.  However, this is hardly Geometry Wars 3 and those leaderboards aren’t going to be packed with competition. 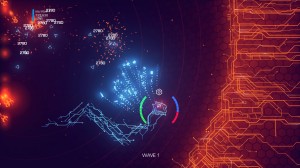 As you play through the game’s fifteen stages, you have to make choices between these power-downs after each stage anyway.  And whether you have none of them selected or all 24, the game is much the same.  Only the difficulty really changes.  You’ll still be in that same arena with the same enemies.  As such, once you’ve beaten the end of game boss, that’s it.  You’ve seen it all.  Lifespan here is very much an issue, contrary to the game’s apparent main selling point.

These constant downgrades are at odds with what a good shoot ’em up is really about.  You want to feel the progress as you go along but instead of you levelling up, only the enemies do.  Having to pick between upgrades for them (for a measly amount of multiplier bonus) kind of stings and given that these choices are random, it kind of makes the leaderboards an uneven playing field.  As such the game’s most unique feature ends up being the one that kind of spoils it a bit.

The weapon systems do honestly give the game a different feel though.  The standard machine gun plays very differently to the laser or the shotgun.  So there is some variation to be had there but overall AIPD won’t last you a long time unless you can get into some leaderboard action.  But genre-afficionados will have exhausted that on Geometry Wars 3 which, as ever, remains the king of the genre by a long, long way.

AIPD
6 Overall
Pros
+ Genuinely satisfying and fun to play + Good choice of primary weapons
Cons
- Constant downgrades take the fun out of it - Lacks variation - Is all a bit too short
Summary
AIPD is a solid shooter marred by some unsatisfactory design decisions. Games are supposed to reward your progress. This doesn't.