In this job you see games of all sizes and origins. As well as the big hitters, you get smaller efforts that have sometimes seen a prior Steam or mobile release. Some even find their way on to web browsers before an eventual console release. Random Heroes: Gold Edition is one of these such instances. Coming from Woblyware and with contributions from Somepx, this is a compilation of the previous Random Heroes efforts. With 9 acts, dozens of guns and characters to work towards, this looks to tie everything together for a fiver. 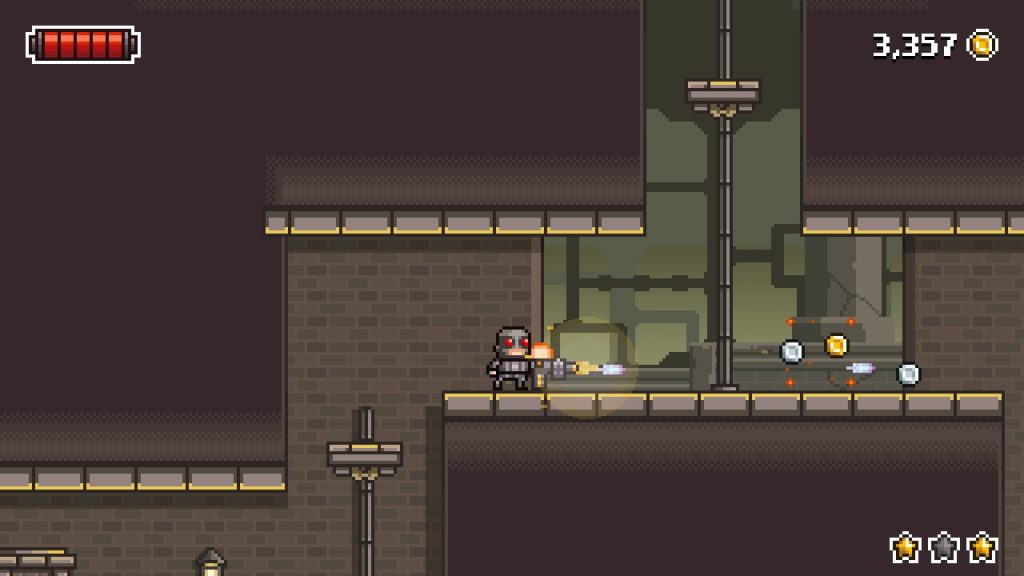 A sidescrolling, platforming shooter, Random Heroes: Gold Edition‘s story is fairly light. You’re tasked with shooting a zombie hoard and ask questions later. The introductory cutscene is all the narrative you’ll be given as you venture out and shoot everything that moves. It’s simple, to the point and lets you get on with battle.

Random Heroes: Gold Edition controls well. It’s a simple platformer to grasp and you have a jump for traversal. This jump is responsive with some generous air control. You can be precise with it which allows you to concentrate more on defeating enemies. The shooting also feels good although the default pistol lacks power. Some enemies can be real damage sponges but their patrols are fairly rigid. They’re predictable and sometimes the platform and enemy composition can lead to some tricky challenges.

Some enemies fire back, some charge at you and some explode on contact so you have to be mindful of what you’re facing. There’s a strong variety to them and they’re introduced gradually. Each stage comes with a set of hazards to avoid from spikes to dripping ceilings and it comes together to bring forth a nice sense of difficulty. 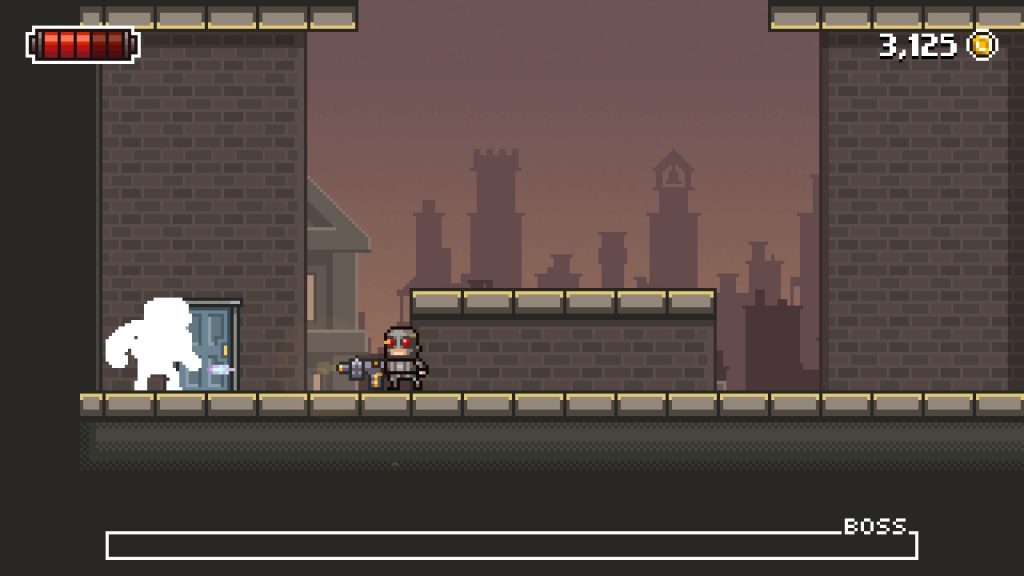 Unfortunately, the stage design does begin to feel rather bland. The first few areas look far too similar and my enthusiasm was already beginning to wane before the later stages start to bring some more colour to the palette. Coupled with the early grind for weaponry, it can slow progression initially. Things take a better turn once you’re out of the sewers. The level topography doesn’t devolve much from the chunky, step-like design but the new enemy types and changes in background do give you something different to look at.

In terms of progression, levels are filled with coins to collect and you can earn three stars for completion and performance within the levels. The stars unlock new heroes which are rated in speed, damage and health. There’s dozens to unlock with different skins and some of them can become really effective. Money can be used to purchase new weaponry which can make short work of enemies. There’s plenty to choose from and they’re rated in speed and power. Random Heroes is a fairly slim package but it does offer choice in terms of heroes and weapons. 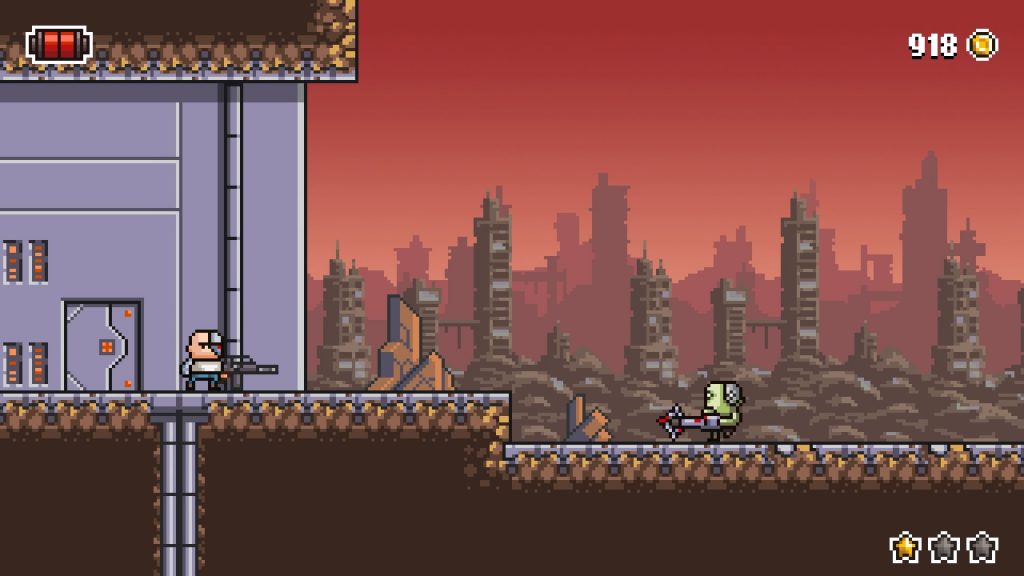 Each area ends with a boss fight. Like the regular enemies, they have predictable patterns that you have to figure out. These encounters are where most of my weapon experimentation gets explored. They’re not especially challenging but reward you with plenty of money. You can replay any level and it’s fun to return to the previous areas and tear through them with new weaponry and characters. Levels can be explored for secret coin stashes and diamonds that add to your maximum health. Unfortunately, I’ve only found one of them but the new characters are robust enough to take extra hits.

Visually, the characters and levels all carry on this fairly standard pixel-art style. They’re detailed but not especially different or unique in design. With the number of enemies, heroes and weapons, there’s definitely plenty to see and fiddle with. As I said earlier, the first trio of areas can feel drab and it doesn’t help when the same music covers them all. It does not make a good first impression. Music and look does freshen up and the composition of enemies and traps does lead towards a challenge. It just takes a while to get out of first gear. 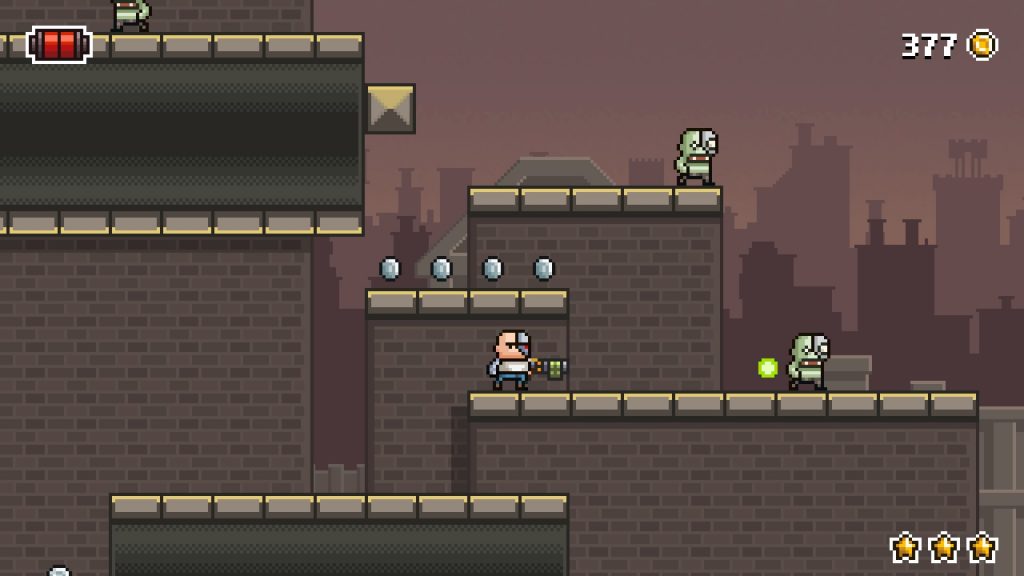 The heroes all have a unique look but they all function mostly the same. They don’t come with differing abilities beyond the changes in damage and speed. They don’t tend to overlap too much which is surprising. The sheer number of them can make you feel they’re more a cosmetic change other than one for gameplay’s sake. You can find a favourite quickly and stick with them and the more impressive characters don’t take a lot of effort to unlock. The same can be said for the weaponry with the middle of the pack being more than enough to beat the nine stages.

It’s a slow starter but Random Heroes: Gold Edition does offer some enjoyment with some tight controls and tricky enemy placement. It’s a slim package but the characters and weaponry give you something to work towards and the dozens of levels can be swiftly traversed and explored for extra loot. It does start to settle into something fairly mild and brainless and I do wonder about longevity.

Review 0
6 Overall
Pros
+ Mindless fun.
+ Reliable controls with a forgiving jump.
+ Plenty of characters and guns to work towards.
+ Plenty of enemy types to keep you on your toes.
Cons
- Visually, it takes a while to get interesting.
- Bosses don't offer much challenge.
- Level design and gameplay can start to feel repetitive.
- A slim, short-lived experience.
Summary
As cheap and cheerful as it is, Random Heroes: Gold Edition can feel a little slight and mindless at times. The level design takes a while to change up and, whilst enemies and weaponry can vary, you can settle on a favourite hero pretty quickly. Money gives you reasons to explore each nook but there does come a point where it doesn't matter so much. The pixel art is detailed but the geography of each level becomes familiar and a little stale as you move on. I did have fun but it felt fairly short-lived.