Games of all shapes and sizes come to me in this job. Radio Squid comes from PixelTeriyaki and looks to deliver an experimental look at the twin-stick shooter. Whilst somewhat small in scope, there’s some interesting choices here that at least make the game plough its own furrow. The plot is a simple affair. You play as a cursed squid who needs to traverse six areas to break it. The game keeps exposition very light and, after learning the ropes, you’re off on your adventure. 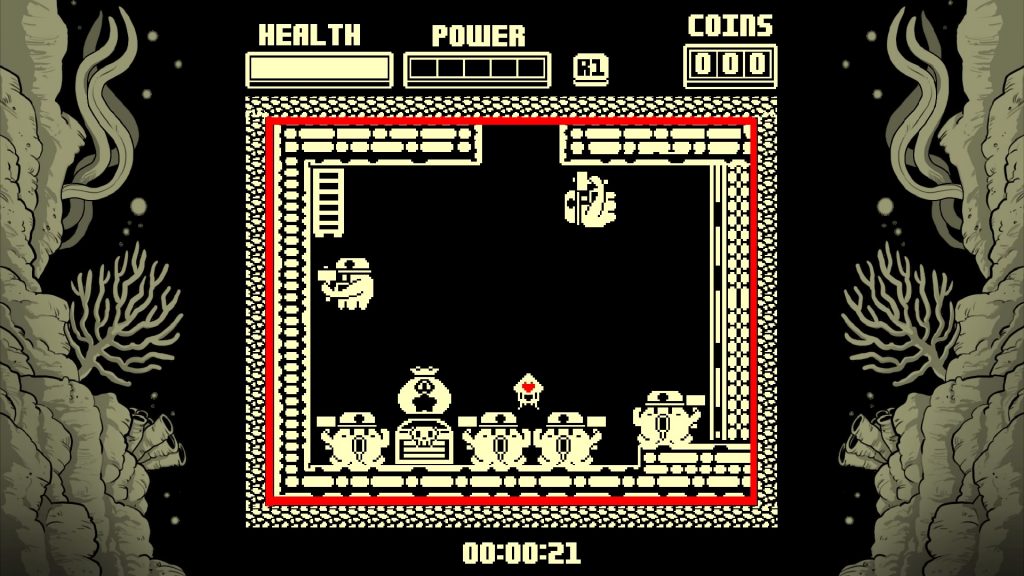 Gameplay offers a twist on the traditional twin-stick shooter. Whilst movement is covered by the left stick, the right stick is used to pick a direction to shoot in. Shooting is done automatically but you can’t shoot until you find the musical note on the screen. In addition to this, your projectiles can deal damage to yourself so the rhythm of combat is one of juking and jiving. Unfortunately, the levels are designed in a claustrophobic manner.

The screen effectively locks you into the encounters so I found myself trying to assess what enemies needed what tactics to be dealt with. It becomes strangely strategic although the friendly fire means I’m expecting to take damage from myself. Not that death is a huge problem in Radio Squid. You can buy your way back into a fight with coins. These respawns usually cost a percentage of your wallet and then ten coins for every subsequent spawn. The initial death ultimately feels costly but coins become plentiful. This is aided by your bomb power which turns any on-screen projectiles into coins. 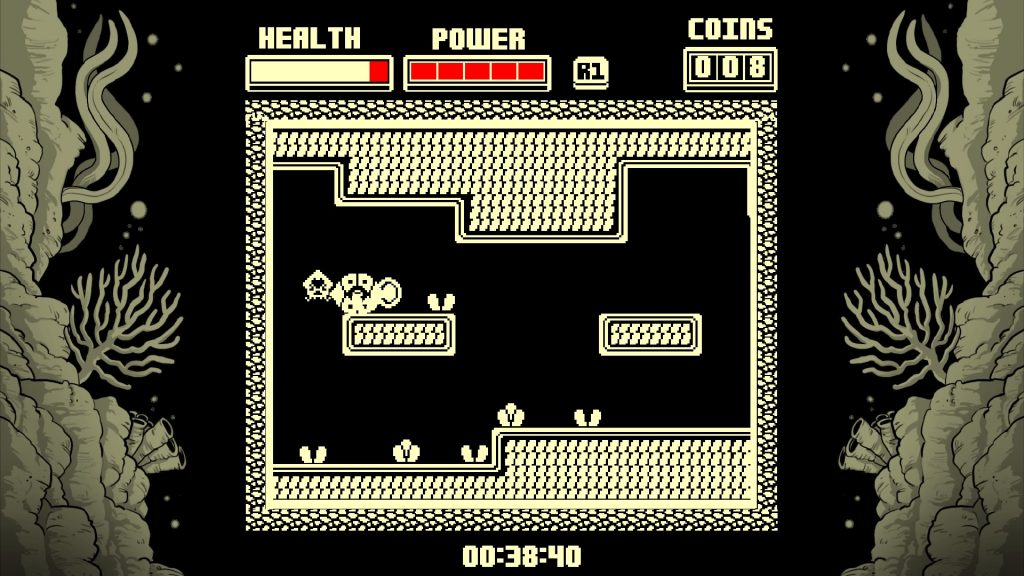 The friendly fire turns combat into a frustrating exercise in outlasting the opposition, at least until you’ve got a handle on encounters. To the game’s credit, each room is set so practice will make perfect. It’s not an especially long game with each of the game’s six floors taking roughly ten minutes. With a game that short, the frustration might be worth bearing just to see the bosses.

Radio Squid‘s monochromatic look is a charmer. Enemies and locales keep with the underwater theme although you will not find much variation. New foes are introduced in each new zone but they don’t tend to operate in ways that would surprise you. You can guess a puffer fish will explode on death and a shellfish will reflect bullets until their shelf is shed. Bosses offer more variety. These larger beasts offer more mobility but their size allows for plenty of target practice. These still feel like wars of attrition but they do cap an area off nicely. They explode in a satisfying light show and, even if you’re short on cash for shop items, a money toad during each intermission will save your game and top your wallet up.  To be honest, it evokes a lost Amstrad CPC or Spectrum game.  The simple colour palette and huge sprites remind me of the green CPC monitor.  Nostalgic, if not entirely faithful. 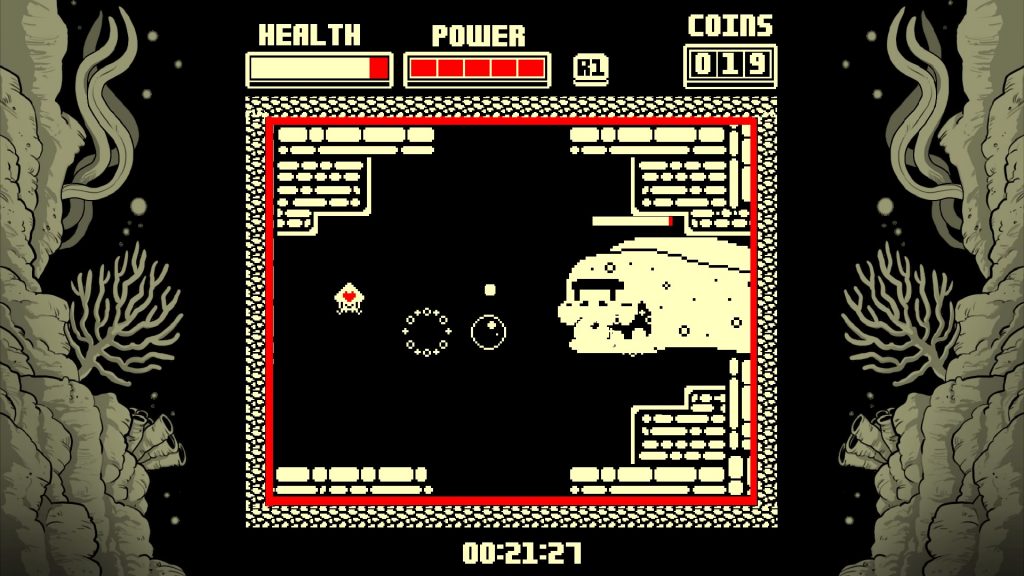 There’s a few intriguing ideas on show that don’t all pay off. Friendly fire should keep players aware but it’s clear the environments are up to the task of frantic shooting. Enemies and the player sprite are too chunky and the walls too blocky to enable swift, avoiding action. On the other hand, PixelTeriyaki have saw fit to give you a decent health pool and plenty of coins to keep you fighting. The experimenting has at least produced some interesting results, even if the longevity is lacking.

Your gameplay is timed which makes me suspect they want people to return and tackle their personal best. Whilst it’s a fairly rigid experience with plenty opportunity to practice, I just don’t find it fun enough to persist in that manner. I feel like the latter stages lean more on escaping out the side of the screen to attack enemies from behind. It’s when combat felt the most cumbersome to me. Especially as your movement sometimes can’t match the speed of your enemies. 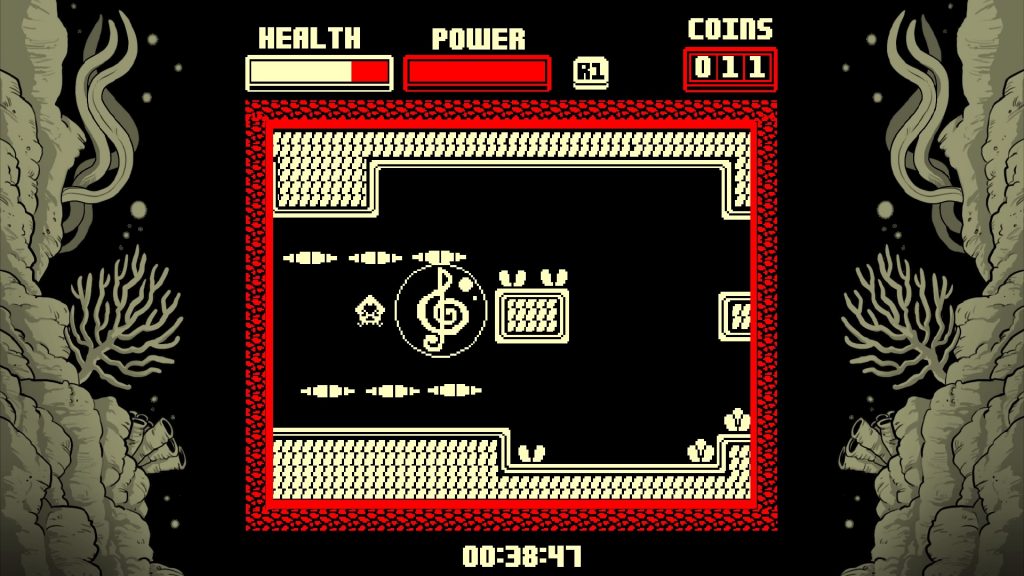 Sound effects are largely a predictable suite of beeps, although the musical score is outstanding. Each new area tweaks a new motif on to the existing main song. It’s catchy and nicely done. Boss fights up the tempo when they reach a new phase and, whilst the score is paltry, a lot is done with it. There’s a simple presentation to Radio Squid that is likeable.

I’ve warmed to Radio Squid after originally being turned off by the futility of friendly fire. Seeing every encounter as a puzzle to be solved makes it easier. As does focusing on cashflow to keep yourself in the fight. The level design doesn’t allow for nimble movement and, as a result, combat never really elevates from a clumsy experience. Bosses provide unique challenges but, once it’s over, I have little reason to go back.

Radio Squid
5 Overall
Pros
+ Has interesting mechanics that come together to deliver something unique.
+ Nostalgic aesthetics.
+ Bosses offer a challenge.
+ Always seems to be enough cash on hand to buy an extra life.
Cons
- Friendly fire leads to a lot of frustration.
- Levels are tight and don't allow for nimble movement.
- Enemy designs start to feel predictable and samey.
- Levels start to feel very bland quickly.
Summary
Radio Squid has some admirable ideas that are somewhat at odds with some claustrophobic level design. Friendly fire does frustrate but at least it's offset by plenty of money to allow for extra lives. If nothing else, you're kept in the fight, despite how clumsy it can feel. Unfortunately, I struggled to truly enjoy this, although the look and soundtrack is charming and nostalgic.