Continuing their recent, lengthy streak of retro-inspired shoot ’em ups, Eastasiasoft have released Octonaut which is a horizontally-scrolling shoot ’em up featuring the titutar Octonaut, a floating octopus who is tasked with saving the Earth from an alien invasion.

Set across eight stages, the game plays out in typical fashion with the screen scrolling from the right as enemies pop into the play area and either shoot at you or try to get in your way.  You respond by trying to shoot them (using the

button) but if things get hairy you can also ‘dodge’ (pressing

) which will drop you back into the background, allowing you to avoid bullets and obstacles for a couple of seconds. 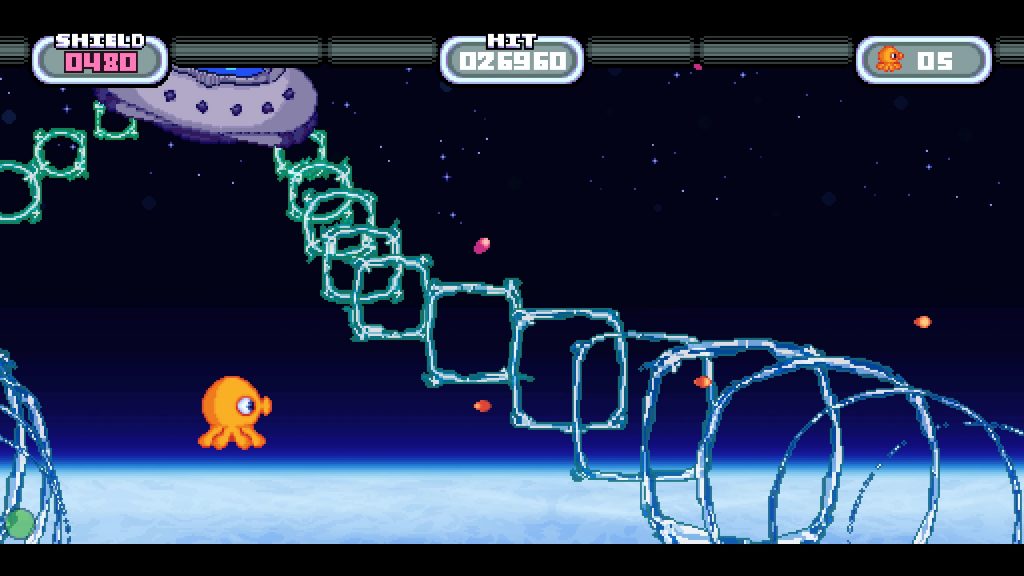 As you destroy enemies, they’ll drop one of three things.  Diamonds are just there for score.  There’s an additional mechanic where if you shoot a diamond its value goes up, but there aren’t many reasons to score chase in this game.  They also drop cakes which will refill your shield a little and they’ll drop weapons that are stored until you press

The weapons have some good variation but do suffer from that thing that so many old-school shoot ’em ups have in that none of them are particularly great but a few of them are more of a hindrance that anything.  If you somehow manage to lose all your shields, you’ll die and lose a life which will put you back to your basic weapon but sometimes this is preferable to some of the power up options you get. 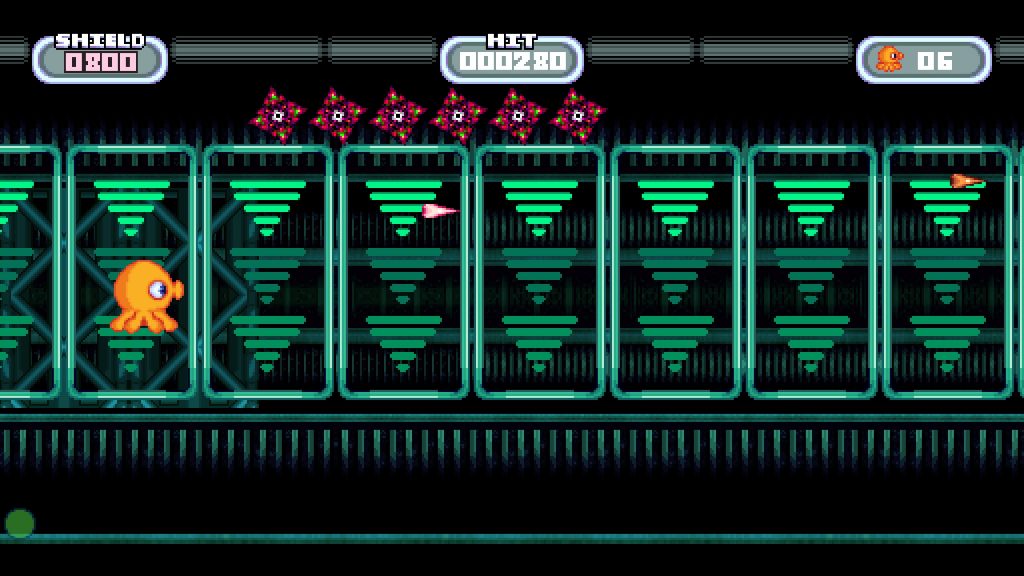 That shield then.  You start with 1000 and it goes down by 50 every time you are hit.  You’ll get hit a lot but you’ll be doing particularly badly if you get hit twenty times (not including the regenerated health from cakes).  There are some moments where a rogue bit of background might hit you (it doesn’t happen often but Octonaut‘s visuals can sometimes do a poor job of conveying the action) or boss battle might be initially a bit tricky but the shield is more than generous.  I finished the game with six or seven lives (you start on three), having beaten it on my first go.

This is despite Octonaut himself (herself?) having a very poorly defined hit box.  You’d assume that damage would affect either the whole sprite or just the eye but weirdly it’s neither.  Their head is vulnerable but their tentacles aren’t.  It speaks to a lack of precision. 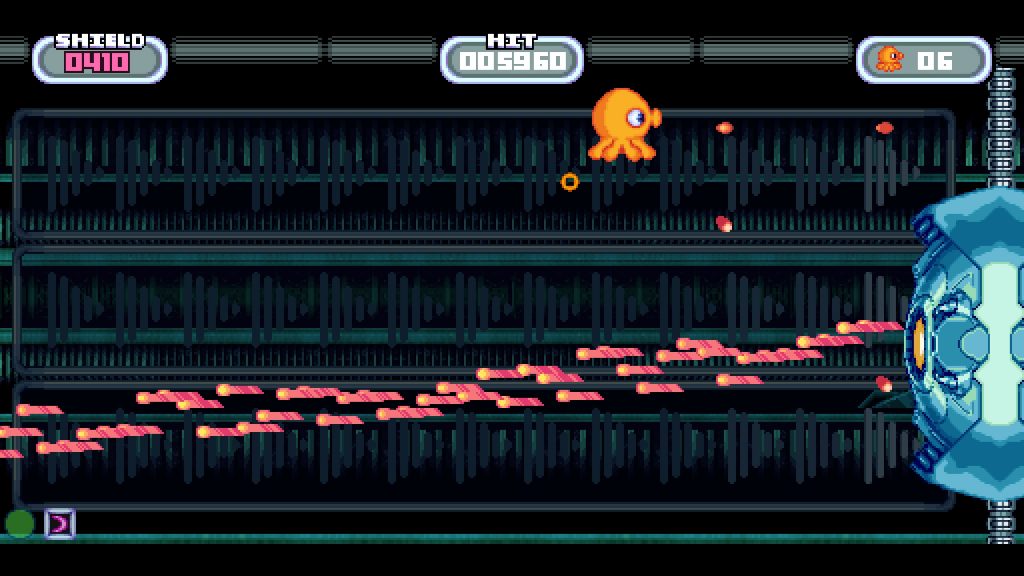 Each level of course has a boss battle and the majority of these are something of a formality with easy to read patterns.  The boss for level 7 did give us a bit of a challenge, mainly because it was quite unclear on what to do until we realised that you have to shoot the glass around his brain (something you can’t do for most of the battle and there’s no indication of damage when you can initially).  The game’s final boss was incredibly easy though which speaks to a lack of balancing.

The lack of challenge is a concern.  Eastasiasoft are currently grabbing their slice of that Ratalaika pie by offering up incredibly easy platinums and while this game is a little trickier than their others in that you have to at least complete three quarters of it, it’s still devoid of any real challenge which kills the longevity a little too.  The game does offer up a couple of additional modes upon beating it.  Panic mode makes the game more difficult by letting you take less damage while the Custom mode allows you to increase (or decrease) your lives, pick your starting weapon and choose what stage you want to begin from.  But you’ll have beaten the game by then, so going back isn’t really incentivised. 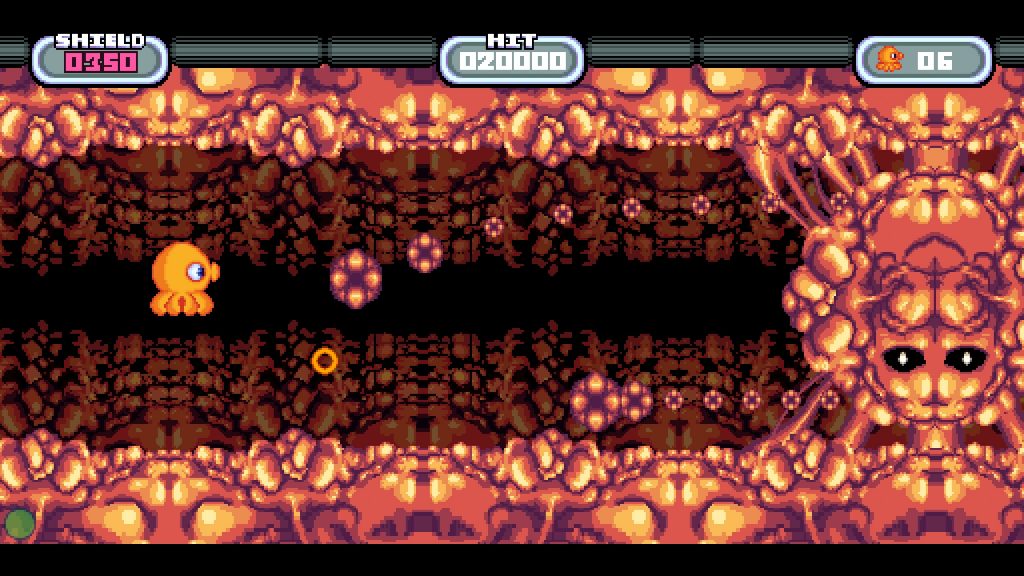 Visually the game opts for a bright but basic retro look, as you’d expect from basically every indie shoot ’em up these days.  To their credit, the designer does a good job of varying up the stages.  They all play much the same but you do see a progression from Earth to the aliens’ base.  One level puts in some areas that shove you around the screen a bit and that’s quite good so we’d have liked to have seen more of that.  It goes without saying that the game also has a chirpy chiptune playing in the background.

With all that said, the game clearly meets its objective which is to put out a cheap and cheery shoot ’em up with a one hour platinum and if that’s your bag, then you’ll have no complaints here.  But if you want a shoot ’em up with precision, invention, challenge and some (dare I say it) technical/visual wizardry, you’ll not be getting that here.

Octonaut
5 Overall
Pros
+ Playable
+ Some good variation in level aesthetics
+ Checking out the various weapons is interesting
Cons
- One and done gameplay
- No incentives for continued play
- Basic presentation
- Doesn't do anything particularly new
Summary
Octonaut does an okay job. It's a shoot 'em up with a bit of charm but not much in the way of innovation.