Preventive Strike is a vertically-scrolling shoot ’em up, from Moldovan one-man developer TocanaDev, which first landed on Steam three years ago but has just been brought to PSN by Polish porters SimFabric.

You play as an un-named helicopter pilot who has to get through four levels of surprisingly intense aerial warfare, starting off at your own border and working your way to the enemy’s base.  With just four stages, none of which last more than just a few minutes, that might sound easy but Preventive Strike is quite a strange shoot ’em up and one that changes your expectations as you play through it.

Before we get into that, here are the basics.  As expected you move with the left stick but you will need to use a few buttons along the way.

fires off a homing missile from a limited supply,

uses your shield (if you’ve got one available) and

will set off an ‘air strike’ which is basically a smart bomb.  These are all very finite but you can pick up extra stock from icons that show up in the air during the game. 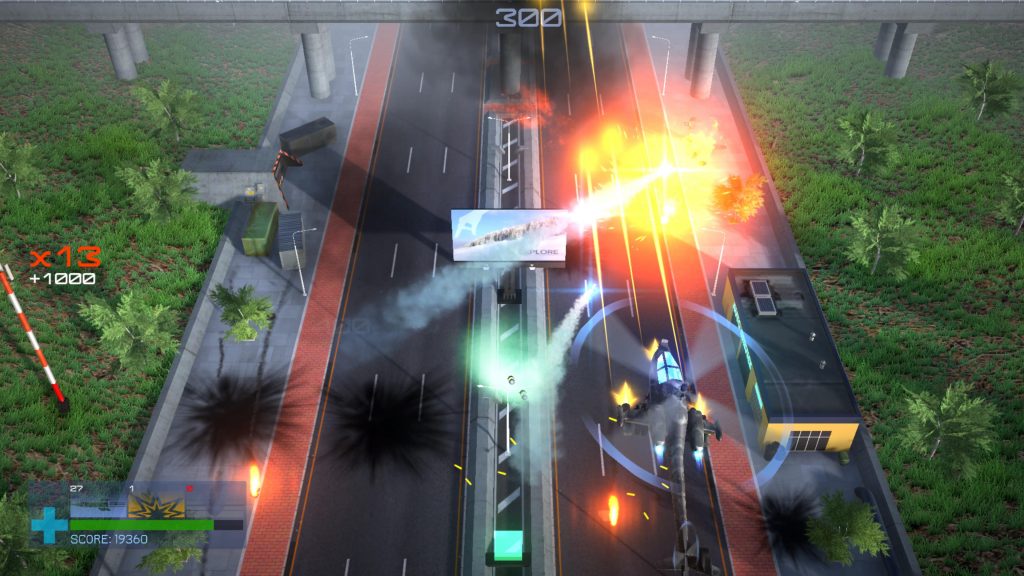 While the game is vertically-scrolling, it uses a 2.5D approach (a bit like Under Defeat) and this gives it quite an impressive look at first, especially when you factor in all the bullets and bright colours on the screen.  However, a few seconds into your first foray into the game and your chopper will be blown out of the sky without you having much of a say in it.  So you play again.  And again.  And again.  Just eating dirt every single time, questioning whether or not the game is even playable.

This is what we meant when we talked about the expectations.  At first the game seems like quite a pretty, far too difficult traditional shoot ’em up.  However, as you make progress you realise that it’s not quite that.  You see, the key to survival isn’t really about shooting enemies.  Sure, you do need to do that but your primary weapon, as impressive as it looks, isn’t really up to the task.  Even small enemies take a few seconds to properly destroy which gives them all the time they need to hit you with their stunningly fast weaponry.

Instead, the trick is to survive until the next power up.  Use your stock of 40 homing missiles liberally but be mindful of not wasting them, take out enough enemies quickly until you get a resupply.  You’ll take damage all the time, it’s pretty much unavoidable, so be sure to use your shield at the right time and get that air strike in so that you can survive long enough to get to the next health icon.  It’s all about knowing where the next power up is and doing just enough to get there. 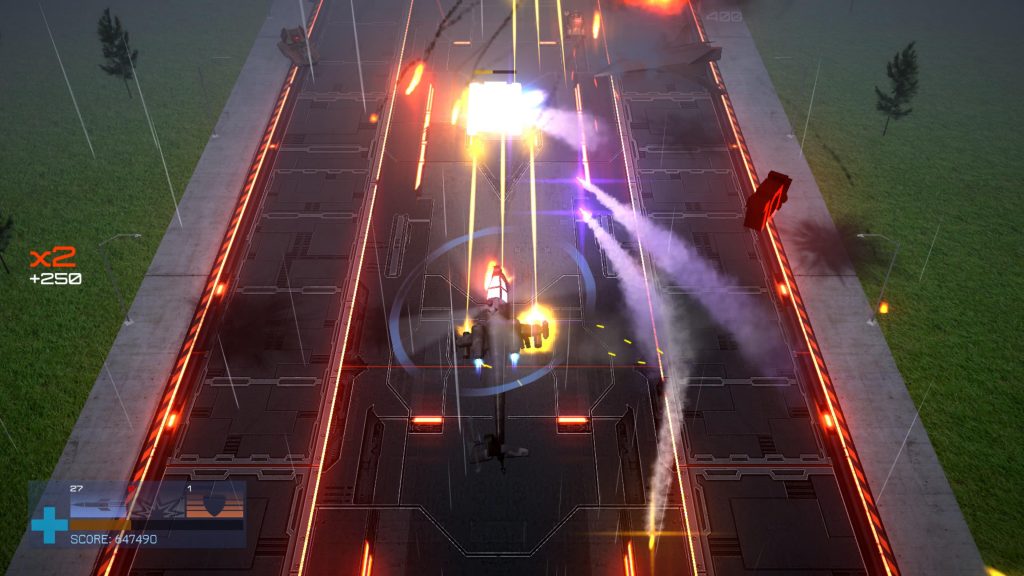 Once you’ve beaten a level, you can always select the next stage from the main menu.  This makes it a bit easier to get through the game but also the first level really was the only one that gave us a tough time.  We were about to take out the rest of the game in just one or two attempts (although we got lucky to not be hit by a couple of instant death moments).

After four levels, the game is over.  An end message says that you have to do “one more thing” and then it dumps you back in the main menu.  A new level shows up on the menu screen but that’s not actually available.  A bit of digging shows that the same is true of the PC version (from 2018) and the Switch one (2019).  Apparently DLC has been promised for the last three years and while it has never materialised, the publishers say it is due once the Xbox version is released. 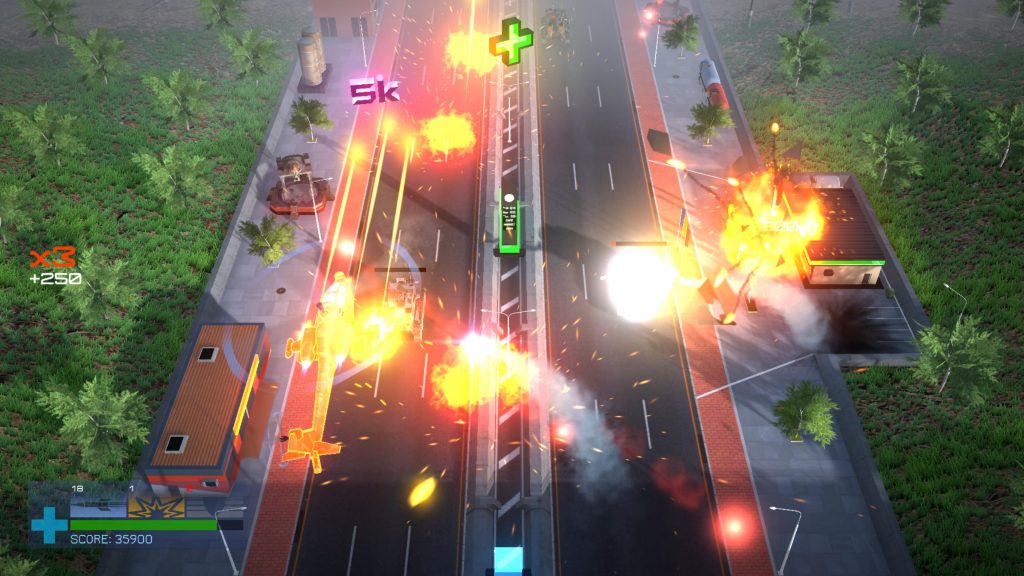 Other annoyances are also included.  The game has no pause function.  Pressing options or the touchpad do nothing.  In a shoot ’em up.  Ridiculous.  And power ups often spawn outside of the playable area (and these aren’t because they were dropped by an enemy that got hit by a homing missile, their positions are scripted).

The main problem though is the really just the gameplay.  A top class shoot ’em up requires carefully considered gameplay.  Take the shooters from Cave for example.  They are difficult but a highly-skilled player can get through them without being hit.  In Preventive Strike, getting hit is inevitable and unavoidable.  It’s also usually a case of ‘what hit me?’ with most of the damage being a bit of a surprise.  So really the level design is just a case of putting health icons just far enough away that getting to them is a bit of a challenge but close enough to make the game finishable.  This isn’t really a shoot ’em up, it’s really just about resource management.

Those visuals, as immediately dynamic and impressive as they first seemed, really get in the way of the action and are actually a lot less impressive once you realise how basic the enemy and level designs are.   There are no real bosses either apart from a couple of slightly larger helicopters.  The dynamism is really just from all the firepower filling up the screen but, like we said, your weapons are all bark and no bite and the enemy’s are just super-sonic rays of unavoidable damage.

So what we’ve got here is a game that’s very short, possibly unfinished and barely a shoot ’em up.  Getting through it is really just going to take you an hour once you figure out what it wants from you and then it’ll leave you thinking ‘is that it?’

Preventive Strike
3 Overall
Pros
+ Initially looks quite dynamic
+ Figuring out how to beat it is initially rewarding
Cons
- Very short and samey
- Barely functions as a shoot 'em up
- Currently unfinished and therefore the trophies can't be maxed out
- Careless design
Summary
While Preventive Strike initially looks like a fairly impressive budget shoot 'em up, it's really just a simple port of a barely-functioning game.