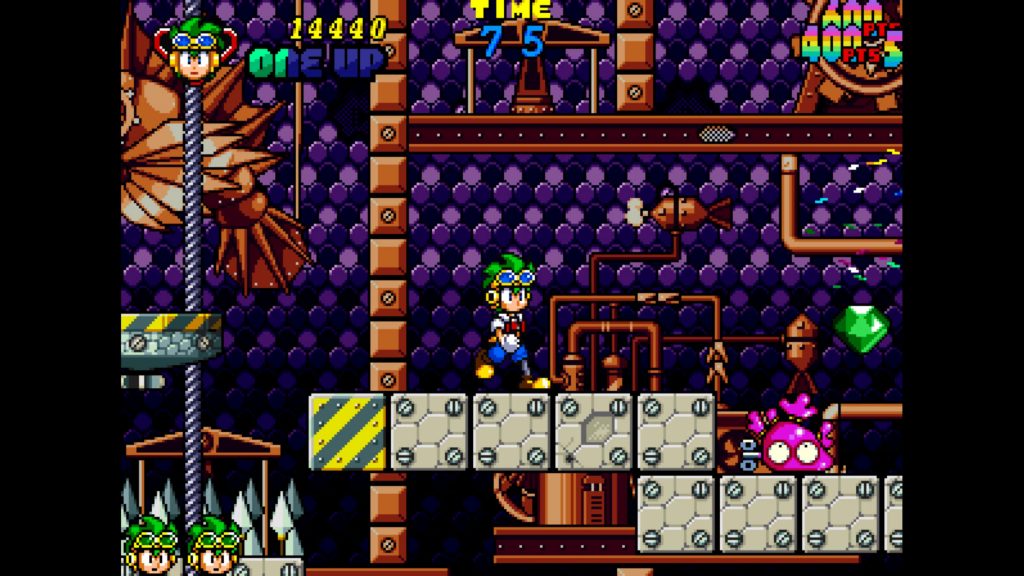 With so many games out there, it can be hard to notice the ones that never make it out of development. There are high profile examples of this, such as the ill-fated Star Wars 1313 or Sonic X-Treme on Sega Saturn that come to mind, but for every failed Sonic or Star Wars game, you can bet that there were tens, if not hundreds of lesser-known projects that just simply could not get off the ground for one reason or other.

Luckily, with the advent of emulation and diminishing returns on rights values, we have slowly, but surely been able to see some of these lost items become available in some form. Whether legally through retro publishers or through the fans, there is a lot to love about these painstaking efforts to give us gamers and aging developers a chance for this work to shine in public.

Cue ININ games then, a publisher who is slowly but surely making a name for themselves in the retro revival game. Thanks to their efforts, gamers in the west have finally been able to enjoy a lower barrier of entry into titles such as Panorama Cotton, Wonder Boy: Asha In Monster World and Ultracore, by making them playable on modern gaming systems in usually well realised, deluxe ports and remakes. Normally I wouldn’t be one to give such a spotlight to a publisher. However, when it comes to the notion of retro gaming preservation, few have put the effort in like ININ, and the concept of preservation is key in appreciating the subject of today’s review, Clockwork Aquario. 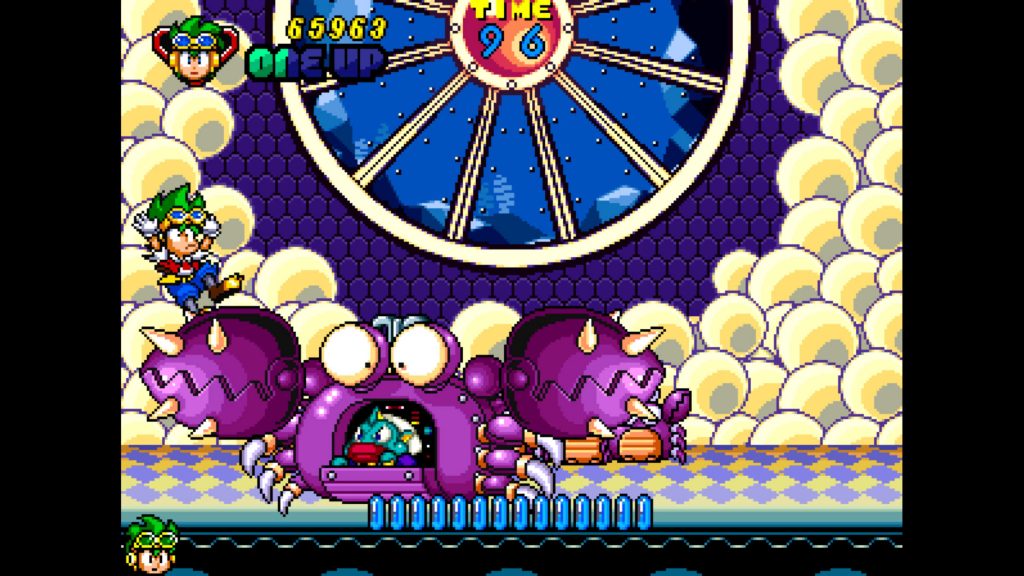 With creation starting in 1992, Clockwork Aquario was shaping up to be a decent, if not a mega hit for Sega Westone; a legendary team that were responsible for the likes of Wonderboy in Monster land, Mega Bomberman and other classic 8-16Bit games. However, as the arcade game came close to completion in 1994, it didn’t get much praise with focus groups due to the boom of fighting games taking most of the arcade credits and attention. Thanks to this, the game was shelved and has remained so up until 2020 when Inin announced that they had purchased the rights and had set to work completing the work that was started in the nineties.The story of how this game came to be is just one part of the package though. Ultimately, how it plays and whether it was worthy for resurrection are more pressing details to cover.

For the most part, Clockwork Aquario is a solid arcade experience steeped in classic Sega charm. You play as one of three characters, Huck Rondo, Elle Moon, or the robotic Gush. The trio must battle through five stages to stop the villainous Dr. Hangyo, who plans to take over the world with his army of clockwork automatons. Gameplay takes place on the 2D plane, with methods of attack being either punching or jumping on enemies, then picking their stunned bodies up and throwing them at others to earn points or defeat other enemies. Beyond looks and hitbox sizes, these characters are mostly the same in the gameplay department, so players are not necessarily shoehorned into picking ‘the best guy’, although Gush does have a disadvantage for being a much bigger target.

It’s a simple premise that does not do much to stray from established peers in the arcade platformer genre. It’s the kind of game that has been designed perfectly for the arcade goer. It’s simple enough to pick up, difficult enough to warrant more coins in the machine, but not so difficult that a player could not reach the end after spending some time to master enemy patterns and gameplay. As with most games of this platform and era, there isn’t much else to it, with the game only taking around 25 minutes to complete on a good run and the lions share of replayability being tied to high scores. For this release, further difficulty modes have been added, although these mostly just dictate how many credits are available to you, so there are no real gameplay changes between each tier. 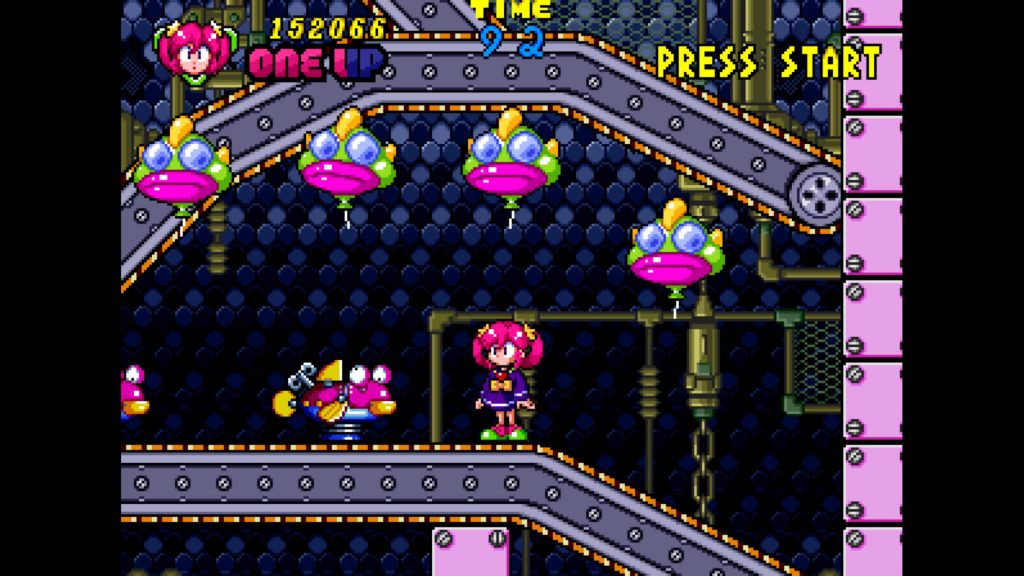 It’s safe to say that with the game length in consideration, there isn’t that much meat on the bone to go around, but that’s to be expected in some ways. What matters Is that the game itself is fun to play and whether it would have players coming back, which is something I personally would after having played a few rounds. There is an immediate appeal to the graphics and responsive controls that makes Clockwork Aquario incredibly playable.

Each of the five stages are broken up into short and sweet themed levels that feature both a 2D side-scrolling platform section, mini-boss encounter, and end of stage boss. While limited, the 2D sections are good fun to run and jump through, even if they are not particularly challenging. The stage locales look brilliant with some solid, chunky animated sprite work that adds life to the backgrounds and enemies. The music is also a standout, sounding very of-the-era with Eurobeat style nightclub rhythms and Axel F bothering melodies. Boss fights break up the platforming nicely with some solid, yet simple mechanics to face, although sadly, they lose their luster quickly once the patterns are discovered and exploited.

Beyond this though, there is not much else to say. It’s a shame that Clockwork Aquario didn’t come out sooner as it is up against such stiff expectation and competition. After all, thirty years have passed since this game was originally being worked on and inevitably, it would be hard to compete against similar titles that have had decades to build a following. There is no way of telling whether this game would have garnered the same sort of love that Streets of Rage or Ristar has earned. With this hindsight, most players would be forgiven for thinking that Clockwork Aquario is simply unremarkable and ultimately forgettable. 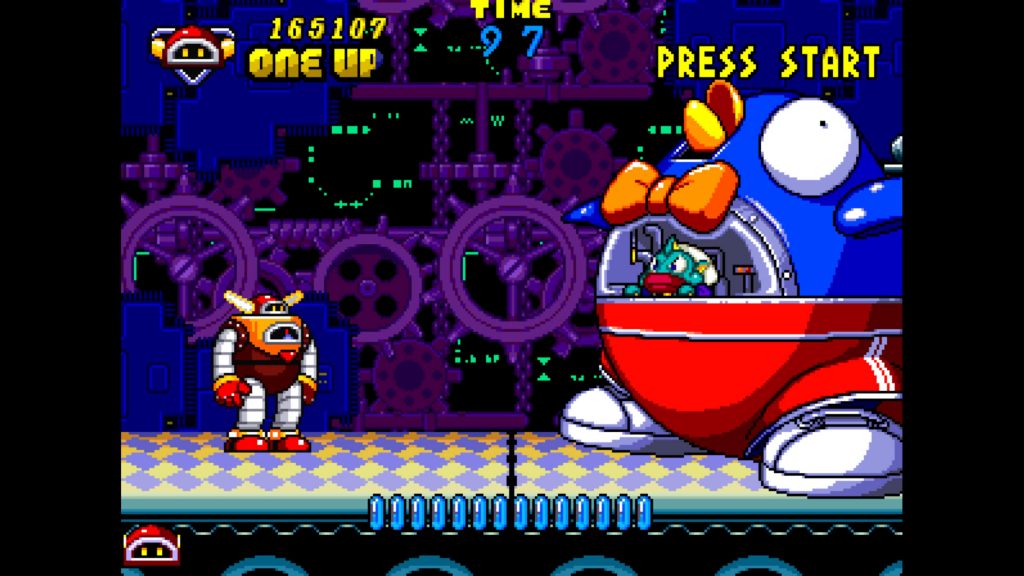 This is not to say that this will be your experience, however. There is a lot to love about this bite-sized, lost arcade game. For those that love game preservation and believe that no titles should be left behind,  this is a great title to pick up, even if only to see what could have been. Efforts like this deserve support and I would love to see more games like Clockwork Aquario get a chance in the sun, I can only hope that there are more lost gems out there, just waiting to be discovered.

Clockwork Aquario
7 Overall
Pros
+ Great looking sprites and character design
+ Easy to grasp, satisfying gameplay
+ Part of gaming history, regardless of issues
+ The soundtrack takes me right back to the 90’s
Cons
- The game just doesn’t leave any major impressions
- Very easy to get to the end with minimal practise
- Not much meat on the bone
Summary
After spending thirty years in the dark, Clockwork Aquario finally gets released to the public, thanks to ININ games. With solid spritework, excellent music and a satisfying game loop, this is a solid nineties arcade platformer. However, the limited game length and offering may leave a fair amount to be desired. This is one of those that love game preservation and classic Sega titles while others may find this game forgettable compared to their other thirty year old favourites.