Poison Control had us a bit baffled at the outset. At first, the sheer audiovisual bombardment and hyperactive radio hosts had us thinking we’d made an error of judgement in saying we’d review this, the latest from Nippon Ichi. Poison Control originally came out in Japan in June last year, with localisation of the considerable swathes of text taking until now for it to appear in the rest of the world.

We initially wondered if it was in the Disgaea universe to start with, one early mission seeming to confirm this with Prinnys in abundance and doods aplenty. We guess that it wouldn’t have been a Nippon Ichi game without a shoutout to their de-facto mascots. 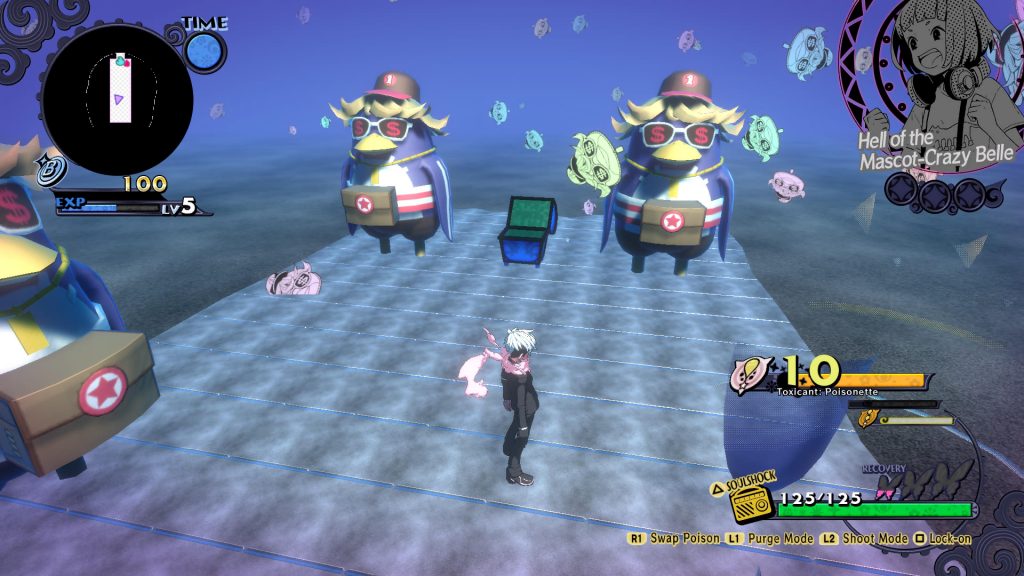 You play as a human main character who finds themselves in a hell of sorts. Practically this is a hub area where you select your next mission and upgrade your weapon attributes. The real action takes place in so-called Belles’ Hells, created from Delusions of invariably female sources. At least it’s not overtly sketchy depictions like in the Senran Kagura games, but it comes close on a couple of isolated occasions.

Each Belles’ Hell is introduced by Midori and Kikuri on Higan Radio, a pair of radio hosts: one hyperactive, one subdued. They take the form of fan mail to the radio station which the girls read out with varying degrees of incredulity. 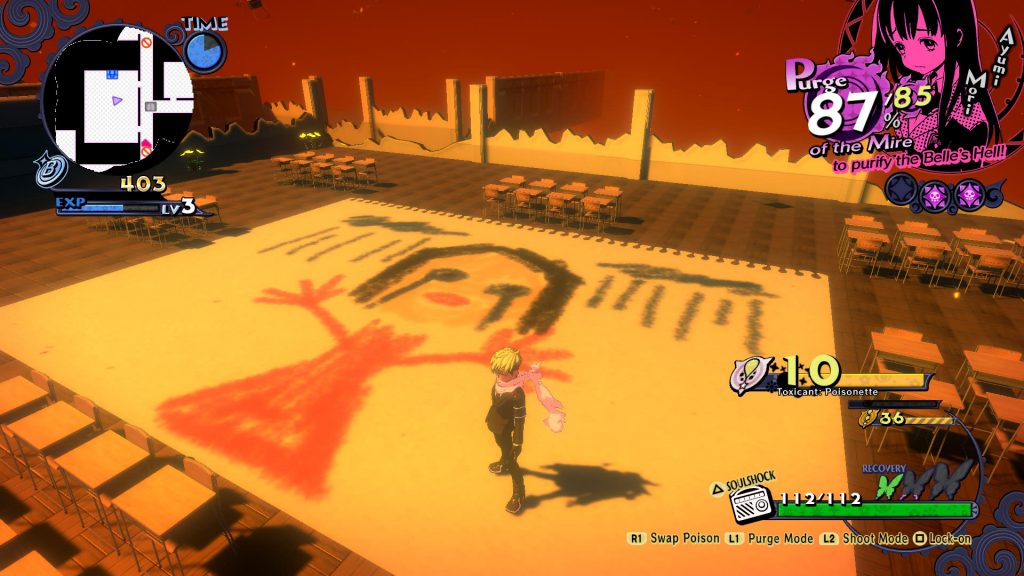 These delusions are effectively scenarios for you to explore and purify, for example, jealous school girls or one lass with an obsession with confectionery over everything else. Or in one amusing example, a girl that finds an adult magazine and proceeds to distribute a self-published manga with similarly risqué content around her school.

The delusions manifest as physical beings known as delusionals that are out to stop you. You’ll first encounter one called Poisonette who initially wants to steal your body, eventually deciding that helping out Belles trapped in their own individual hells is a preferable path instead.

Practically this means you have to subdue enemies (known as Kleshas) in each of the hells in the form of a third-person shooter. There’s a little nuance with regards shooting enemies, the longer you hold your reticule on an enemy, the more damage your next shot will do. Regards the term Kleshas, that refers to the Buddhist concept of the same name, that being mental states that cloud the mind and result in unwholesome actions. 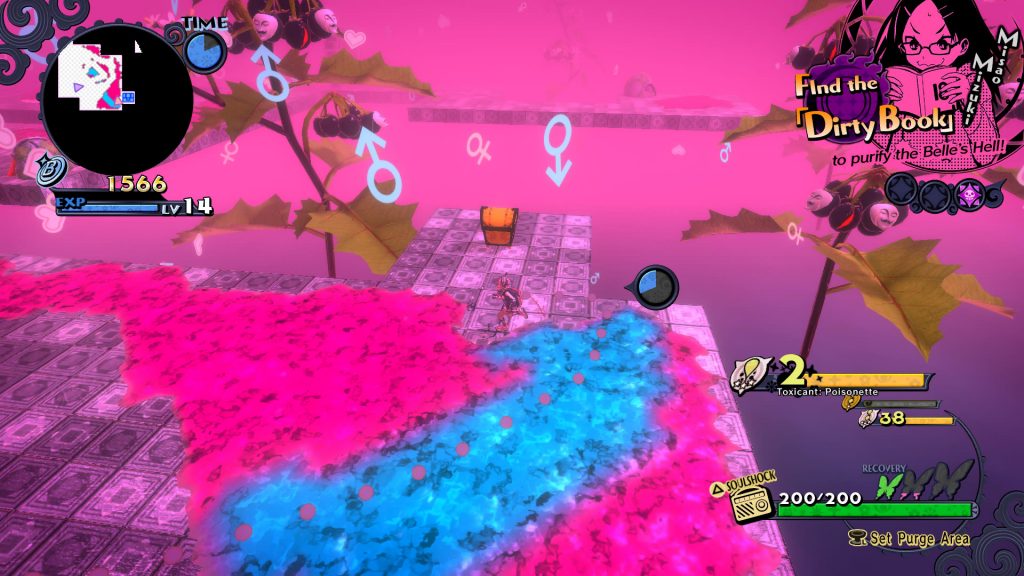 Additionally, you’ll have to purify mires in a Qix-like alternate mode where Poisonette has to cover up the physical manifestation of poison. Though even after more than sixty percent of the game we’re still not entirely sure of what makes a mire capture change to a yellow state. It’s also how you reveal support items and chests. Blue chests give you in-game currency and support items, yellow are plot-related or poison gems. Get all three in a level and you’ll unlock that poison for use as an equipped item.

These poisons fall into one of four categories: toxicants, deliriants, antidotes or catalysts. Toxicants are as close as you’ll get to a conventional weapon, initially being a standard slugthrower from Poisonette herself, ranging through to rapid fire and bomb variants among others. Deliriants are generally a heavy secondary weapon, antidotes having shielding and catalysts giving you extra item drop rates for example. 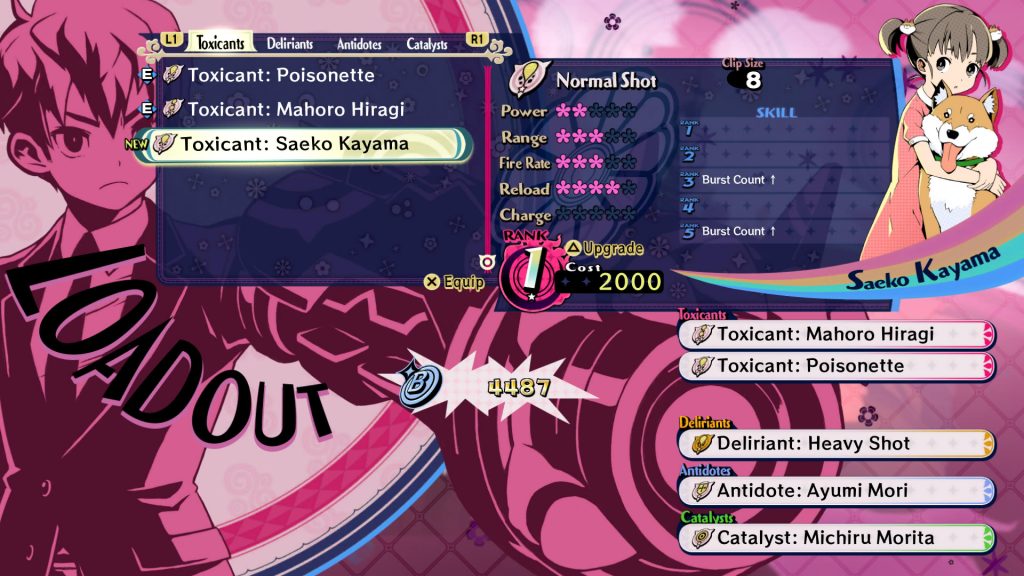 Toxicants, antidotes and catalysts can all be upgraded for added effectiveness and ammunition, very much essential as you reach later stages. The levels are grouped into the five circles of Hell, each one gated by a boss fight of sorts against a Naga beast. Initially they prove a fair challenge, but in the latter stages we soon found ourselves pretty overpowered and took them down very quickly.

Despite that we stumbled a few times on the same levels over and over, usually due to being completely overwhelmed by the sheer number of enemies that’ve spawned on top of us. Though cheesing it and running away remains a perfectly valid strategy, especially when the sub-section goal is clearing, say, 75% of mires. The beauty of that is when you clear that goal type, all the enemies that had spawned will disappear leaving you free to clean up in their absence. All the more important when you want to find the remaining poison gems. 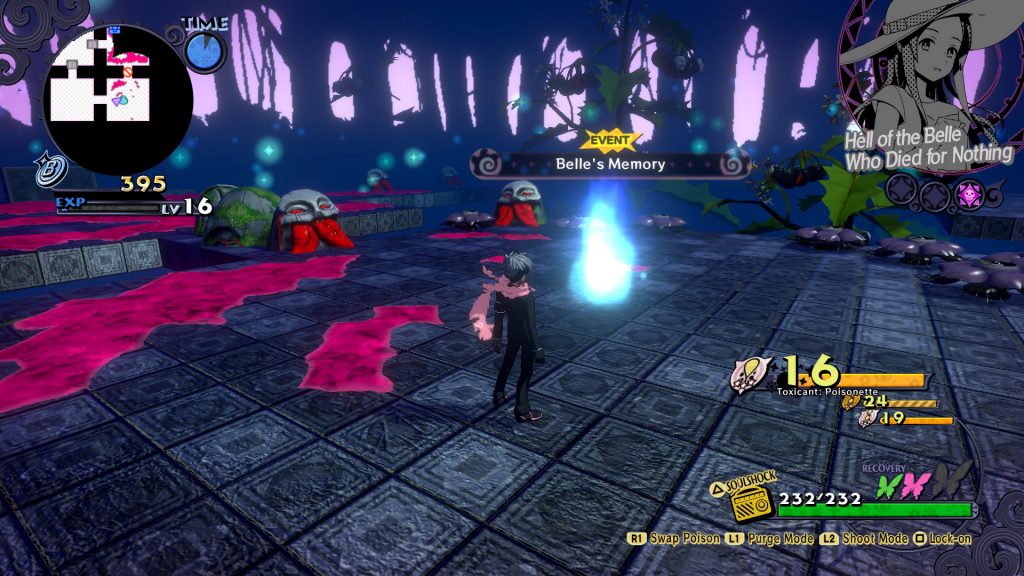 On the subject of poison gems, sometimes you’ll end up inadvertently triggering the level completion state when you’re not actually finished. When you’re as thorough as we like to be regards hoovering up collectibles, it’s a little bit annoying. At least it saves the gems you’ve already got, so you don’t have to collect them again when you go back.

Close quarter combat is where Poison Control fails a little. When you’re set upon by multiple enemies in a corner due to gates springing up behind you and mires ahead of you, you’re not going to last long at all. On several occasions we lost all three of our emergency recoveries in very short measure due to the onslaught. Not even our smart bomb could help. Level 10 in particular was such a challenging hump that we almost expected a platinum trophy like in a Ratalaika game at that point. 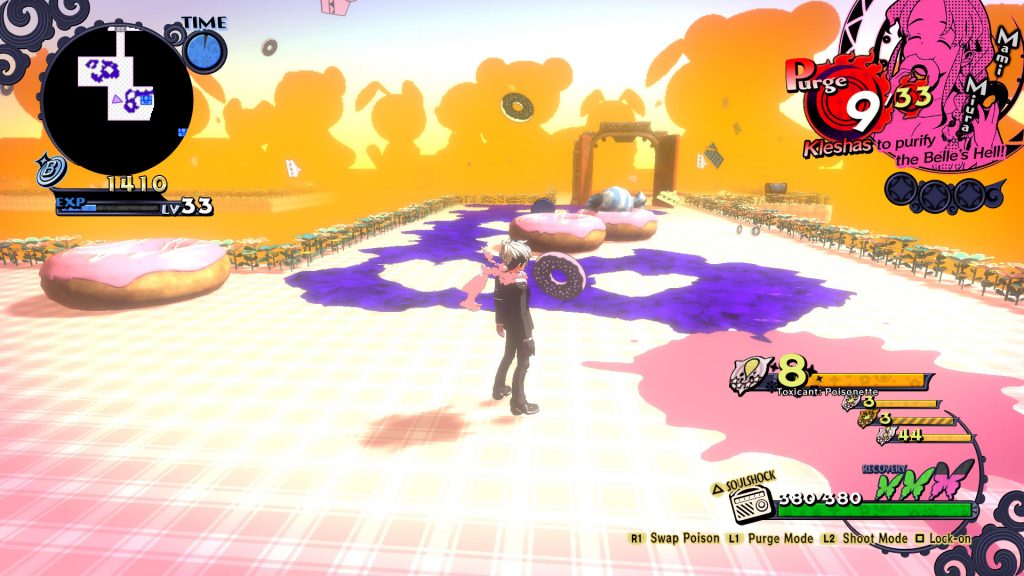 There’s a level timer to stop you procrastinating too much, though we only found it to be a problem on the longest of multiple stage Hells, and even then, we still had a few minutes to spare. We guess its to stop people farming particular levels for upgrade currency excessively, but we never really had a problem with funds anyway.

Music and sound design is very bright and vibrant, even with the genre the west forgot persisting. Dubstep is still very much a thing in the Poison Control world. It fits though and doesn’t feel that jarring, though we’re not exactly rushing out to listen to Skrillex on Spotify.

In conclusion then, Poison Control is pretty good. Yes, it veers into weeb territory a little, but what are you to do? It’s not overtly sexualised like anything from Honey ∞ Parade at least. The scenarios you’ll encounter are fun and the core gameplay loop is fun. You’ll occasionally have to replay levels if you’ve missed the poison gems on the way through, but we’re happy to report that we’ve not had to resort to the typical RPG grind to level our characters sufficiently. It’s definitely worth playing anyway.

Cons
- Close quarter combat is a definite weakness
- Premature level completion can be a problem
- Some levels can lead to you being overwhelmed a little too frequently
- Purification mechanic a little oblique
Summary
Poison Control is a fun ARPG as you descend through the circles of hell. It doesn’t take itself too seriously, and neither should you. Get to it dood.