Pinkman+ is the latest offering from Finnish Platinum purveyors, Ratalaika Games and is a 2D platformer which comes from one-man dev team, Green Dinosaur Games.  The obvious inspiration, both in terms of gameplay and visuals, is Super Meat Boy and N+ but with the twist that the titular Pinkman has a jetpack which adds an extra element to the platforming action.

Set over 100 levels, the idea here is to get Pinkman to each level’s exit.  Initially this is as easy as just running and jumping there but the game gradually adds extra elements such as switches, teleporters, disappearing blocks and various obstacles.  You traverse each stage with the d-pad/left stick controlling movement,

acting as the jump button,

controlling your jetpack and

zooming the screen in and out.

toggles the music on and off also.

The jetpack gives you a second or two of flight before needing a slightly longer cooldown.  It has a couple of advantages.  It lets you cross larger gaps but also it allows you to control your descent and, to a degree, correct jumps that you make.  This definitely takes the edge off of some of the more tricky parts of the game but is used well too with just the right amount of usefulness. 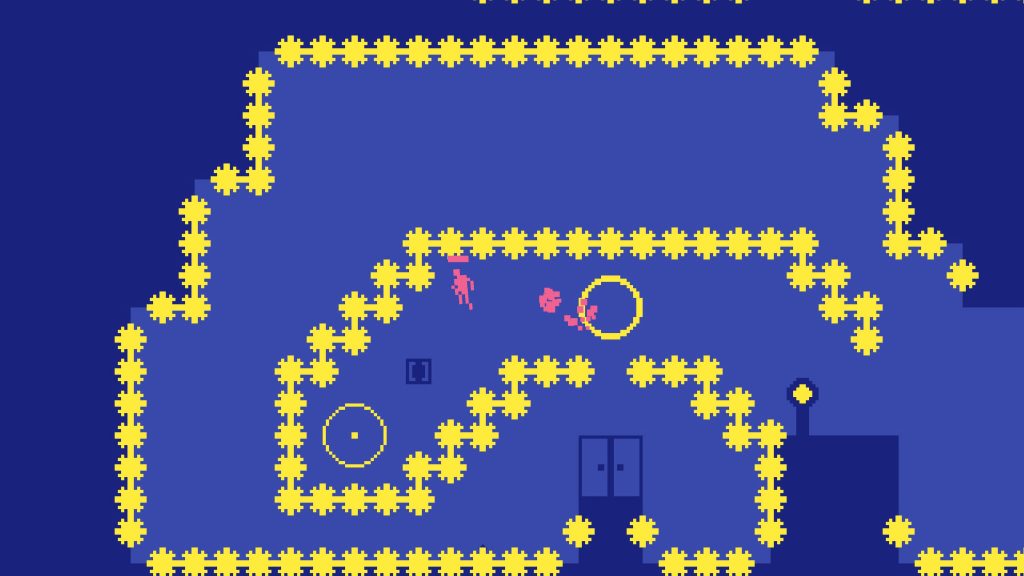 It’s pretty straightforward stuff, old-school platforming action without too much in the way of level complexity.  So often with indie games, these sort of titles get bogged down in increasingly complex mechanics but Pinkman never succumbs to that.  The levels are short but fun with generous checkpoints and lightning-fast restarts.  Even when a new wrinkle is introduced to the game, it never becomes what the game is about.  For example, around half way through ghosts are introduced that chase you down.  They are the sort of thing that a more hardcore platformer would torment you with but not here.  Instead any new elements are used judiciously, just enough to present a challenge but never so much so that you want to kill yourself and everyone around you.

That is Pinkman’s triumph.  In this post-Souls world many games like to revel in being difficult, especially fast-paced platformers like this but here you don’t get terrorised by the levels.  There are sections which are tough, even a little maddening, but when you get past them there is always a handy checkpoint there, letting you know that you’ve beaten it and can face the next challenge without having to worry about perfecting your muscle memory throughout a stage.  There’s no time trial nonsense either.  Praise be! Each new obstacle that is added fits well into the overall difficulty curve too so it’s not like ‘right, you’ve had your fun, now it’s time to die’ and that’s good because it means that Pinkman is enjoyable right to the end.  As new things are added like lasers, wrecking balls and machine guns, it gives you something else to think about but the levels stay at roughly same size throughout and the developer does well to avoid cramming in each type of obstacle into every level.  Of course, that means that people looking for their next Meat Boy fix might be disappointed and it does mean that the game’s 100 levels are reasonable easy to conquer within just a few hours but we’d prefer that over having to devote hours of our lives to every new challenge.

As you can tell from the screenshots, the graphical approach here is pretty minimalistic to say the least.  Each time you die, the level gets randomly recoloured too but the colour combinations are never repulsive and the action is always clear.  That handy zoom out option is good also if you don’t want to be making leaps of faith but we barely used that facility and managed to get on just fine.  This is mainly because the level design is actually pretty good.  And besides, if you do die, the next restart is usually going to put you right in the vicinity of your latest misstep. The game’s sound is essentially a mixture of decent synthwave tracks that we generally liked and various death sounds.  It’s all quite stylised but without the music playing the game does sound pretty sparse.

Of course, being a Ratalaika joint, you’ll be getting that Platinum trophy pretty quickly.  In this case beating level 45 is enough but we enjoyed playing through to the end.  As ever, the PS4 and PS5 versions are identical with no improvements in resolution, frame rate or haptics being applied to the PS5 game.  The reasoning there is that having two versions will net trophy whores a double Platinum but hey, it’s Rata and we all know the business model by now.

This one ended up being a surprise to be honest.  With the whole PSC crew drowning under multiple games to review, it fell on me to play this one and I wasn’t expecting to enjoying but I did.  A lot.  Its platforming action definitely leans towards the gentler side of the spectrum but that’s just fine.  Purists/masochists might want more misery and, sure, time trials and leaderboards would flesh out the package a bit but 100 or so levels of quickfire platforming for four quid seems like a great deal to us.

Pinkman+
7 Overall
Pros
+ Fast
+ Good level design
+ Not too sadistic
+ Good music
+ Cheap
+ Gentle trophy requirements for those who want them
Cons
- Might be a tad easy for some
- No extra modes
- No PS5 upgrades
Summary
Hardcore platformer fans may want something a bit more taxing but this pacey-but-gentle game is a joy to play through.