The run and gun genre has been about for so long that when a game comes along that tries to bring some originality to it I take notice. The best of the genre have really tight controls and make you feel like a badass despite actually being really fragile. Bite the Bullet has released on PS4 and, far from being fragile, you can eat every enemy you come across. 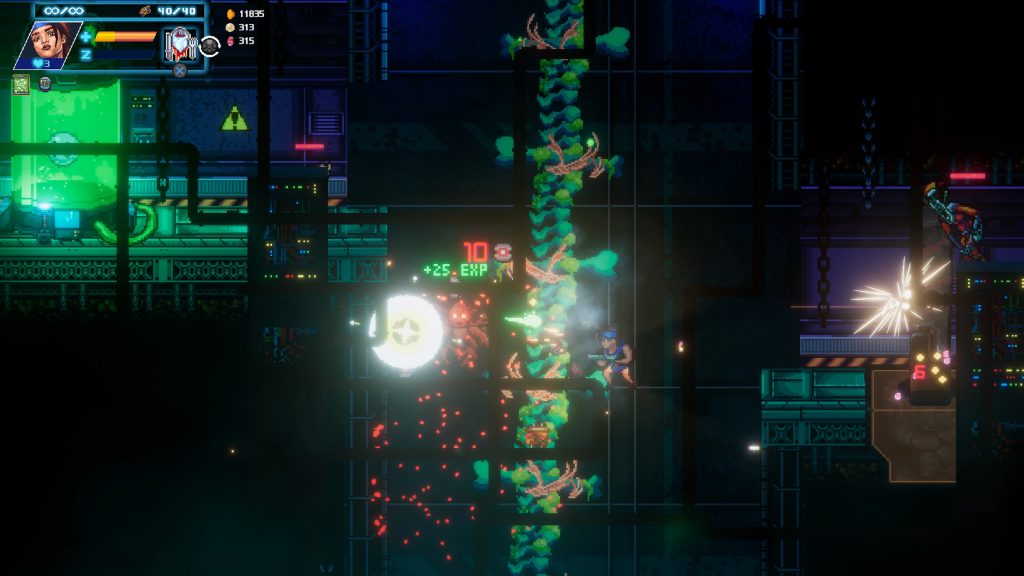 The story goes that the Earth has become irradiated and so all the rich people leave to live elsewhere. The people left behind mutate and turn into Ghouls and the space faring humans develop bionodes that allow them to eat anything at all. These humans return to Earth and clash with the mutants they left behind. You play as one of two mercenaries (Chewie or Chewella) who have been tasked by DarwinCorp to collect DNA from the mutants on Earth. You do that by eating them, of course.

You’ll make your way through eight levels shooting and eating everything in sight, ending with a boss fight as you’d expect, in single player or two player local co-op. Things aren’t that simple however, but let’s start with the basics. You can run, jump, shoot and dash in any direction (which also counts as an attack). There are two control schemes but I’d suggest the ‘Pro’ one which puts shoot and jump on the triggers, simply because you can and often need to aim with the right analogue stick. Crazily, for a 2D action game, you can only use the left analogue stick to move. The d-pad is used for a couple of things but they could have been assigned to the left analogue without issue I think. 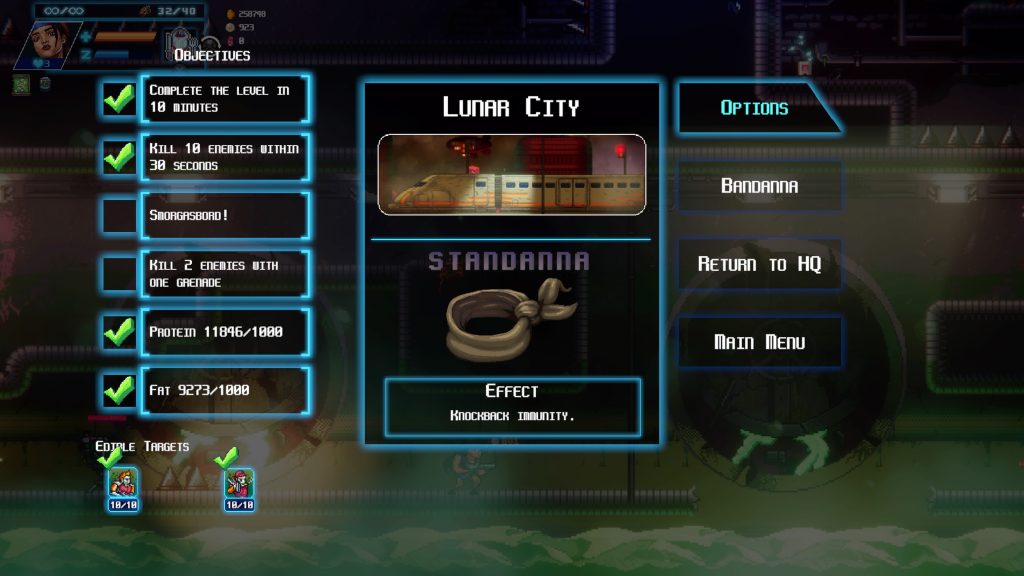 As the controls imply you’ll be running from left to right shooting enemies and jumping over obstacles and up platforms. You are quite mobile, being able to wall jump as well but shooting is the primary action. You’ll encounter turrets, drones, soldiers with machine guns, grenades and miniguns as well as others. Everyone can be eaten, but you have to stun them first. You do this by shooting them until they reach a stunned state. Once they’re stunned you can walk up and eat them which grants you calories, fat and protein. The more fat you eat the bigger you get, the more protein you eat the more muscular you get. Being fat slows you down and affects your jump height, but you take less damage. I’d guess being more muscular will make your dash attack more effective but I don’t know.

Bite the Bullet is massively underexplained. You can eat everything and you do get health back when you do but should I eat everything or should I just kill things sometimes? I get fat but each action (jumping, dashing, etc.) consumes calories, fat and protein so you eventually turn thin again. It’s like they had the concept and yet didn’t fully flesh out the idea. Similarly you can activate Zombromode which turns you into a hulk-style creature once a bar is filled, but although it makes you invulnerable you can no longer shoot or eat and it’s not like you’re destroying things, you don’t really feel any more powerful. 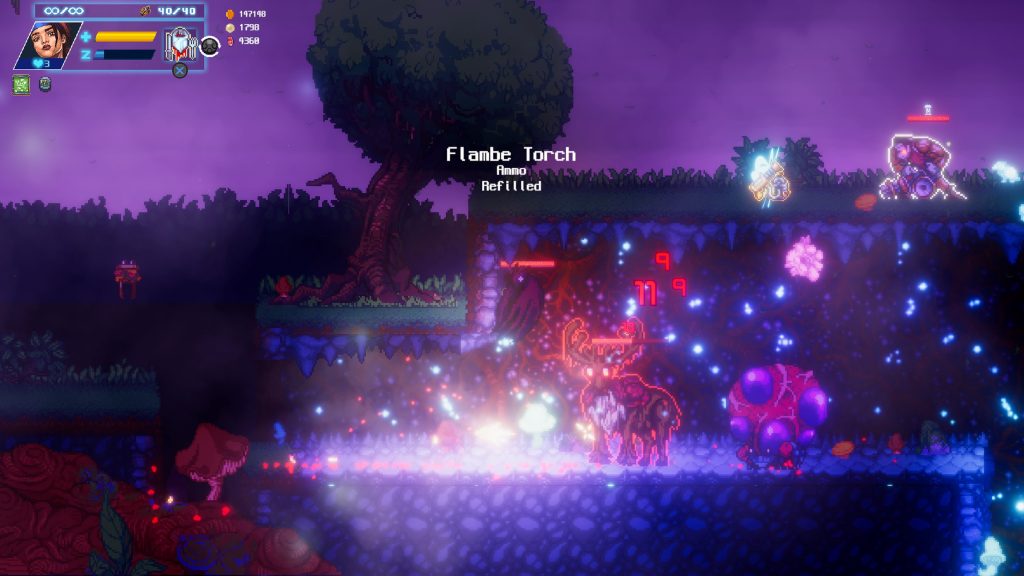 There’s a massive skill tree which lets you specialise in eating meat, veg, metal or everything which is very overwhelming to look at. I took a skill which would automatically activate Zombromode when I ate a combination of foods and I hated it. There are some useful skills on there, like being able to eat rotten enemies without repercussions and shortening the eating animation but there are also some that don’t feel that worthwhile.

Also during levels there are objectives to complete which will get you a bandanna which gives passive bonuses if you complete them all. There are eight objectives generally and they range from eating an amount of a certain enemy type to completing the level in ten minutes, completing a bonus stage (which you have to find), blocking a certain amount of damage with a shield and many other things. You need to complete them all in one attempt which feels a little unfair and just stretches the game length out. This is a little unnecessary as although there are only eight levels they are split into multiple chunks and I’ve spent nearly two hours on some levels. 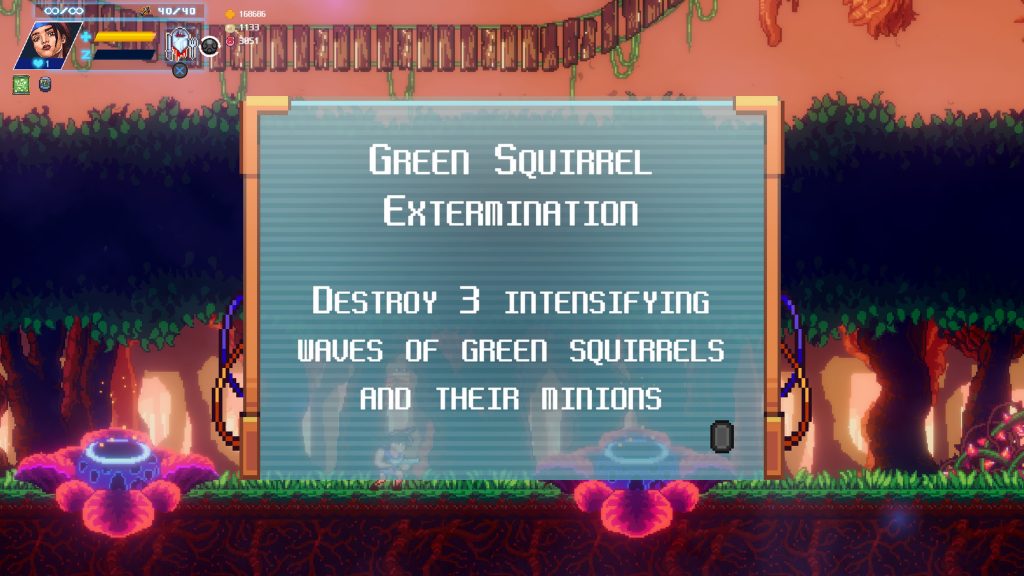 Levels are very long and overly complicated at times. Yes you can run through them quicker than that but some levels involve a lot of teleporters and the map is near enough useless. If you’re trying for all the objectives you’ll want to search everywhere and that takes a rather tedious amount of time. Then if you don’t complete all the objectives you’ll want to return to the level to try again and the game will give you side missions where you’ll have to return to previously beaten levels, but not tell you where in the level and they’re not clear on what the rewards are once you’re done.

The bosses at the end of levels are okay. The patterns are very basic. They’ll have two or three phases where you have to take down a life bar and then it’ll refill and it’ll be a slightly different phase. The problem is your weapons take down the bosses health so slowly. You start with an unlimited machine gun and will eventuallly unlock a shotgun, flamethrower, critter launcher, railgun and a rocket launcher and each has a secondary function too. Only the default gun is infinite so you’ll burn through your ammo on the other guns but will only slowly be chipping away at the health bar. 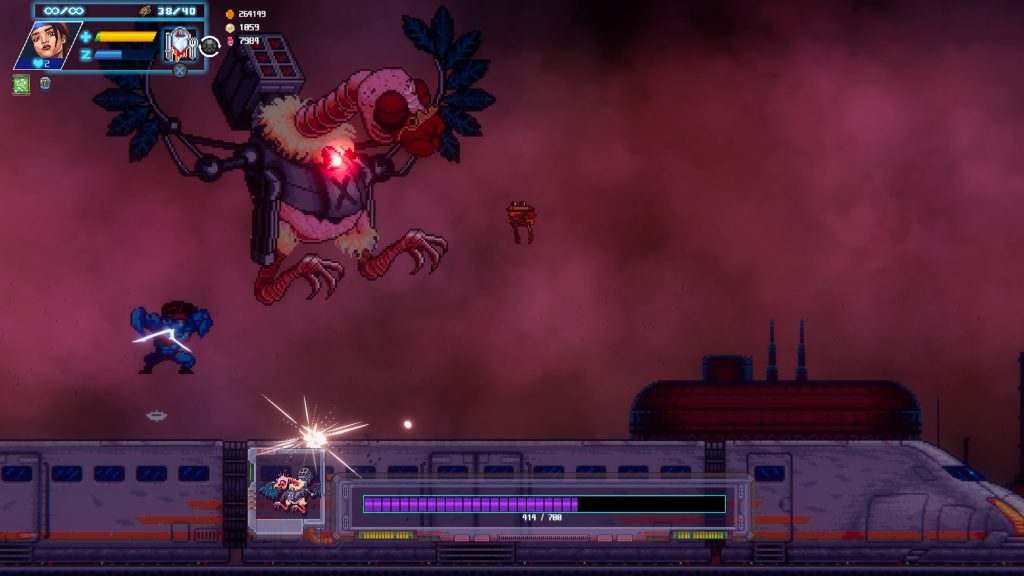 It makes what should be a fun, action packed genre a bit of a slog. The combat itself is fine but everything around it isn’t implemented effectively or in an enjoyable way to the point of feeling needless at times. There are also other problems. I started playing it on the PS5 but there’s a bug that messes up the visuals so the colours are blown out and the dark areas are too dark making it nearly unplayable so if you only have a PS5 then avoid this, those with a PS4 are okay.

I’ve had the game freeze on loading screens and when talking to someone in a mission. There are checkpoints in levels but if you quit the game it’ll only save your character progress, not where you were in a level so you’ll have to start the overly long level again. The grenade launcher on the machine gun does literally zero damage, making some of the level objectives impossible to complete. Certain trophies haven’t unlocked for me. Also, it’s not a bug this time but for how vertical the levels are it’s sometimes impossible to tell what’s a death pit and what leads to another part of the level which is a massive oversight.

One area where the game definitely succeeds however is in its music. You start off with a good but nothing special rock track, some levels are really good and others less interesting but part way in you unlock the ability to change to a synthwave sound track which is great. You can choose which track to listen to at the beginning of the level so if you find one you’re not a fan of you can change it to one you do like. However they even mess this up, as if you change to synthwave then it changes the visual style to very dark with bright neon colours which, much like playing on a PS5, makes the game harder to look at. When you can see the visuals they’re actually very good pixel art with plenty of animation. The bosses are particularly detailed. 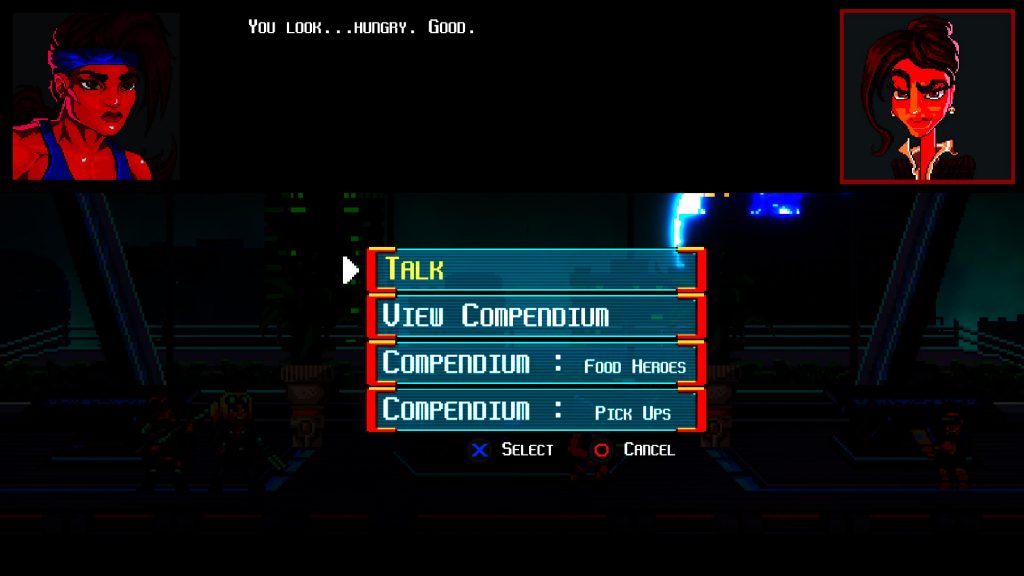 There are some good ideas in Bite the Bullet and the basics are done well, but there is so much around that which is either unnecessary, not explained well or just poor or broken that it makes it a tough game to recommend. Hopefully they’re looking at patches to fix the problems I’ve brought up in my review, if so I’ll try to keep you informed. There’s a fun game in here, but its too bloated and should have been put on a diet.

Bite the Bullet
5 Overall
Pros
+ Basic shooting is enjoyable
+ Some interesting ideas
+ Good visuals and music
Cons
- Underexplained/needlessly complicated mechanics
- Bugs
- Broken trophies
Summary
Bite the Bullet gets the basics right when it comes to run and gun gameplay but despite being an interesting idea the eating mechanic feels unnecessary, the levels are overly complicated and long and there are far too many bugs and other issues.