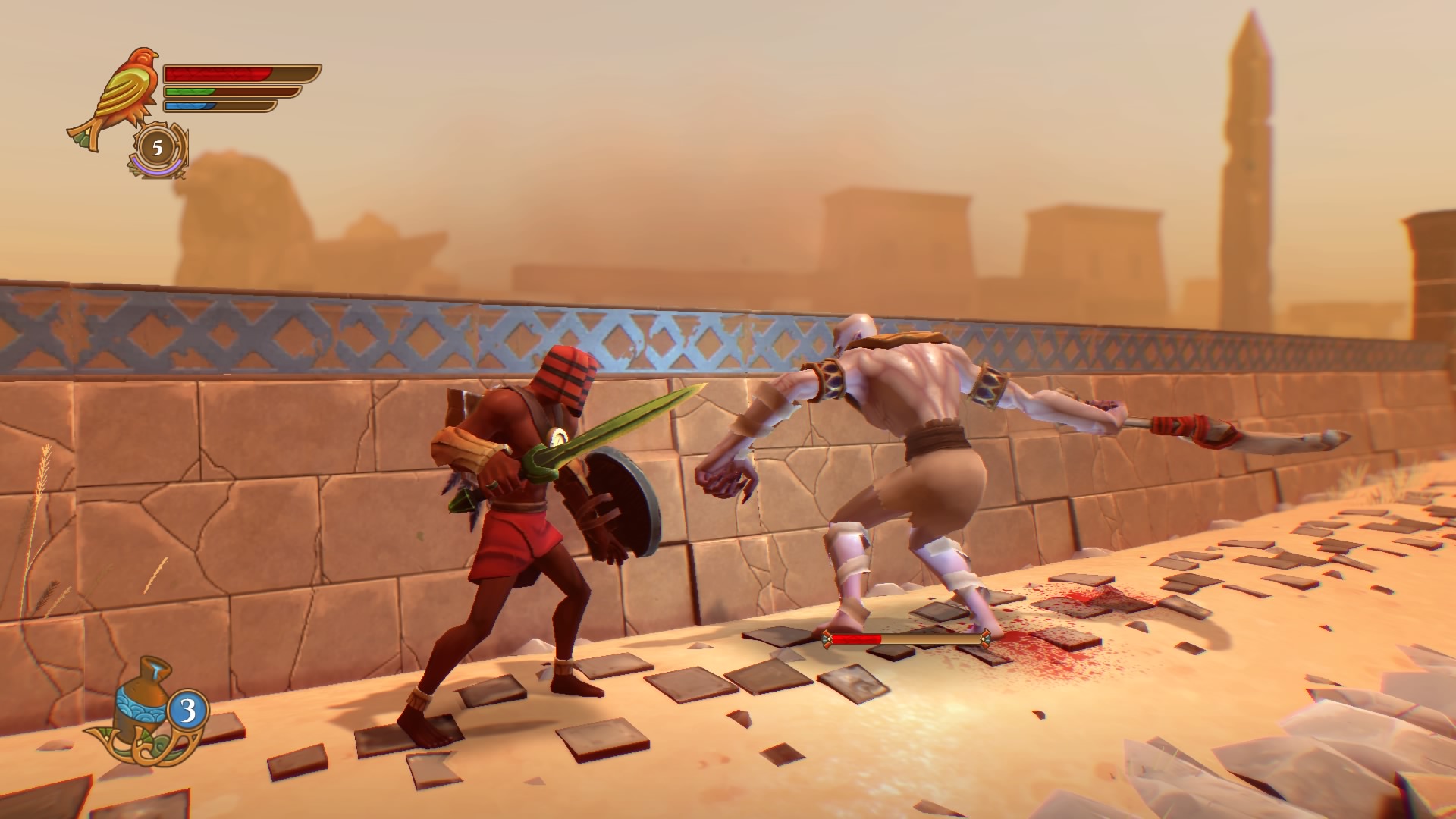 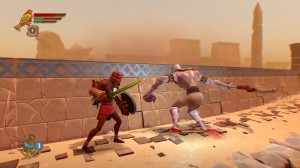 Dark Souls was such a successful game that it’s not only spawned sequels, but has also spawned a genre of itself defined by difficult combat and deaths where you leave your experience behind.  Pharaonic is a 2d game set in ancient Egypt, and the latest game to take inspiration from the Souls games.

In this game combat is king, and it is clear a lot of time has been devoted to refining the combat system.   At your disposal you have a light and a strong attack and a block and a parry, mapped as in Dark Souls to the shoulder buttons.   Wading in going full attack is not going to win the day here, and caution is key.  You’ve a stamina gauge which depletes for every attack or dodge, this only replenishes when you aren’t attacking.  This gives the game a wonderful sense of rhythm, with you constantly looking for openings to both attack and rest.

At its simplest combat involves you having to dodge incoming attacks and strike out with your counter attacks.  The dodge button 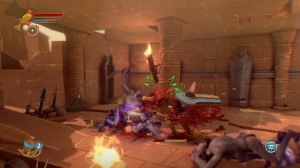 you’ve got allows you to either roll away from your enemy, or remain stationary and just swerve away.  What makes this system beautiful is the fact the roll move uses significantly more stamina than the stationary dodge.   You are therefore faced with a brilliant example of risk versus reward.  Choosing either the more risky close combat dodge in order to conserve your ability to counter attack, or rolling out of range of the attack but leaving yourself with no stamina left to counter.  Once you get to grips with the combat it really is decent, and every fight feels like it could result in your death if you mess up.

The game takes this simple combat premise and forces you into difficult situations, through enemy placements and environmental traps.  What this means is that you will more than likely die a lot here.  Just as in a Souls game though when you do die you leave your experience behind, and if you can make it back there without dying again you can collect your experience.  Once big difference in this game is that you automatically level up once you’ve collected enough experience, and you don’t need to travel to your nearest bonfire.  This subtle change from Dark Souls makes the game slightly more forgiving, and at the cost of losing the ability to customise which stat you level up, you get a much more fluid and accessible system. 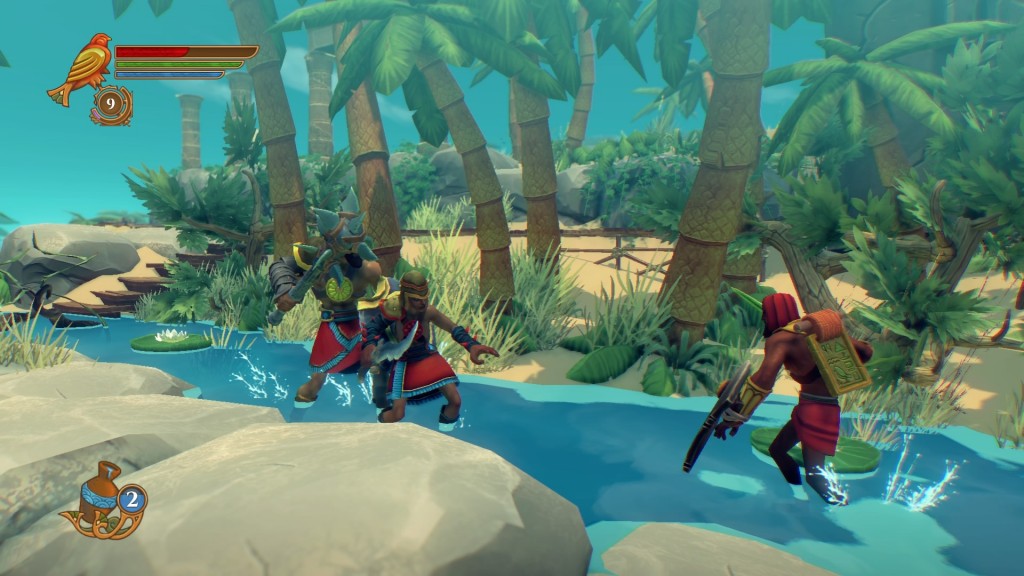 Adding into the combat is the range of weapons and armour on offer.  The weapons range from huge improbable cleavers, to shorter more manageable swords, and the armours all stand out from each other visually.  Each item affects your weight and stamina, and you’ll need to make your own decisions over how you want to play.  It really is a flexible system, taking a lead from the Souls series but streamlining it to be more accessible.  It’s my view the changes in removing the menu screens for both levelling up and weapons is detrimental to the overall game, I would have liked to see that extra depth here.

Graphically things look nice and refreshingly bright. Considering this is working to the Souls mould of games you’d expect it to look all dark and gothic.  However being based in Egypt has allowed the game to showcase blue skies, lush oasis and warm sand colours.  This really makes the game visually unique and memorable.  Also the game uses a camera which zooms and pans slightly, but one which remains focused on the action.  This means your character is always front and centre, and always makes sure you can see everything you need to. 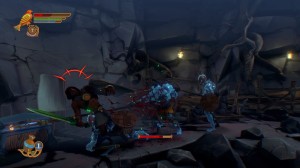 Aside from the combat being similar to Dark Souls there are other less obvious similarities too.  The locations you traverse intertwine with each other, carrying shortcuts and treasure paths.  Whilst the game plays out on a 2d plane, you will be turning corners and traversing a traversing a 3d space.  There are also the ambiguous quests, and the need to search for answers yourself.  I thought the story and level design worked well here, and each area you find feels a consistent part of the same story.  Pharaonic also has that one more go feel, and the fact that every time you die you just want to get back to your experience.  This is typified in boss battles.  Anyone who has played Dark Souls knows the quickest routes to run back to a boss once you’ve been killed, and also how addictive these runs can be.  This is something you’ll be doing lots of here.

Pharaonic wears its influences on its sleeve, and can be looked at as being a 2d version of Dark souls.  Great things can come from copying a tried and tested formula, and in many ways Pharaonic succeeds in crafting a unique take on an established genre.

Pharaonic
9 Overall
Pros
+ Impressive combat system + Lots of game on offer + Nice bright visuals + Well balanced difficulty
Cons
- Lacks the RPG depth of the Souls series of games
Summary
They say the greatest form of flattery is imitation. Pharaonic is a brilliant Dark Souls-a-like, taking heavy inspiration from that series. With tight combat and a setting not often seen in games, this comes highly recommended.

One thought on “Pharaonic – PS4 Review”