Until 2017’s F2P mobile abomination, Animal Crossing had always been a strictly Nintendo console joint. Debuting on the N64 as Dobutsu no Mori, it made the leap to western shores with a fantastic port for the Gamecube. Various versions have come and gone, piling on the gimmicks as they go, but at its core, Animal Crossing is fundamentally the same game that first released in 2002.

Castaway Paradise’s developers Stolen Couch Games have taken the core gameplay from Animal Crossing and altered the mechanics enough that Nintendo’s lawyers haven’t told them to stop since the game first appeared as a Facebook game in 2014. At any rate, it’s the closest you’re going to get to running around with Tom Nook et al on a current gen console until Nintendo themselves see fit to release a Switch version. 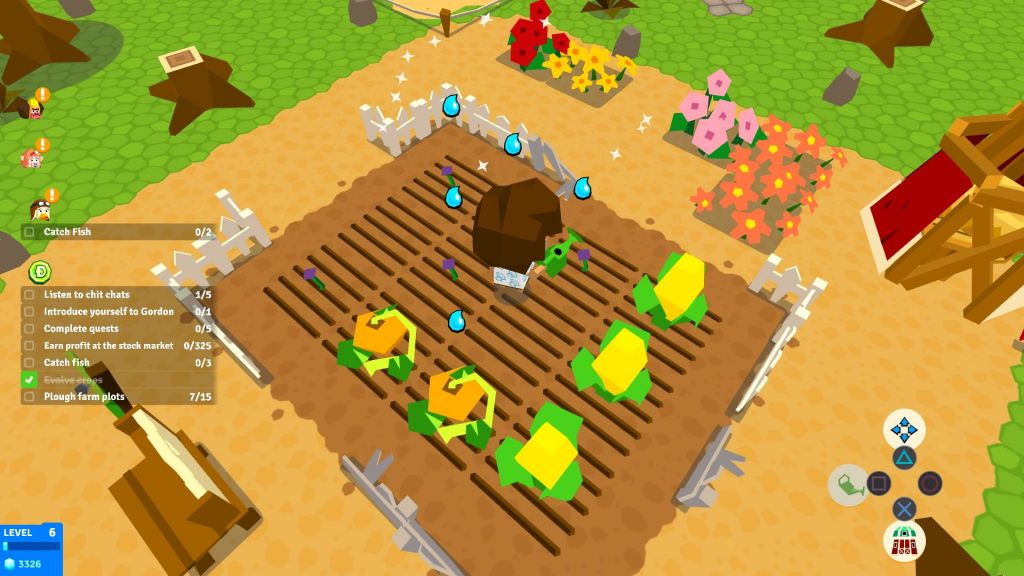 If you’ve ever played an Animal Crossing game, you’ll know what to expect. Collecting fruit, catching fish and insects and donating them to the local museum are your main gathering activities. Castaway Paradise harks back to the halcyon days of the Gamecube and DS iterations in terms of the sheer addictive hook of just one more task before you call it for the night.

Paradise eschews the more complex aspects brought to the life simulator genre by the likes of Stardew Valley and Harvest Moon. It keeps it fairly simple with regards mechanics, you can break rocks with your pickaxe, dig holes with your shovel and chop trees down with your axe for example.

Castaway Paradise adds tending to crops in addition to the familiar Animal Crossing tasks of fishing and catching bugs. You can also grow a large variety of flowers as well as many different fruit trees and you can also collect shells that wash up on the seashore. There are trophies for collecting all of these, as well as every flower, every crop and every fruit. 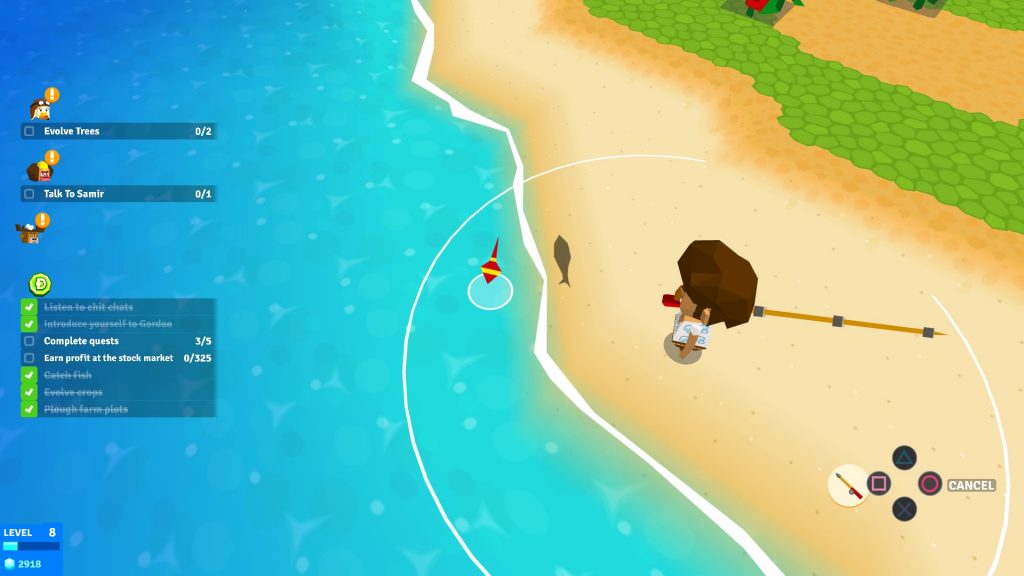 When you are initially washed up on the island, after a short tutorial you’re thrown into the thick of it. The areas with extra buildings, including the museum, are gated at the outset and you’ll have to earn money by performing fetch quests or providing specific items for the other islanders. These tasks range from the mundane to overly demanding. The requirement for catching a particular fish being particularly annoying as it’s often difficult to distinguish between different fish sizes.

There are seven barriers to unlock with puzzle pieces you’ll initially unlock by finishing quests, eventually you’ll get rich enough that you can bypass the work by buying the tokens in the shop.

There are thirty two individual insects, fish species and seashells to collect. The first two sets are straightforward enough to fulfil, but the seashells are only refreshed every twenty four hours and it’s pot luck as to whether you get any new examples. It all smacks of artificially prolonging the game’s life a little. 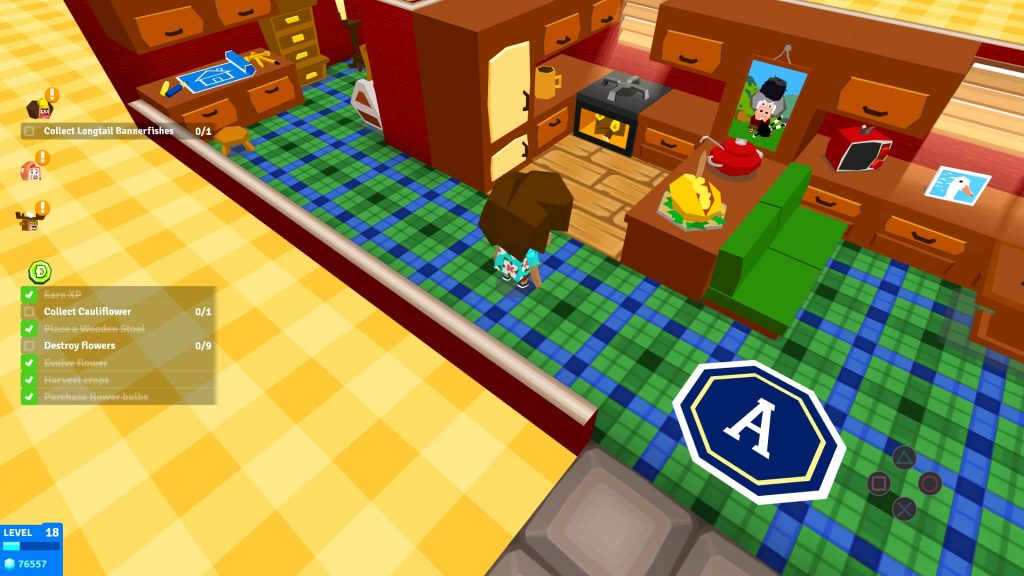 The trophies for growing all fruits, crop and flowers are also hamstrung but more due to the last fruit being gated to level 25 and the final flower only being available at level 34. You’ll have to return again and again if you want to get that elusive platinum trophy. Castaway Paradise certainly makes you work for it.

You can earn up to 250 daily quest points by performing yet more specific tasks and unlocking yet more collectibles. These are a great way to galvanising you into action by doing things you’d not necessarily bother with otherwise. The collectibles take the form of badges that you’ll have to plug away at to unlock, no doubt on your way to get the other items on your checklist.

Unlike Animal Crossing, there’s no day night cycle here and the villagers you have at the outset stick around for the duration. There’s an angry Scottish gorilla and a pathologically happy elk who is also a French pastry chef for a start.  We’re at the point where quests we played early on in the game seem to be repeating themselves a little, a limitation of the fixed character roster making itself known. 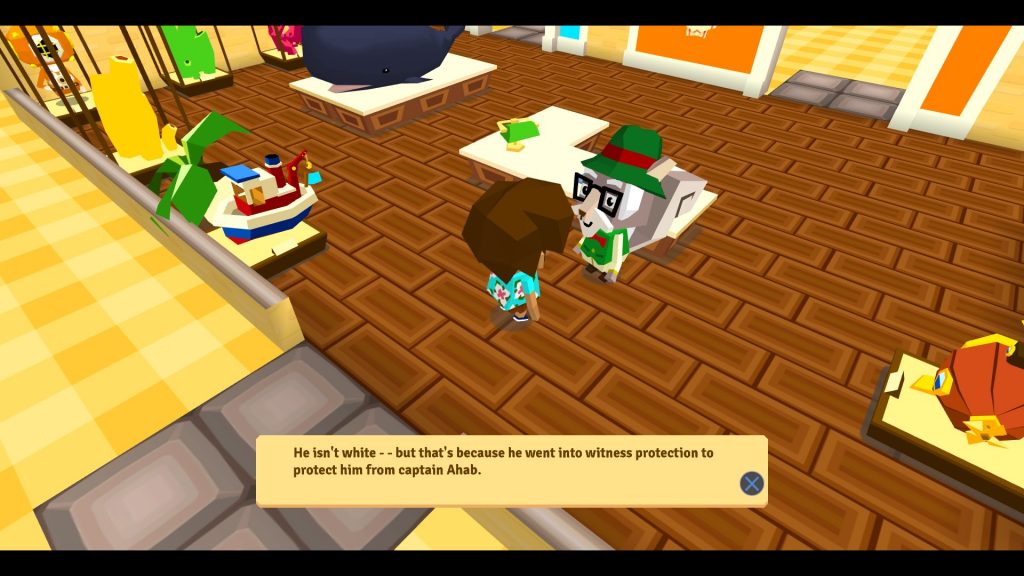 Once you’ve unlocked all gates and rebuilt all buildings that were wrecked during the storm that marooned you on the island, you’ll be as rich as Croesus and able to buy almost anything you need excepting the elusive collectibles anyway. In the endgame your main currency is time itself, you’ll just be waiting for timers to reset so you can harvest cash crops, do dailies and pick up yet more seashells on the shore.

To its credit, Castaway Paradise doesn’t fall into the F2P trap of demanding real money to speed things along, but at the same time it would be handy if you could accelerate things a little rather than having to wait an entire day.

The game is also a little buggy, sometimes the only way to progress in a dialogue option is to kill the game altogether and reload it. Also the tooltips for timers on fruit trees don’t always clear properly, the icon still being visible once the fruit has grown again. 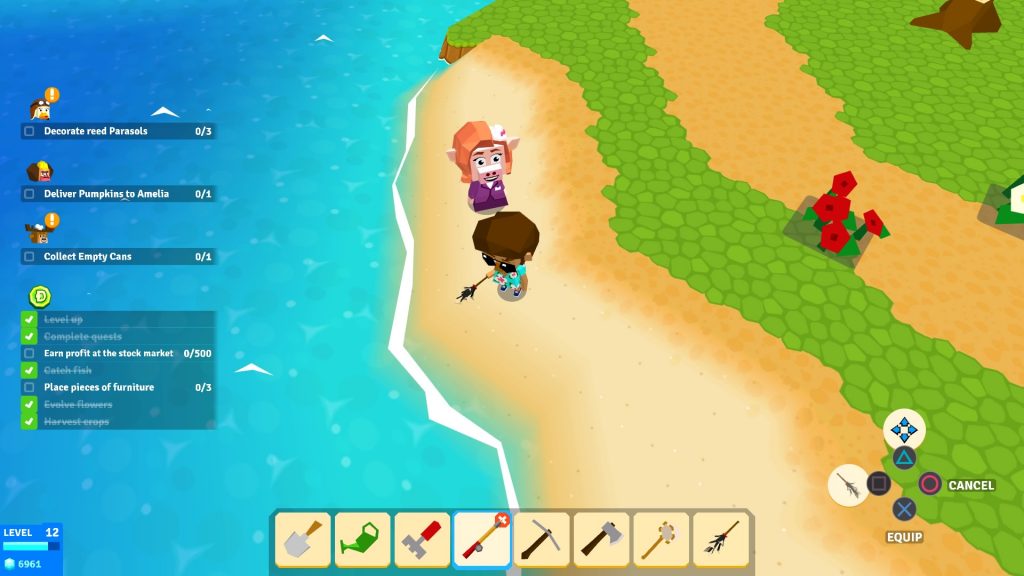 A welcome departure from Animal Crossing is the inventory management. In the early stages of the game you’ll have more items than you have space for, especially before you can access the museum and start donating items. Castaway Paradise does a great job simplifying this for you by shunting excess items into general storage accessible from your TARDIS-like tent. Your tools are kept in a separate toolbox as well so you can easily access them with a tap of

rather than having to juggle inventory items to unequip each in turn.

In conclusion then, Castaway Paradise  is a fine addition to the awkwardly named life simulator genre and the closest you’ll currently get to Animal Crossing on any console of the current generation. An ex-girlfriend of this reviewer called Animal Crossing on Gamecube digital crack, Castaway Paradise is more of the same and you’ll forgive the slightly rough edges for that.

Castaway Paradise
8 Overall
Pros
+ So damn addictive
+ Fun farming and planting mechanics
+ Tools don’t take up inventory slots
+ Clever autofilling storage
Cons
- Occasionally buggy requiring a restart
- Money becomes meaningless after a while
- Some grindy trophies
- No day night cycle, it’s always sunny here
- No villager churn
- Finite and occasionally fussy quests
Summary
As close as you're going to get to Animal Crossing on a non-Nintendo console. Addictive as hell but ultimately it turns into a bit of a grind.