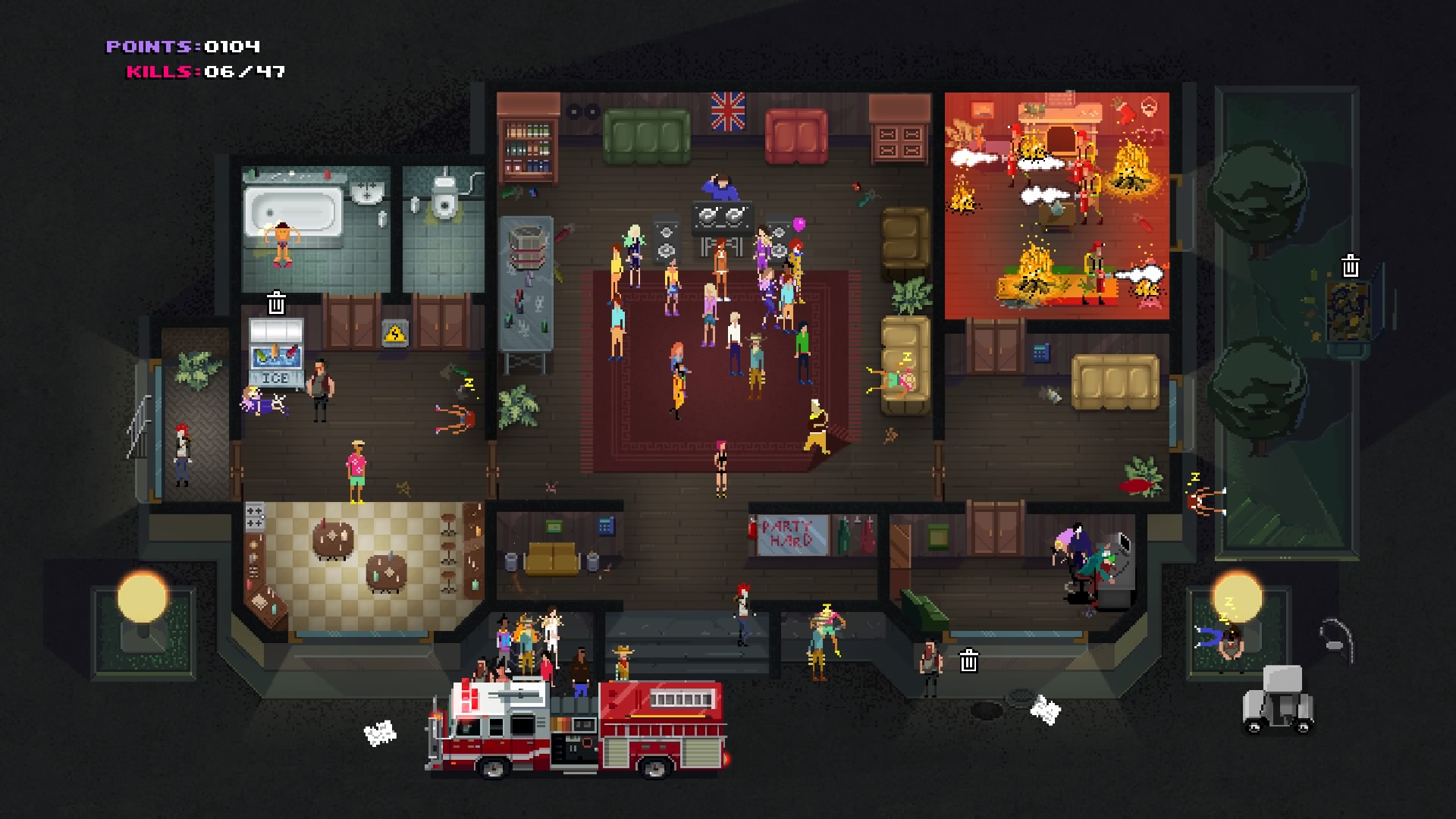 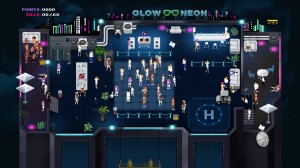 Party Hard speaks to the old bastard within all of us.  You play as a guy who just wants to sleep but is plagued by noisy parties.  Rather than complain, or call the police, he takes things into his own hands and executes every partygoer he can find.  Smart move.

Cutscenes tell a vague story about the failed investigation into the ‘Party Hard Killer’ before putting you in a single screen level.  Each of the game’s ten or so stages is a single screen, seen from above, and is full of people that you need to kill.  They dance in groups or wander off alone.  Killing them is easy.  Walk up.  Press square.  They drop.  However, there are a lot of eyeballs there and if anyone sees you killing, they call the police who will outrun you, beat you unconscious and arrest you.  Just like the real police.

Stealth is key.  Most of the time, people won’t even notice you and so you can wander around and explore the level to see where the best killing opportunities are.  Later levels might have security staff (who will also beat the shit out of you) but, for the most part, they can be avoided or killed with a little planning. 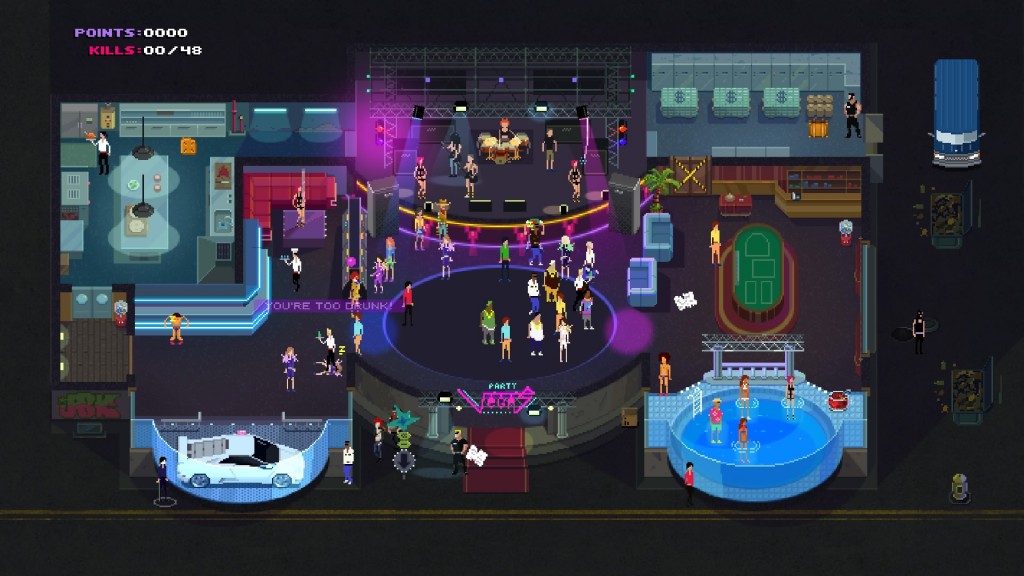 What you need to do is hunt around the edges of the level, killing people and hiding the bodies before anyone realises anything is wrong.  You can also make it look like an accident by setting off traps or pushing folk into fires and whatever.  The levels are slightly randomised though and so you’ll need to figure out the best way to remain undetected.  Additional shortcuts and hiding places assist you but these will be closed off if you use them to escape the law.  The police themselves only have to be avoided for a short while before they become disinterested but repeated visits will make them a lot more tenacious and there’s no fighting them off (although a well-timed trap can kill them but this is quite hard to manage).

Presented in 2D retro graphics (sigh) and with a booming techno soundtrack (sigh), Party Hard doesn’t do much to convince you that indie gaming is sorely lacking in fresh ideas when it comes to presentation.  It looks and feels a lot like Hotline Miami but kind of plays a lot more like the brilliant indie classic Hidden In Plain Sight, which is good and all but just makes us wish that game was on PSN.  Or that Party Hard had a multiplayer mode which, unfortunately, it doesn’t. 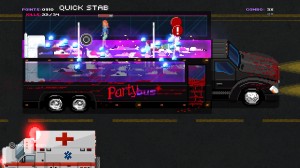 Instead you just have a selection of levels that, for the most part, handle pretty similarly.  Party Hard ends up being a game about patience rather than cunning or stealth.  If you can wait long enough, victims will usually wander over to you and if you’re near a place to hide their bodies, that’s usually enough to clear most of the level.  However, it’s not always that easy and the game can be pretty challenging.  It is fun too but the one-note gameplay never really goes anywhere.  Additional playable characters add some interesting wrinkles to the formula though but, as ever, you’re always best off with the original character anyway (why does this always happen in indie games?!).

Party Hard is decent but the party is over all too quickly.  The story is just about worth following and as a simple murder ’em up, the game has its moments.  But not many.  A sequel with a heap of multiplayer modes could be the party game of the year though.

Party Hard
6 Overall
Pros
+ It's fun + It reminds us of Hidden In Plain Sight + Soundtrack is okay + Quite nice in a stealthy kind of way
Cons
- Not much gameplay on offer - Sorely missing some multiplayer larks - 2D retro graphics (as per every indie game recently)
Summary
A fun little stealth/murder 'em up that misses some big opportunities. It's a good game but it could have done so much more.