From Lowtek Games and Ratalaika comes Parasite Pack. As the name might suggest, this is a couple of smaller games that being thematically similar, made sense to release together. The two games in question are Flea and Tapeworm Disco Puzzle.

Flea was originally coded in the Nesmaker game engine with looks that very much ape Nintendo’s venerable console. The titular parasite can’t help but jump everywhere they go, collecting blood blobs as they traverse the levels of varying complexity. The bag of the fag packet summary would simply be a NES styled take on Super Meat Boy and N+. It’s a fair comparison to make as Flea can’t help but frustrate and delight in equal measure. 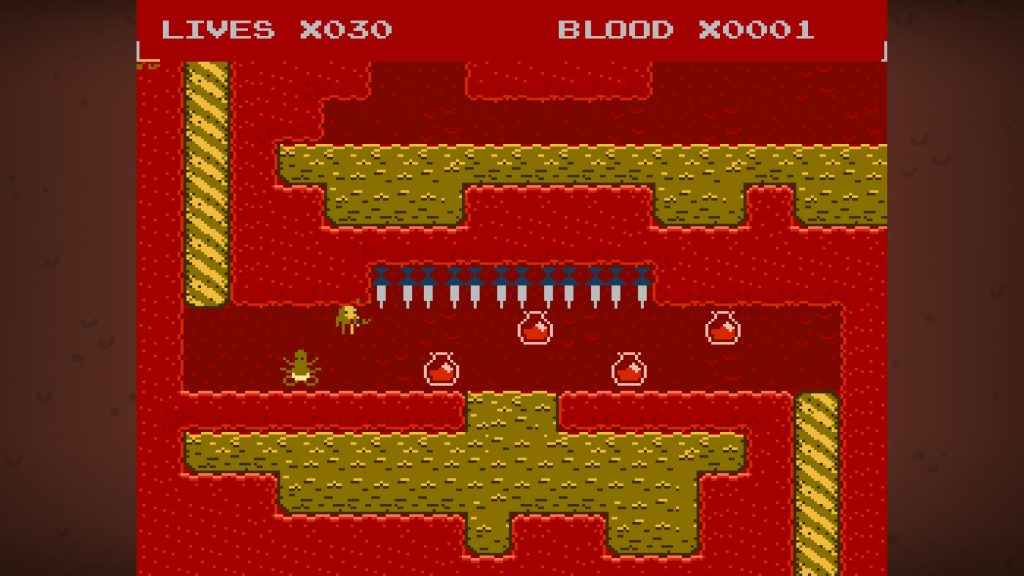 The blood blobs you collect are quite literally your own lifeblood as periodically you’ll exchange them for extra lives in sub-levels between each stage. Though due to the way that Flea and TDP, implement their save systems, you save snapshots of the exact moment you pause the game. This makes having lives of any sort almost an irrelevance, as there’s nothing to stop you reloading a save state.

The save states also help with a bugbear that often affects this sort of game. Rather than checkpoints through the levels like in Duck Souls+, if you wind your way through a level, you can mess up at the end. Then you’re bounced back to the start of the level. Or in the case of the more exacting levels, you can reload a save state just before the tricky part of the level. This stops you having to retread over and over at least. 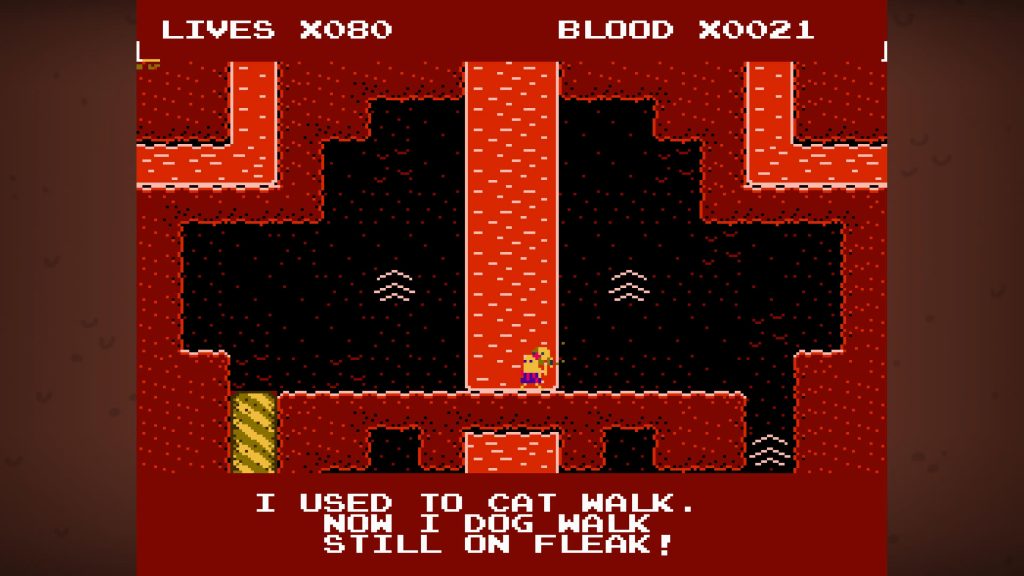 Flea‘s gameplay does relegate it to the lesser of the two games on offer here, partly due to the fact that it’s a hardcore misery platformer. Though perhaps we’re not the target audience here. We prefer Tapeworm Disco Puzzle as it’s a little more cerebral. Though the ‘boss’ levels, such as they are, turn both Flea and its newer sibling into effectively endless runners. We found using the save state function broke down the Flea boss levels nicely enough, thus avoiding having to redo the opening part of the levels over and again. 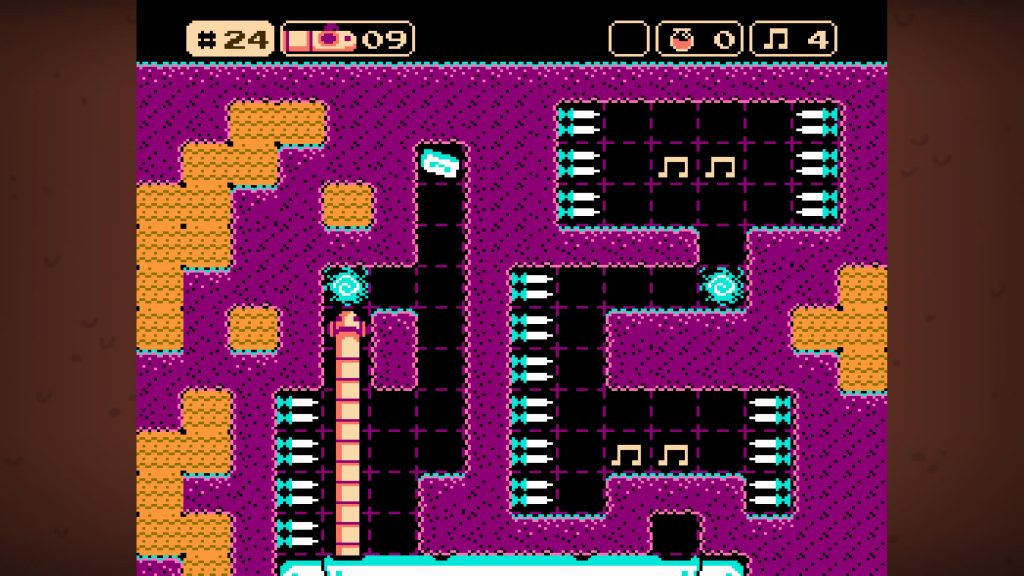 Tapeworm Disco Puzzle then. It’s based in the same Flea game world. Somewhat bafflingly, yer man Tapeworm owns a nightclub. No, we don’t understand either. Practically this means you’re collecting musical notes across a series of levels. This is very much done at your own pace, making for a much more relaxed approach being possible. Occasionally you’ll have levels that need quick timing, but they are thankfully infrequent. 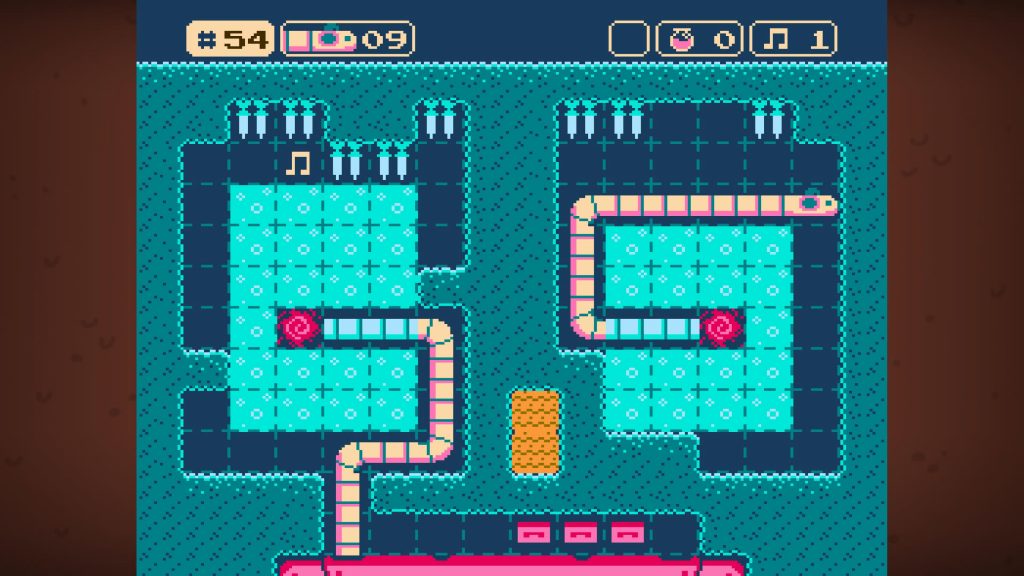 Your tapeworm can also act as a stepladder to help your flea pals out. It makes sense when you play it, difficult though it is to describe in a few words. As you progress you’ll unlock the ability to make your tapeworm longer. This is handy for the most part, though on the ice levels you’ll have to be careful you don’t overextend into the ever-present spikes of death.

We mentioned the boss levels, they’re more challenge levels than anything as you’ll never actually be engaged in direct conflict. In Tapeworm you’ll instead have to navigate a labyrinth, picking up all the musical notes as you do so. This plays a bit like the classic Nokia timewaster, only with a little more jeopardy. Hit a wall, you die. Hit one of Flea’s blood bubbles, you die. Hit a spike, well, you get the picture. 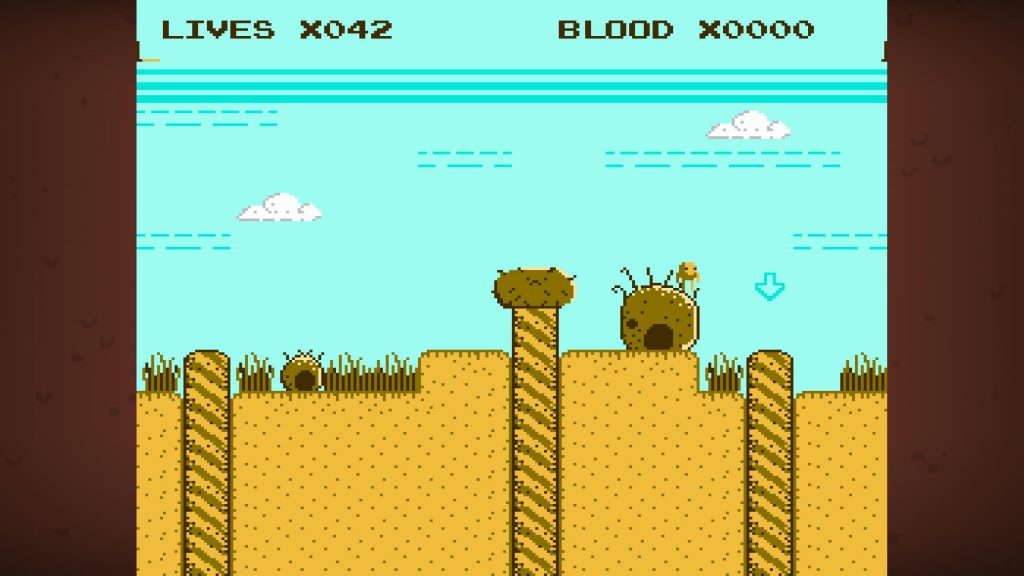 In conclusion, Parasite Pack is a nice little distraction with a distinct retro style. As is the norm for Ratalaika games, you get the PS4 and PS5 versions into the bargain. It isn’t the deepest game around, but that’s no bad thing. As is often the case, this would’ve worked just as well on Vita.

Cons
- Flea is an unforgiving mistress
- Some levels prove frustrating in both Flea and Tapeworm
- The challenge levels are jarring with regards change of pace
Summary
Parasite Pack is a nice bite-sized retro styled double pack with a NES take on what Super Meat Boy might've been had it released twenty years earlier and a fun puzzle game that proves to be the more relaxing of the two. A fair value proposition with PS4 and PS5 crossbuy. It's alright, just nothing revolutionary. A fun little timewaster.