Indie platformers are a dime a dozen and it can be hard to sort the diamonds from the rough. Especially if they don’t initially appear to stand out visually or heavily lean on a gameplay hook. Still, I enjoy a good one and Guin Entertainment’s hoping to provide with Adventures of Chris, a 90’s inspired platformer that takes cues from some genre luminaries whilst showcasing some of it’s own character and tricks. 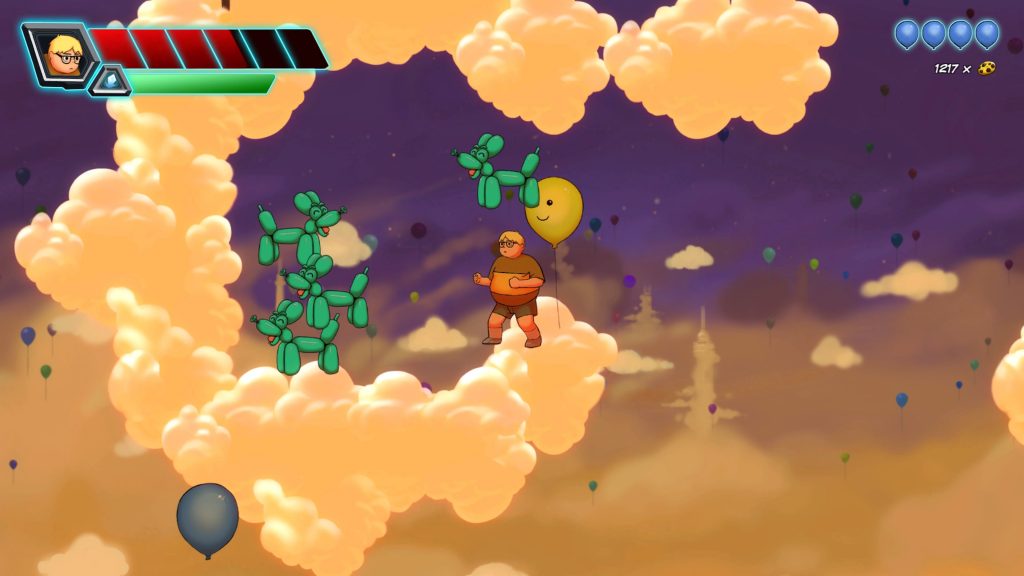 Chris is from Alabama and, being a hefty kid, he doesn’t make many friends at school. The game starts with our hero making his way home when he’s teleported to Transylvania by an unknown force. Some of his schoolmates are there, captured and transformed by an irritating kid vampire. From then on, Chris’ role becomes rescuer as he looks to find and turn the other children back to normal. He himself is turned into a balloon and floats his way to The Kingdom of Lost Balloons. There he can bring the found children back and learn the ways of balloon combat.

It’s a silly premise but the writing manages to sell it well. It’s firmly tongue in cheek and, whilst Chris begins as the butt of some jokes, there is a personal journey as he gets to know the other students better. There’s good interplay without, to be honest. Adventures of Chris runs the risk of laying on the jokes heavily but the tone and the measure of it seems to largely work. It’s charming and doesn’t take itself too seriously.

As a game, Adventures of Chris takes plenty of inspiration from the likes of Megaman and Metroid. There’s some responsive platforming on display with plenty of abilities for Chris to unlock. Some of them play up his portly stature and his first ability grants him the opportunity to inflate at will. This allows him to float above obstacles and, providing he’s got the helium to do so, he can re-inflate when required. It supplements his meagre jump well and leads to some levels taking full advantage of verticality. 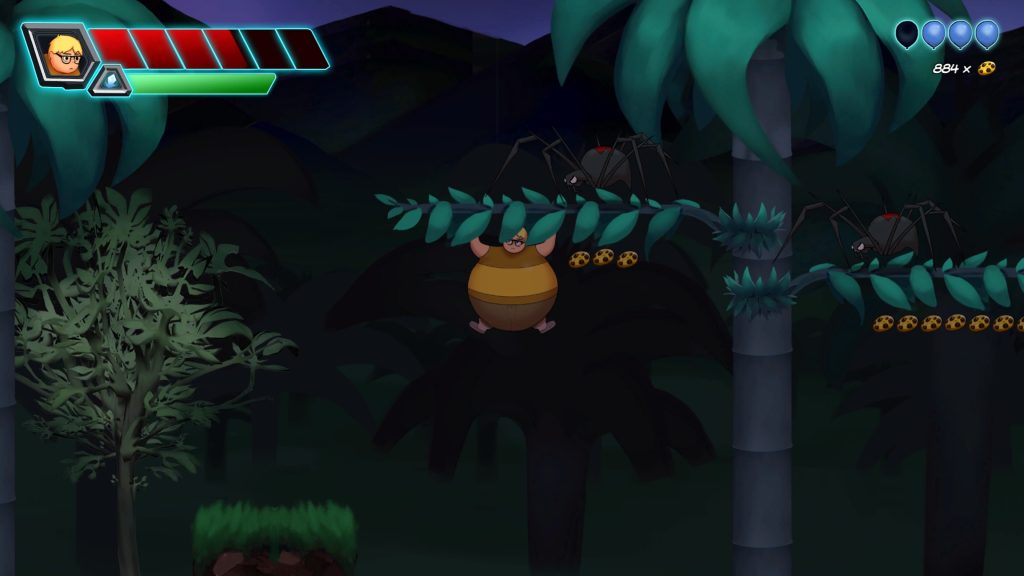 Offensively, he has a basic punch which can be upgraded with fire and crystal variants. Later, these can be charged, although I tended not to use it. Attacks tend to come out as quick as you can hit the button and I didn’t feel bosses gave the luxury to stand still long enough. That aside, I found uses for most of the other abilities. They’re usually uncovered in the levels where you’ll need them the most, with tutorials on hand to make sure you understand how to use them.

There’s nine countries to fight your way through and Chris can tackle them in any order. Some of them are also optional. It gives you plenty of flexibility and his ability to float does provide an easy exit if you happen to run into a roadblock. Depending on which order you tackle them in, you can find some of them fairly trivial whilst others become a challenge. Each level has well-placed checkpoints that can help you break them down into manageable chunks. I never felt like death was much of a penalty.

The shops also allow for some variability. In the balloon kingdom, there’s a tailor and a baker on hand to give Chris more resilience. Here you can upgrade the amount of helium and magic Chris has, on top of how much damage he can take. These can certainly lighten the load and they’re payable by cookies which you’ll spend the whole game collecting. I didn’t find these upgrades too time consuming to acquire, although the tailor’s best shirts can be pretty pricey. 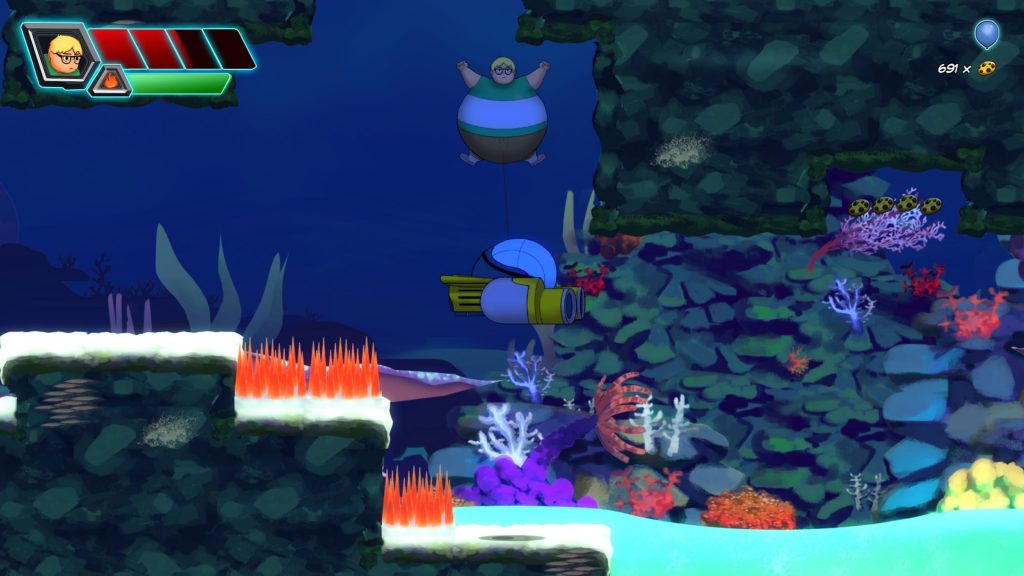 The attitude to challenge is an interesting one. I found only bosses posed me a serious threat with most of the levels being fairly forgiving. This pivots a little bit when heading into the home stretch. Once the map is cleared and the children are rescued, you head into an endgame which can feel a little overwhelming. Boss are designed well enough with fairly obvious patterns to recognise. The problems arise when the game decides to throw two bosses at once. Whilst it’s not quite a boss rush, these moments give me too much to do and it can be jarring to see the difficulty spike so suddenly.

To the game’s credit, you can switch difficulties at any time. There’s four to begin with and completion of the game does unlock additional modes. I found myself dropping down a peg when things got tough only to pop back up when I felt the game was being too easy. It’s nice to see a game so flexible but I still feel the final chapters are unbalanced. Even beyond the bosses, you’re given the game’s toughest platforming challenges and it can become exhausting so close to the end.

Presentation is surprisingly decent. At first glance, the game looks like something you’d see on Newgrounds but there’s a lot more competency on display. I’ve mentioned the cheeky humour which does paint the game with a lot of personality. Each level has it’s own aesthetic and enemies which really help make them feel distinct. The bosses don’t feel out of place with a cigar-chomping smog monster fittingly ruling Los Angeles. There’s a lot of ideas on display and it does mostly feel coherent, if not especially fancy. 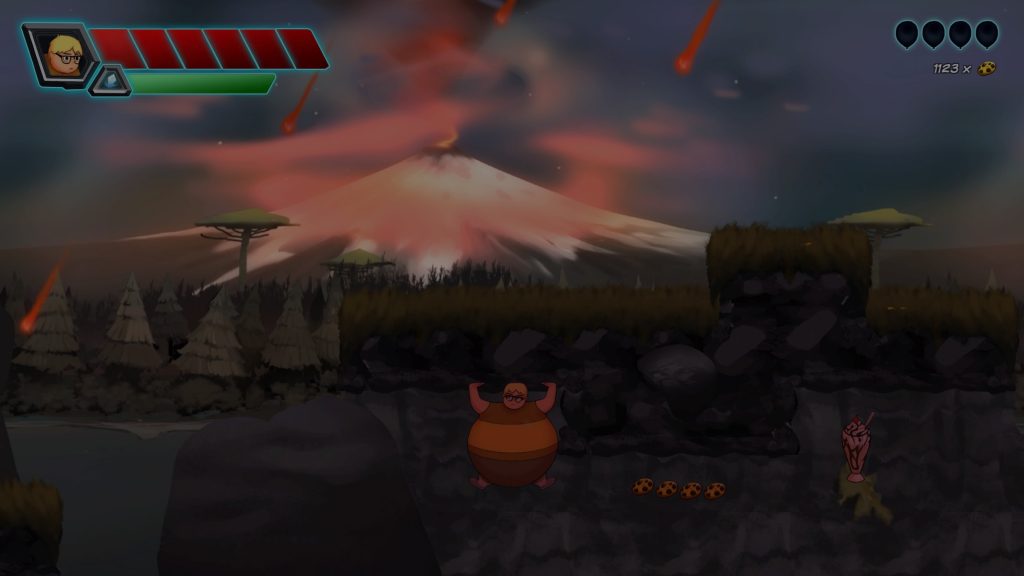 Musically, the swelling orchestration gives the soundtrack a larger than life feel. It really sells the sense of adventure Chris is on and the score takes on a superhero motif that makes the daft premise feel rather grand. There’s some good touches with the sound effects. Deflating comes with a sputtering fart noise and being untimely popped is sudden and looks nicely comical.

Despite the budget appearance, there’s a lot of good ideas on display in Adventures of Chris. Whilst the challenge does sharply rise in the final stretch, there’s plenty of flexibility on offer in how to tackle the game’s stages. Platforming and combat feels responsive and, at times, it can be forgiving. It’s a shame it can become overbearing as the writing shows plenty of personality and charm.

Adventures of Chris
8 Overall
Pros
+ Charming, cheeky writing.
+ Surprisingly deep and rewarding platforming.
+ Offers a very flexible approach.
+ Bombastic soundtrack.
Cons
- Comes with a late, sudden difficulty spike.
- Visually looks fairly basic.
- Some of the best upgrades require a grind to gain.
Summary
It's nice to be pleasantly surprised by something and Adventures of Chris managed to defy my expectations. Beneath the somewhat cheap look, there's some depth and neat touches that helps deliver a flexible and interesting experience. It's a pity the difficulty takes a sharp rise and might cause some players to fall off. There's a very warm and pleasant story on offer that doesn't take itself too seriously. This is definitely something worth your time.