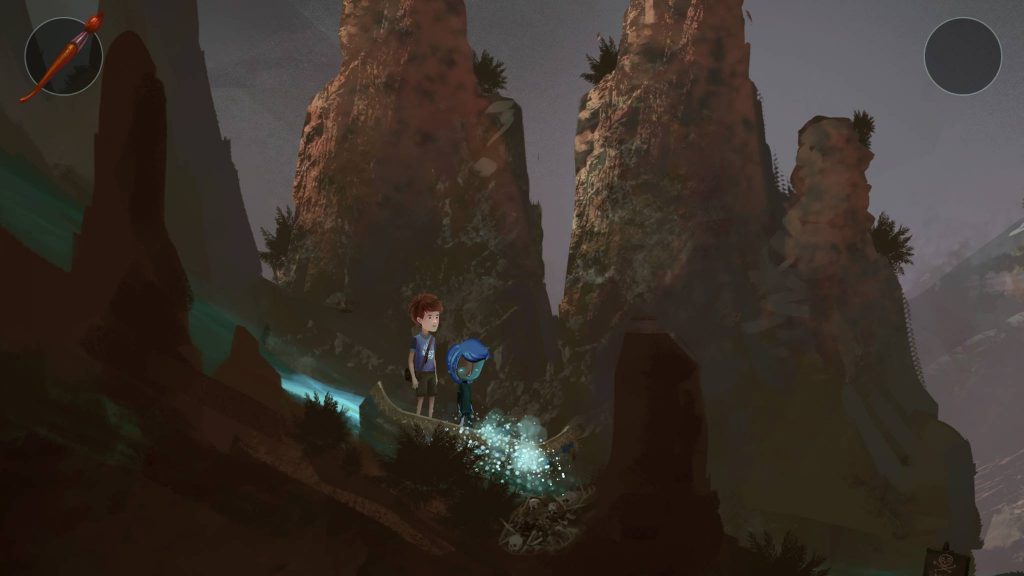 There has long been a debate as to whether the video game medium can be considered art. There are certainly a lot of games out there that could be considered artistic and when the Indie development scene isn’t working on another ‘2D platformer with pixel in the name™,’ there is generally going to be several titles that utilise various artistic aesthetics in the works also. Bringing a level of validation to the argument is a studio called Gammera Nest, who have been working in collaboration with the National Musem Thyssen-Bornemisza of Modern Art of Spain on a series called Nubla, which uses various painting styles and exhibits as the aesthetic style of the game and the framework for the in-game world.

This all sounds quite neat, and certainly a positive move for the pro-art side. The problem however, is that beyond Nubla 2’s great appearance and surrealistic subject matter, the game underneath it all falls for some of the strangest and unfortunate gameplay tropes that either feel like they shouldn’t have been included or like they are an afterthought to try and pad some gametime into the proceedings. 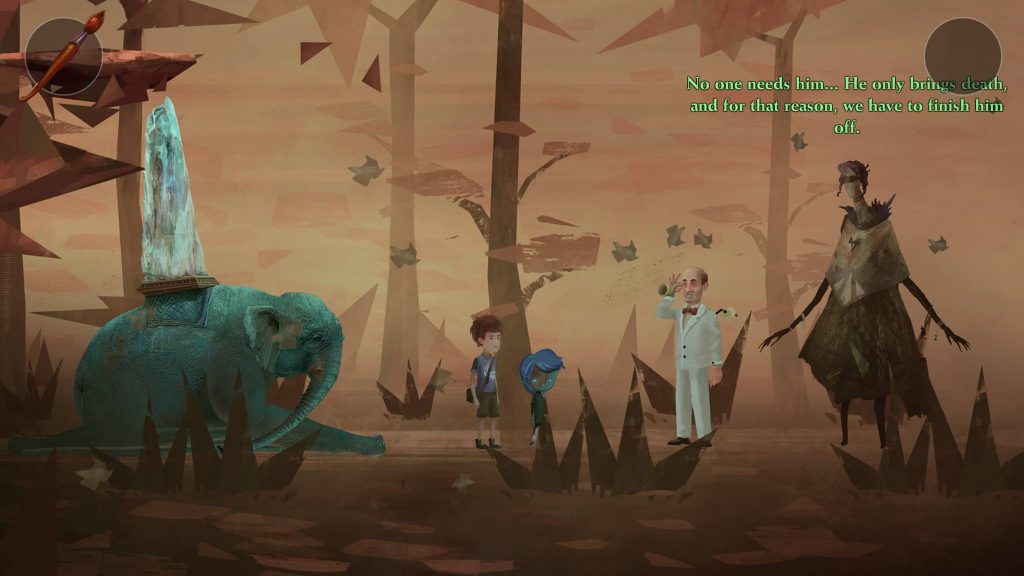 Nubla 2 starts out innocently enough, you play as start off as an Ism, a young character that represents an artistic style (think cubism/ surrealism.) There are five of these characters to play with and each have a special ability that they can utilise to traverse the game world. For example, one can become invisible, making hidden platforms visible, another can shrink his size, allowing him to crawl through small openings. The Ism I picked, Blua seemed to be the most useful as she is capable of levitation, something that becomes inherently important to the progression of the game as Nubla 2 is a puzzle platformer. This is where things get annoying and it is prevalent from the opening moments of the game, just about every jump I encountered in Nubla 2 was an incredibly tight and punishing endeavour. This is down to both the aesthetic style not being the greatest signpost for platform boundaries and the utterly abysmal checkpoint system.

If you die in Nubla 2 and haven’t reached a recent checkpoint, then you lose ALL progress between the time you unlocked it and the time you died. The game itself is rather slow and the checkpoints are few and far between. If you fall victim to a mistimed jump then you must go back and read through all the dialogue you have been through, pick up all the items that you have found again and navigate the same dull obstacles that laid before you before. In some cases that could be around twenty minutes worth of content, while that may seem like standard gaming penance to the hardcore, we need to also consider that without the platforming the game is rather pedestrian and feels more like a 2D walking simulator with puzzles. 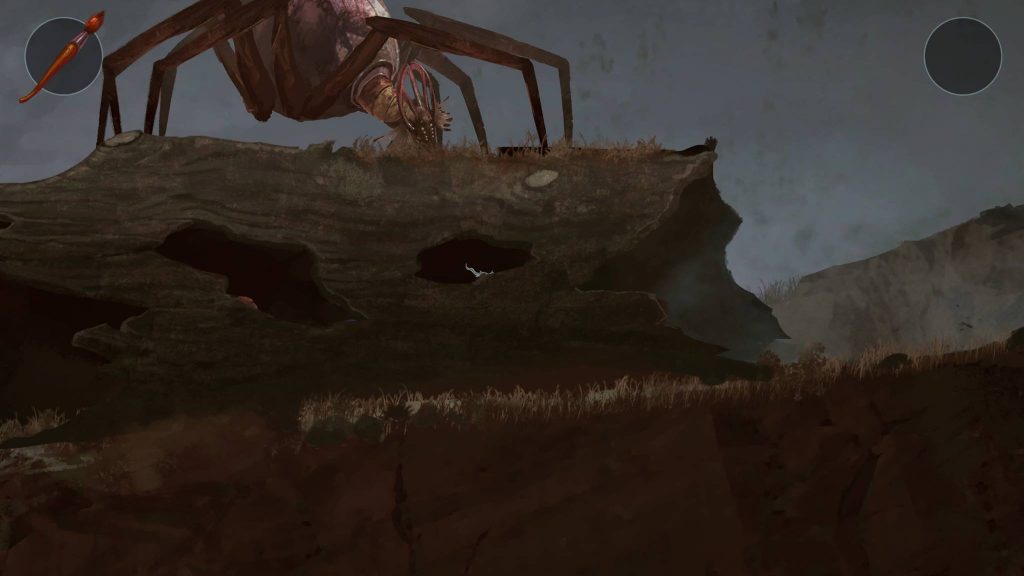 The main problem as I see it is within the control scheme for the game. You control both your chosen Ism and Illa, a human character that has the ability to paint objects into existence. The ism is controlled using the right stick and right face buttons/ shoulders, while Illa is controlled using the left stick and dpad. Jumping is governed by a pull of the trigger, which feels incredibly unnatural. What makes this a baffling design choice is that it is never really justified within the game’s progression. The only major difference between Illa and the ism is that Illa is unable to double jump, and there are very few occasions where your characters need to separate to operate machines or work cooperatively. So, I do not understand why the developers could not have coded a command system, one in which you could tell Illa to stand in a spot or send the ism up a ladder to pull a switch. This would have made for a more intuitive and less frustrating experience I feel. After all is considered, the platforming is so detrimental to my enjoyment of the game that I often felt that a 2D walking sim would have been a better fate for the game as the story and aesthetics are generally decent.

Nubla 2’s narrative is based around a storm that is sweeping through the various lands, destroying the various creations of painters and the people and towns that have been crafted by their imaginations. Both the ism characters and Illa need to find the source of the storm and find a way to put a stop to it. The game takes you through various locales, from beaches, to lush vector forests and even into the land of dreams, which is filled with a ton of surrealistic imagery which thematically is superb and looks great. The puzzles that adorn these areas also help to bring context to the proceedings. Although, one of the most painful aspects is that certain areas are underutilised in favour of less interesting sections. For example, I loved the surrealistic landscape of the dream world, however it feels so short and is a footnote compared to the latter city area which just feels drawn out and dull compared. 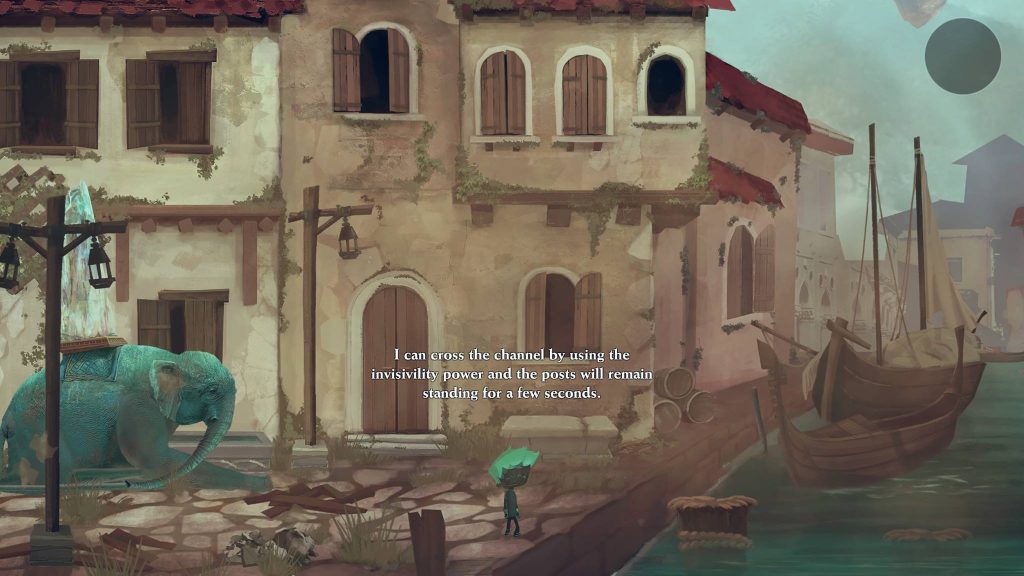 Beyond the gameplay, there is a lot to be said around the polish of the final product. Nubla 2 has some of the biggest oversights I have seen in a game and not just in the case of typical glitches or bugs (which are still very much prevalent.) My main gripe in this area is in the dialogue and text. I don’t want to call this out too much as this is likely the result of translations and it is clear that the developers do not use English as their first language, but the game is filled with spelling errors, some of which you will see in the screenshots. There are also sometimes cases in which you characters can get stuck in the floor, fall through space and make you have to restart the game from a checkpoint (something you absolutely don’t want to do for aforementioned reasons)

The idea of a modern art museum getting involved in gaming is fantastic news for those that support the narrative that gaming is art. However, Nubla 2 as a gameplay experience can in no way be considered artistic. It is a real shame as the story and aesthetics are neat, however the platforming, the dull sections and incredibly poor finishing pulls the rest of the experience down considerably. The only saving grace beyond this, is that the game can be completed within two hours, which is both a mercy and a blessing for platinum trophy hunters.

Nubla 2
4 Overall
Pros
+ Doesn’t fall into the trap of purely making the art an aesthetic choice only
+ The storyline is caked in surrealism, which is good
+ Thankfully short
Cons
- Abysmal checkpointing, you often must retread ground
- The platforming sections are needless and punishing if you slip up
- Incredibly slow paced, if the characters were sped up, this game would take less than an hour to complete
- No spellchecker was used in the creation of this game
Summary
Nubla 2 may have been the result of a collaboration between a game developer and modern art museum, but the gameplay is anything but artistic. Wonderful aesthetics and an engaging narrative aside, Nubla 2 is a short and frustrating adventure, thanks in no small part to poor platforming mechanics and snail-like pacing.