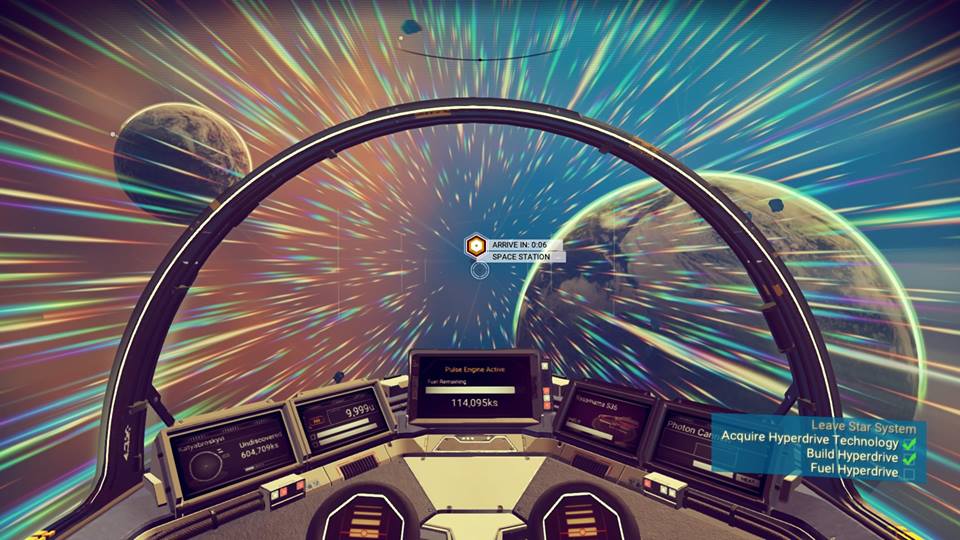 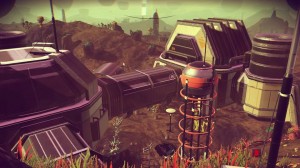 No Man’s Sky was always going to be a case of expectation versus reality. If you have been following for the three or so years since the title first showed its face at the VGX awards, you would probably have been asking yourself whether or not Hello Games could actually pull it off. This grand concept of a daunting amount of planets that no one person could explore, filled with intrigue, discoveries and countless alien species all in a bid to race to the centre of the universe. All handled by a frankly skeletal team in Guildford. I couldn’t help but feel daunted for the team, after the amazing response from the instant fans it created had hit fever pitch, it was pretty difficult to see how they could ever deliver.

The first moments in No Man’s Sky for me were plagued by these constant thoughts. As my character awakes next to a smoking ship, stranded on a planet which appeared to be populated by wobbly pineapple like blobby beings. Immediately tasked with fixing up my downed vessel, I got to work mining away at materials and crafting my way towards getting the hell out of there. This quest thrust me onto my temporary green home, tip-toeing through lush fields as I encounter other life-forms exchanging baffling conversation (as I haven’t learnt their language yet). All in all I was fairly lucky as pretty much everything I needed was within five minutes walking distance from my ship. As soon as my launch thrusters were functional, I was off the planet and jetting towards my next destination which I would later dub as Grizztopia. The flight of my ship was exhilarating at first with easy to understand controls and tight movement, not something that has been prevalent with space sims recently. The only shame with this is that close to a planet you essentially have an invisible floor that you cannot fly under so you can’t fly in between canyons or try your luck by flying through hoops in terrain, otherwise flying through space is great fun, especially when the 65 Days of Static soundtrack kicks in to flesh out the wonder. 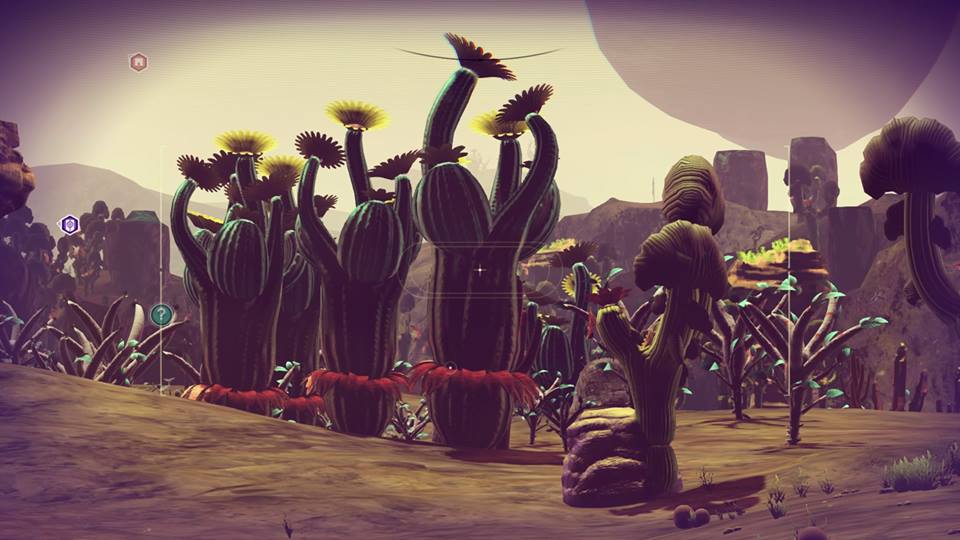 At first I thought Hello Games had done it. The initial couple of hours were fantastic, trying to take everything in. But what I didn’t realise at the time but this would be all I would be doing for the next twenty or so hours that would follow. See, No Man’s Sky is a game with a lot of beginnings but with little to no follow through. In just about every feature or discovery there is that spark of a ‘what if?’ moment. Such as when I discovered an abandoned domicile which was covered in slime thanks to an errant species that had consumed it’s prey, leaving behind a mangled pile of goo. You find a lot of these on various planets so it made me wonder if there was a narrative forming, that one day I would discover a home world for the species and potentially have to eradicate enough of its existence to make a difference. But no, it just turned out to be another building on another planet that had a thing that was part of a massive breadcrumb trail to the next building or question marked randomly generated discovery.

This cycle sets in far too quickly and is also the games biggest disappointment. Beyond the pleasing overall aesthetic and the initial thoughts of possibilities there is little to No Man’s Sky. You set down on a planet, mine some materials to craft a warp battery and then warp to the next system. Which then has some more planets in which you can do the same and then you get the idea. Every now and then there are odd occurrences, including space anomalies and cargo ships to protect against space pirates, but these do little to break the sense that you have seen and done it all before after the third galaxy.

Another feature that inspires wonder when you first get it is the scanner which you can craft for your multitool. This allows you to zoom In on life forms and foliage so you can identify and name the creatures. At first this seems amazing, that you are taking ownership of entire species of aliens and then calling them raging cockbeasts and winged wallopers. But again, the only thing that this leads to is disappointment as ultimately these discoveries mean nothing. Let me remind you that No Man’s Sky is a game about discovering things for the most part. But barring the mini encyclopedia you contribute to as you play, there is no way to essentially keep anything you find. Unless you are going for trophies there is little reason to stay on any planet you find, as the goal is to constantly move towards the centre of the galaxy. You cannot leave any meaningful marks on the worlds you do find, meaning that if you go into space again then you are very unlikely to be able to find the same area you had found before. An issue I encountered when my ship unexpectedly catapulted into the stratosphere when I was simply on a hunt for heridium to fix a downed ship, losing my effort and progress behind in an instant. 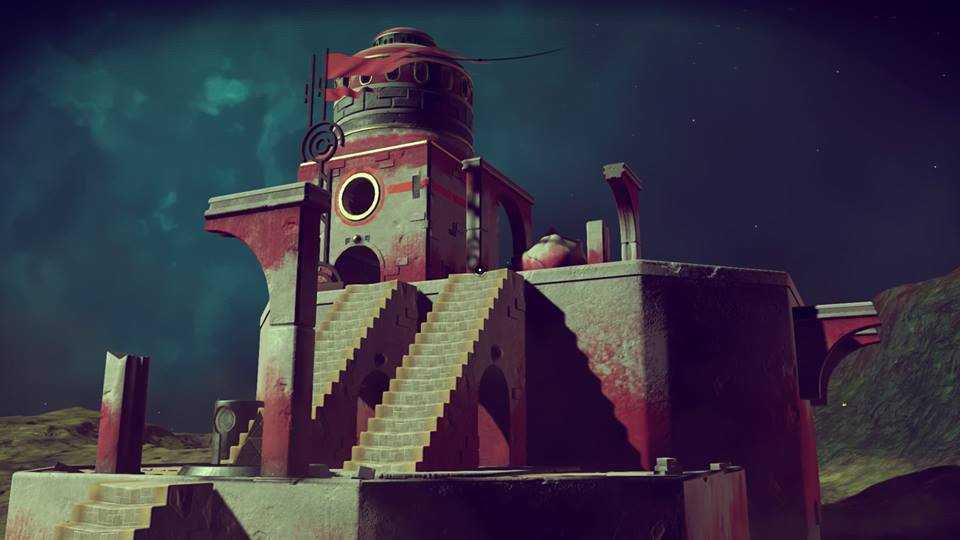 Most of all, what is weird is that you are reminded constantly by marketing that you are some spacefaring explorer, going around discovering these new planets for yourself and carving your own ownership trail through the universe. However, every planet you land on has an outpost of some description with intelligent life who have appear to have been there for some time. It makes me feel the complete opposite of how I should, that if anything I am just simply claiming something that isn’t mine. That’s no fun.

The planets themselves are all procedurally generated, like all of the other aspects of the game. But this generally balances out to little more than slight aesthetic changes, weather cycles and native toxicity level. This can make some planets interesting at first before the cycle sets in, but it can also make some systems incredibly harsh to wander about on. Luckily, you can upgrade your exosuit and multitool abilities to make this a bit more palatable to your exploration. However, this leads on to the biggest bugbear of them all. Inventory space is very limited and these upgrades take up space in your inventory. You start the game with around twelve slots which are free to use as you please but after around ten minutes of mining you will soon find that these slots fill up and you are constantly being flashed with a message stating that your inventory is full. This is another area which you can upgrade over time, but at the start of the game when you need resources the mode it becomes a constant hindrance to the game and your dreams of getting anywhere fast. 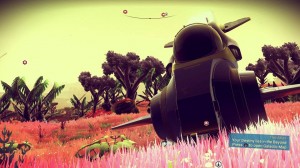 No Man’s Sky has potential. A lot of it in fact. The only problem here is that it has not been realised yet and this will be an annoyance to a lot of people. Hello Games have stated that they will be increasing the content load in the future however as it stands the game just simply does not have enough to keep those first two hours of wonder alive. For a game that could be played over generations, I find it amazing that it outstays its welcome so early. This needs to be fixed and soon.

No Man's Sky
6 Overall
Pros
+ At times beautiful to look at + Amazing sense of wonder as you take your first steps + Those 'what if?' moments could be fleshed out in the future through content updates + Somewhat addictive, despite the shortcomings
Cons
- At times very ugly to look at - Discoveries mean nothing once you leave the planet you are on - Constantly repeating cycle with little variance
Summary
As beautiful, ambitious and clever as No Man's Sky is, there's just no real game here. At worst, it's a walking simulator in space but that initial feeling of wonder is powerful and putting the game down is nearly impossible. No Man's Sky may be the most enjoyable tech demo ever.
We use cookies on our website to give you the most relevant experience by remembering your preferences and repeat visits. By clicking “Accept”, you consent to the use of ALL the cookies.
Cookie settingsACCEPTREJECT
Manage consent