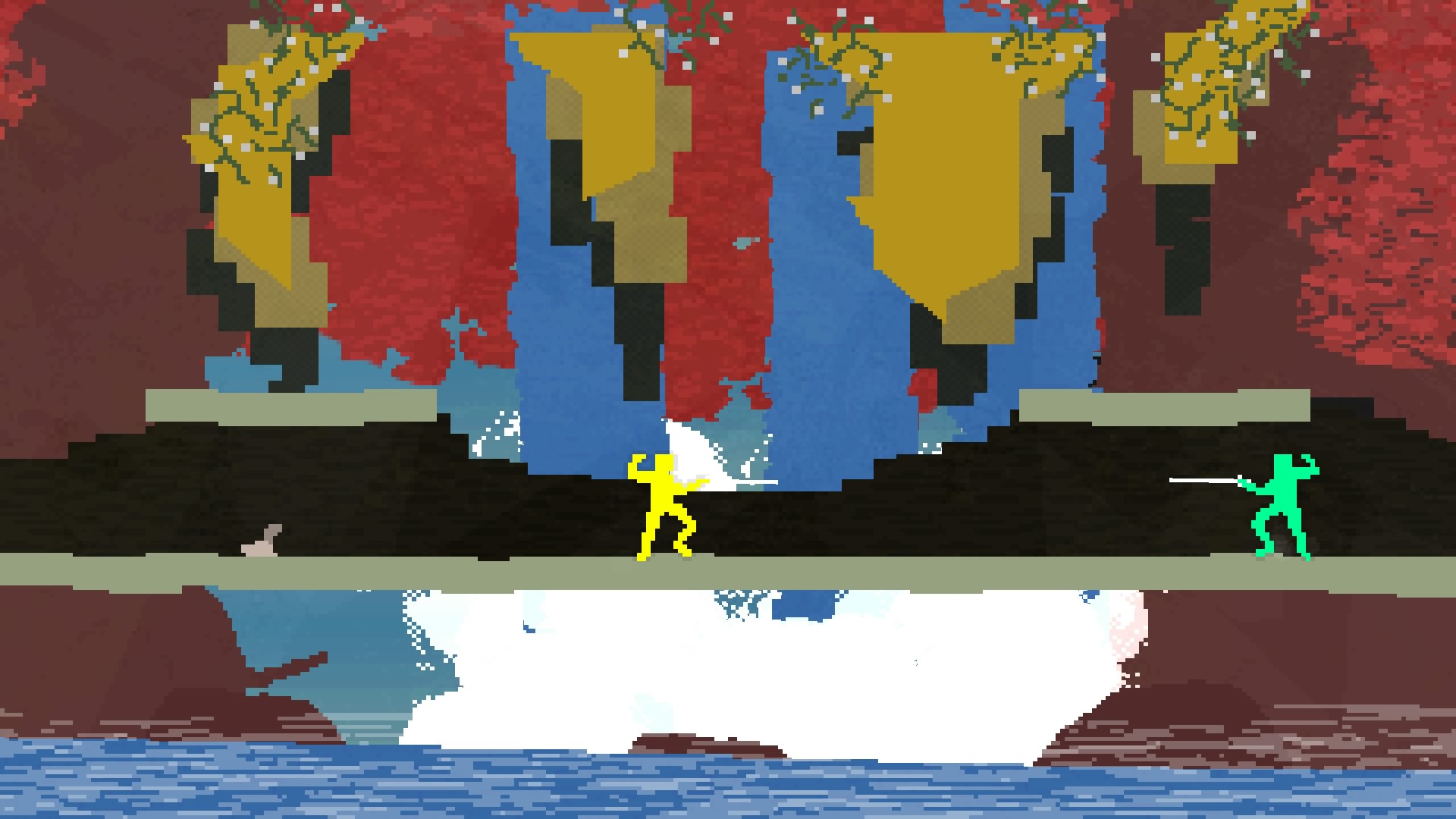 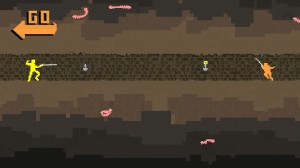 Nidhogg is a PS4/Vita port of one of the most celebrated PC indie efforts of the last few years and is a sword fighting game that sees players competing one on one in fluid, stylised fencing battles but rather than the usual Soul Calibur type epic clashes.

Players start in the middle of a series of linked screens.  Your objective is to strike down your opponent which then allows you to progress forward to the next screen.  Downed players do respawn quite quickly though and so progress isn’t quite as straight forward as simply winning once but when you’ve got the advantage, you can also roll or jump past your opponent rather than engaging.

Matches become back and forth affairs until one of you makes it to the end to claim their prize.  It’s an odd one.  The winner gets eaten by a giant worm, the titular Nidhogg.  We can’t explain that one but it’s all part of the game’s eccentric charm.

The star here is the combat.  There are just a few controls but these allow you to strike, lunge, parry, disarm, punch, dive kick and throw your sword.  When you get used to the timing and usage of these moves, you’ll start linking them into swift combination.  Each battle can be ended in one strike or after a series of elegant movements as players aim to outfox each other and at their best, the battles are as exciting and satisfying as any fighting game we’ve played since Way of the Exploding Fist. 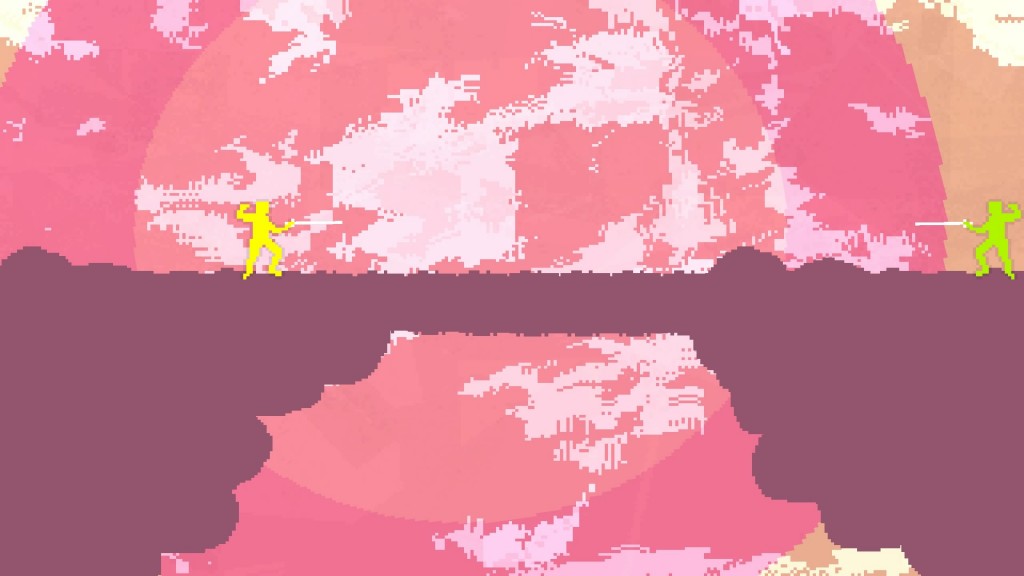 One of the most striking aspects of the game is the presentation.  It’s unashamedly rooted in retro with simple bold graphics that look like they’d belong on an upgraded old Atari console.  It may or may not be to your taste but the animation sets it apart with its slick Prince of Persia style movement.  We liked the look of the game.  It’s very bold and garish but deliberately so, which gives the game a unique look all of its own.

Also, good Lord.  That music.  We tried explaining it yesterday and you can’t.  It’s a sort of drum and bass/jazz beat with the sounds of the world ending kind of combo.  It’s so good.  SO GOOD. 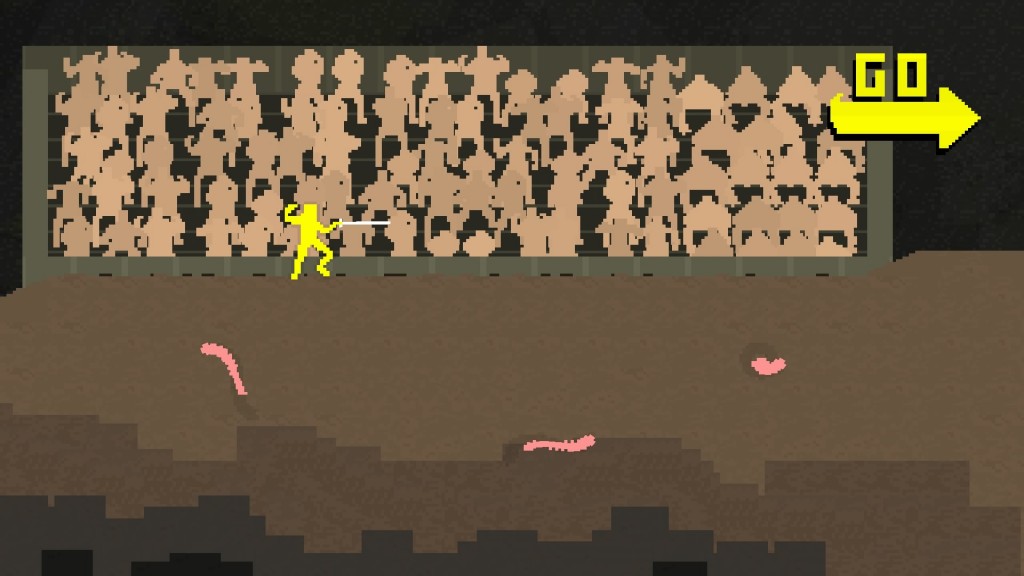 Nidhogg has a single player mode (a series of battles with a ‘time attack’ focus to it) but that’s really just an accompaniment to the multiplayer which is what this game is built on.  There are local and offline options with modifiers that affect aspects of the game (low gravity, sword throwing combat only, boomerang swords – that sort of thing) but beyond that there’s not much in the way of content.

There’s no choice of players or anything like that because Nidhogg keeps its combat pure but also there isn’t really anything to do beyond play matches either with or without human competition.  A story mode with a bit of an adventure and a few types of enemy would have added some depth but what the game does it does well.

It may not be for everyone but if you get into Nidhogg, you’ll love it.  It maybe works better as a party game than a single player experience but the slick combat and excellent music are worth checking out. 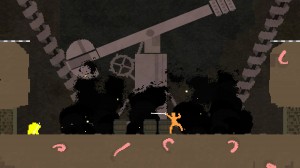 The game is a Cross-buy title for PS4 and PS Vita.  It works well on both formats but the bigger visuals of the PS4 make it a little more enjoyable to play on that format.

Nidhogg
6 Overall
Pros
+ Slick, enjoyable combat that rewards skill and tactical thinking. + Nice retro presentation with excellent animation + Easy to get into + Very good at gaming parties + Brilliant soundtrack + Online gameplay is fast and responsive
Cons
- Lacks content. - Is primarily a multiplayer game so it's longevity will be based on how popular it is online.
Summary
Nidhogg in the right setting is excellent. Fire it up with friends in the room and it is guaranteed larks. However, the lack of variation rules out any single-player appeal.