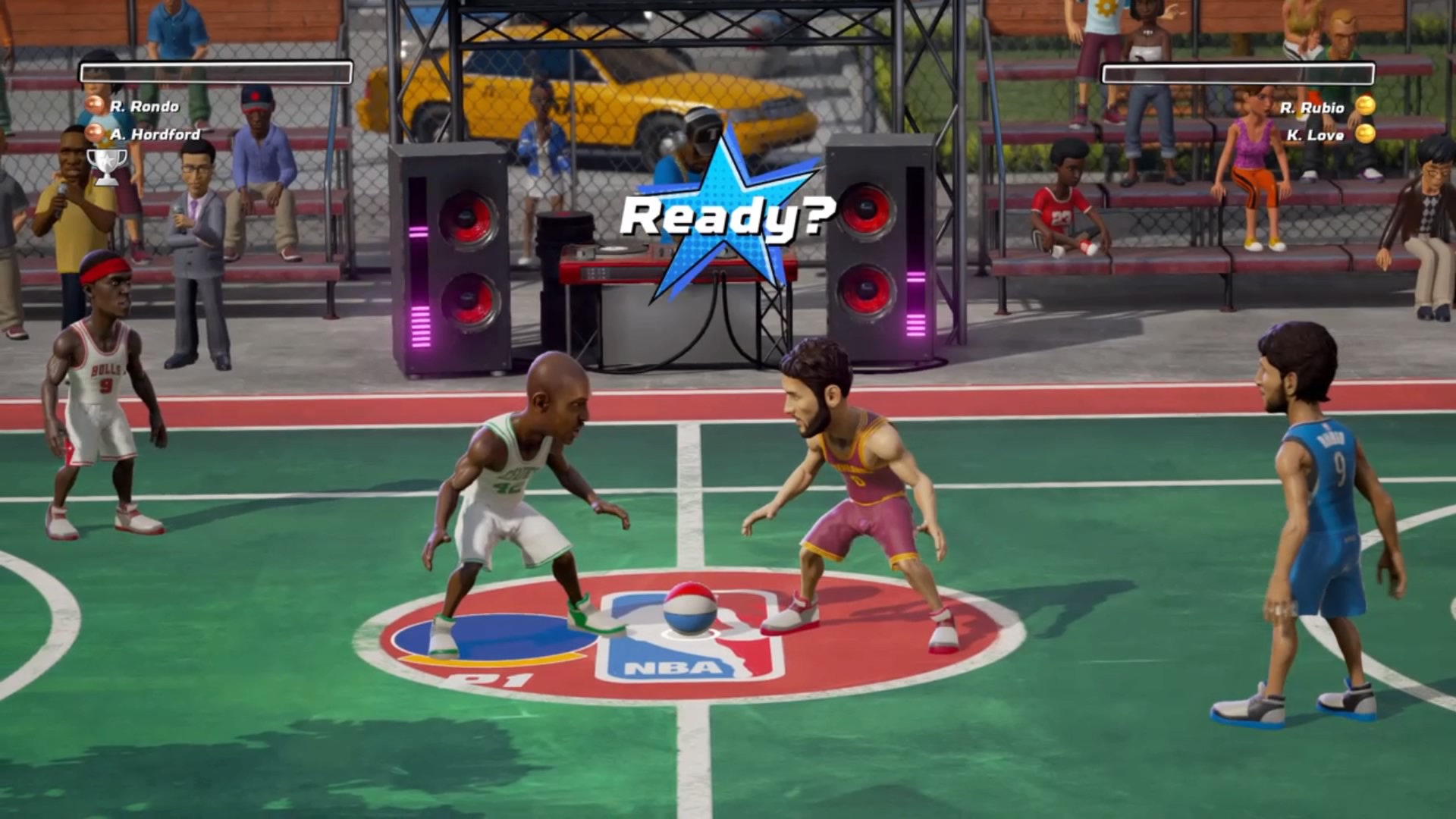 As much as I enjoy the spectator side of basketball, I find the modern games to be a little too complex for my brain to handle. Saber Interactive are hoping their budget, arcade title will entice some fanatics out to the court.

Specialising in two-on-two encounters, The action is fast and frantic. Passing and shooting carries a responsive feel with the timing of shooting being your first real obstacle. It’s not inconsistent but you need to dial it in before reliably hitting baskets and dunks. The game indicates feedback on shots you miss so you can respond in kind to early or late attempts. It doesn’t feel universal from player to player so, if you change your team up, you’ll be relearning the timings. Defensive options are pretty standard. You can steal, barge and block and ask your AI partner for assistance. It works well enough with some allowances for violent conduct. 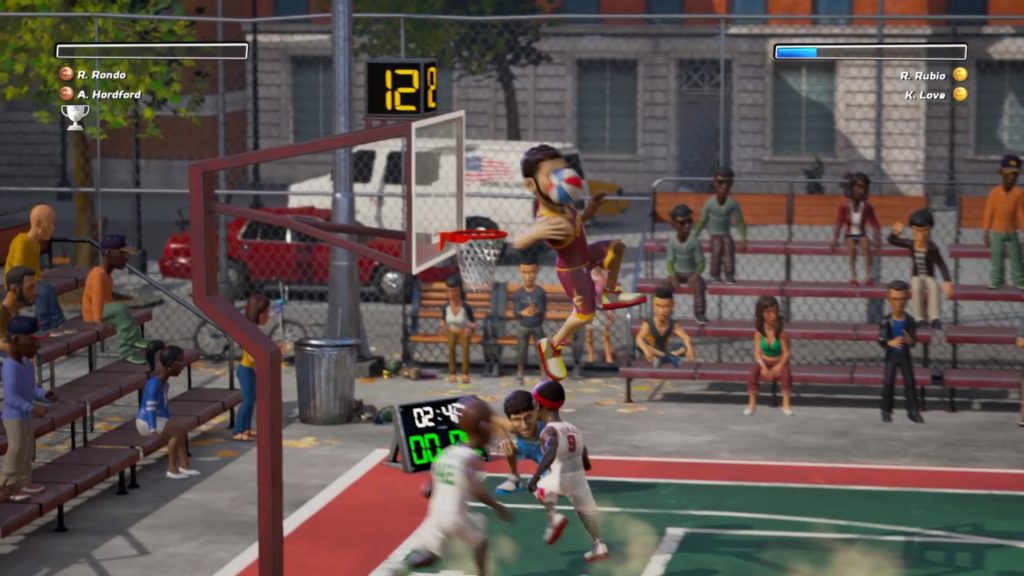 Sinking baskets boosts your player’s super meter and, once filled, you’ll receive a random power up. Some will effect player speed, their shooting and offer bonuses like double-points for dunks. There’s visual flair that accompanies it. Dunks and alley-oops garner particular attention with slow-motion lingering and flaming baskets.

The scoring effect of power-ups might prove divisive. With no obvious rubber-banding on display, wracking up four-point dunks can widen a gulf between two teams and unbalance an otherwise close competition. It does help emphasise solid defensive play. Just beware these power-ups are dished out at random. Knowing what each one does helps effectively nullify or take advantage of them. I’ve avoided making the comparison but this game is taking big inspiration from EA’s NBA Jam and NBA Street franchises. To the game’s credit, it doesn’t feel like a second-rate imposter. The fundamental action feels fun and fluid. 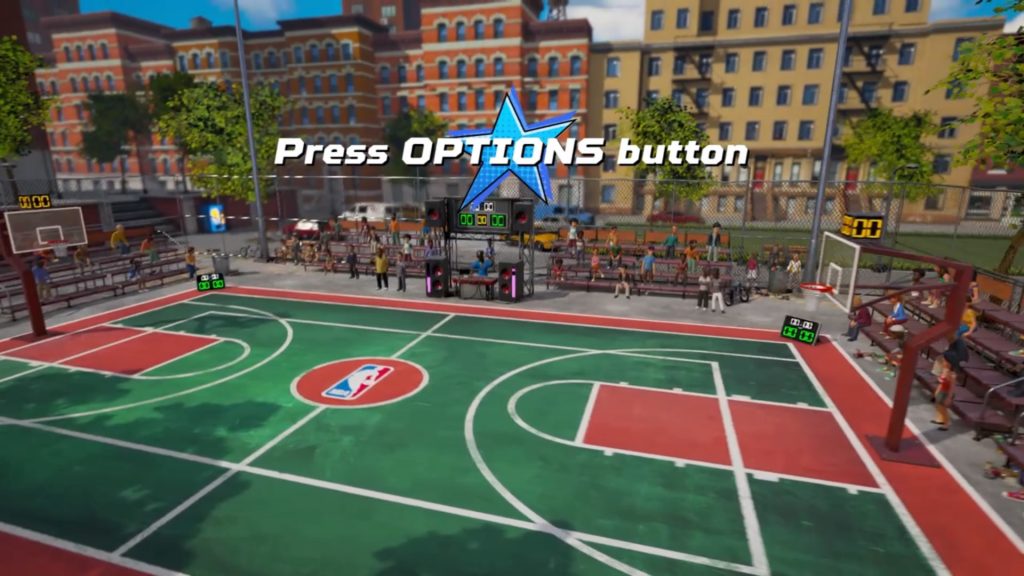 The license helps to realise some of the league’s biggest stars in a striking, big-headed cartoon style. The fictional courts carry a certain, stereotypical flavour as you globe trot from New York to Paris, Tokyo and beyond. Player likenesses are nicely caricatured. When you combine them with the special effects that come from super moves, they carry a larger than life presence. The audio tends to underwhelm. You get an appropriately themed, basketball-based rap track for the menu music and a commentator observes the action with a surprisingly stiff tone. It’s clear they were going for something more bombastic but the line selection and delivery don’t come together. I find it dissipates into the background and the frequency of scoring ensures phrases repeat all too often. There’s only one available perspective to play from and initially I found judging court-depth to be an issue. You get used to it but I’d have liked some alternative angles to view the action from.

Acquiring new talent for your duo is done by opening card packs. No micro-transactions are involved so you unlock new packs by leveling up and winning tournaments. There’s usually between 4-6 players for each franchise, including legends from their past. They’re all individually rated with their own strengths and weaknesses. As with other team-build card games, different, more prestigious versions of the cards could potentially land your way. It can feel like a lottery but the experience system allows for your existing cards to grow into the peak editions. Finding the right balance can be an interesting exercise in itself with plenty of variation on offer. 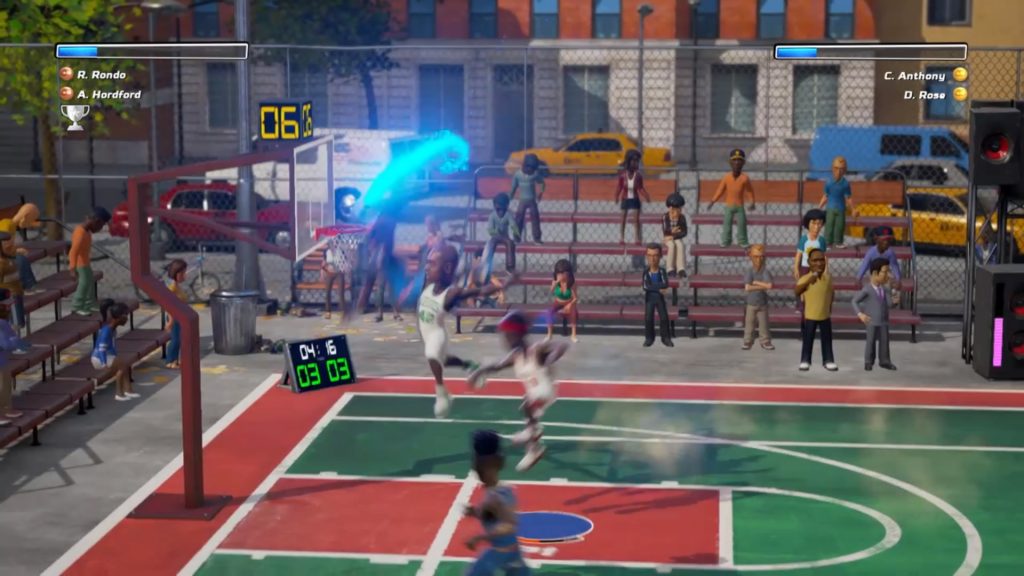 Modes are fairly sparse. You have a standard exhibition mode complimented by a tournament mode. Progression in the latter unlocks new venues and every game offers you and your players experience to level up. Player experience grants them with additional moves and flourish whilst your overall experience eventually paves the way for new card packs. Every game you play contributes to an experience pool so time on the court will always feel well spent.  Online consists of single ranked matches against another player’s dynamic duo. Complete with whatever experience they’ve gathered during their time with the game. It can present something unbalanced and daunting. If you’re after something more casual with friends, pray for a patch or keep your fingers crossed you can find a game with your buddies from the matchmaking. Your best bet is probably just to invite them round for some local play. Support is available for up to four players.

There are some curious omissions. Each match opens with a team select screen but you can only change your team in exhibition mode. You have to select new teammates, enter the match and then quit out to save that partnership. It’s a clumsy solution for a problem that shouldn’t exist. Whilst online is functional, there’s no option to invite friends or play an unranked session. 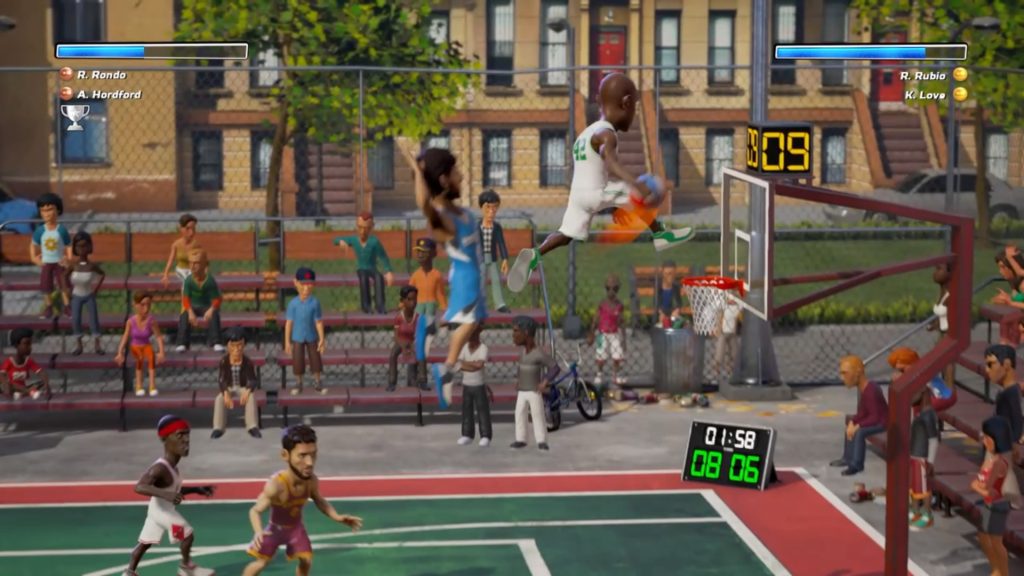 NBA Playgrounds offers a fun and entertaining thrash around the court. It’s influences are clear and what shows in the final product is a level of care to prevent this looking like a poor imitation. For the budget price tag, you can do a lot worse. Whilst it’s a game short on options and modes, it delivers an amount of care and character that make this feel like a worthy effort.

NBA Playgrounds
7 Overall
Pros
+ Fun, competitive basketball.
+ Controls feel responsive and simple to pick up.
+ The card collecting aspect always gives you something to work towards.
+ A striking cartoon aesthetic.
Cons
- Changing teams is a nightmare.
- Mode selection is sparse.
- No friends only online.
- Random power-ups can sometimes overpower.
Summary
NBA Playgrounds is fun, frantic and friendly. The scoring system can seem a little unbalanced and there are some curious omissions that stick out in an otherwise well-realised product. It's thin on modes and online multiplayer seems somewhat half-baked but it feels fundamentally enjoyable. There's a nice sense of progression as you acquire new cards and improve existing ones. If you fancy a new jam, this will provide.