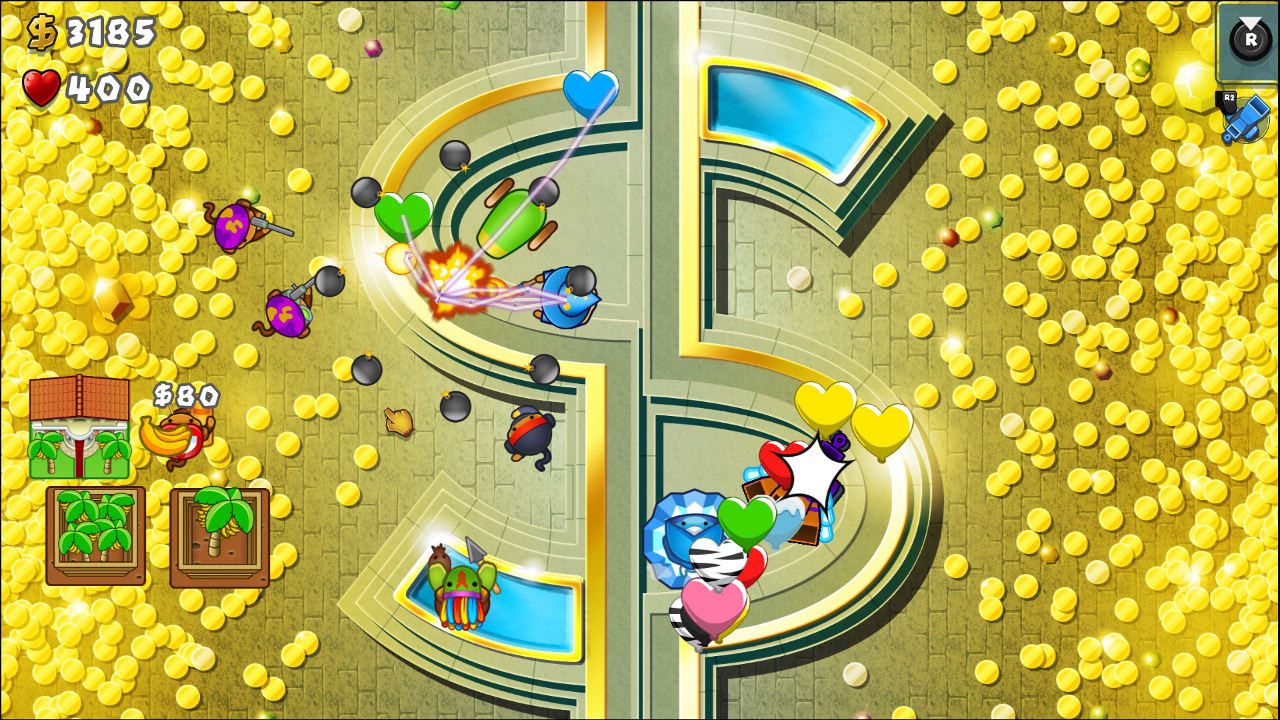 One of the great strengths of tower defence games is that they can literally be about anything and Bloons TD 5 has you placing monkeys down in order to pop balloons.  I presume that before Bloons TD 5 there has been TD 1 to 4,  but I doubt you need to play these first. Thats pretty much the be all and end all of any story element, but, that isn’t necessarily  a bad thing as it allows the game to get straight into the action. 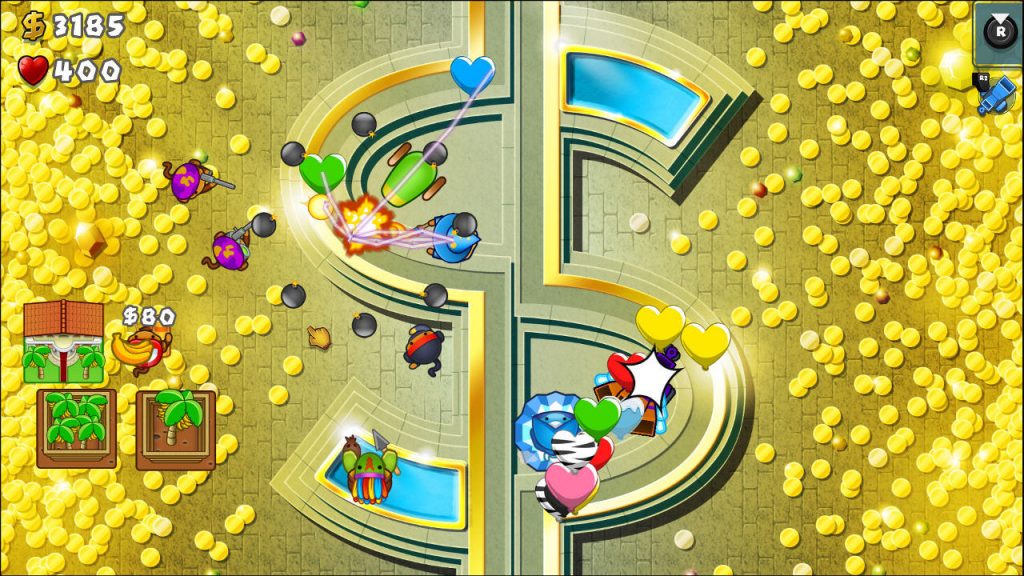 There are many aspects here which show the game’s mobile roots, and the first thing you’ll notice is the flash style graphics which are simple but clear. Things are bright enough and there is a range of environments and colour on display which shows a creativeness lacking from many other titles nowadays. Make no mistake though this isn’t​ in anyway challenging the PlayStation 4.

Although every tower defence game could be described in the same way, its worth pointing out how Bloons TD 5 works.  Things start and you’ve got a cash budget to buy a tower monkey and chose where you place this, no waves of balloons will come at you until you press triangle.  This happens after each of the waves, so you’ve always plenty of time to plan your defence before committing.  On the easiest setting there are 50 waves to survive, doing so will earn a bronze medal, harder difficulties have more waves to survive. Initially there is a small pool of monkeys to choose from but, as with everything else in this game, more will unlock as you progress. You earn gold for every balloon destroyed and this can in turn be used to place more monkeys or to upgrade your existing monkeys. 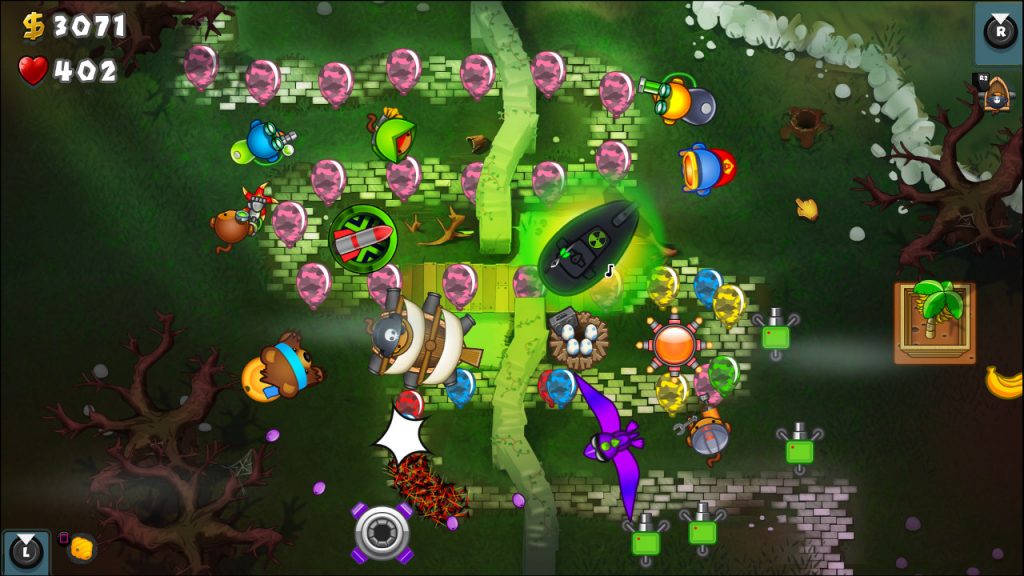 The whole upgrading path reeks of the mobile origins of the game as pretty much everything can be upgraded, either during a round for that game only, or after a round for overall stat increases. There are also multiple currencies to keep a track of and each one is used for specific things and on phones I’m sure this game would be riddled with in app purchases.  Luckily there is none of that nonsense here but as a result the multiple currencies just confuse matters and get in the way.

There are loads of levels to play through which are, once again, unlocked as you progress.  Each level has a different background and theme to it and the balloons wont always progress in a straight line down the route.  I found some of these backgrounds made it a little difficult to see exactly where the balloons would pass but this problem soon disappears once the first balloon has started it’s journey, as they never deviate from this set path.

Make no mistake Bloons TD 5 is a very difficult game, if you want it to be.  Overall there are difficulty settings for each attempt, but also naturally as you progress through the maps the difficulty goes up as well.  The difficulty ramps up the number and variety of balloons on an almost exponential curve and before long you’ll be looking to have precise placements in order to succeed.  Some of this can be alleviated through grinding up your towers but this sort of changes the game from being something you’ll play for fun, to something you’ll just do as a chore. 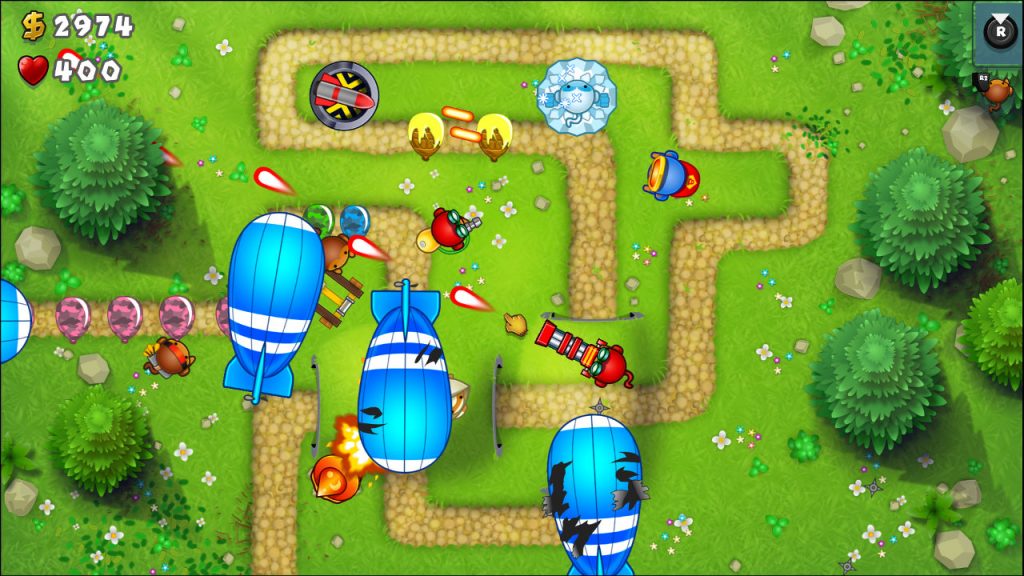 Naturally with a game originally designed for mobiles a new control scheme has had to be created to work on the DualShock 4.  The loss of the touch screen phone really hampers control here and as a result almost every button on the DualShock 4 gets a workout. It never felt entirely natural to me and the inclusion of a cursor on a screen, controlled by the left stick, felt cumbersome.

As well as the standard campaign, there is a couch multiplayer and some daily challenges which once again give you loot for completing.  It’s a full enough package offering a very competent tower defence game, but that’s about it really.  You could question what it is doing on the PlayStation 4 as it does nothing to utilise the system, and the mobile hangovers are many and varied.  However it is cheap and well enough constructed that there is fun to be had, and if you’re looking for a tower defence game this is one of the better ones on the system.

Bloons TD5
6 Overall
Pros
+ Lots of levels and content
+ Bright and well presented
+ Offers a decent challenge
Cons
- Mobile roots are all over the game
- Controls feel a bit cumbersome
- Difficulty gets pretty hard later on
- It literally is just a tower defence game
Summary
The mobile roots of Bloons TD 5 are many and varied. However it is cheap and well enough constructed that there is fun to be had, and if you’re looking for a tower defence game this is one of the better ones on the system.