From veteran Italian developer and publisher Milestone comes MXGP 2020 – The Official Motocross Videogame, based on the planned 2020 FIM MXGP race series. The seventeen unique tracks on offer here represent the series as it was supposed to have been in 2020, before, you know, 2020 happened.

In reality, what actually happened was eighteen race weekends at eight distinct locations, six of which are in this game. The only two missing are Lommel in Belgium and the Spanish venue. If you’re a purist and absolutely have to race a world championship as it happened in the correct venue, you could conceivably even replicate the two missing venues in the comprehensive track editor. 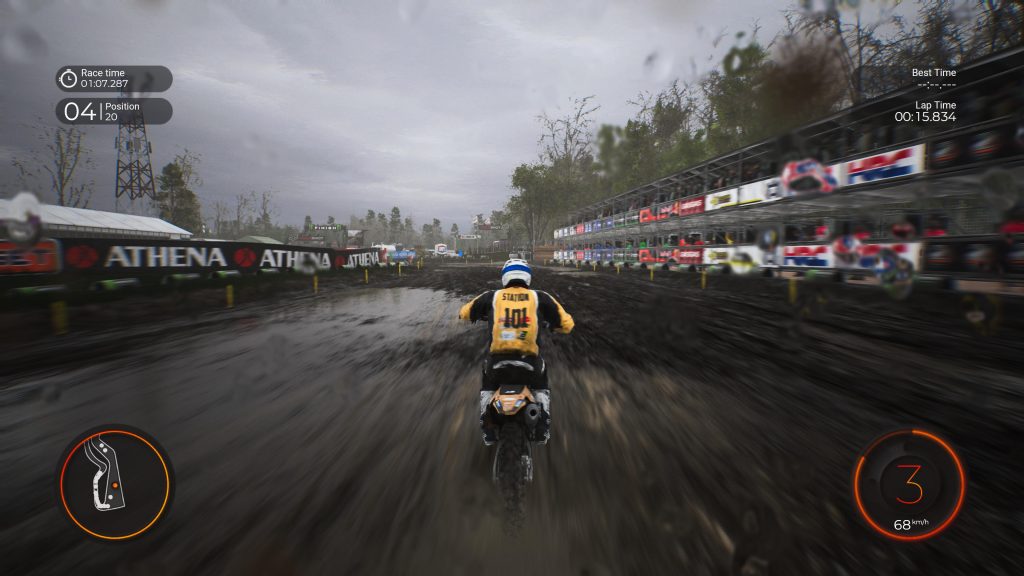 The rest of you, as you were. You’re thrust into the action in the first race in the series at Matterley Basin in the UK. For this reviewer, it’s a weird collision of real world and video game as I lived within a few miles of Matterley Basin in the nearby city of Winchester. I occasionally heard the noise of motocross engines drifting over if the wind was blowing in the right direction, but never made the connection to an event on this scale. You see, MXGP is big. Like really big. Twenty rider fields with full support programmes of multiple formulae big.

Unlike Moto GP though, it gets nothing like the media exposure it probably deserves. Relegated to Eurosport in the UK, it’s easily exciting enough to be shown on mainstream sports channels or terrestrial TV. And that’s a damn shame. Just like Moto GP, there’s a whole race weekend on offer. If you choose the option for your career, you’ll have timed qualifying, a qualifying race and two full-fat grands prix that are scoring events. 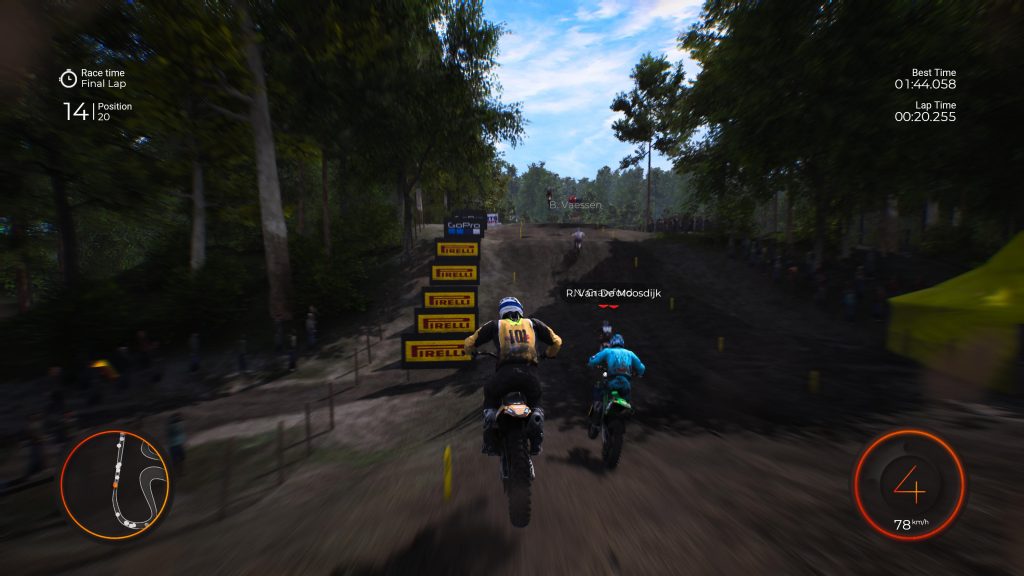 As for the game itself, we found ourselves struggling to get to grips with the handling. We freely admit our prior racing game prowess on two wheels has very much been limited to the likes of Excitebike and Moto GP URT rather than motocross. Tell a lie, we also played Motocross Madness on the 360. However, even on default setting MXGP 2020 is a challenging beast.

Perhaps Matterley Basin is a harsh introduction, but we rapidly found ourselves in last place struggling to make up ground. We hoped this was beginner’s jitters but it turned out to not be the case. Barring a second place on one track, we didn’t get a single podium in our opening half dozen races. Let alone a win, even against easy AI. There’s no gimmes here, put it that way. 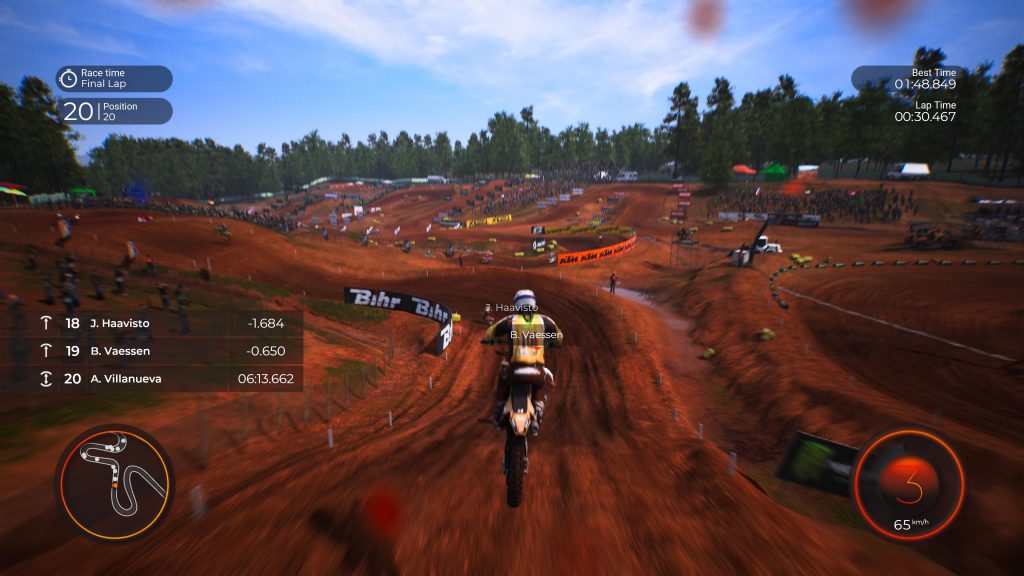 Milestone’s introduction to MXGP 2020 is rather perfunctory and key mechanics are barely explained. There’s a trophy for getting a holeshot and winning a race. We know what a holeshot is, but in the context of this game, not a clue how to nail one. Being to the first corner without a collision when not in pole position is a big ask. Some sort of short tutorial on optimal starts would help here. Similarly, there’s a trophy for pulling off a scrub. That’s one of those sideways stunts. We got it by accident though and we’re not quite sure how we did it. Again, you’re not shown what to do or how to do it.

This PS5 version is very polished with excellent haptic feedback. The speaker isn’t used, or if it is, it’s very subtle indeed. Instead, the rumble via normal means and the adaptive triggers depict every bump and engine over-rev with great aplomb. We made the mistake of playing via Remote Play and the lack of any rumble made for a very sterile experience. The weather effects and mud splatters are also quite excellent, though perhaps a little over the top if you’re in chase mode. We could understand massively obscured vision in first-person goggle view, but not otherwise. 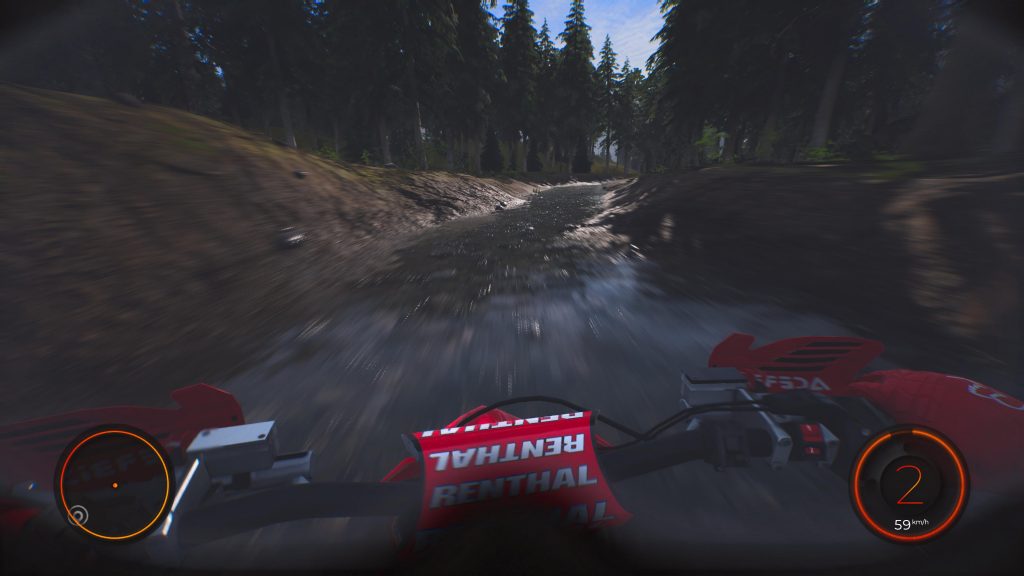 The real stars of the show here are the many and varied tracks. For a fan of the sport, you’ll be well catered for. We were glad that they weren’t afflicted by the curse of tarmacced racing tracks, the track designer Hermann Tilke. Though one muddy field with lots of berms can sort blur into one.  It makes the better designed tracks stand out that much more.

We get they’re a reproduction of the actual circuits, but it gets pretty frustrating when you’re hurtling along at full pelt in a rainstorm and completely miss a corner due to unclear track boundaries. A small yellow bollard is quite hard to spot, especially when the better tracks here have full advertising hoardings. The Turkish track at Afyonkarahisar is an early example of unclear track limits, just as the fixture two events later at Neuquen in Argentina is similarly frustrating. Not to mention if you miss a corner you’ll have messed up a timed lap or lost at least two or three places if you’re in the thick of the action. 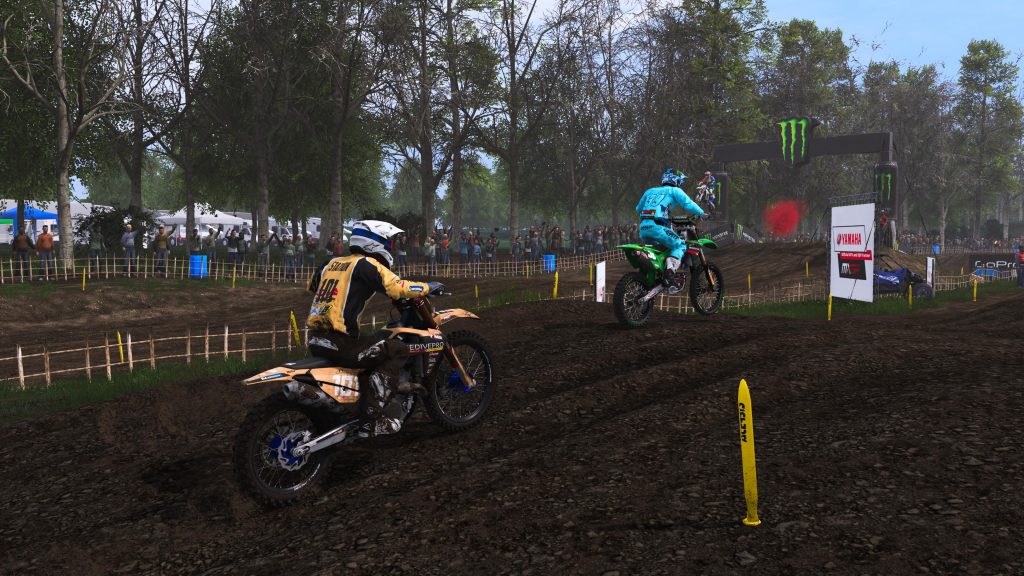 It makes practice, practice, practice all the more necessary, but some tracks can feel like a thankless task. We confess, we completely skipped a few venues on the second race when we realised we were on a hiding to nothing, either from our own ineptitude or getting punted off by the AI. Especially when it happens on a hairpin corner or approaching an obstacle.

One qualifying race had us sitting pretty in second, we got clipped by an over-ambitious AI pass, knocked off and two corners later we were in thirteenth. It feels cheap and very arbitrary. You’ll get dropped back on track a short distance back at a standstill. As well as losing time for the reset, you’ll have to accelerate up to full speed again. Joy. There is a rewind feature, but if you resort to it, you’ll lose out on an XP bonus at race end. 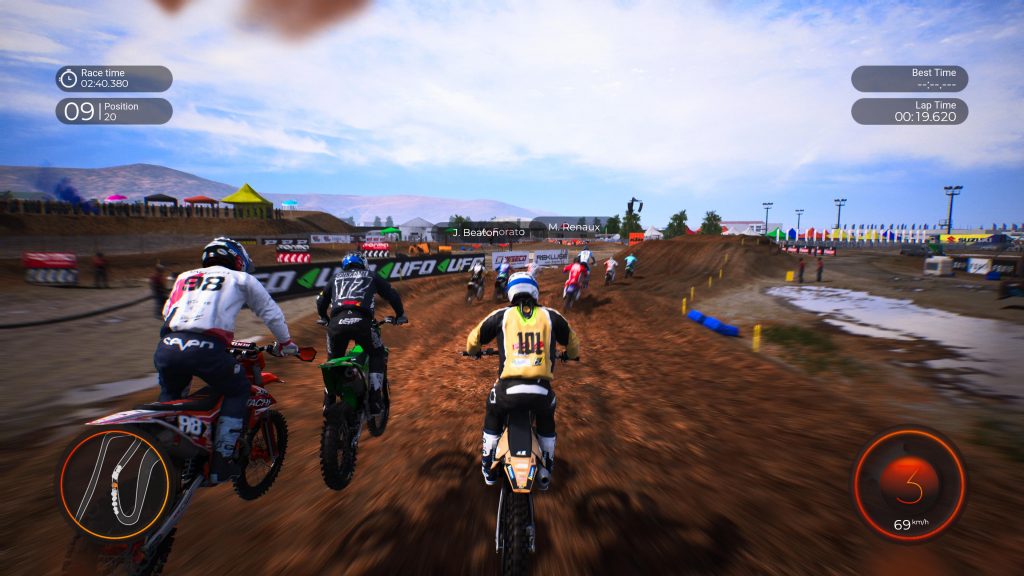 You can do timed laps in the playground mode, but only on the Norwegian area created especially for the game. These differ from qualifying in the race context in terms of you getting a split time compared to your previous best. Your time during qualifying is only shown in relation to the polesitter which can be frustrating as you’ll have no idea as to where you need to make up time.

Our best effort was finishing within three seconds of pole, but still dead last. This means you’re on the outside of the starting gate fighting to make up positions from the outset. This combined with the aforementioned non-holeshot make for hard going. 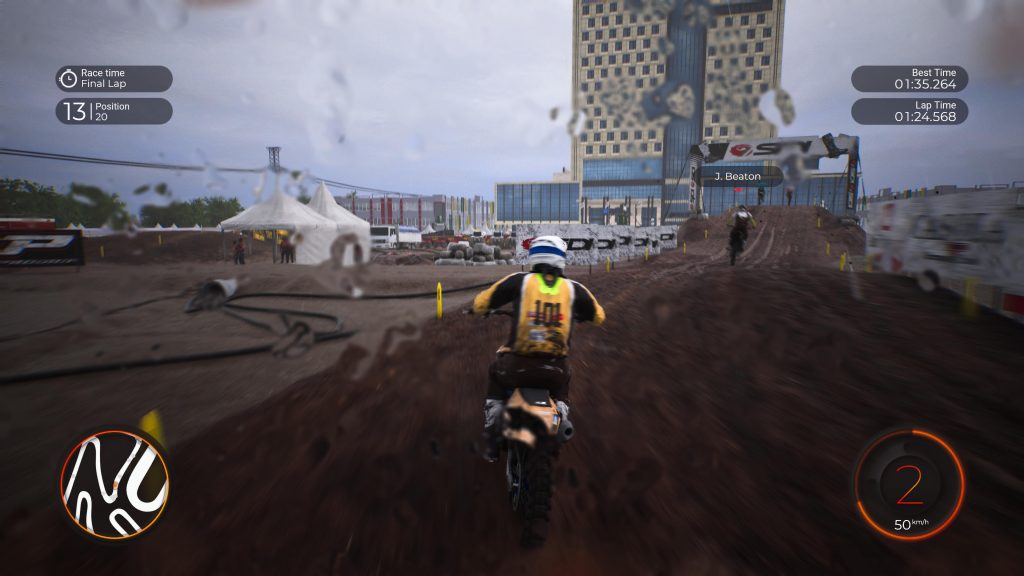 In summary, despite the relentless going and the sheer level of concentration to get anywhere, we felt compelled to keep on racing for the most part. Admittedly the fact we got XP for a completed event and added mileage to our cumulative count helped, but we plugged away even if it was only for a minor placing. Some tracks are joyless affairs due to vague boundaries but others are a sheer joy and we almost got a win on a few occasions. 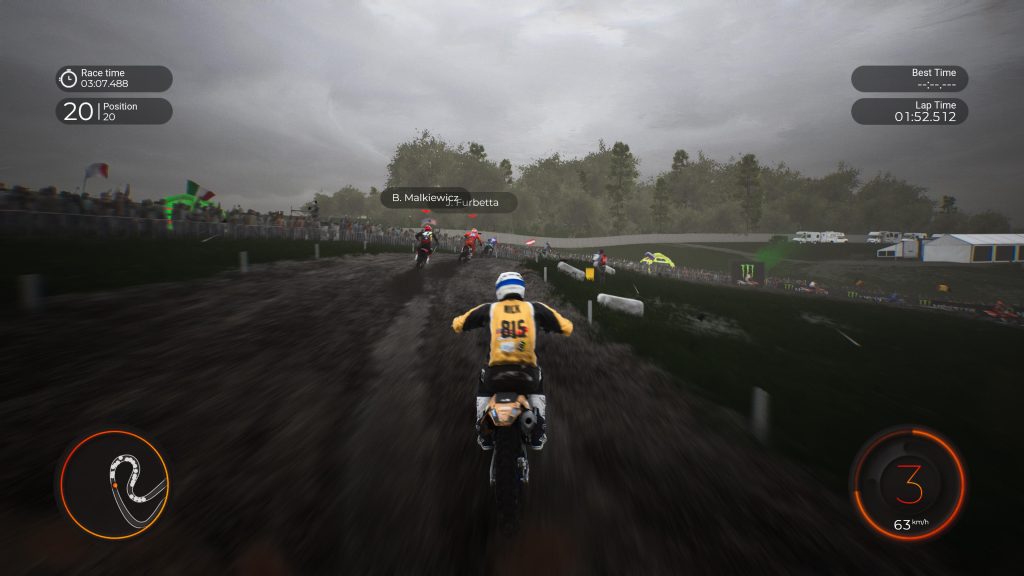 The haptic feedback is a particular highlight with every bump and struggle for traction conveyed with some excellently communicated rumble. Holeshots and scrub jumps could be better explained, heck, they could be explained at all. There’s an assumption you know what they are from the outset.

MXGP 2020 – The Official Motocross Game is a great racing game, just don’t be expecting to win races quickly. All the fun of the real life sport and then some. Perhaps a little on the harsh side for those unfamiliar with this particular facet of motorsport, especially in terms of it assuming you’re up to speed with key mechanics.

MXGP 2020 – The Official Motocross Game
8 Overall
Pros
+ Faithful reproduction of MXGP experience
+ Haptic feedback is very well done as opposed to being a by the numbers PS5 port
+ Weather effects are excellent
+ When you do place well, it’s so hard earned you’ll feel a genuine sense of achievement
+ Racing in our home county just a few miles from home is startling, in a good way
+ The best tracks are very good and not a Hermann Tilke track in sight

Cons
- But the worst tracks you’ll be on a hiding to nothing
- You’ll do well to win races at all, even against easy AI
- You’re very much left to get on with it
- Key mechanics are barely explained at all, holeshots and scrubs especially
- Qualifying is frustrating due to no personal splits, even in pits
- AI has an annoying tendency to punt you off so you lose ten plus places
Summary
MXGP 2020 – The Official Motocross Game is a great racing game, just don't be expecting to win races quickly. All the fun of the real life sport and then some. Perhaps a little on the harsh side for those unfamiliar with this particular facet of motorsport, especially in terms of it assuming you're up to speed with key mechanics.