This is an odd review because we already reviewed MX vs ATV All Out last April and this new release from THQ Nordic is simply the base game but now including the three DLC packs – Slash’s Snake Pit, Ricky Carmichael Farm and Hometown MX Nationals – which all come out in the months following the original release.  On the face of it, not much has changed and repurposing Mike’s review would probably have applied but I’m a different reviewer, the original review was on a base PS4 as opposed to my PS Pro and the game has had enough patches to currently be at version 2.5 but, for the most part, our original review stands.  But hey, here I am playing this new edition and no-one else out there is going to be reviewing it!

All Out is the sixth mainline game in this series, although its roots do go back to the ATV Offroad series which debuted in 2001, and nearly all of them have been developed by Rainbow Studios, the Phoenix-based racing game specialists.  Now, this series has often been met with a mixed critical reception but the games have generally been very playable and have usually felt right in terms of your vehicle’s connection to the track but they aren’t always the most polished of games and the main criticism against All Out last year is that the it was very ropey technically with screen tearing and pop in issues indicative of a game that had been either rushed out or just not given the attention a full price release demands. 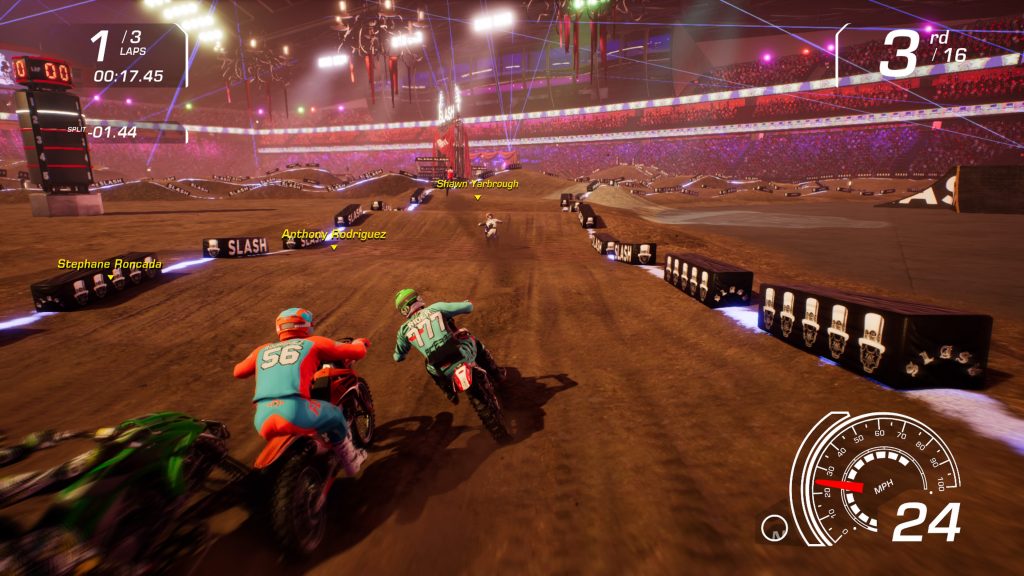 This game continues the series tradition of mixing bikes and ATVs in various race events and freestyle stunt competitions.  However, before you can get into the game’s many race series and single events, you are thrown into an open area that offers plenty of ramps, tracks and terrain types to experiment on and it also connects the game’s handful of tutorials.  These explain the basics of racing and then some of the more technical aspects around clutch control, shifting your rider’s bodyweight and your arsenal of stunt moves.  You’d think of it as a sort of hub area but unfortunately the meat of the game – the garage, the single events, the race series and the online options – are all just accessed via the menu that you trigger with the Options button.  A scattering of 25 collectibles does give you some reason to explore the area though.

In terms of actual events each series offers you a number of events to compete in.  You can usually pick whatever type of vehicle you’d like and then line up.  I’ve been the only ATV rider in a motorbike race and so on.  You can take part in supercross, nationals, waypoint and opencross events and these all generally involve speeding along but knowing when to relax the

button and using your right stick to lean into turns or angle yourself, Trials HD-style, into the inclines, dips and ramps that make up the mud-based tracks in the game in an effort to keep your ride as smooth as possible.  Sometimes easing off the throttle is the way forward if you want to land optimally on the next ramp because going all out (bLOLf!) is going to see you losing momentum. 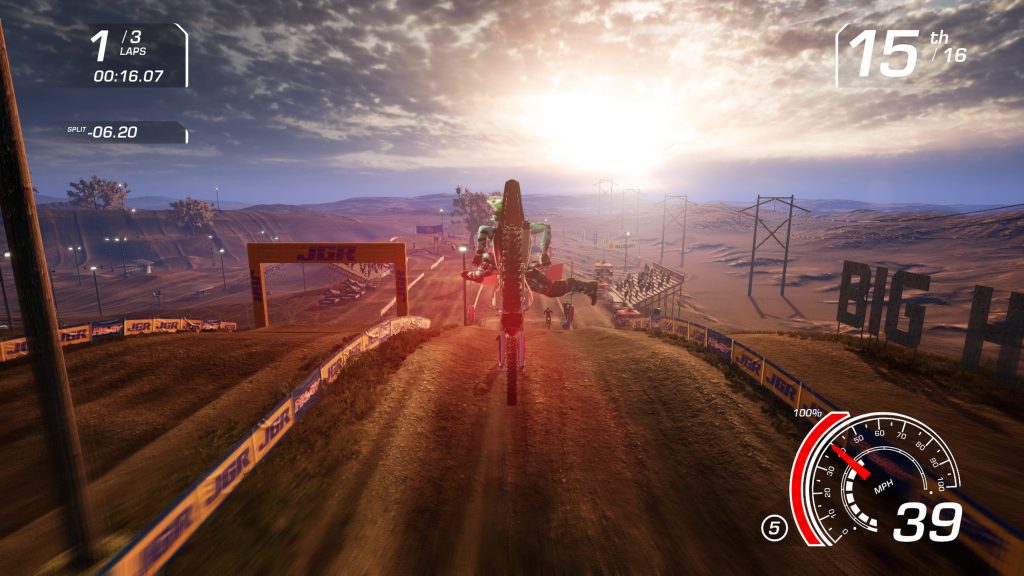 Initially it feels a little twitchy, a little bit light but it doesn’t take long to adjust and at that point you do feel that the track genuinely matters and that you need to be aware of it rather than just speeding to your next turn.  There’s a great deal of sophistication to this.  Sure, you can set the game to Easy or even Beginner and absolutely devastate your field of opponents but on anything from Medium upwards you need to start learning the tracks and figuring out when to sacrifice a longer jump for maybe a shorter one that gives you a smoother landing and that kind of thing.  For a game that is so playable for beginners, this does cater to hardcore motorcross fans too.

This extends to the vehicle customisation and tuning too.  Now, I don’t know the first thing about tuning motorbikes but I followed a few online tutorials and it radically affected the performance of my rides in the game.  You can tinker with your engine, clutch, tyres, suspension and so on and this really does make your vehicles behave differently.  You unlock the options by earning in-game currency by winning matches and there’s no real grind to that. 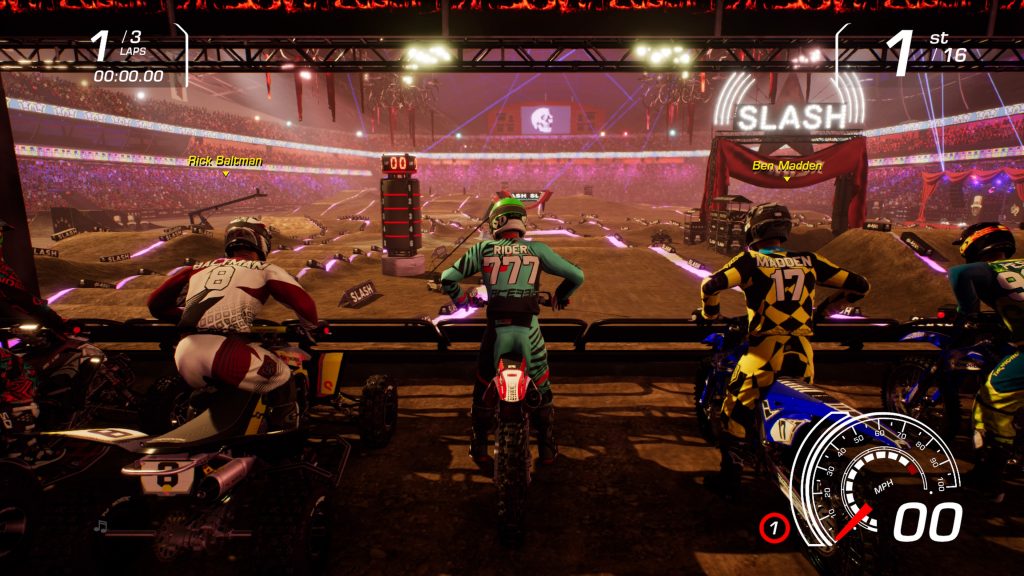 You can’t really criticise the game for just doing racing, that’s its whole thing, but casual fans might start to get bored if playing on Easy or lower but frustrated if going for anything higher and in a series you can’t restart races so in a title series, it’s very easy to get your progress wrecked by taking a ramp at the wrong speed or coming a cropper at a tight turn.  The difficulty can be a little bit inconsistent at times too with some tracks being an absolute breeze to get through and others being very technical.  Unfortunately, the game doesn’t really give you the heads up in terms of each track’s level of difficulty and so you’ll likely have to replay some events a few times.

Last year the game definitely launched with some serious performance issues but we’re now up to version 2.5 and things are a lot smoother now.   I’ve not seen any tearing or stuttering at all.  There’s definitely a little bit of pop-up in the distance but the game shifts along so quickly that you can’t really scan that far up the track anyway.  When you bring in the nice lighting, especially with any sunny courses, it actually all looks really nice.  It won’t be winning any awards but it looks at home on the PS4 and not just like an up-rezzed version of previous games in the series. 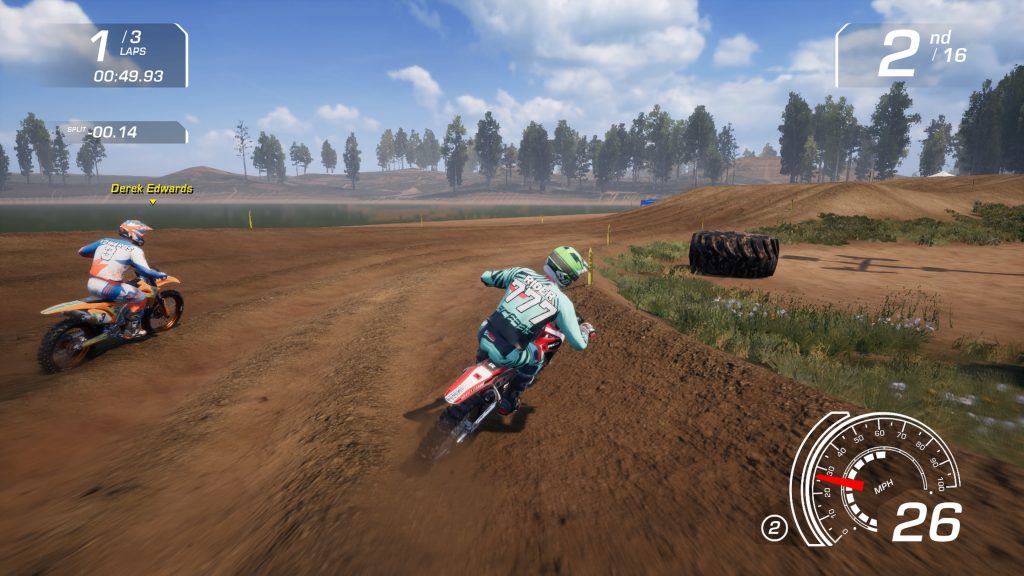 The sound is, as you’d expect, dominated by the throaty rasps of the engines in the game and they sound suitably realistic (although bike nerds have stated that the sounds aren’t exactly right).  The soundtrack is a horrible playlist of pop punk that never gets more authentically punk than The Offspring, which is a worry.  But if you like that sort of music, you’ll be happy.  We turned the music down in the options pretty quickly.

The bundled DLC adds more value to a game that already has a lot of tracks to race on.  The Slash’s Snake Pit levels are giant indoor tracks with rock concert lighting and while they look good, we found them to be far too challenging.  The other DLC packs were more enjoyable, especially Ricky Carmichael’s Goat Farm which takes the legendary rider’s real-life home course and gives you a mixture of events to race through there.

While there are lots of tracks, they can start to feel pretty samey.  This is especially true in race series that offer six or more races in one type of environment.  Getting through those can feel pretty repetitive but that maybe speaks to the fact that real motorcross fans are the ones who will get the most out of this game but we do enjoy the fact that there is enough compromise to take it from ‘sim’ territory to something more accessible.

So, overall we’re very happy with MX vs ATV All Out: Anniversary Edition.  It’s an enjoyably raw and authentic motorbike (and ATV) racer that lets you experience the thrills and spills of the sport but without the high chance of paralysis.  The nature of reviewing games is that you have to plough lots of hours in a short space of time into them so that you can move on to the next game and that approach doesn’t favour this one.  This is a game to dip in and out of rather than try to mainline it over a week.  There’s a lot of content here and because of the repetitiveness, it can lose its appeal after you’ve raced 20 tracks one after the other but if you can pace yourself, on and off of the track, there’s plenty to like here.

MX vs ATV All Out: Anniversary Edition
7 Overall
Pros
+ Great connection between vehicle and track
+ Good for novices and experts
+ Looks nice
+ Good sense of pace
Cons
- Some tracks are very bland and samey
- Difficulty can be inconsistent
- Doesn't explain the best ways to tackle technical tracks
Summary
Fans of off-road and muddy racing, and gamers who just like arcade-style motorbike action, are well catered for with this very competent motorsports title. A year's worth of patches have answered many of the issues from the 2018 release and we like seeing all of the DLC included on the disc too.