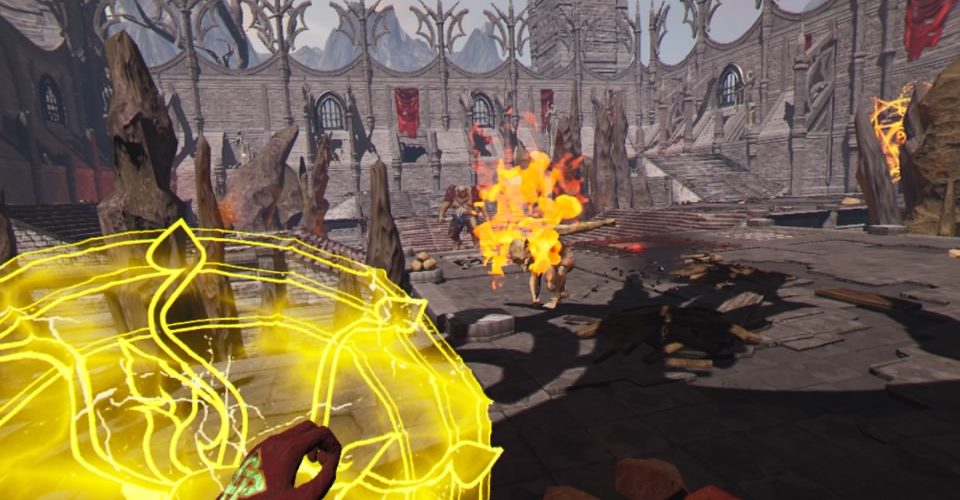 The Wizards came out on PC last year and has now arrived on PSVR in the form of an Enhanced Edition. Two Move controllers are needed as the mechanics required for casting spells are unique and the strongest part of the game. 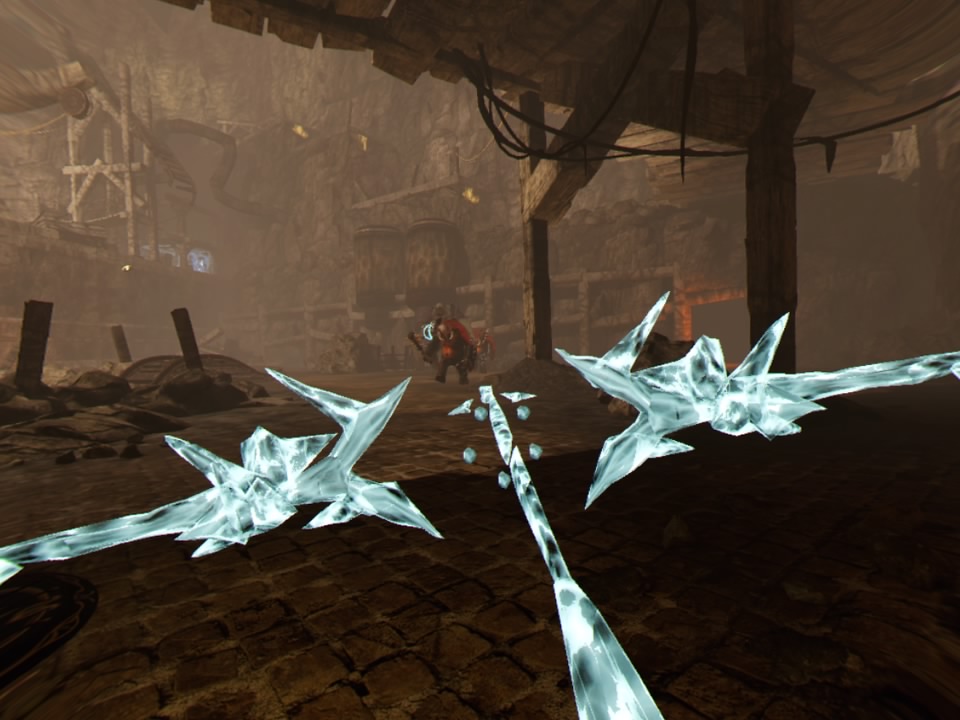 You play as a nameless wizard apprentice who must blast orcs, imps and spectres on his way across three locations, through eleven levels. Your deceased master leads you through the game, narrating all your progression and actions which is the closest you get to a story. The narrative isn’t too important as the levels have been created to encourage replayability through score chasing and collectible hunting.

Played from a first person perspective you can move through teleporting by pointing at a spot on the ground, through free movement which may induce nausea in some, or a mixture of the two as using one does not disable the other. You’ll be exploring ruins and mines, solving the odd rather simple puzzle but mostly you’ll enter an area and magical barriers will appear blocking your exits, forcing you to defeat all enemies before you move on.

To do this you have a range of spells at your disposal. You start off with a very small selection but by the end of the game you’ll have a lot of different options. The interesting part is that rather than each spell being a button press or being chosen from a weapon wheel it’s all gesture based and more often than not it works very well. 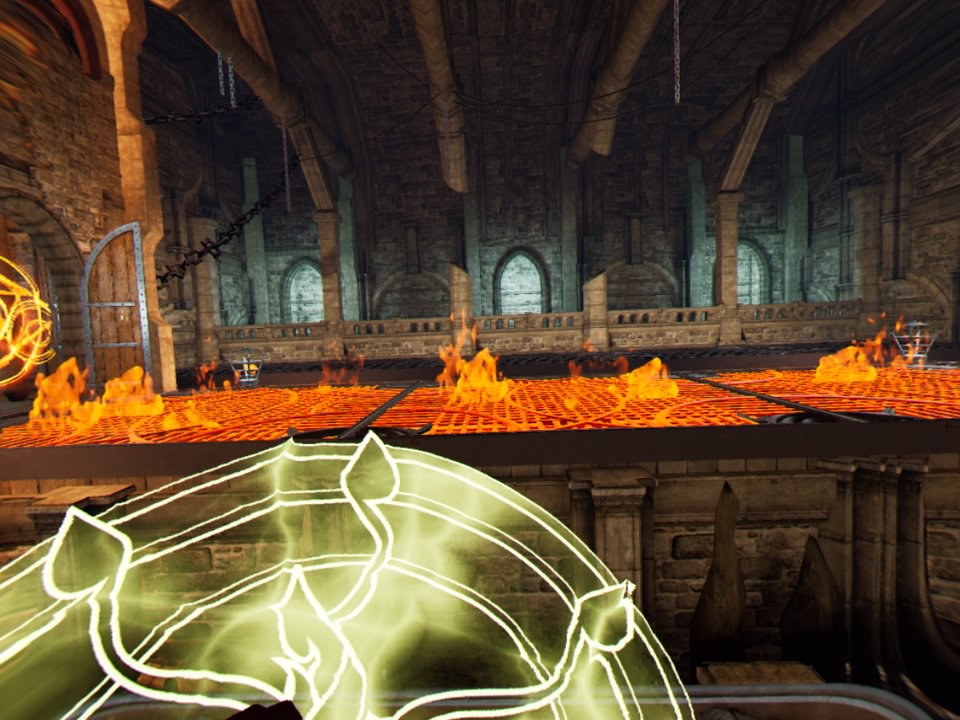 If you want to throw a fireball you press the trigger on your right controller and then turn your hand over so your palm is facing upwards and a fire ball will appear in it which you then throw as you’d expect, aiming where you look. To raise a shield you press the trigger on your left hand and bring your arm across your chest as if you’re raising a shield and it’ll appear to defend you against a few hits. Later, more powerful, spells need more complicated motions involving both hands but generally speaking whatever spell you’re going for activates. There was the odd occasion when I’d do a motion under duress and it wouldn’t work but I’m happy to think that was me not quite getting it right or starting the motion before pressing the button in panic.

That’s because the majority of the enemies in the game rush you. There are a couple of enemies that will attack from a vantage point with projectiles or magic but in general you’ll have enemies of different sizes running towards you, when they reach you they’ll try to hit you with their weapons. Kill them quick enough and this won’t be an issue, otherwise the shield and fireball combo or a quick teleport away will do the trick. When in combat the teleport function has a cooldown, making the distance it’s possible to travel shorter each time it’s used to stop you just flying around the arena faster than any enemy could possibly cope with. 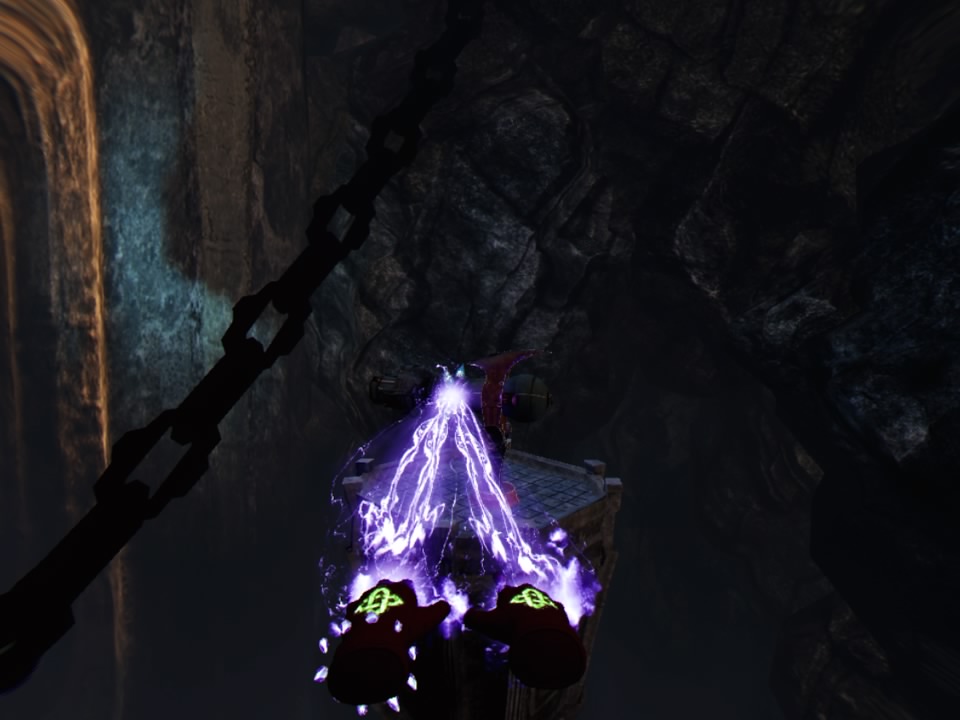 Each level will reward you with spell potential, which can be used to upgrade your spells giving them new characteristics or enhancements. You’ll usually get a few for hitting certain score thresholds and finding three pieces of a crystal. In levels you can also find Fate Cards which you can apply at the start of a level to make it easier or harder and it’ll modify your final score depending on what you used, incentivising you to use the harder cards for a higher score. These include giving enemies more health, making them faster, giving yourself less health or the opposite if you want to make things easier. Online leaderboards show the highest scoring players although the way the levels are set out makes me think there is a maximum score you can get so once you’ve hit that then there’s no improving it.

There is an Arena mode to choose from the main menu which drops you straight into the action without the walking around of the campaign. If once you’ve finished the story you want to continue casting spells then this is probably where you want to go but it’s not a massive change of pace from the main game, there’s just no down time between the fights.

Visually the game is okay. Some of the environments look very nice and the enemy designs are decent but the animations are very basic and although the spells look fine you aren’t going to be throwing around impressive graphical effects everywhere. Certain elements of the environment break apart which can look good when it works right but often you are left with stuff floating in place. 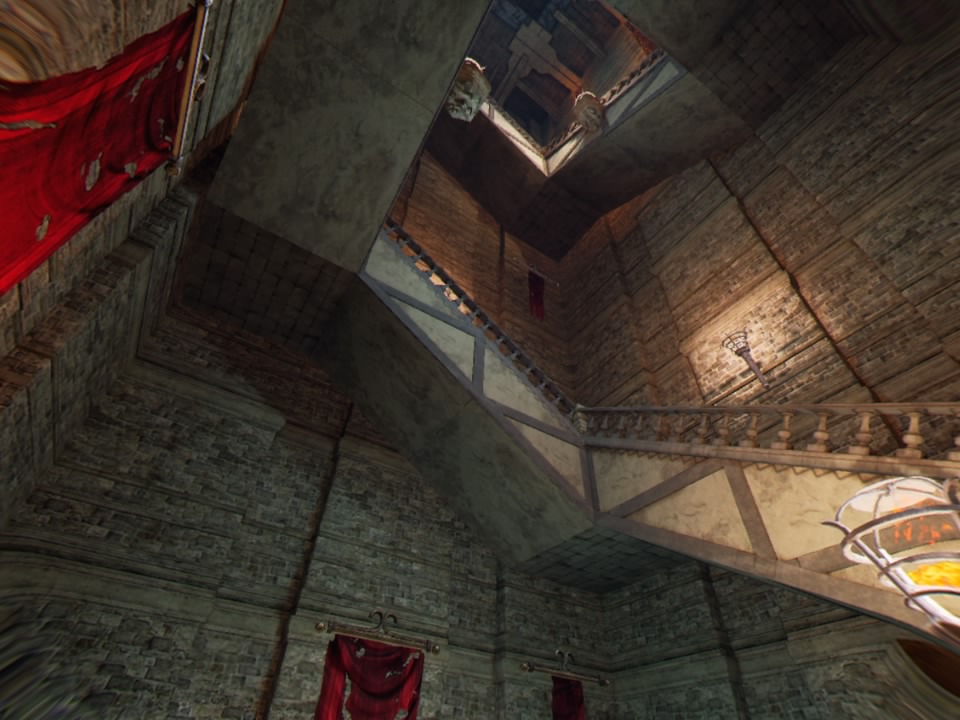 Ultimately The Wizards is a fun title for those wanting to cast spells through using gestures. Despite the small amount of levels things do get rather repetitive with a lack of enemy variety and the majority of the game being based around arena battles with enemies simply running at you. However the spell gestures work well, the combination of teleporting and free control is very welcome and you’ll attempt levels again to try and get all the spell potential to power up your spells. If you have a VR set up and are sick of shooting guns at things then although this is still mostly wave based there’s at least a slight twist to the formula.

The Wizards
7 Overall
Pros
+ Spell gestures work well
+ Spell potential rewards offer replay value
+ Good variety of spells
Cons
- Repetitive gameplay and enemies
- Only eleven levels
Summary
The Wizards offers a slight change of pace from the wave based shooters PSVR is flooded with. You're still taking out waves of enemies as they run towards you but this time you're using gestures to conjure spells and it works very well. It's quite short and even then the constant battles do become repetitive but the spell upgrades do give a decent incentive to replay levels.

One thought on “The Wizards – PSVR Review”