Megaton Rainfall is a game that completely speaks to everything I want from a PS4 game and a PSVR one.   I played the arse off of quite a few of the Earth Defense Force games and I loved films like Shin Godzilla and Pacific Rim.  Big, stupid, ridiculous destruction is exactly what I want my PS4 to be rendering in front of me and Megaton Rainfall has arrived on PSN promising to deliver exactly that.

You begin the game floating in the air while a voice explains to you that you are now empowered with the sort of abilities that Superman would be jealous of.  You can fly and are indestructable but can also shoot energy blasts from your hands and also move large objects using telekinesis.  The reason for your recent upgrade from human to superhuman is that the Earth is under attack from a devastating alien force and your dad (who is essentially God) wants you to fight off the invaders. 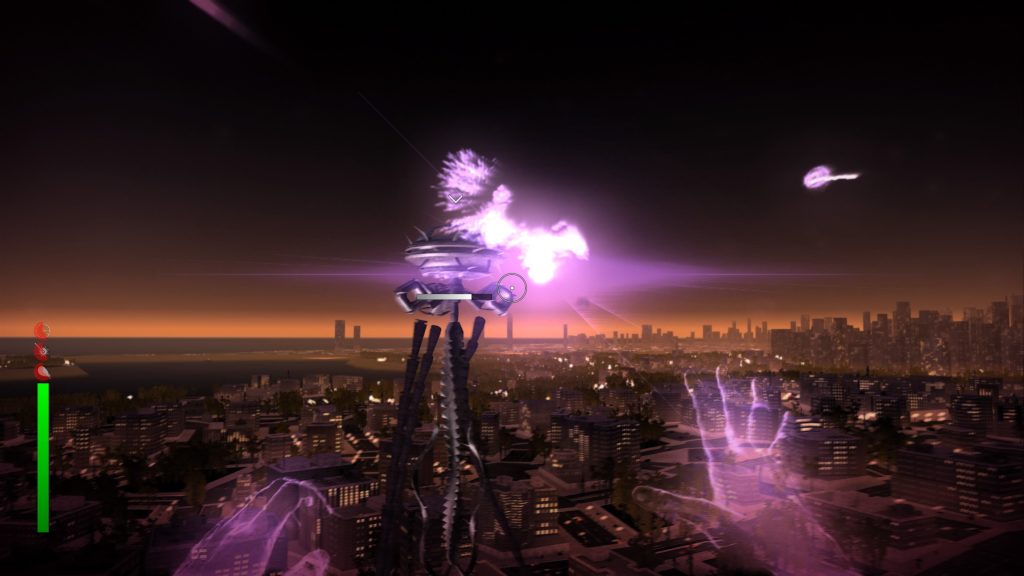 You patrol the planet, flying from battle to battle over deserts, oceans and cities.  Enemies show up as points of light that you can zoom towards and usually when you find them they are doing their best to shoot, ram, stamp on or levitate the various buildings in the city in an effort to wipe out the human population.   To counter this you’ll need to shoot them, preferably in their weak points, before they do too much damage but rather than being a superhero simulator, this is a game about collateral damage.

Enemies attempt to dodge your attacks and one of your blasts can topple a skyscraper so you need to be careful lest you become as much of a threat as the aliens.  This adds some nuance to the gameplay as do your new super powers which are handed to you after each mission.  It also cleverly deals with the problem of making you overpowered.  You may be invincible but the world isn’t and you become more and more dangerous as the game progresses.  You start off with just the ability to fly and shoot but before long you can drill through the ground, freeze time and unleash more devastating attacks. 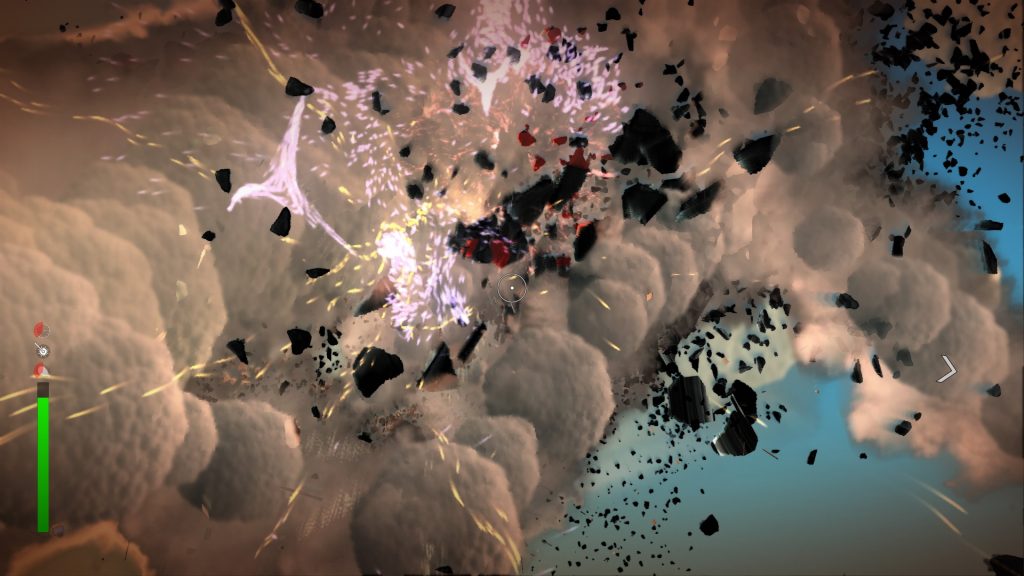 As powerful as you are, the enemy threat is just as impressive.  While they can’t hurt you, they can definitely take lumps out of the city and eventually the planet itself so the key to success is prioritising your enemies and taking them out as quickly as possible.  This isn’t an easy game either.  You’ll be failing quite often but the game is fairly generous with its checkpoints.  Some sections may have you tearing your hair out but I found that a change of tactics often helped.  One criticism is that sometimes it’s not clear why you’ve failed or how you dispatch a particular enemy but you’ll be able to work it after a couple of attempts.

Much like EDF, this game may well split opinion.  Is it just dumb fun?  Maybe.  Probably even.  But sometimes you don’t want an epic adventure that takes hundreds of hours and is mostly just you travelling to things.  Sure, as far as open worlds go, having the entire Earth (and beyond) to play in might sound daunting but you can fly faster than the speed of light so getting around isn’t the chore that it is in other games. 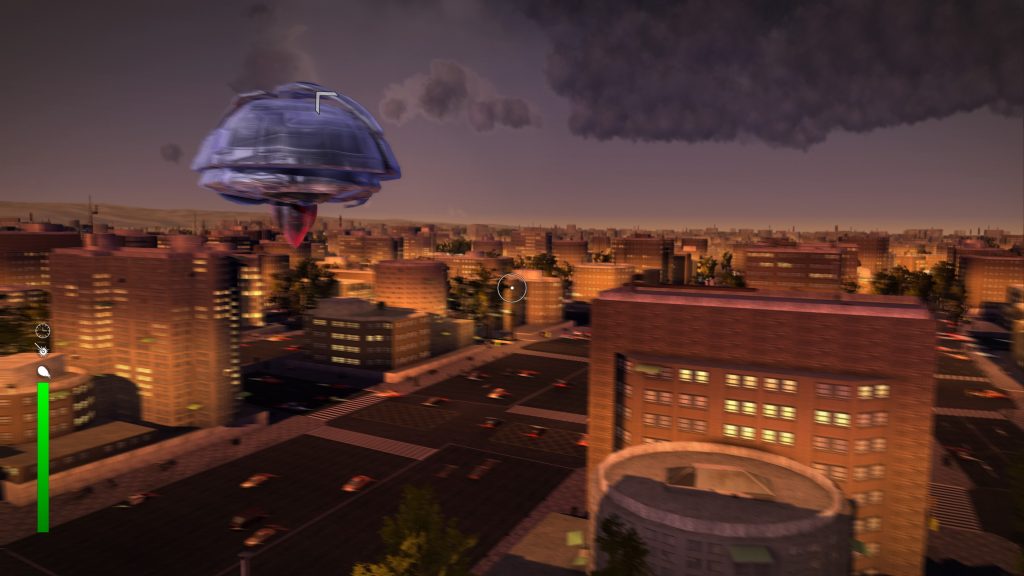 I started the game in VR before switching to non-VR to grab the screenshots you see on this review.  In VR the visuals are spectacular.  Flying around cities taking out gigantic robot enemies is all we really want from a game and the sense of scale in VR is magnificent.  There are some compromises in terms of detail but this is one of the best looking games on PSVR so far.  Outside of VR it still looks good but where’s the fun in that?  Also, when it comes to the destruction the game is brutal.  Entire cities are killed off in attacks that resemble the dream sequence from Terminator 2 and later on the aliens really do take things to another level in spectacular fashion.  What more could you want?

The sheer madness of this game is evident in the screenshot above.  See that blur?  That’s what happens when you’re flying around a city at superhero speeds.  The screenshot was taken right off of the Share button.  It’s just that mad.

Initially the visuals did seem a little compromised in VR mode.  Huge wedges of blackness would cover up my peripheral vision and the 45 degree turning felt unnatural.  These were apparently there for my comfort but while turning off all those anti-motion sickness countermeasures may cause you problems, when you do the game looks so much better.  Your mileage may vary though if it causes you to vomit yourself to death.   But unshackled from the game’s protection you’ll fully buy into the superhero fantasy the game is selling you. 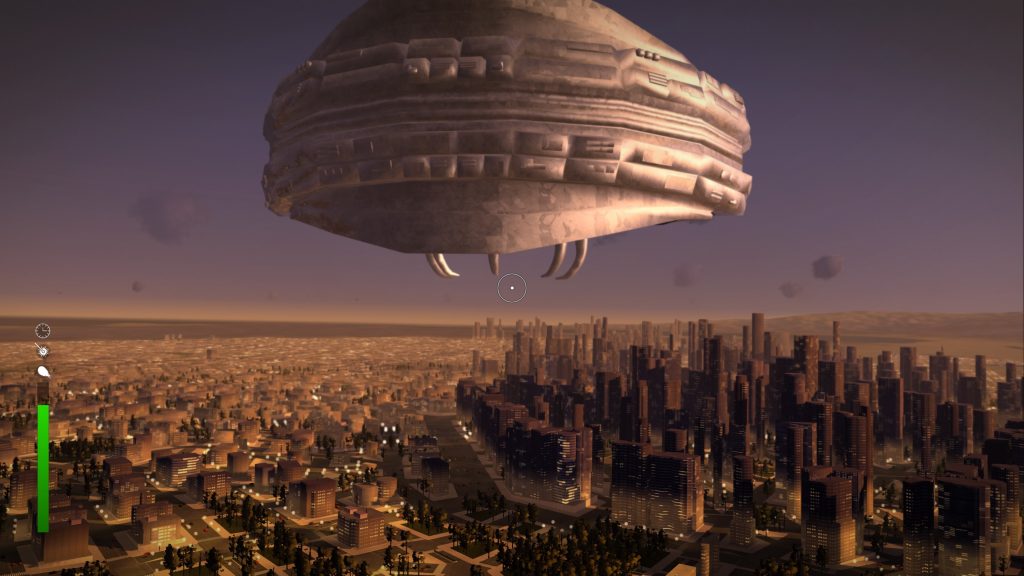 On top of that the moody soundtrack and spooky voice acting from your deity Dad are decent also.  This is a game that may well have a small team behind it but you wouldn’t know it.  The presentation here is top notch, especially in VR.  Seeing buildings fall and hearing the screams of the citizens starts to fill you with panic and really keeps you engaged with the gameplay.

While the game might not offer too much additional depth or variety, what it does is one thing really well and we adore it despite the occasional visual glitch.  In an industry where games are celebrated for dragging you around open worlds full of nothing while you perform menial tasks for little or no reward, we need games like this that offer unique experiences without all the additional fluff.   That’s not to say that this is a quick and dirty VR experience either.  Sure, PSVR is still finding its way as a format and is full of one or two hour games that wouldn’t cut it outside of VR but Megaton Rainfall offers a substantial challenge and if you want to literally be some sort of Superman/Jesus combo taking on massive robots then this is the game for you.  If you don’t?  Lose my number.

Megaton Rainfall
8 Overall
Pros
+ Spectacular use of VR
+ Fabulous, destructive action
+ Huge sense of scale
+ Genuinely fun
+ Can be played outside of VR
+ Offers a lot of anti-sickness measures
Cons
- Not that much variety
- Is possible to get stuck in the terrain
Summary
Superhero Jesus meets the Ravagers of Earth Defence Force. In VR. Yeah, you're sold on it. Megaton Rainfall is fabulous.