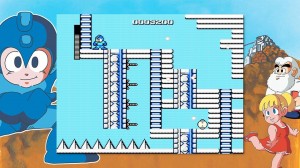 Mega Man and I have had a Somewhat turbulent history. Up until recently I had never owned an NES of my own due to be an out and out Sega fanboy. The only exposure I had to Mega Man as a franchise was on the Game Boy and due to its brutal difficulty and other releases at the time it was pushed aside.

It wasn’t until the internet that I
saw any mention of the character in any degree of popularity. With the pages of Newgrounds and Deviantart being filled with recoloured sprites that fans created in a vain attempt at originality, fan art and excellent remixes of BGM’s found in the titles. I switched off. I didn’t get it. as a child of the UK i had no idea why this character was so universally praised considering in our playground Nintendo was rarely spoken of and dismissed as a childs toy. Compared to the powerhouse that was the Mega Drive. While we had access to Mega Man in a way, we didn’t want it. We were young and ignorant. What i was ignoring was the genesis of fantastic run and gun platforming. A fun yet challenging series of games which has inspired countless other titles of its genre to listen up and take note, with such influence still being felt today. Mega Man was important for sure.

Mega Man is a simple premise which sums up a great number of the games of its era. You run, you shoot, you die due to a pitfall or an unseen or difficult enemy, you pick yourself up and try again. The premise is simple, the game is not. Each game is a trial of your skill and determination. When you first play Mega Man or its sequels you will die, a lot. The onus is on you to learn from your mistakes and carry forth your new talent into the next challenge which may sound oh so familar if you spent Spring playing the likes of Bloodborne or Dark Souls 2.  As you progress through each game you will come up against Robot Masters which act as your initial bosses who protect a stage themed around them, I.e fire man lives in a fire stage and you’ll figure out the rest. This then ties into a very neat mechanic. When you defeat a Robot Master you will then gain their ability which at least one of the other robot masters is weak against, Playing Mega Man 2 and Wood Man is giving you trouble? Take out Metal Man first and then use his blades to cut Wood Man down. This again is such a simple mechanic that can make or break your Mega Man experience and at the same time enhance it by increasing the difficulty by using the less effective weaponry or ignoring them altogether by using nothing but Mega Mans trusty Mega Buster standard weapon.

The best part about retro 2D games is that they age 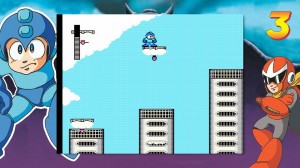 well. This is a fact commonly seen these days with the legion of retro collections and indie games of the same ilk. Most of these collections and modern/ retro games have the benefit of upping the computing power of the title, instantly polishing up the game so that simple glitches are fixed. The Mega Man collection does not do this, it takes the games you know and love and keeps them the way you remember them by including the graphical errors, glitches and general flicker that you would expect from playing it on an NES back in the 80’s. This could be a good or bad point depending on your feelings but personally I like it, it demonstrates well how the games were pushing the data envelope while allowing older gamers the ability to slip back into the game and play it as they remember. If you wanted to enhance the screen quality then you can, there are numerous views that you can utilise, you can add hand drawn borders, remove them entirely and play on a stretched screen or to really add to the nostalgia you can add scan lines to the sprites to recreate the days when CRT TV’s ruled the roost.

This extends to the music, keeping the same shrill 8 bit tunes which cuts out abruptly during busier scenes when enemies and projectiles fill the screen. The collection however does feature some excellent remixes of the classic game songs and fit really nicely into the overall collection as a homage to some of the greatest BGM’s in gaming history, I dare you as a returning player to go through Air Man’s stage without humming along to the stage music, I assure you it can’t be done. 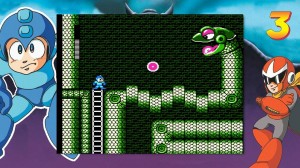 The gameplay itself still remains to be some of the most rewarding and challenging around. Very few games do run
, shoot, stop, and jump repeat well while keeping things fresh better than Mega Man. The only caveat comes with the method of emulation, due to the game being so faithful to the originals in terms of glitches and memory usage you will often find yourself getting frustrated with how some weapons work. Just remember that these games come from that bygone era where if you shoot a weapon with a long duration then you must wait until the projectiles have left the screen before you can switch the weapon and change things up. This particularly becomes a problem when you are facing the Wily tower in Mega Man 2 in the sentry turret room which requires precision and near perfect use of your items to get through. On the flip side however the pause glitch in Mega Man 1 is still usable in this collection, making the Yellow Devil a single shot kill!. Otherwise the run and jump game play is as precise as ever albeit with the ever so slight sponginess of the PS4 Dualshock control. 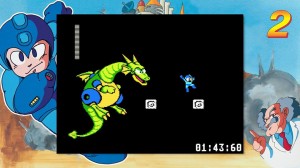 Aside from the main action there is a solid menu filled with extra pieces of artwork, music and challenges for you to partake in. The artwork is a fantastic look back into some classic character design and look like they were lifted from a colour instruction manual that used to be a stable inclusion in games of this era. The main attraction here is the challenges, short snapshots of gameplay which feature remixes and snapshots of classic moments in the six Mega Man games. These can range from making you beat a boss in a short time limit, clearing short level sections without being hit or the simply brilliant remix challenges which see you hopping between different levels across different games which reward returning gamers with extra challenge. There are over 50 of these challenges and they add a lot of replay value and an interesting take for those who love the series.

Mega Man Legacy Collection
8 Overall
Pros
+ Six Classic games rolled into one. + Excellent emulation, capturing the original feel of the games + Plenty of content to unlock and enjoy
Cons
- Not the most accessible games for new players to try - Some of the original glitches and limitations can get in the way of the fun - There could have been more.
Summary
The Mega Man Legacy collection is a solid compilation of the early days in the franchise. The game chronicles the gritty unpolished yet oh so good start to the optimised yet lacking later NES titles. This warts and all approach is incredibly refreshing take on retro collections and is an example of Capcom showing pride in their work. While there could be more in the collection, Mega Man X or Mega Man 7-10 for instance there is still plenty on show here to keep you going, whether you are new to series, returning to your favourites or settling old scores.