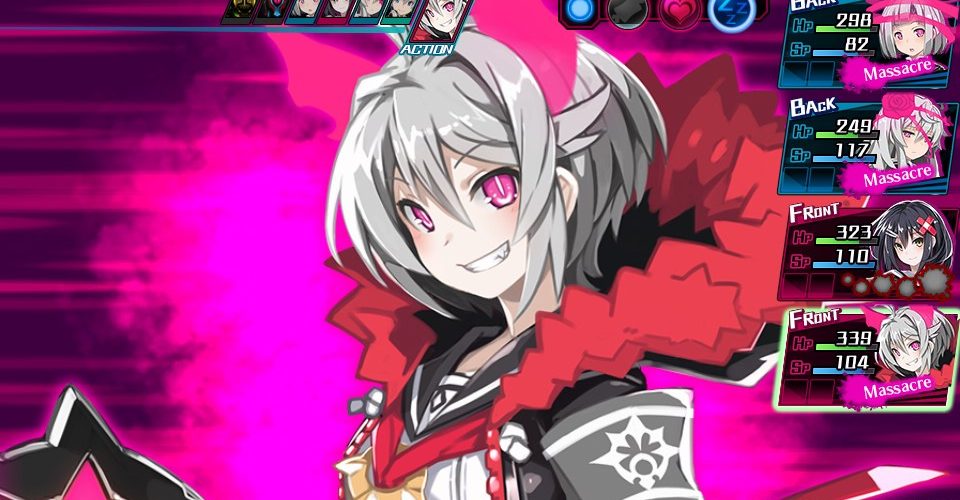 Compile Heart, probably best known for the Hyperdimension Neptunia series, have a new title on the Vita in the form of Mary Skelter: Nightmares. There are similarities with the presentation but it tries to do its own thing and mostly succeeds. 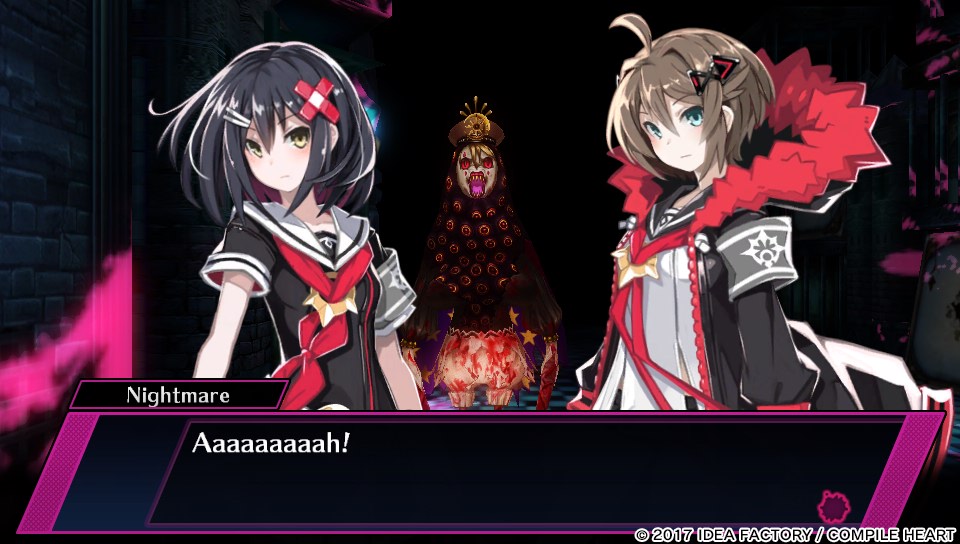 You play as Jack, a prisoner in the Jail, a living, breathing prison. Each day he and his life long friend Alice are tortured by the Marchens with only each other for solace. As the tortures intensify, one day a Blood Maiden named Red Riding Hood appears to free them, asking them to join the Blood Team who hope to escape the Jail for good. Blood Maidens are more powerful than regular humans and through contact with Marchen blood can grow stronger still. Alice too is a Blood Maiden and her close relationship with Jack means he’s brought along for the ride as well.

Turns out Jack is a Blood Youth, which is helpful as although contact with Marchen blood makes the maidens stronger it also corrupts them, eventually making them lose control. Jack’s blood can sedate them, bringing them back from the brink of insanity to continue the fight. This is a major plot point but also an important gameplay mechanic.

Mary Skelter: Nightmares is a dungeon RPG, similar to games such as Dungeon Travellers 2: The Royal Library and the Monster Seal or Operation Abyss: New Tokyo Legacy. As you progress through the story you’ll gain new characters, each named after fairytale characters (Jack and the Beanstalk, Alice in Wonderland, Red Riding Hood, Cinderella, etc.) and they’ll join your party to aid in both the exploration of the dungeons and in battles. Dungeons are explored from a first person perspective and you work your way through corridors filling out a map, avoiding traps, finding treasure and trying to find your objective. 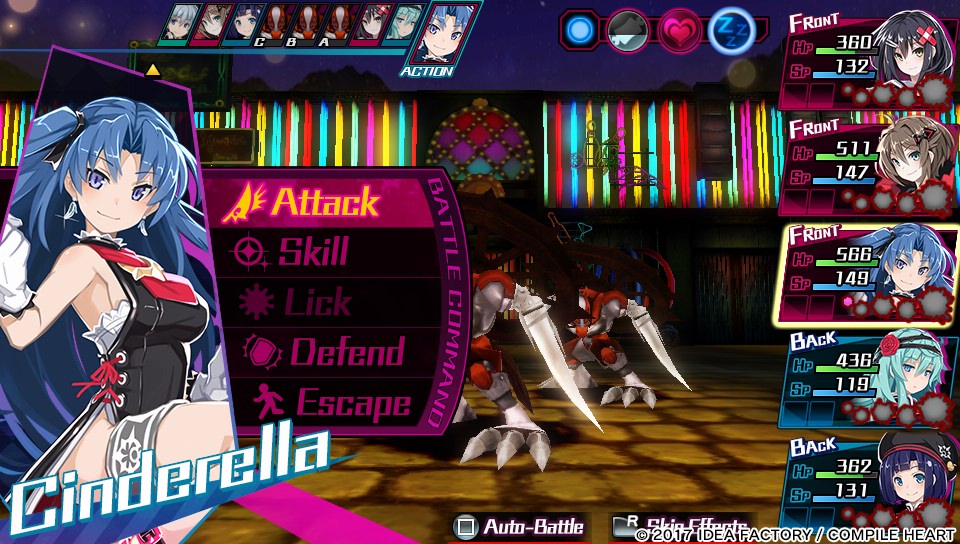 Battles occur in both set locations and randomly, though they aren’t too frequent as to become annoying. They’re turn based so once your character’s turn comes around you select an attack or ability and who to hit before the move plays out and the next person, friend or foe, has their turn. The only exception is Jack, as he cannot fight. Instead Jack can use the Mary Gun to fire his own blood at the Blood Maidens to keep them from succumbing to the corruption.

As you defeat enemies, hitting their weak spots or overkilling them makes their blood splatter on the Maidens. Once the blood reaches a critical point they enter Massacre mode which is good, it simply makes them stronger for a limited time and gives them access to some cheap, powerful abilities. If their morale has dropped too much from taking damage, indicated by the colour of the blood, then they’ll enter Blood Skelter mode instead. This is bad as although they become even more powerful you lose control of them and they attack teammates and enemies alike.

This mechanic elevates the battles from just being your average dungeon crawler. You’ve always got to be aware of each girls corruption level and you can’t just throw Jack’s blood around as he, like all of us, has a limited amount and must rest to recover or risk fainting and being out of action for multiple turns. You can treat it as a risk reward mechanic, as Massacre mode is certainly helpful, but if you’d rather each girl can also ‘Lick’ another to activate a buff at the cost of all their blood meter. Juggling all of these will make both the fights more entertaining and make your life easier once you get the hang of it.

As you move through a dungeon the Jail, as it’s alive, has three desires. Fulfilling these desires – hunger, libido and sleep – will grant you a little bonus. A nice idea but you’ll eventually grow tired of the bonus wheel appearing a slowing your progress as it happens a little too often. It’s not even like you’re going out of you’re way to fulfil these desires, it just happens naturally as you explore so it’s just something that happens to you rather than something you actively look out for. 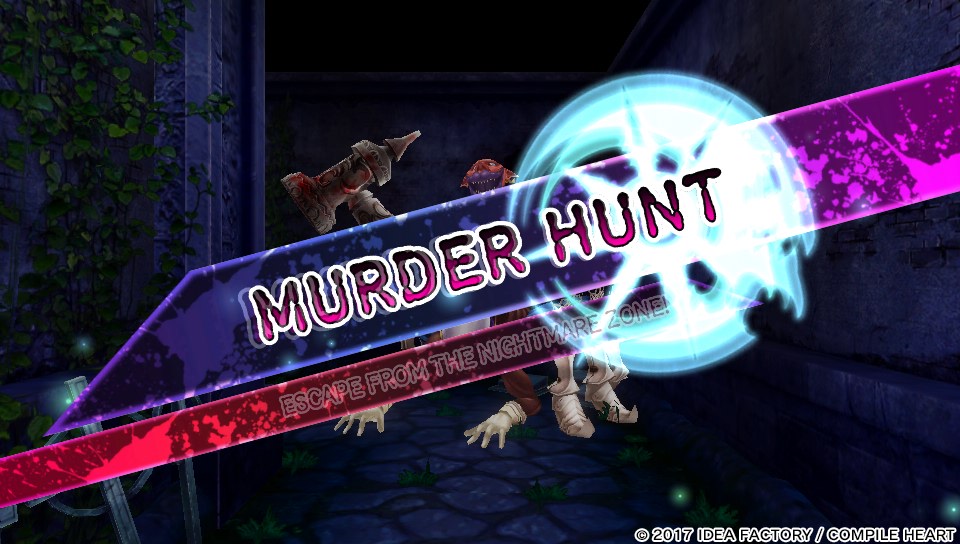 The other unusual element are the Nightmares. These are creatures that will stalk you through the dungeons and, until you reach a certain point in that dungeon, are invincible. As you wander around the area will turn dark and then you’ll see the Nightmare appear, and they’re generally well designed monstrosities, who then start to chase you down. You lose your mini map whilst being chased so you’ll be running blindly away hoping to open up enough distance to lose them. If you get caught in a dead end you’ll have to initiate battle in the hope of knocking them down and running past them. Initially it can be quite alarming but there can be long periods when you don’t see them and if you get a decent path then you can lose them within seconds usually. Still, a nice idea.

Playing on Normal I didn’t find the game to be too troubling. There are higher and lower difficulties, the higher ones rewarding you with more experience if you take them on. That’s not to say it was easy, especially before you’ve got a full team of characters, but compared to other games like this I’ve experienced there are fewer, less brutal difficulty spikes requiring grinding all the time which seem more common than not in this genre. You can change the difficulty at any time if you’re feeling the level is not quite right too.

Outside of the dungeons you have some management options as well as a couple of other distractions. You can increase your social bond with each girl by giving them gifts, although this can be easily manipulated and rushed by buying cheap gifts and just giving each girl the same one over and over again. You are rewarded with some extra scenes for doing so. You can also purge corruption on each individual girl which gives them a boost in the next dungeon at the cost of some of Jack’s blood. This, the first time at least, involves rubbing the blood off an image of the girl using the touchscreen as they’re wearing less clothing than usual. If you rub enough even those clothes vanish to reveal smaller garments again. I get why it’s in here but it’s a little out of place. Once you’ve completed the mini game with each character once you can skip the rubbing part and just get the bonuses which is great. 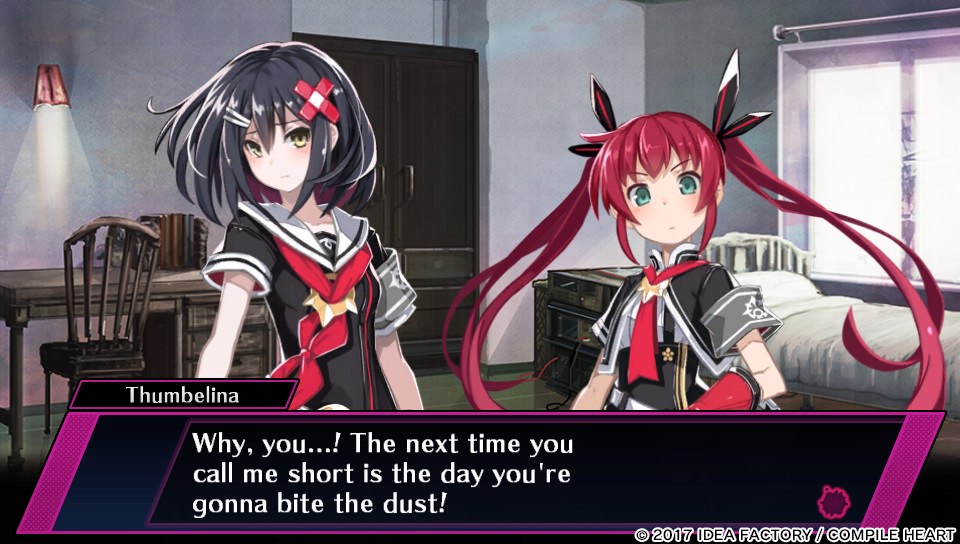 You have a shop to buy and sell items, a place to get and turn in quests, a gear workshop where you can spend blood (a currency of multiple types) to upgrade weapons and armour, you can change class and lower your level. Lowering your level will allow you to get more CP which lets you unlock new abilities and level them up, it’s not necessary but for those looking to max out your characters this’ll give you the option. Changing a character’s class (each character has five) gives you some different passive skills, but you can actually keep any ability you’ve unlocked on any class which allows you to truly make your own hybrid characters. Their portraits also change depending on the class which is a nice touch.

The presentation in general is very nice. Character portraits are 2D but drawn really well with mouth movements which is something you don’t always get. The dungeons are always hallway based, whether the walls are made of concrete or bamboo, but the 3D visuals are varied and all the enemies are fully modelled and animated as well which is uncommon but really elevates the presentation. Music was decent whilst not standing out and what little voice work there is is fine in an anime voice over way.

This review has been quite positive and I did end up enjoying it after a slow start but it isn’t perfect. I dislike the writing a lot. The story itself is okay but the characters and conversations don’t feel natural at all and lack a lot of personality beyond their most basic traits. Coming straight off the back of Danganronpa V3 the difference is night and day. The dungeons quickly become very large and labyrinth like which, thanks to the ability to save anywhere at the cost of one MP, is fine but you can be running around the same area for a long, long time, filling out the map. As you are in a dungeon then chances are you’ll fill out your inventory too which maxes out at ninety-nine but this includes everything. There are loads of different consumable items which makes the largest dent meaning you’ll be returning to base (again you can do it anywhere for cheap) regularly to store stuff away or sell it. More space would have been appreciated. 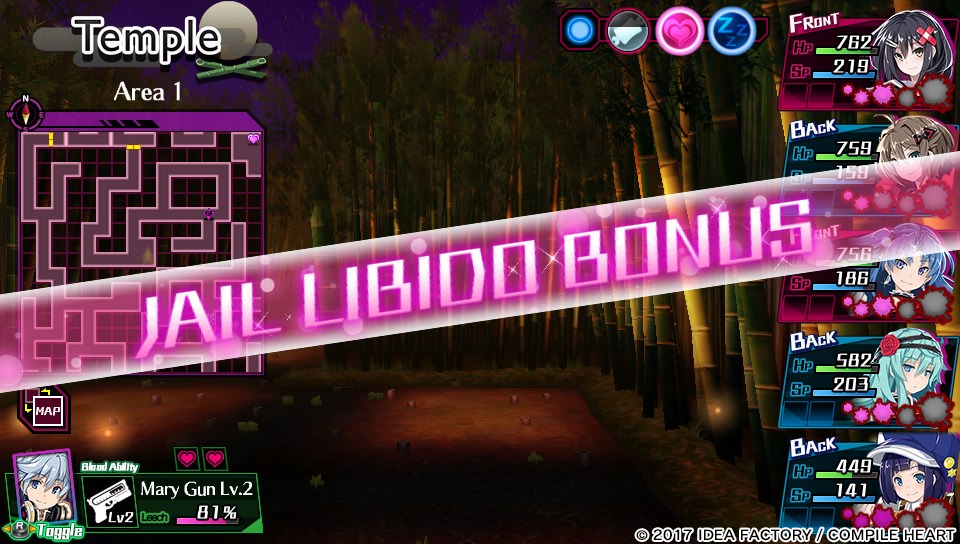 As a dungeon RPG Mary Sketler: Nightmares is actually up there with the best I’ve played on the Vita. The characters and story let it down for me but the actual playing of it is enjoyable with plenty of options to set your squad up how you want it. The difficulty is set just about right so you’re not getting hung up on one specific section and the presentation has been given a level of attention I’ve not seen in a while on the system. The fanservicey parts will still put off some but they’re not as in your face as other titles which might be a negative to others but as a whole package it’s an enjoyable experience.

Mary Skelter: Nightmares
8 Overall
Pros
+ Mechanics make dungeon exploration fun
+ Some great visual presentation
+ Plenty of customisation for your party
Cons
- Story and character sequences are poor
- Inventory management gets in the way
- Some ideas don't work as well as intended
Summary
Mary Skelter: Nightmares introduces some interesting mechanics to the dungeon RPG formula to separate it from the crowd. The story and characters aren't great but the exploration and party management is fun enough to still make this worth a look.