RUINER is the debut title by Polish dev squad Reikon Games and it combines twin-stick shooting with a cyberpunk aesthetic, which is a combination that PS4 gamers, and reviewers, are more than familiar with.  The game stands out though thanks to developers’ commitment to the Blade Runner-esque style of the game world and the sheer confidence with which it is delivered.

You play as a man in a mask.  The mask has an LED screen which projects messages – more often than not these are murderous statements – and in his ear is a hacker simply named ‘Her’ who guides you through the game, at least after the tutorial where you are being convinced to kill someone for some unseen reasons.  The game takes you through the gears as it shows you movement, melee combat and your special abilities before eventually giving you access to firearms. 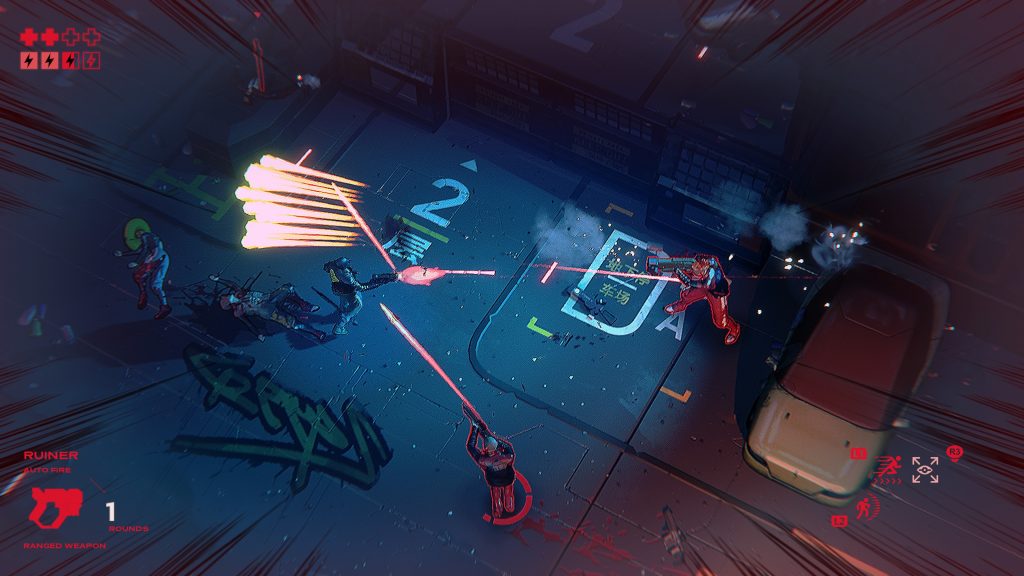 As RUINER progresses, you gain karma which levels you up and gives you access to new abilities.  These range from an initial dash and shield combo to improved ammo consumption, the ability to hack enemies, area of effect attacks and more and, thanks to a very smart bit of game design, you can respec your abilities whenever you like.  So if you’re finding yourself overwhelmed by enemy traps, you may want to beef up that shield but if your problem is with the enemies themselves, maybe the ability to slow time will be a bit more useful.

The variation works well and adds some tactical depth to what would otherwise be a fairly straightforward shooter.  The core game mechanics however do not deviate much from the usual formula of walking up and down corridors and getting ambushed.  That said, the range of weapons on offer is generous and, with ammo in fairly short supply on each, you’ll be finding yourself using different weapons all the time.  Between that and some melee combat too, the shooting action is good here. 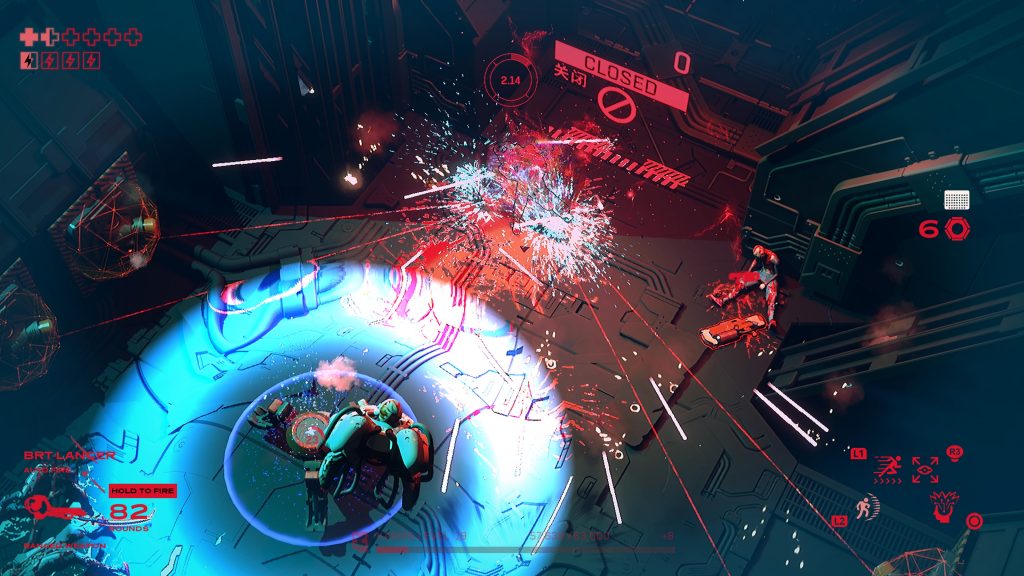 Where the game lets itself down is with the difficulty.  On Medium the game is a challenge and some sections are miserable.  Drop it down to Easy (which you can do at any time, you can also go up in difficulty if you’re some sort of Billy Mitchell of the shoot ’em up world) and you’ll have a much easier time but it is maybe a tad too easy.  There’s a sweet spot that RUINER doesn’t land on and that’s a shame but there is enjoyment to be had on both Easy and Normal for sure.

The other problem is that the enemies you tend to arrive all too slowly.  When they are on-screen they are frenzied killing machines but you’ll only really be facing a handful at anytime which makes the action a little less exciting.  You’ll be frustrated also if you’re trying to keep you kill combo going. 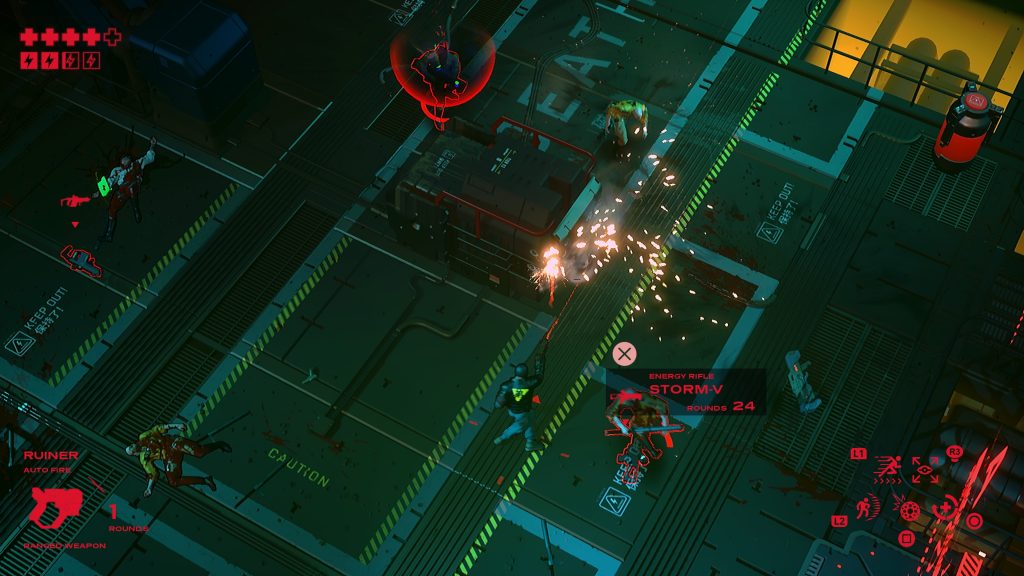 The reason for this is probably to help temper the difficulty but also to keep the on-screen action from getting too frenzied.  The game uses an isometric viewpoint and is fairly close to the action.  This looks great, especially with the dark red and black colour scheme that the game often employs, but it can make it harder to react to enemies who either spawn too near or are obscured by all the dark details of the levels.  A Diablo/Nex Machina style outline helps you to pick them out but we’d have liked a slightly better view of the battlefield.

Initially, the game wasn’t clicking with me.  I wanted to like it but the sameyness of the levels and way that the action is punctuated by periods in the game’s city-based hub area which just involves talking to people meant that I began to get a bit bored and frustrated with the game.  However, when I started to understand the upgrading system, and had a few skill points available to play with, the game began to feel enjoyable. 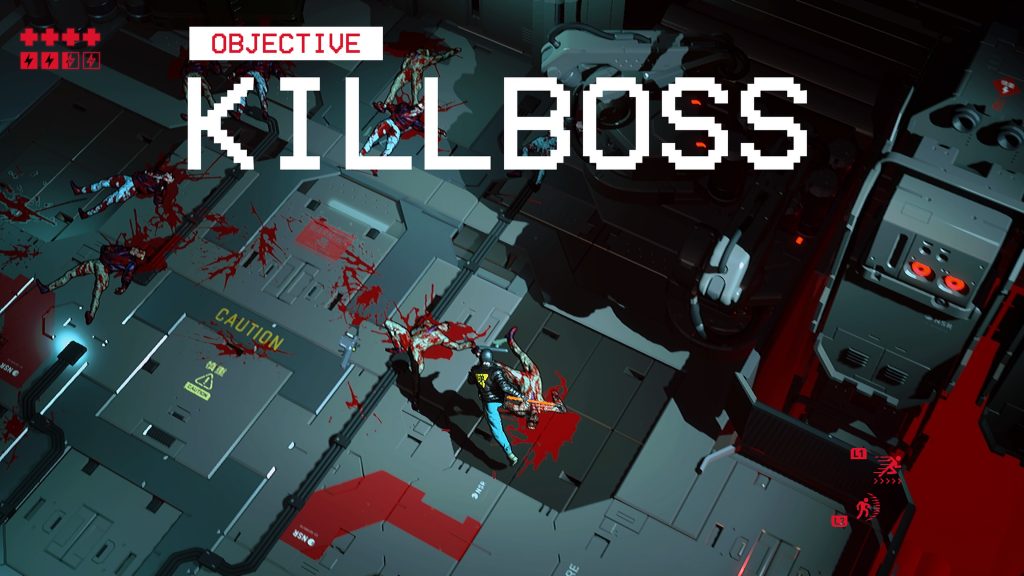 I did find it hard to engage with the story, especially as it as told in text form, and by the end I was just looking to get through the levels.  I’m really not a fan of games that allow you to talk to dozens of NPCs who offer nothing to the story or gameplay but are still selectable.  But when the game is throwing multiple enemies and security systems at you, and you’re countering with dashes, shields and a bit of mind-control while cleaning up with your favourite weapons, RUINER really delivers an great shooting experience.

Nex Machina is clearly the closest peer this game has and RUINER doesn’t quite match it in terms of level design and core gameplay but it brings an atmosphere and charm all of its own.  The isometric viewpoint and dark synth soundtrack matched with the nihilistic characters and fully-loaded shooting does make for a good game.  It’s just a little bit of good level design, and maybe some voice acting, away from being a classic.

RUINER
7 Overall
Pros
+ Striking visuals with a great cyberpunk aesthetic
+ Good shooting action that improves as the game goes along
+ Smart upgrading options
Cons
- Very repetitive and basic level design
- Story isn't delivered particularly well
- Difficulty settings are a little too far apart
Summary
As striking as RUINER is with its bold visuals and violent gameplay, the effect initially wears off pretty quickly thanks to some very repetitive level design. Stick with it though and the game's varied arsenal and multitude of upgrading options give it some depth and make the core shooting action stand out from the crowd.