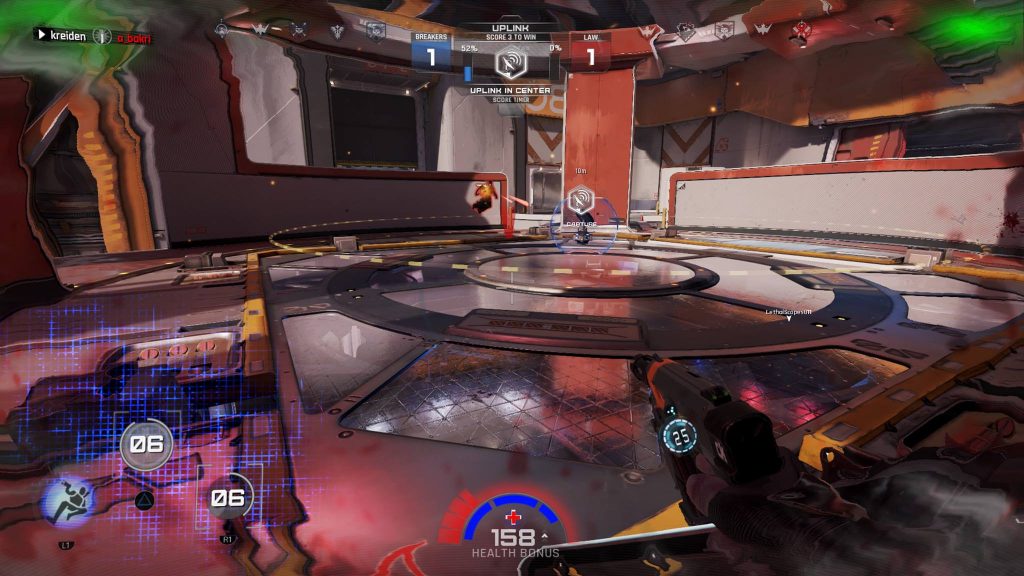 One of the most annoying things for me in the previous generation of consoles was the advent of ‘realistic’ first person shooters. I mean fine, they have a place and a lot of people prefer boots on the ground warfare, but for me, first person shooters shine when they don’t take themselves too seriously and when they have an air of escapism. Games like Quake come to mind when discussing this topic, but as a chief example my go to was always Unreal Tournament. It was fast, reflex driven and most importantly fun.

Lawbreakers is the latest lovechild of Cliff Bleszinksi and with this, the aim is to bring back that fun, familiar Unreal Tournament gameplay style and mix it with the character lead esports bothering variety from the likes of Team Fortress 2 and Overwatch. The package on offer at launch is a pared down and focused affair with only eight maps, five modes and sixteen characters to play with. It may not sound like much but at half the price of Overwatch at launch I can give this a pass somewhat. 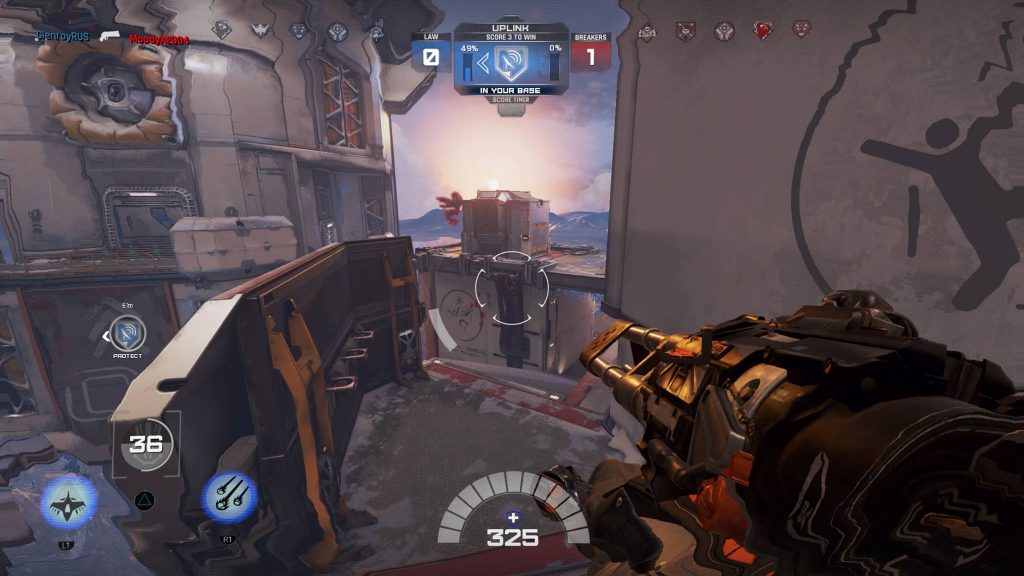 Lawbreakers as another character driven arena shooter wouldn’t fare well on its own though, so there needs to be a key differentiation to make it stand out and this comes in the form of the anti-gravity balls that exist in each map to change things up. More than just your garden variety UT mutator, these can entirely shift the course of a map and create some intriguing firefight situations as instead of the periphery you must worry about attacks constantly from every given direction. The game also encourages as much exploitation of this mechanic as you can muster mid game also, I found myself using entire buildings as makeshift cover while I grappled around them using the left trigger ability for the assassin class. Likewise with the Wraith class i was able to abuse the slide ability to gain extra momentum before jumping to reach heights at a more than a casual speed.

Much like the arena shooters of old, Lawbreakers is a fast-paced game. Unlike Unreal Tournament and Quake III, you do not traverse at break neck speeds by default. It is up to you to figure out the best ways to make use of character to gain momentum. Depending on which avatar you pick this can be achieved in many ways, for example the Gunslinger hero class can use a short-range teleporting device with limited charges to hop around the arena, The Titan class instead makes use of the ability to shoot backwards over the shoulder to use their weapon to propel them forward. This speed gain is crucial to your success and becomes a game in itself while also setting the stage for some stylish anti-gravity acrobatics. It’s a hell of a lot of fun to use, if something that takes a lot of getting used to.

This speed plays into the five different modes that Lawbreakers offers up. These mostly play on a capture the flag or king of the hill style gametype but there are key differences that make them stand out. For fans of Unreal Tournament 2004 in particular, they will find the Blitzball mode, which is basically Bombing Run for those that remember it. I spend most of my time playing this mode for this reason as there is a real sense of desperation that sets in when the enemy team has the ball and likewise when you are running with it. The in built shot clock means that noone can simply hide with the ball and forces teams on the offensive, which makes for some great action. All the while the ball shouts at the teams in the voice of Justin Roiland of Rick and Morty fame.

Other modes include Uplink, which sees teams battling for a battery in the center of the stage. This is basically a mixture of capture the flag and king of the hill in one as the enemy team has to try and take the uplink before it is able to upload its data. Again this is another mode that does a great job of expanding on Lawbreakers strengths by forcing both teams to fight aggressively. 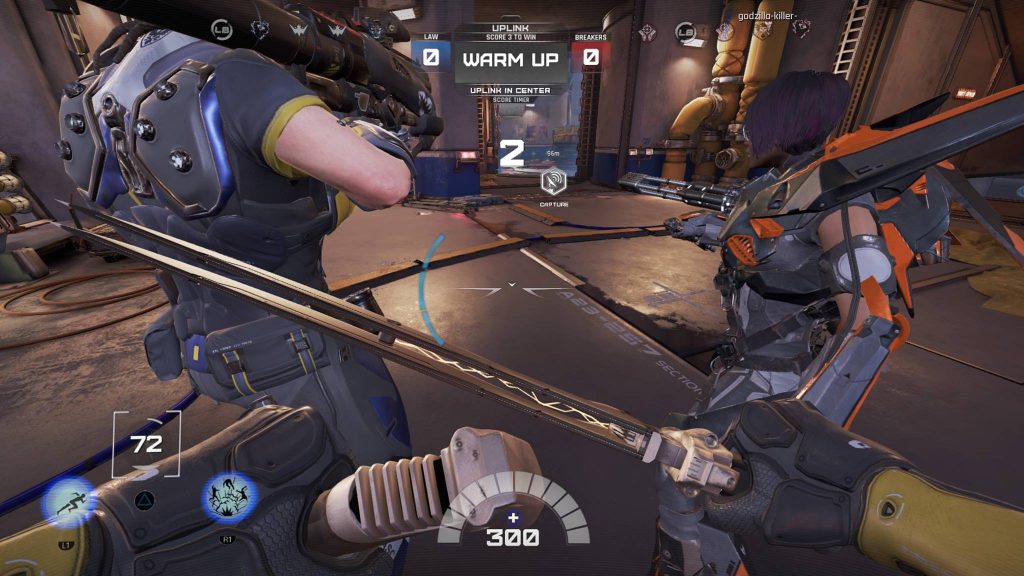 What doesn’t necessarily play to Lawbreakers strengths is the questionable map called Redfall. This map is designed to be a boots on the ground, no bullshit kind of experience as it eschews the low gravity zones in favour of a grounded style. But in a game that has the subtitle “Gravity defying combat” it stands out the worst of the eight initial battlegrounds. It feels like it undermines the USP somewhat and just does not feel right in environment rotation.

My biggest complaint with Lawbreakers is not entirely the fault of the developers but a big minus. Due to the limited playerbase, it can often be difficult to find games unfortunately. This results in lengthy stays in warmup sessions with some games taking almost twenty minutes to load up because of the player capacity not being reached. This will hopefully solve itself over time, but as a fresh game out of the gate, it’s hardly encouraging. Especially when player numbers are around the same level as those seen in similar titles such as Battleborn.

Gripes aside, there is still plenty to like about Lawbreakers. The price point and content at the beginning are perfectly fine and the game is great fun to play. Only time will tell whether early adoption will be paid off however, especially when you consider a smaller than hoped for userbase. Here’s hoping that this game can be improved and expanded upon down the line.

Lawbreakers
7 Overall
Pros
+ Traversal and speed is a lot of fun to figure out over the several characters
+ The gravity field zones make for some interesting gameplay during firefights
+ A good range of characters with roles that will suit everyone.
+ Justin Roiland as the Blitzball.
Cons
- Lootboxes rear their ugly heads again.
- Not quite as pure as the classic arena games
- Due to the playerbase, it can be hard to find games.
- The characters lack personality.
Summary
Lawbreakers is a fast and frantic callback to the days of Unreal Tournament and Quake III mixed with the likes of Overwatch for good measure. It may lack the balance of its contemporaries but it makes up for this with solid, fun shooting and momentum based speed.