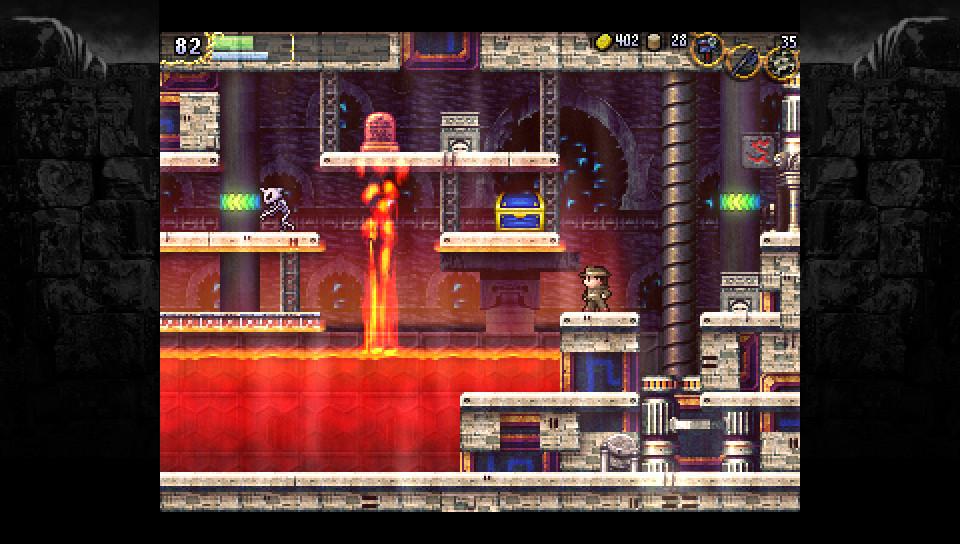 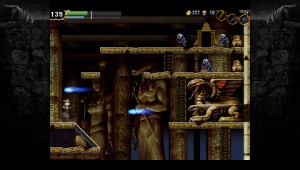 La-Mulana EX is a Japanese indie game that has existed in multiple forms from as far back as 2005. Inspired by old school 16-bit style games and earlier where difficulty was king it has obviously done well since it’s still being ported to systems ten years after its creation but is it worth your time in the space year 2015?

Like a blend of Metroid and the old Castlevania games (a Metroidvania if you will), you get to explore La-Mulana as Lameza, an Indiana Jones style archaeologist who starts with only a whip and the ability to jump. You gain new weapons, items and abilities as you progress either by finding them or buying them from shops littered around which will help you to survive and in some cases allow you to progress.

The way Lameza controls is very deliberate. Once you jump you’re locked in as there are no air controls (unless you jump straight up in which case on the way down you have full control), if you get hit you get knocked back just like in the days of old (particularly annoying when you’re trying to platform I’m sure many will remember) and your attacks vary in speed and power depending on what weapon you’re using.

Regular enemies can be taken out relatively quickly and only do minor damage to you but it all adds up. There aren’t many ways to heal yourself in the dungeon, with only healing springs acting as a reliable source which aren’t common, although you gain the ability to warp between save points early on which means you can always get to one. You can also collect experience dropped from enemies which fully heals you once you’ve collected enough but isn’t something you can rely on in a pinch.

The bosses are very fun in an old school way, learning their attacks and patterns and finding the openings to get your attacks off. La-Mulana EX isn’t an easy game but when it comes to gameplay it’s an enjoyable difficulty where you can learn and get good enough to overcome obstacles. 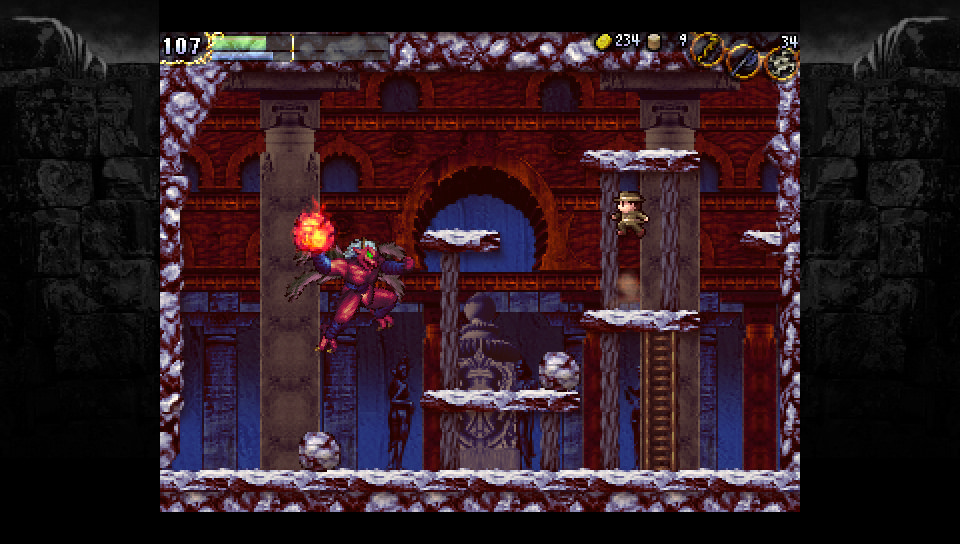 Unfortunately the same can’t be said for the puzzles. Pretty much every screen in La-Mulana EX has a puzzle to solve, sometimes it’s simple like press a switch and it’ll open a chest for an item or open a door, other times you have to press a switch in one room which reveals a switch five rooms over which drains water somewhere else which allows you to gain access to a wall which you have to destroy by hitting with your weapon which gets you access to another switch, but don’t press that one yet as it’ll kill you instantly with a trap, first you have to press a switch in a completely different zone which makes that switch safe and allow you to progress. Across an invisible bridge or something.

In fact that second type of puzzle seems far more common that the simple ones or at least they are the ones that have left the greater impression on me. There are tablets dotted around the environments that give you clues to the puzzles but a) they are super cryptic sometimes and b) the clues aren’t necessarily anywhere near the puzzle they relate to. You can generally go in multiple directions at any given time also which should be applauded but doesn’t help when you’re not sure if you can actually solve a puzzle yet or not. Luckily as the game is so old now there are resources out there to help you along but that’s not really the way I wanted to play the game however if I wanted to make any real progress (especially in a timely fashion for a review) I didn’t really have too much of a choice.

Graphically I can’t fault the game with its 16-bit style visuals depicting varied environments, enemies and large bosses and the music pushes all the right buttons for people who played games from that era. In fact the entire package is very well done and also of a very generous length, even the puzzles which I don’t enjoy are obviously made the way the developers wanted so kudos is deserved for an excellent overall package. 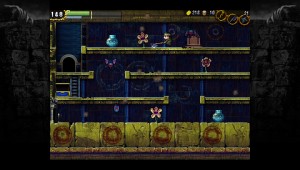 Ultimately there’ll be a small percentage of people out there who will absolutely adore La-Mulana EX and the way it goes about its business. The gameplay is solid, music is great and there is a hell of a lot to see so there are no problems there. It’s in the puzzle system that people will either find their perfect game or tedium. Unfortunately I fall into the latter category which is a shame as I’ve had my eye on La-Mulana for a few years and I don’t shy away from difficult games, but I’m more of a using skill to overcome difficulty rather than bashing my head against puzzles kind of guy.

La-Mulana EX
6 Overall
Pros
+ Enjoyable gameplay + Excellent old school music + Tough boss battles + lots of content
Cons
- Puzzles are too difficult - Certain control quirks are detrimental
Summary
Ultimately there'll be a small percentage of people out there who will absolutely adore La-Mulana EX and the way it goes about its business. The gameplay is solid, music is great and there is a hell of a lot to see so there are no problems there. It's in the puzzle system that people will either find their perfect game or tedium.