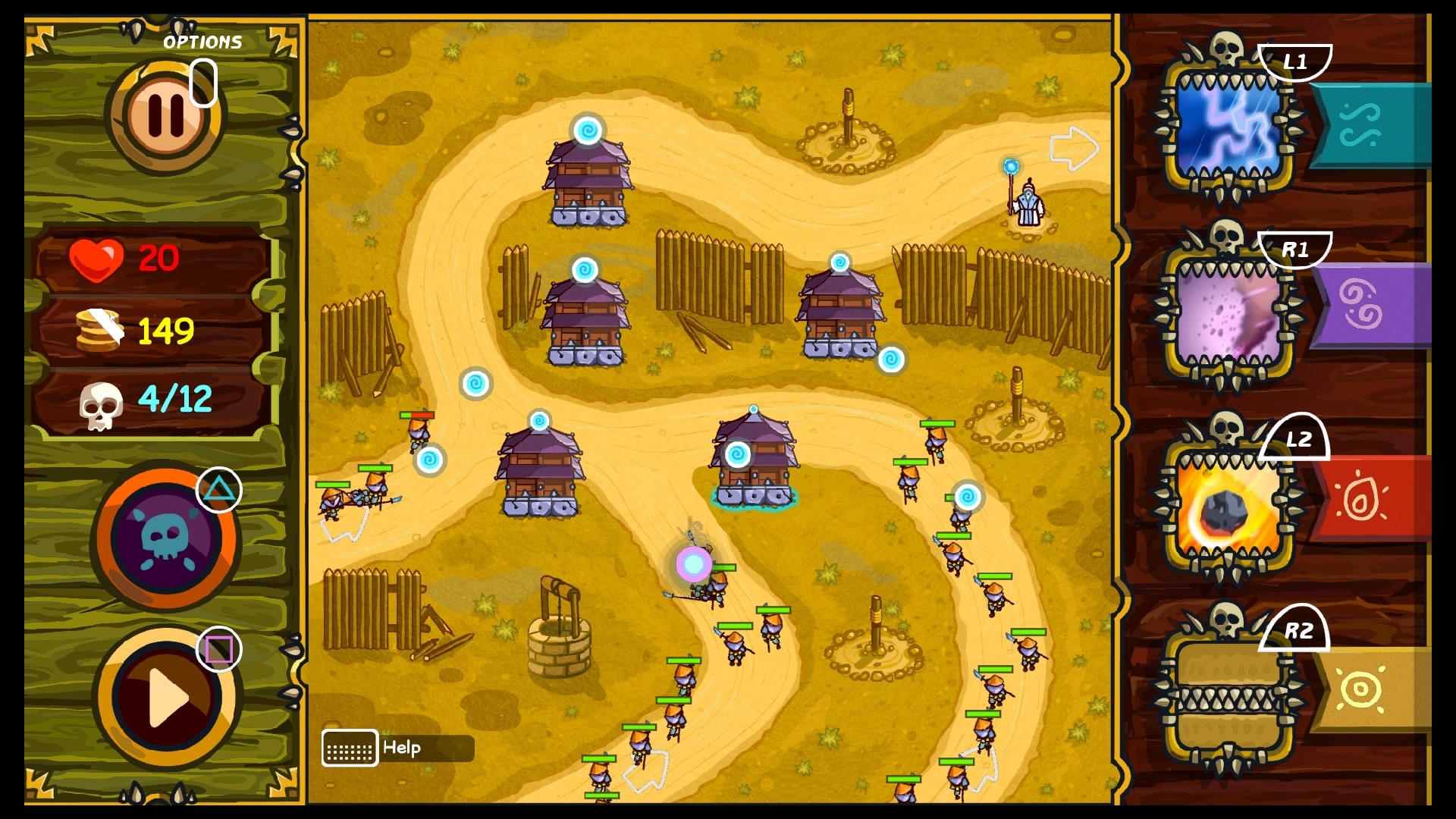 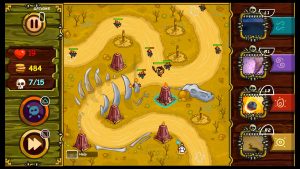 Games come in all shapes and sizes and for every sprawling 100 hour narrative epic you’ve got the exact opposite in a short arcade like experience.  The Keeper of 4 Elements is resolutely in the later camp.  The developers Char Studio have used their experience with mobile games to create a tower defence game for the PS4 and its now time to see if it is any good.

If you’ve ever played a tower defence game you’ll know the score here as The Keeper of 4 Elements does very little to deviate from the norm.  For those of you that haven’t played one before it is a really simple genre, but one with a fair bit of tactical depth once you get into it.  The game plays out over a number of single screen maps, each map has a pathway which winds across from one side to the other.  Enemies will march down this pathway in an attempt to get to your side of the screen, let too many through and you’ll lose the game.  In order to stop these bad guys you can place towers which will attack them as they walk past.   Each map has limited locations in which to place a tower and as the towers cost gold to build or upgrade the game comes down to balancing your money with the need to build more towers.

You can build four flavours of towers one after each element, each one has different stats associated with it.  At the heart this is a number crunching game as there is no direct control over your attacks, instead you’re looking to maximise the damage per second you can inflict.  Given this you’ll be placing your towers at intersections to hit the enemies as they walk all the way round you and making sure you get the most from each tower.  To complement your towers you’ve also got four themed super powers which will damage or otherwise obstruct your enemies.  If all your careful planning goes to waste you’re finally left with your monk who sits at the end of the pathway and zaps the baddies as they pass him. 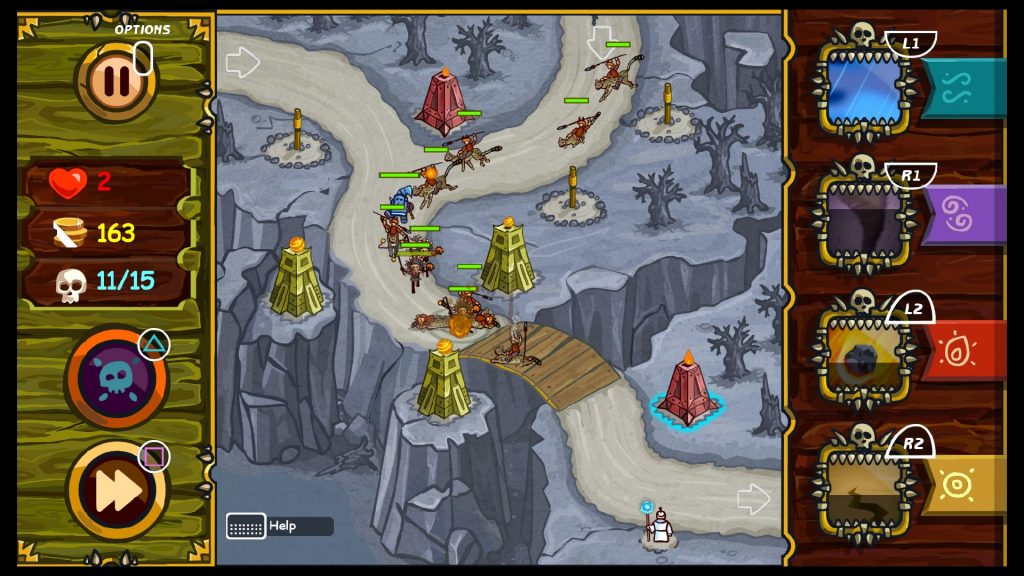 There is a wide selection of enemies on offer here from the standard grunt through to the bigger giants and the game constantly mixes up how these are thrown at you.  The game also isn’t shy of throwing loads of baddies at you with some of the later levels throwing what looks like hundreds of baddies at you.

The Keeper of the 4 Elements has 15 levels to play through and each level can be completed on easy, normal or hard mode which adds a nice challenge to proceedings.  Completing a level will grant you a star which can be used to permanently upgrade your towers, super powers or monk.  The absolute best thing about this power up system though is the fact you can reallocate the stars whenever you want, effectively giving you the ability to customise how you play.  Replaying the earlier levels to unlock all the stars is an absolute must as this gives you the added edge for the tougher levels, and boy do the levels get tough later on.  And this is something you’ll be doing a lot of as the game has that uncanny ability to draw you back for one more go, it really is a time sink.

Visually things look ok but it is very reminiscent of a mobile game with clear chunky graphics and menus.  This is likely due to the developer’s mobile heritage but is no bad thing, just don’t expect it to be fully harnessing the power of the PS4.  Unlike some other mobile style games there is not a whiff of in app purchases and this is a very good thing.  I’ve played too many games on the PS4 which you just know have been built to facilitate in app purchases. 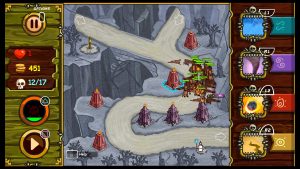 The overall experience of playing The Keeper of the 4 Elements is ok if a tad forgettable.  It plays a decent tower defence game and offers a good level of difficulty for the later levels.  There is a decent degree of replayability on offer too as you’ll be wanting to go back to clear the earlier stages to fully upgrade your kit.  But that’s sort of it, there is nothing else to it.  However with little else to challenge it on the PS4 this is also certainly your best bet for a tower defence game.

The Keeper of 4 Elements
6 Overall
Pros
+ Plays a decent tower defence game + Has a decent level of challenge to it + It is very easy to pick up and play just one more time
Cons
- Visually looks like a mobile game - Does nothing to shake up the tower defence genre - Is easily forgettable
Summary
A by the numbers tower defence game which only stands out on the PS4 due to lack of competition. It plays a good game though and has a decent level of difficulty. Unfortunately, it is forgettable and looks very much like a game you'd find on your mobile phone.