We reviewed the PS4 version of Jydge back in 2017 and it turned out to be a real hidden gem.  It was a twin-stick shooter with an emphasis on weapon and character upgrades and it benefitted from some truly excellent level design.  In going for the platinum trophy we really dug deep into the game and actually it ended up being one of our favourite indies of the whole generation.  So we were thrilled to see it pop up on the PS5 store as a legit launch title and even more thrilled when we realised that meant a whole new trophy set and therefore a reason to replay the whole game.

For the uninitiated, Jydge was the third game in a series of four twin-stick shooters from 10TonsLtd.  The first was the excellent rogue-lite Neonchrome which was followed by the mediocre time-bender Time Recoil and the unofficial quadrilogy ended with the spectacular shooter Tesla vs. Lovecraft which hopefully is due a PS5 upgrade too.  Each game was different in approach but shared a visual style and the basic twin-stick shooting core mechanic. 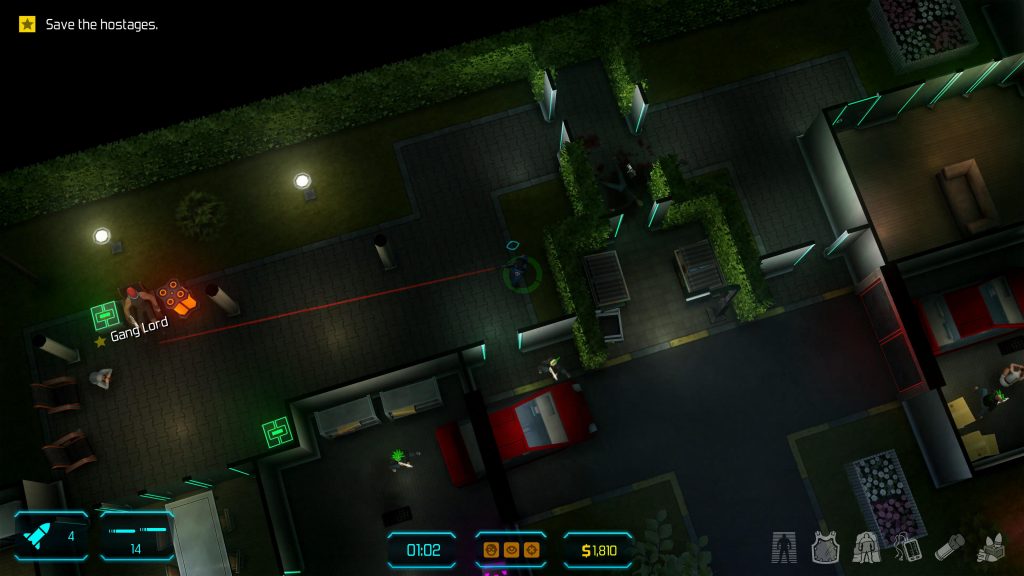 What set Jydge apart was that the levels were short, well-designed affairs where you, the titular Jydge (a homage to 2000 AD’s Judge Dredd) would enter by car, clear out the level objectives and then leave.  As judge, jury and executioner this meant you had free rein to kill the bad guys while taking on a main objective which was backed up with two other challenges.  So, for example, the aim of the level might be to rescue the hostages but the other challenges may be to kill all enemies in the level, loot all the containers, beat a time limit, don’t get hurt or spotted and so on.  After a while you unlock harder difficulty levels and these come with different challenges on the same stages.  So where previously you may have gone in with the objective of killing a high value target and escaping in 20 seconds, the next time you might have to stealth the whole level or do it melee only. 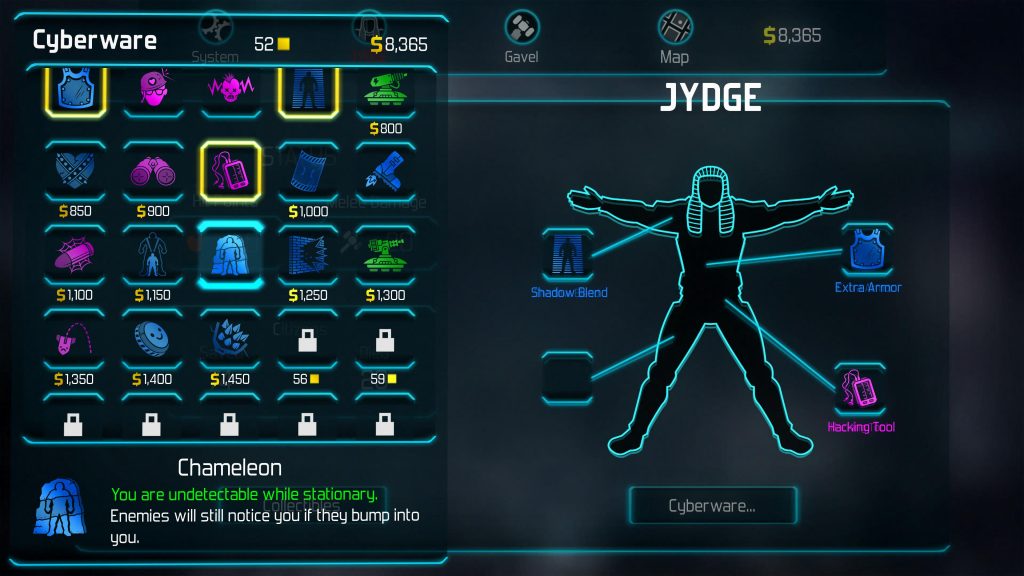 As you kill enemies, loot containers and complete objectives, you’ll earn money and this can be spent on upgrades for your Jydge and equipment.  The upgrades are numerous, allowing you to focus on speed, strength, endurance, stealth and many other aspects of your character.  You’ll need to switch these around too depending on what challenges you are facing.  You can also upgrade your ‘Gavel’ which is your gun, switching primary fire types from basic lead bullets to reflective lasers, ion charges, sniping and way more other options than you can list here but you can also upgrade the gun’s capacity, fire and reload speed and melee effectiveness.  And the same goes for your powerful secondary weapon too.  Admittedly, we stuck with missiles for most of the game but some challenges did require something more subtle.

The depth of this system is the sort of thing that 10TonsLtd are the masters at and it makes the game so much more compelling than if it was a basic shooter.  When you combine that with just how tightly designed the levels and challenges are, it makes Jydge a really engaging game and one that offers quite a lot of content, even if the levels are recycled a few times.  Beating a level in 14 seconds when the challenge target is 15 remains a legitimate thrill.  And Jydge also excels when it comes to the action.  Whether you are sneaking around stealth-killing perps or blazing through a speed run with everything you’ve got, the combat is satisfying and exciting.  The levels are mostly destructible too which means you can blast through walls to get to your target differently to how the level first presents itself. 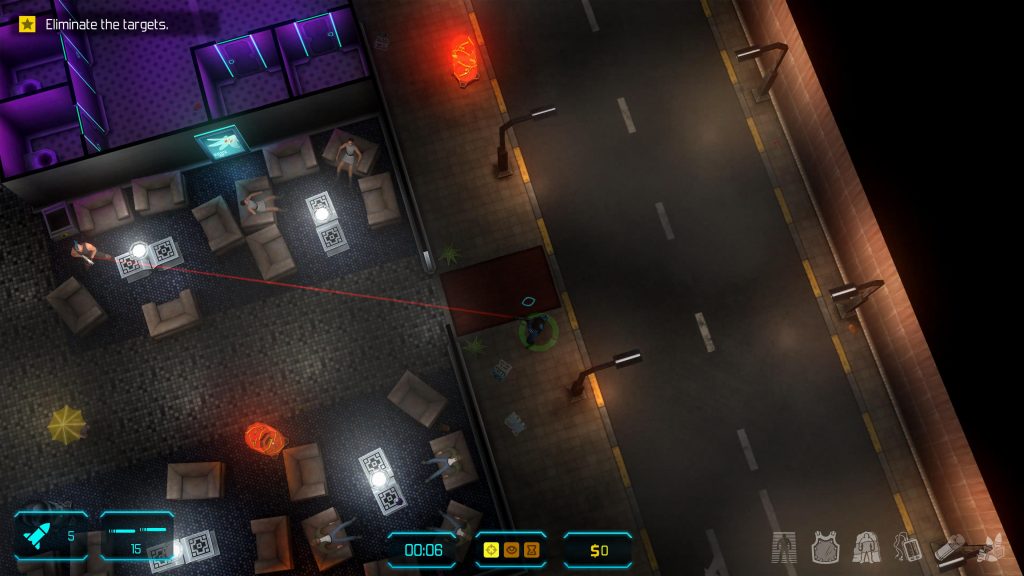 As with our previous review, the only real knocks on Jydge as a game are in the presentation.  The main visuals are a bit drab with lots of bleak future settings and muted neon colours.  They’re perfectly functional though and so planning your way around a tricky level is easy to do but the PS5 upgrade doesn’t improve this at all and the game looks just as it did before (although we’re assuming the frame rate is better but we never noticed any frame rate issues before).  Also the music is a varied mix of tunes from many different genres but a lot of it sounds like generic public domain music and you can’t seem to filter out the songs you don’t like from the playlist.  The sound effects fair better though with big explosions and adequate other sounds and voice samples.

As much as we are loving playing Jydge all over again, the only real benefit to the PS5 is in the loading times.  Disappointingly, there is no vibration on the controller which means the fancy DualSense is very underutilised.  We would have liked to have seen an upgrade there as that would have really made this version stand out.  But, as before, we still love Jydge a lot.  It’s exactly the sort of thing we like.  Lots of action, lots of upgrading.  Hopefully, a generation of PS5 owners will spot it in the limited list of actual PS5 games and will give it a go because it deserves an audience and the cheap price means it is worth a punt.

Jydge
8 Overall
Pros
+ Great action
+ Deep upgrade system
+ Loads of replayability
+ Perfect level design
+ Free upgrade to owners of the PS4 version
Cons
- Loading times aside, it doesn't really use the PS5's features
- Drab presentation
Summary
Jydge remains one of the best tactical shoot 'em ups to hit PSN and is as much a joy to play as it was in 2017 but it does little to leverage the power and features of the PS5.