This week’s Ratalaika effort is Bone Marrow, a puzzle game from Russian coders Huge Pixel.  This one is a mixture of RPG stylings and modified 2048 gameplay.  That’s the puzzle game that dominated everyone’s attention on mobile a few years back, with every uninstall being an effort to try to claim your life back from it.

To understand Bone Marrow, you need to understand its main influence.  2048 was a game where you had numbers on a grid and you’d need to smash together matching numbers to double their values.  Put together two twos and you get a four.  Two fours give you an eight.  You get the idea.  Eventually you’d be trying to get those two 1024s together to make a 2048 to mash together with the one you’ve got over there in the corner.

Well, Bone Marrow works on the exact same principle and uses the same controls too.  There’s a difference though, you can’t just put two and two together in this game.  In this game, numbers are attached to one of three types of object:  food, swords and armour.  Try to match a food piece with an armour piece and you’ll get nowhere.  The same applies to putting together pieces that have a matching type.  Here you need to match types and numbers, do that and the number will double. 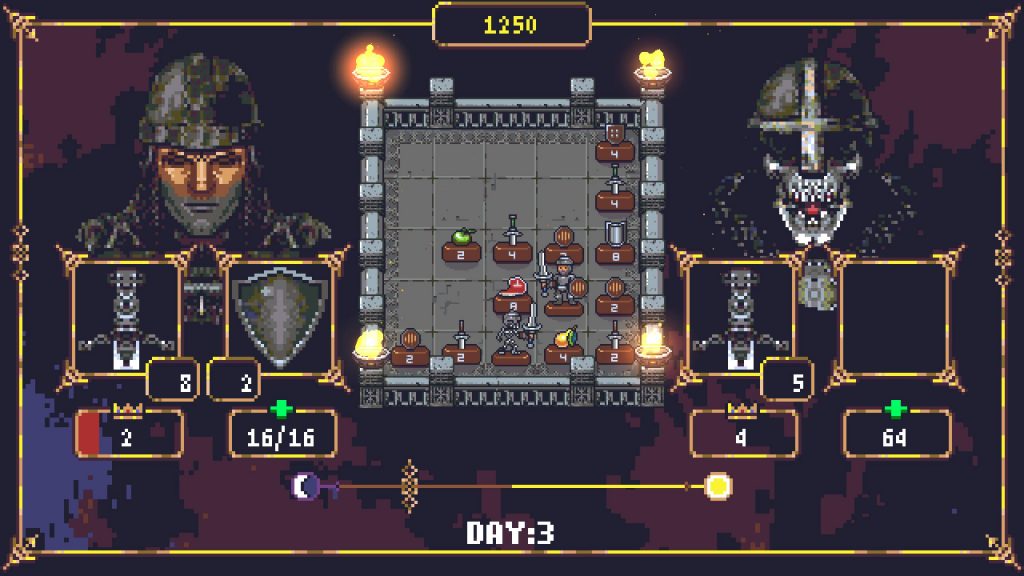 The other big difference is that your avatar, a knight, is on the board too.  The game has a day/night cycle and during the day your knight will pick up anything that he walks into.  Food will restore health points, armour will allow you to take extra damage and swords will amplify your attacks.   Occasionally an enemy will appear on the board and you can only attack them during the day.  Any moves you make apply to them too, so they’ll also pick up objects.  They’ve often got more hitpoints than you but you’ve got an advantage in that you’ll really be controlling them.

The night time sections remove the ability to pick up things as well as stopping all combat.  Why is this a thing?  Because it lets you concentrate on pushing together items to double their values without worrying about losing them to your opponent or accidentally commencing combat. 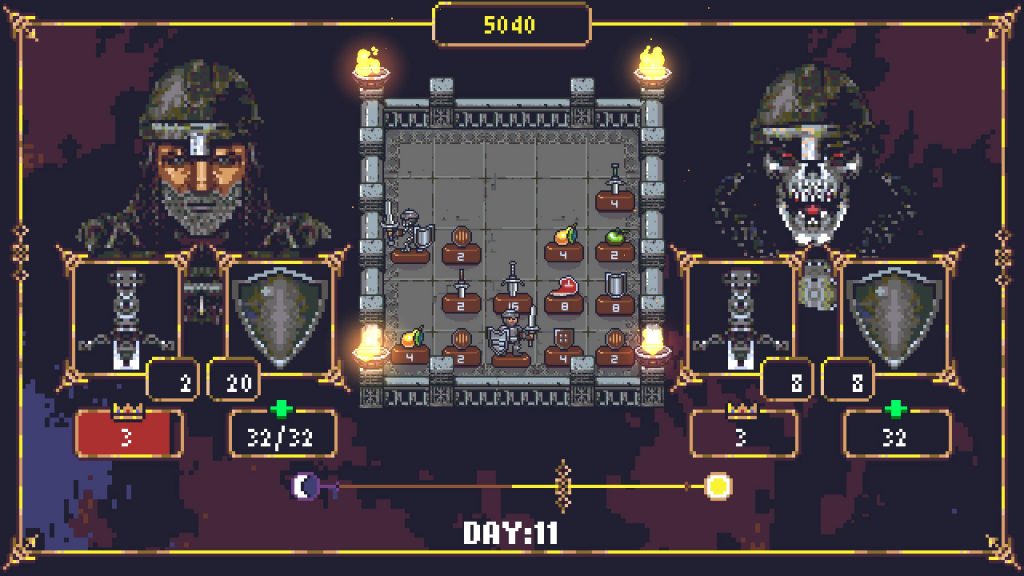 As far as core ideas go, Bone Marrow‘s isn’t all that bad.  Taking the 2048 formula and putting in some RPG-flavoured combat is a clever way to update it but Hugepixel haven’t really nailed it here.  The problem is that you’re a bit overmatched by the hardest enemies when it comes to stats and so you kind of have no option but to cheese your way past them.  Smaller enemies such as rats and snakes show up with 1HP and they’re unable to eat any objects apart from food.  So as long as you avoid them, you can run around the board hoovering up all the shields and swords for as long as you like, making you completely overpowered for the next real enemy that you face.

Aside from that, the other trick is to get an enemy in a corner, attack a few times and then retreat, pick up any objects behind you and get back to battering them.  Beyond those two tactics, there’s no real successful way to play Bone Marrow.  Playing in a more tactical way is difficult because making matches is very difficult because of the three object types and enemy sword, shield and HP stats are often far too high for you to try to face them in a fairer fashion.  And it’s not that you’re going out of your way to cheese the gameplay, it pretty much leads you in that direction. 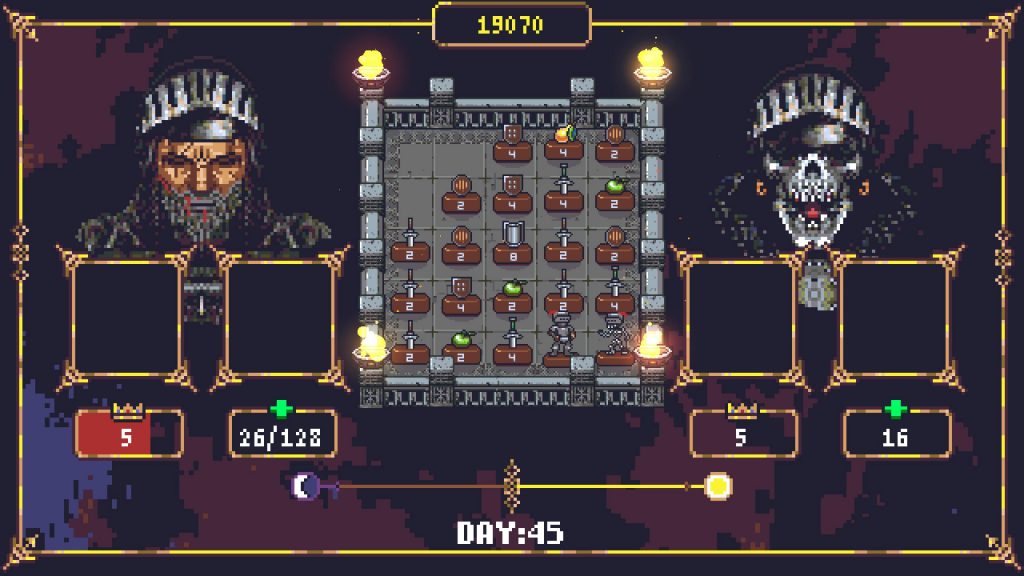 What Bone Marrow needs is a better tutorial to really get you thinking and playing in the right way, instead it half relies on you to know how to play 2048 and then tries its best to confuse you by adding mechanics that make your previous playing strategies entirely redundant.  So that’s no good.  Also, the progression in the game is odd with levels getting smaller while not adding or changing the gameplay much at all.  There’s scope within the concept to add some sort of stat upgrading system to keep things interesting but Bone Marrow never pushes the gameplay past what you see in the first few minutes.

On top of that, the Commodore Amiga-esque visuals are pretty uninspiring too, even if we did kind of like the overall look for purely nostalgic reasons.  Indeed this is one of those PS5 games that would have ran just fine on a SNES.  That’s fine if your gameplay is super dialed in but because it isn’t, this type of presentation just feels lazy. 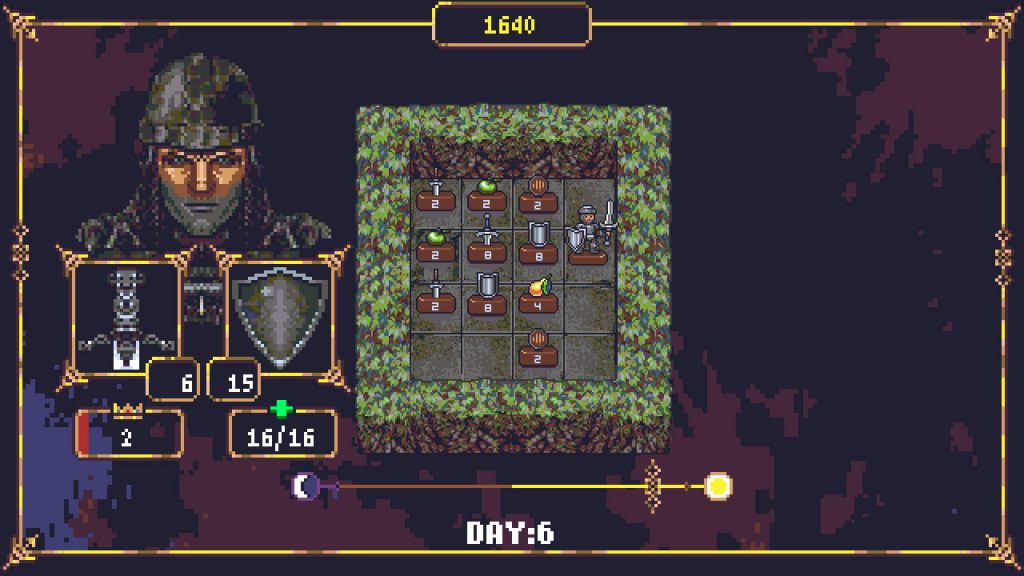 However, as flawed as it is Bone Marrow is initially reasonably playable.  It’s a shame that the 2048 aspects aren’t given more importance though.  Ultimately your score doesn’t matter and while it is nice to change an 8 or 16 shield icon, it’s so hard to make meaningful matches here that eventually you’ll forget about that gameplay mechanic and will instead just play cat and mouse with the enemy until you’ve picked up enough icons to let you slash him to death slowly while staying one or two hitpoints above him.

As ever, being a Ratalaiki joint, you’ll be getting identical PS4 and PS5 versions here, each with their own trophy stack.  The Platinum trophy is easily obtained within an hour and the game is under £4 too, so this is probably more useful to trophy whores than it is to 2048 and puzzle game fans generally.

Bone Marrow
5 Overall
Pros
+ Tries to do clever things with the 2048 concept
+ Quite playable
+ Can be enjoyable
+ Some of the pixel art isn't bad
Cons
- You can easily circumvent any real difficulty
- 2048 is way more fun and addictive
- Tired presentation
Summary
Bone Marrow is an RPG-flavoured take on the popular mobile game 2048. While it tries to update that game's mechanics, ultimately the new wrinkles to the gameplay don't improve it in any way and you're aren't incentivised to play fairly against the AI at all.