Indigo 7: Quest For Love is a puzzle game by Spanish studio Dolores Entertainment but one that offers both a fairly unusual puzzle gameplay mechanic and also a fairly sizeable story about musicians and love triangles all done in a cartoony style.  This gives the game two sides to its personality.  On the one hand it’s a very silly story with over-the-top, almost anime-style reactions with a wide cast of characters, all with different motivations, mainly to do with wanting to kiss girls.  But there’s also a fairly serious puzzle game going on here.

Of course, the worst thing about reviewing puzzle games is that you end up writing the instructions for the game and this is especially true when the game mechanics don’t fall into the usual Tetris, Puyo Puyo or match three style.  That’s the case here as this is something different to what we’ve seen before (although it is heavily inspired by the 1991 PC puzzler 7 Colors), even though it feels kind of familiar at the same time.  Your play area is made up of a mixture of coloured hexes.  You start in one corner and have to pick a colour which will make you take over any hexes of that colour as long as they are attached to your starting piece.  Further colour picks will then behave the same way but now with you having a larger territory of hexes for you to start from. 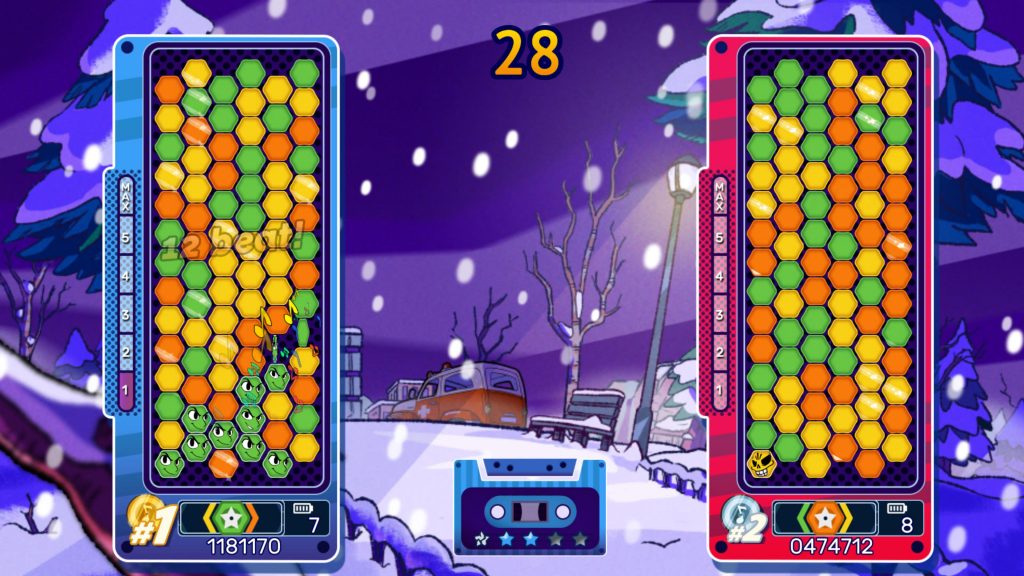 The aim of the game is to turn the whole area one colour, which is fairly straightforward to understand.  However, there is some complexity.  Firstly, there is a combo system where your score multiplier goes up as long as each colour pick converts a larger number of hexes than the turn before.  But then you also have a number of variations on the core gameplay too.  Sometimes you’ll be playing in vs. mode against two or more AI characters which adds a time element to everything.  You’ve also got modes where you have limited turns which makes things a bit trickier.  There are also modes where you fight on the same territory as opposed to having individual boards.  The variation is good though as this could get a little bit dull if they didn’t mix things up.

The core gameplay is okay but there are some issues and this all goes back to the fact that it just isn’t as intuitive as other puzzle games.  The basic idea of colour matching is fine but trying to count hexes to make sure you keep your combo is impossible especially when you are under time pressures.  Also, each level is randomly generated and the board you get can definitely make the difference between success and failure.  If you start with nothing but small matches available, you’ll burn too many moves and too much time early on.  But if you get larger matches early on, you’ll likely win. 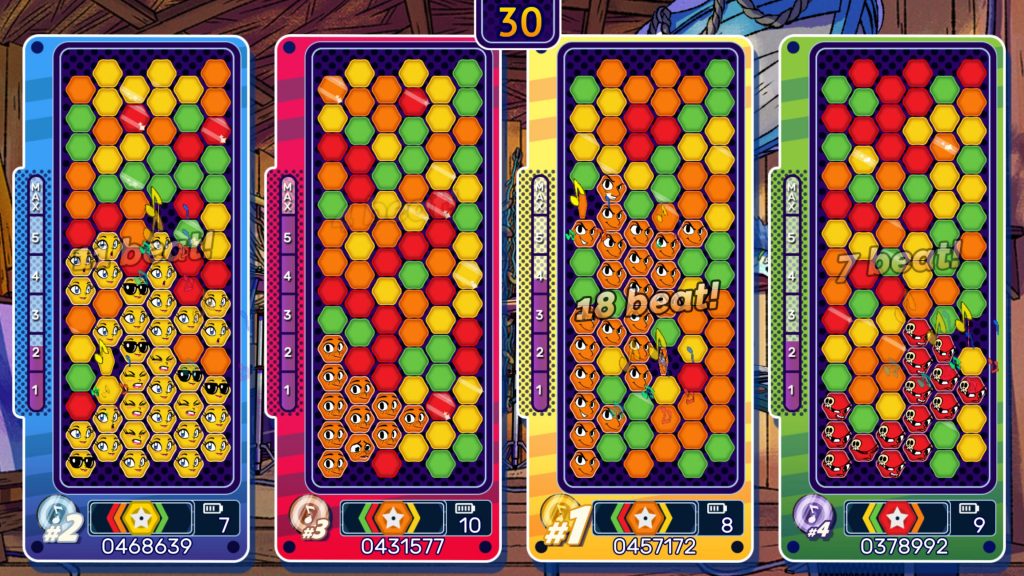 Other modes, such as the ones where you have limited moves but no time limit are much more enjoyable and balanced.  Unfortunately these make up far less of the campaign than the other variants.  Also, there are some stages that are much harder than the ones that precede them.  For example, mission two of Act Four where a new character, a vampire, comes along and absolutely dominates.  This is because this level really relies on scoring big (with combos) but this character acts fast enough to make reading the board in time almost impossible.  For us it became a huge barrier to progression (although, oddly, act 5 was way easier).

The gameplay definitely needs tweaking.  The core mechanic could be good but it just doesn’t suit being under pressure.  The temptation ends up being to just circle through each colour and play them but an energy system is in place to stop you doing that (by basically limiting the number of moves you get).  So they’ve considered that you might try that rather than balancing things enough so that you don’t need to. 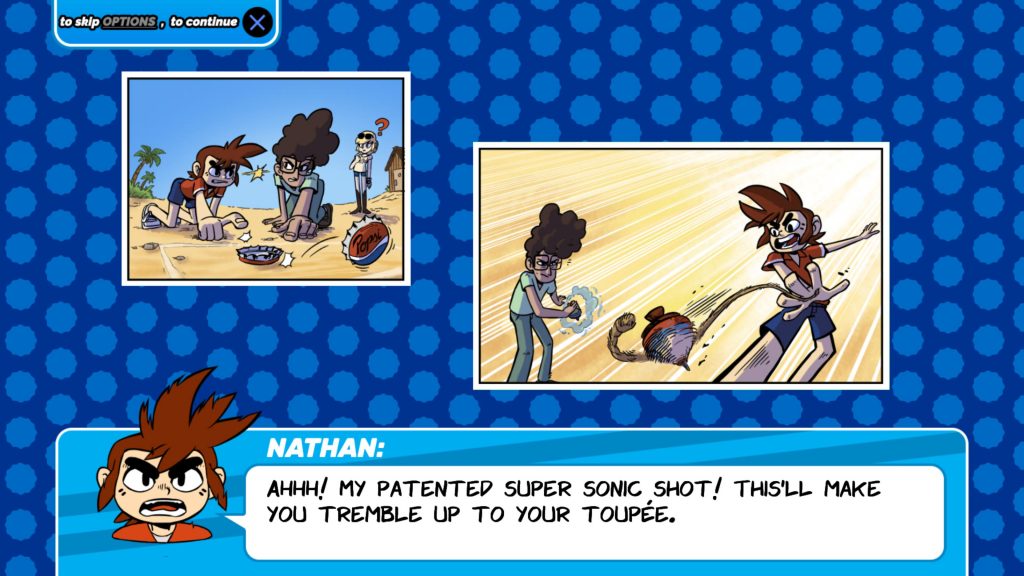 Everything else around the game is okay.  The game uses a similar presentation style to Puyo Puyo Tetris with a similar menu system and comparably clean and colourful presentation.  There’s nothing here to wow audiences and turn heads but the clean look works well.  The cartoon style plot sections are also clear and cheerful which is good, although you may tire of the story long before it really goes anywhere.  It depends on how you feel about teen dramas with over the top characters.  There’s a lot of plot to get through and we did find ourselves skipping it after a while although it is all voice acted which makes everything feel a bit more premium.

The characters in the game are all in a band and so you’d expect the music to be good and it is, with lots of tunes and plenty of variation.  The voice samples that accompany the gameplay do get very annoying and repetitive though with characters shouting the same two or three things whenever they make their moves. 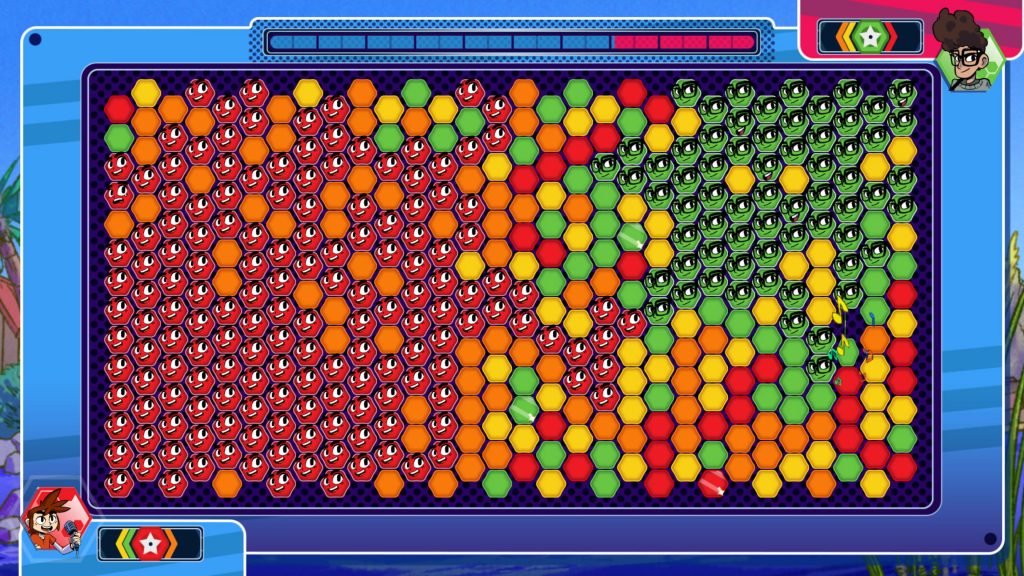 Beyond the main campaign, which has five acts each with five or more levels (32 in total), there is also a single player mode where you can play all the various modes against bots and, of course, a multiplayer mode although this is strictly offline only which is a shame, especially with the world still being somewhat restricted because of COVID.  However, for a game with so much plot you’d think they’d throw in some extras but this is really a fairly minimal product.

Overall, Indigo 7 is a well-executed puzzler that looks a little nicer than the usual puzzle games that we tend to review but for us the core gameplay isn’t great.  It’s okay and some of the variants are more fun than others but this mostly likely won’t spawn a slew of sequels or clones because it’s just never going to be as essential as a Tetris or Bejeweled and it is maybe just too thin a package to really keep people playing for a long time.  But the slick presentation, daft story and couch multiplayer may well earn the game some fans and with a patch or two, this could end up being better.  But for now, there’s not much to recommend about Indigo 7.

Indigo 7
6 Overall
Pros
+ Reasonably different to the usual puzzlers
+ Quite playable
+ Clean presentation
+ Quite a bit of story (for those who want that)
Cons
- Gameplay isn't very balanced
- Isn't set up for really clever play
- Story can feel like a distraction
- Not much content
Summary
The basic gameplay of Indigo 7 is a good mixture of lesser-seen mechanics with a traditional puzzle game feel. That said, it isn't particularly intuitive once you get past the basic colour matching and into the combo building. It's not that it doesn't work but it definitely doesn't work brilliantly. As such, the game feels like a struggle to play rather than one that is easy to play but hard to master. Some of the variations on the main mode are good though but if this was ever going to work, somebody would have made it years ago.