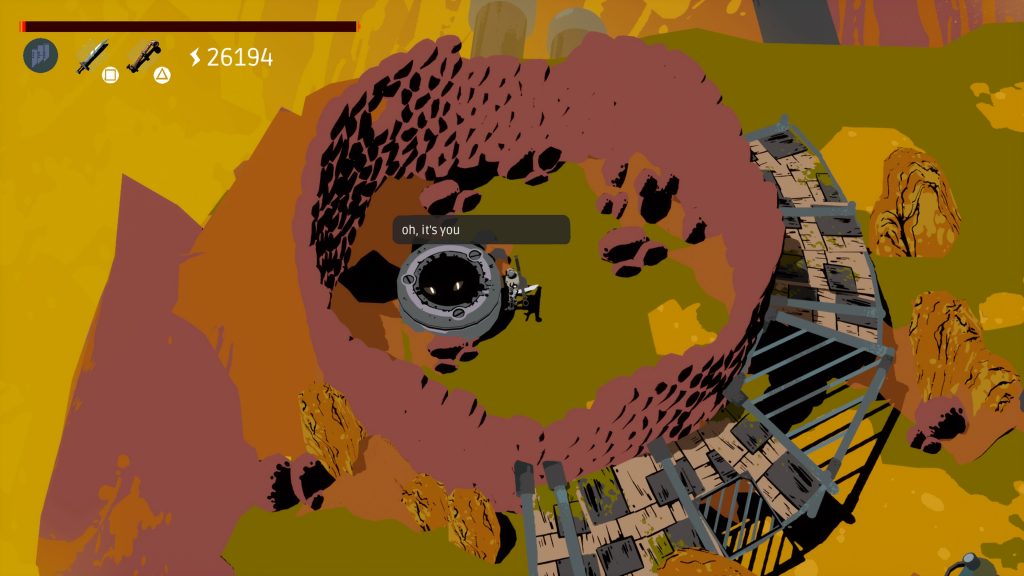 Ladies and gentlemen, meet the Creature in the Well.

It wasn’t too long ago that we were discussing Yoku’s Island Express, a charming amalgamation born out of the union between platformer and pinball action. While every indie gaming developer seemed dead set on following the retro/ roguelike trend, Yoku’s Island Express stood as an outlier, utterly unique in approach and execution, mostly down to that Pinball mechanic. So, when I first laid eyes on Creature in the Well by FlightSchool, an immediate and quite unfair comparison was drawn. It’s all too easy to be drawn into a rhetoric that dictates that one good idea is followed by many more, such is the nature of reviewing indie games, but thankfully, Creature in the Well is quite unique.

In Creature in the Well, you are met with a slightly different melding of genre meets pinball, this time you are a dungeon crawling robotic engineer known as Bot-C. The local town of Mirage has been hit with a never-ending sandstorm that has laid waste to the area, coating everything in an arid desert that stretches out for miles. In the heart of mountain is a machine which regulates the weather, knocked out of commission by the titular Creature, who has wreaked havoc on the town and the mechanical engineers that kept the weather machine running. 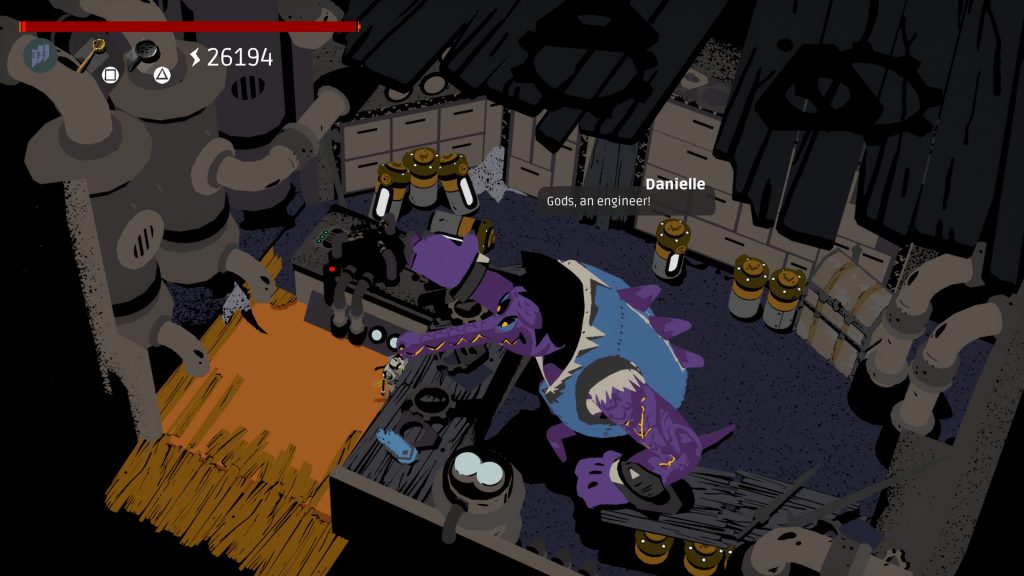 Exploring each area fully will net you upgrades which you can use to increase your ball hitting power.

It’s immediately arresting, despite having no major cut-scenes or plot stings that would otherwise litter AAA games as Creature in the Well is a purposefully solitary experience. Bot-C is mostly alone throughout the entire adventure, with only the murmurings of Mirage inhabitants whispering as he runs through the hub area and only three NPC’s to interact with. The minimalist visuals and audio accentuate this, with only a different palette of colour providing any indication of progression through the various wings of the facility you need to bring back to life.

In truth, the only real character that truly interacts with you is the titular creature. He exists purely to impede your progress, manipulating stages as you move ahead, taunting you from the shadows and pulling you out of the facility if you take too many hits. This characterisation is remarkably effective, pitting you against an enemy that is not only a constant presence, but one you must fight and evade consistently to achieve your goal. It has a setup that feels like a Saturday morning cartoon with the hero pitted against an ever-returning foe that only gets angrier as his scheme is foiled week in, week out. 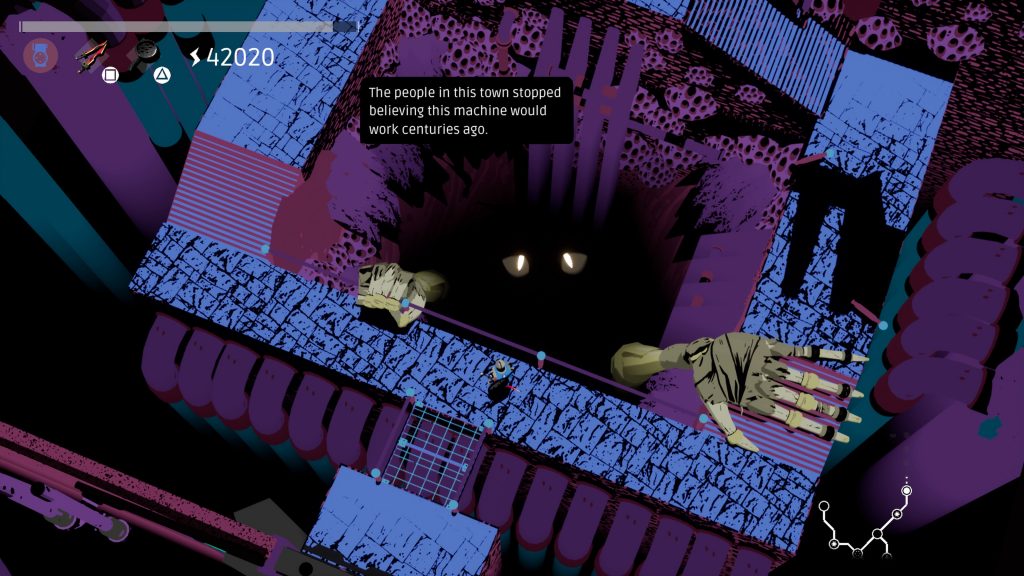 Where Creature in the Well really excels is within the mixture of the Dungeon Crawl and Pinball elements. It sounds like a merge that shouldn’t really go together, but in action feels superb. Your main method of attack and clearing puzzle is with energy balls that are generated from certain points in the ground. A hit of the Triangle button whacks the ball toward the many obstacles and bumpers that you encounter lying around. Hitting these bumpers generates energy which is used as a currency to progress through the twisting halls of the facility.

Shortly after starting, you also pick up a charging sword, this allows you to pull a ball in motion toward you and charge up the power and aim of the shot. This is where the strategy of the game really comes into play. With this charge sword, you have a greater degree of control. This protects you from incoming turret fire that you can turn into more energy balls, weave the energy balls through or around harmful obstacles and protect against attacks. It’s simple, but effective and with the chaos that can be happening on screen at any given time, you don’t really need much more to keep you occupied. 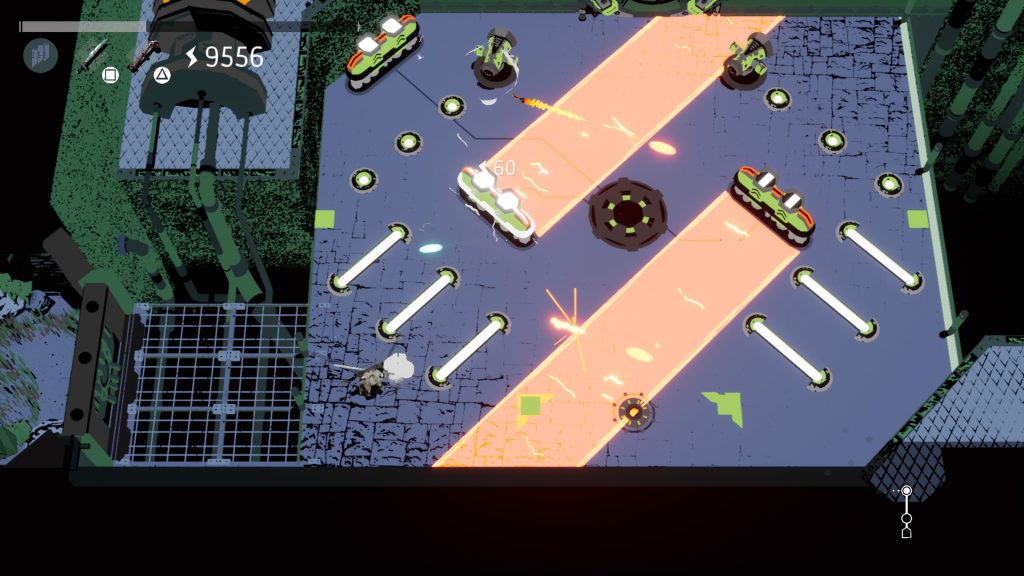 An example of one of the many rooms that can be encountered in game, with multiple hazards and deathtraps

There is variance however, throughout each stage of the game you can encounter secret areas that feature a new weapon you can use, whether it be a charge or striking weapon, allowing you to customise BOT-C to the point where the unique challenges of each area can be overcome with slightly more ease. A good example of this is the twin-blades which allow for more accuracy, allowing you to pinpoint the travel location of the balls to thread through multiple bumpers for higher energy gains. While not always useful, these become a lot of fun to seek out as along the way with the minor risk of losing the energy you need to open another doorway in favour of an unseen reward. You’re never too far from more however, so it lets players have fun with exploration.

Despite all these tools at your disposal and the relative simplicity of the control, Creature in the Well can be quite a daunting game, especially at first. The sparse, minimalistic audio and graphics give off a sense of foreboding and danger throughout and the game itself is quite unforgiving, with the creature throwing you out of the facility when Bot-C loses all his health. It doesn’t help also that the minimalist worldbuilding just throws you into this, without so much of an introduction or anything more than a light text tutorial. It took me a fair amount of time for example to realise that there was a healing pool straight inside the facility hub, meaning that I was running into each stage with zero health after the last defeat. This led to a lot of early frustration and it wasn’t until I saw a healing pool later in the game that I realised that this is what the glowing water did. The game is also genuinely challenging, with the Creature in particularly giving me a hard time at the end of each stage as the area boss. The challenge ramps up quickly, with dangerous obstacles, turrets and exploding nodes that will sap your health in no time. 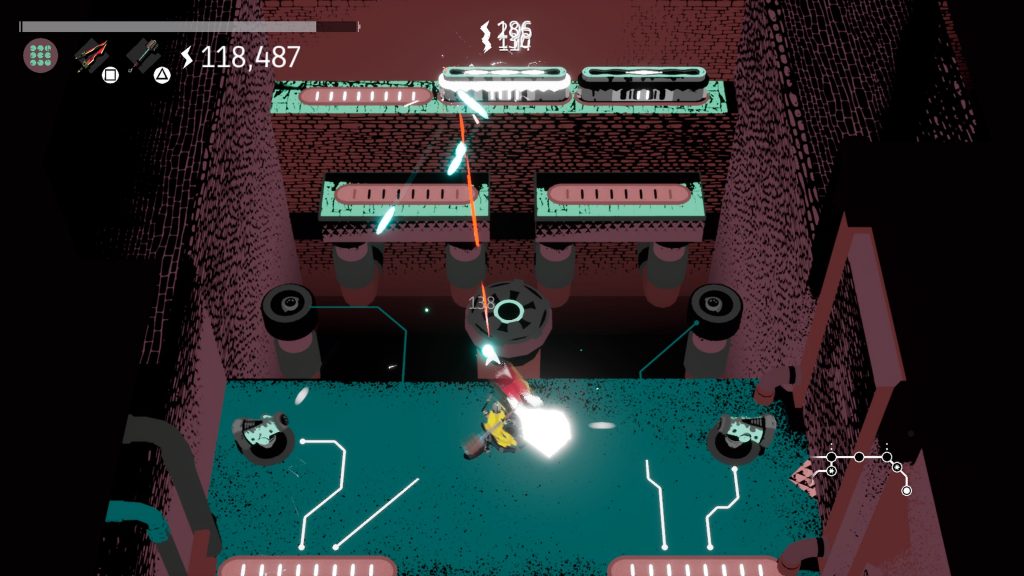 Thankfully however, it is not an impossible game, far from it. There just isn’t much that takes the sting away from defeat. You can only really try pushing forward in the game as while there is a hub town to visit, you can’t really do anything there. It would have been nice if there was some more world-building as Mirage and its inhabitants are genuinely quite interesting, It’s a shame that you can only meet two of them and distract yourself from hitting balls for a moment.

This lack of world building contributes to the sense that what you are doing is quite repetitive. Even for a five-hour experience, it can be felt with some rooms mimicking ones that you have seen from previous stages, the same secret setups and the only main characters being yourself and the Creature. Thankfully, this isn’t a death knell for the game as it remains a unique, challenging and fun game. What hurts it overall is that it could have been just that little bit better.

Creature in the Well
7 Overall
Pros
+ Unique mixture of the Dungeon Crawler and pinball genre’s
+ Colourful and artistic visuals
+ Minimalist yet effective audio
Cons
- A bit too repetitive for the short playtime
- Occasional graphical glitching
- Doesn’t go far enough with the worldbuilding for my liking
Summary
As an utterly original take on both the Dungeon Crawler and Pinball genre’s, Creature in the Well is a fascinating adventure with stark visuals and soundtrack to match. A few minor details such as the sparse story and repetition do not take away from what is a unique experience, but these aspects may leave you wanting more than what is on offer.