Originally a Kickstarted project for PC, Hover has arrived on PS4 and promises an open world, free running game inspired by the likes of Jet Set Radio and Mirror’s Edge. Looking at the screenshots you can probably tell which influence is stronger, but can the developers at Fusty Game turn their love for a franchise into a good game? 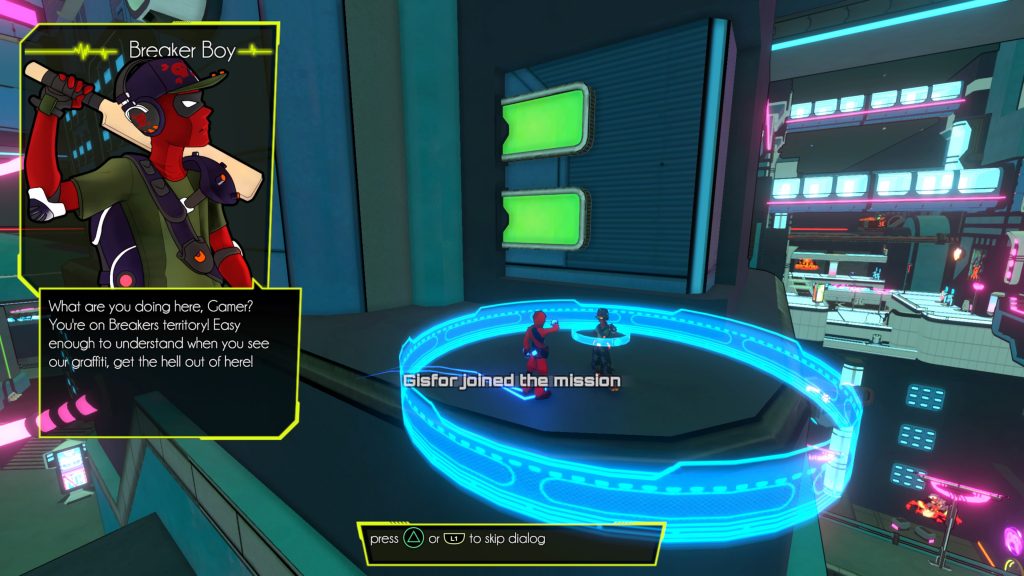 You start by creating a gang and a character. You only have a generic male or female to start with, but there are others in the list for you to unlock as you play through the game, each with their own starting stats which can be upgraded as you level up. You can change the name, height and colour scheme and then you’re thrown into the tutorial. Here you’re given the basics of the story and the gameplay.

2D character panels talk to you and these are decently drawn, though the writing has obviously been translated with plenty of awkward phrasing and mistakes. You’re a clone and you’re being recruited to The Gamers, a gang trying to take down the government who have banned video games. A suit gifts you and The Gamers the ability to perform free running tricks with ease like grinding, wall running and insane jumps. Once out of the tutorial area you’re thrust into the Haven District, a very large starting location and basically allowed to do whatever you want.

There are missions and some will continue the story which will unlock new areas and ultimately lead to the end of the game, but Hover is very much an open world game. There are many checklists to tick off, from things to collect, propaganda to destroy or spray graffiti over. Each area is broken up into smaller sections and each of these has their own list of objectives to complete. You could go straight to the nearest mission giver, and you probably should as you’ll still have a lot to learn (the tutorial is a little on the basic side), but you could also just try and scale a building or start performing tricks over gaps, combining rail grinds and the like. 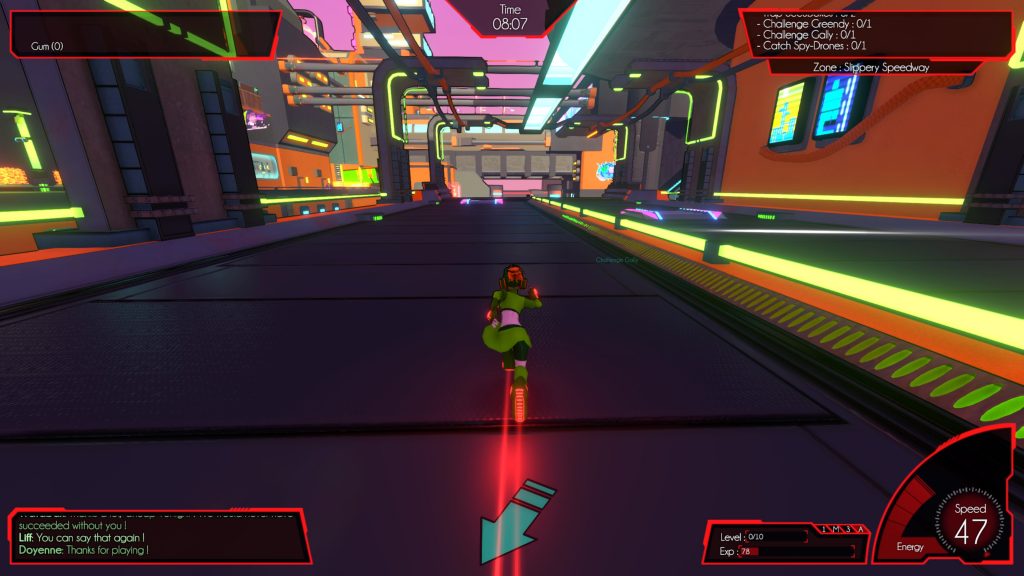 You can do all this whilst connected online, including cross play with PC, so you’ll see other characters doing the same and once you activate a mission other people can join you before you start the mission proper. It can be quite cool to see people jumping around and performing tricks just ahead of you but like Absolver at launch, though not quite so bad, as people jump in and out of the world there can be a stutter which for a game about speed and technique can have an impact on your gameplay.

The game doesn’t work perfectly anyway. There are two options for graphics, Fluidity and Graphic. Having the screen stutter a bit on Graphic (this was offline) I changed to Fluidity but things weren’t much better and there is an obvious drop in the graphical quality to boot so I changed back to Graphic and dealt with the performance. The camera can have issues at times as well but although I wish it was better it was never a massive problem. You can play the entire game in first person if you prefer. Design-wise things are nice and colourful and each section of the world is packed pretty tight with buildings that reach high into the sky, rails to grind along and nooks and crannies to find collectibles. The characters aren’t a patch on their inspiration but are original and well designed in their own right.

If you do decide to tackle a mission then they come in a few varieties. Races have you running through checkpoints, usually doing laps, against an opponent. Sometimes you’ll be doing the same but against the clock. There are Gameball matches which require you to pick up a ball and throw it into a marked area on the wall whilst your opponent tries to do the same. In a team situation you can throw the ball to each other rather than go it alone but with AI it’s best to get on with it as they struggle. There are also missions similar to Gameball which involve picking something up and taking it to a destination but against the clock rather than trying to outscore your opponent. 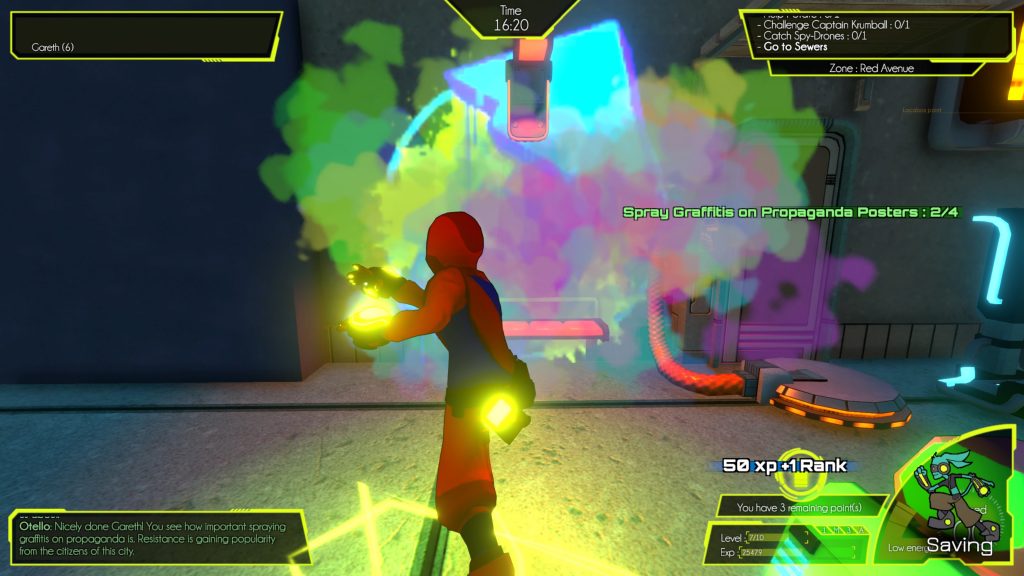 Beyond the odd score challenge that’s kind of all the variety you get. There are a couple of long stealth sections but they aren’t missions per se, rather entire areas that you have to be careful in. I hated them. Alarms can be triggered by cameras, laser fences or pressure sensitive floors and they summon a police presence. Sometimes it’ll be a flying robot and sometimes it’ll be someone on foot like you, but if either of them catch you then you’ll be teleported to a location to think about what you’ve done. Get caught three times and you’re sent to prison. You can break out easy enough but what it does mean is that wherever you were, whatever you were doing, you’ll have to work your way back there. The final mission in the game is set in one of these areas and you’ll probably be completing the first section of that a few times due to getting caught.

There are cameras in the more open areas too and I feel they just get in the way of the free running, you know, the fun part of the game. You can be running a race and if the course passes under a camera you better be careful or your race might be ruined. I get why the police are there from a story point but from a gameplay perspective I could really do without them.

I would actually say I had the most enjoyment from Hover after finishing the game. I still had some missions to do but I ignored them and concentrated on collectibles so I just went around each area trying to clean up. By this point I’d figured out the mechanics of the game so was running around and getting about with some style and by ignoring the missions I was getting less frustrated. I’d also turned off the music by this point which I’m sure the developers didn’t intend. Hideki Naganuma of Jet Set Radio fame provided some of the music and there are two or three tracks that would fit right in with that game, but the rest of the tracks aren’t as good and are quite repetitive. 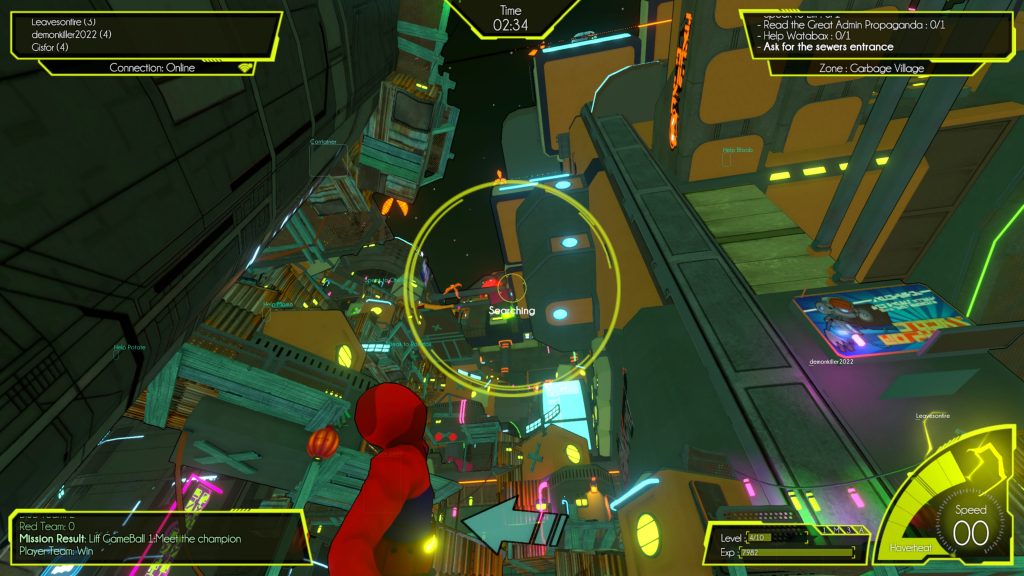 By ignoring the missions I could also ignore the UI which is very bad. You can hold

to scan the environment and missions will appear as faint boxes but picking them out of the environment, especially the specific one you want, is painful. When you start a mission you’ll need to spend a brief moment figuring out what you’re supposed to be doing as the game doesn’t give you an objective. There is an arrow at the bottom of the screen that will point at your next objective and it’s very difficult to read. There is a map but it’s worse than useless and arguably the worst thing is all menus are navigated with a mouse cursor controlled with the left stick or touch pad, even though they could all use the more common box selection of almost every other console game. Sometimes it felt like the UI was designed to hinder the player rather than help them to make progress.

So it doesn’t live up to its inspiration then. Jet Set Radio has probably aged some but its style, music and arcade fun still shine. Hover has created some attractive environments and the free running, although it takes some getting used to, is a lot of fun and adaptable. The UI and mission structure leave a lot to be desired however and the inclusion of stealth is a misstep. Being able to play the whole thing online is a nice touch but I’m not sure it adds too much and other parts of the game would have benefited from more attention. 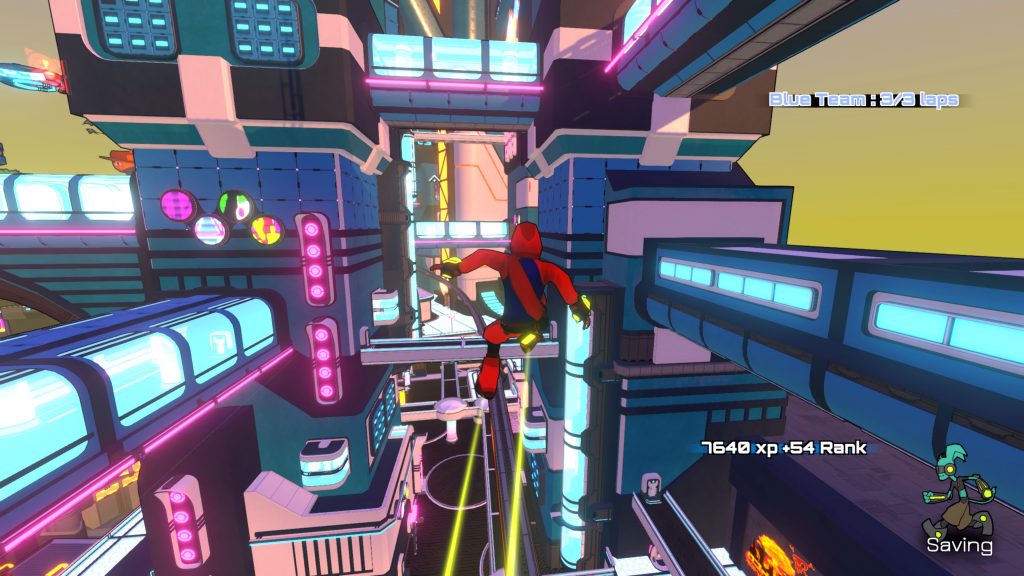 If you’re the type of player who can get lost in side quests in an open world game then Hover might offer something for you. If you love free running around a city then all the better. If you’re looking at the screenshots and thinking this must be the next Jet Set Radio then you’ll probably be disappointed, though this might be the closest we ever get.