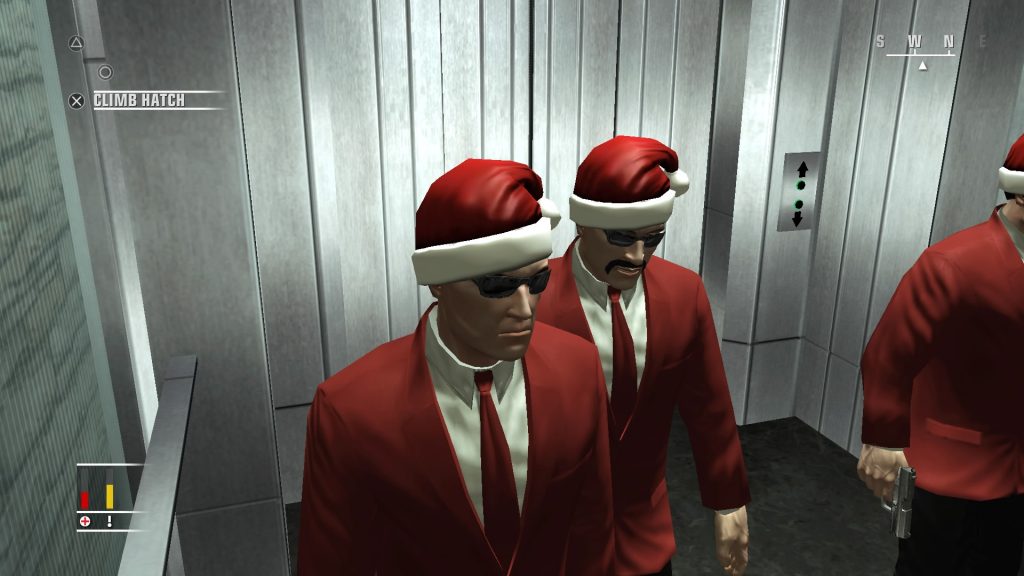 Both games boast an improvement in resolution and sharpness. It’s noticeable when you stack them side-by-side with the Playstation 3 versions but the gap is a lot more negligible when compared with the PC versions available on Steam. The improved lighting seems a lot more prevalent within 2006’s Blood Money. It shows its age more when it comes to textures popping in. You’ll notice it more in New Orleans’ heavy crowd scenes and the opening vineyard level. It’s disheartening to see people and objects flicker into existence and reminds you that this game is over 12 years old.

Other than that, it’s an improvement but not dramatically different from previous releases. Both games boast a solid 60fps frame-rate and Absolution‘s more polished visuals hold up to a lot more scrutiny. Blood Money‘s levels can sometimes look a little flat but they make up for it in scale. How they play remains much the same as well. Improved controls have been touted in this package but, if it’s there, it’s subtle. Admittedly, I haven’t seen either game running in 4K. 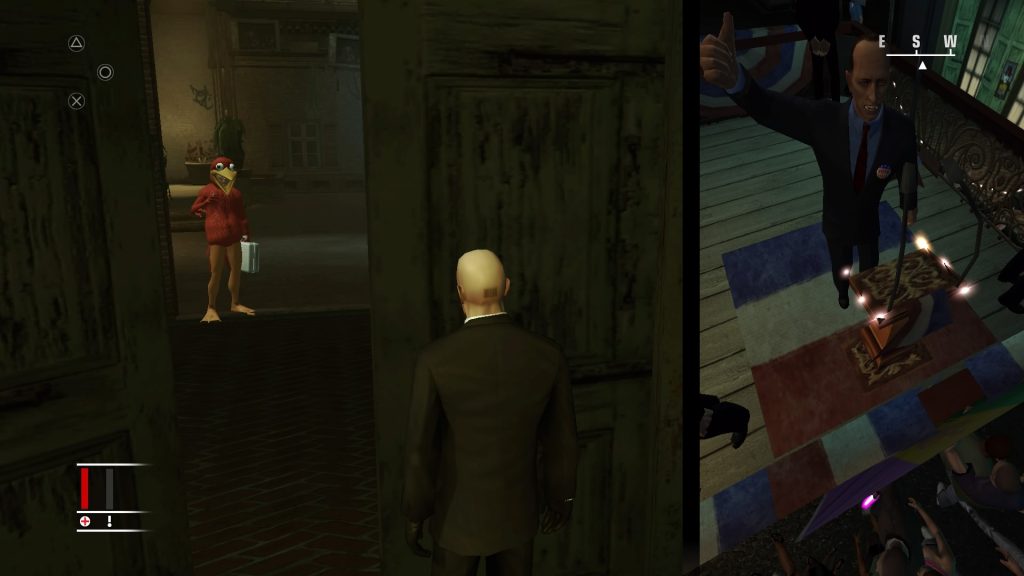 As a Hitman fan, I might have expected something more, especially for the full price tag. I’d consider Blood Money a classic and the first time the series really hit its stride for me. The social stealth which is synonymous with the series is strongly represented and realised as you grab disguises and hide in plain sight. The scale and sheer moving parts can still impress as clockwork AI’s go about their business.

It’s been fun going back to those old haunts in new guises and sneaking into corners of the map I’ve rarely touched. The detection mechanics are consistent enough for you to learn where your limits are and there’s plenty of feedback when you head into hostile areas. It’s a game packed with some memorable locales and hits and you’ve got a lot of options for your approach. Io have since carried this to their recent Hitman games but I always felt Blood Money was where the formula was first executed really well. You’re left to your own devices to poke around and experiment with the environment and your weaponry and the game is quite happy to give you time to think. 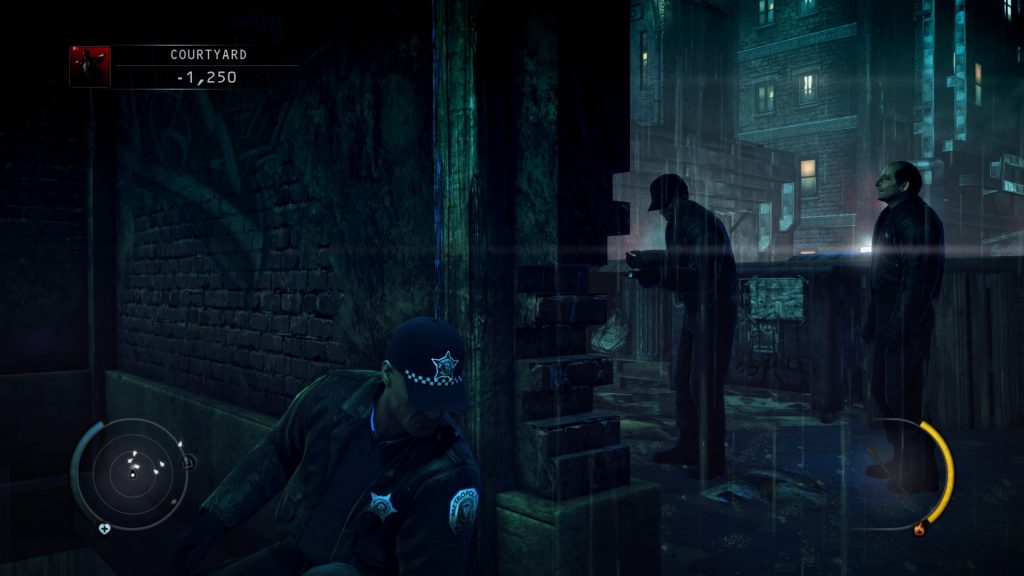 In contrast, Absolution carries a lot more visual polish but feels like a much more guided, restrictive experience. Rather than a globe-trotting clip show, Absolution represents 47 as a fugitive. As such, the stealth on offer is a lot more conventional. You’re sneaking more behind cover and having to treat guards as real threats. Disguises still act as ways to access parts of the level but you’re always treated with suspicion. Feedback is still consistent and you’re usually aware of whose eyes are on you, but a new set of clothes is no longer a safety net.

It’s jarring in comparison to Blood Money‘s more freeing design. Absolution rarely lets you relax. The instinct vision mode that finds it’s way to today’s iterations, had an auspicious start here. You use it to find threats, point of interest and blend your way past opposition. It’s a limited resource but you can replenish it with sneaky actions. Falling foul of an empty instinct bar still feels at odds with what the series has done before and since. So you look to hide, crouch and break line of sight just to get by.

I still enjoy playing through Absolution‘s rollercoaster. It has some really great moments. They don’t last nearly as long but some become really intense as the police attempt to track you down. It feels like a game hampered by the Hitman name and reputation. Even when a more recognisable hit comes to fruition, they take place in arenas that lack the expansive qualities of the series. Your options seem limited and simplified and, one or two aside, they tend to disappoint. 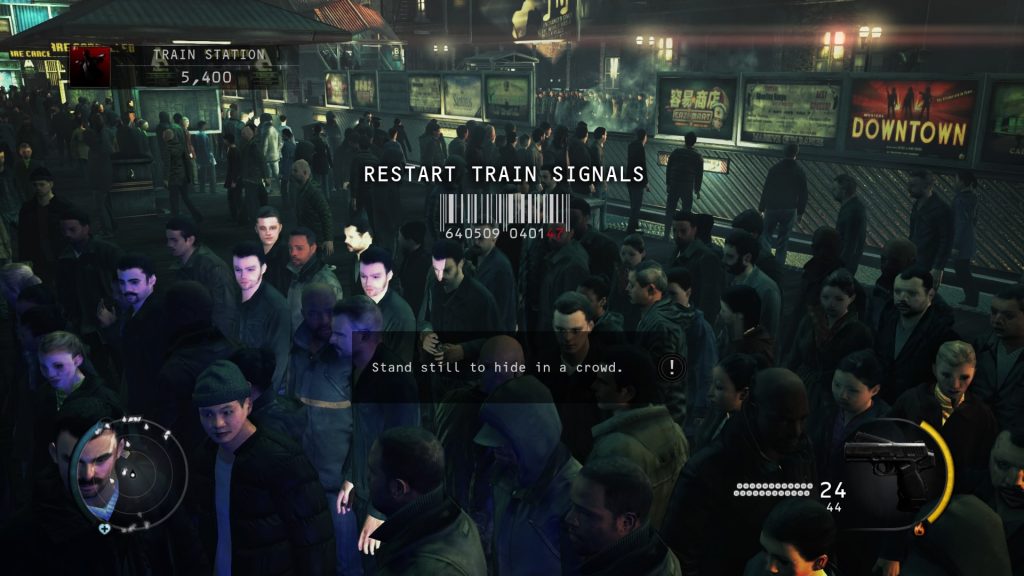 It represents a tonal shift, too. The grindhouse aesthetic looks great visually but the writing sometimes appears crass and the villains often appear bumbling or just plain crazy. The high society interludes of the previous games disappear for a sleazy underbelly that just doesn’t let up. 47 is given more emotional motives and there’s more dark comic stings but, the plot and characters just don’t land for me. Not that plot’s been the series’ strong point.

Coming back to these two games has really reminded me of just what a pivotal time it was for the series. Blood Money perfected the ideas of what came before it but there was a sense, at the time, the series maybe appearing stale. Absolution felt like a response to that criticism with it’s more cinematic, claustrophobic presentation and locales. It sticks out so much more with the two recent games returning to the Blood Money blueprint.

Hitman HD Enhanced Collection
7 Overall
Pros
+ Sharper visuals than previously before.
+ Blood Money's level design remains top notch.
+ Absolution's moody environments look great.
+ Two very, very different takes on stealth here.
Cons
- Some texture and object pop-in are present in Blood Money's levels.
- Absolution's load-times remain a touch too long for my liking.
- The price tag is too much for what's on offer.
Summary
As a remaster, Hitman HD Enhanced Collection does deliver the best looking edition of these games to consoles but there's a sense the price is hard to justify. If either of these titles are missing from your Hitman collection, it's worth a look. I've had fun and found myself nostalgic re-examining these two titles. I can't deny it's a difficult package to recommend to veterans unless they really, really want to see a sharper image.